Notes from a trailing spouse: Drunk in Ireland and fearing for fabulists everywhere

In the land of blarney you feel the dread most acutely. Is there any future for harmless exaggeration after Trump? 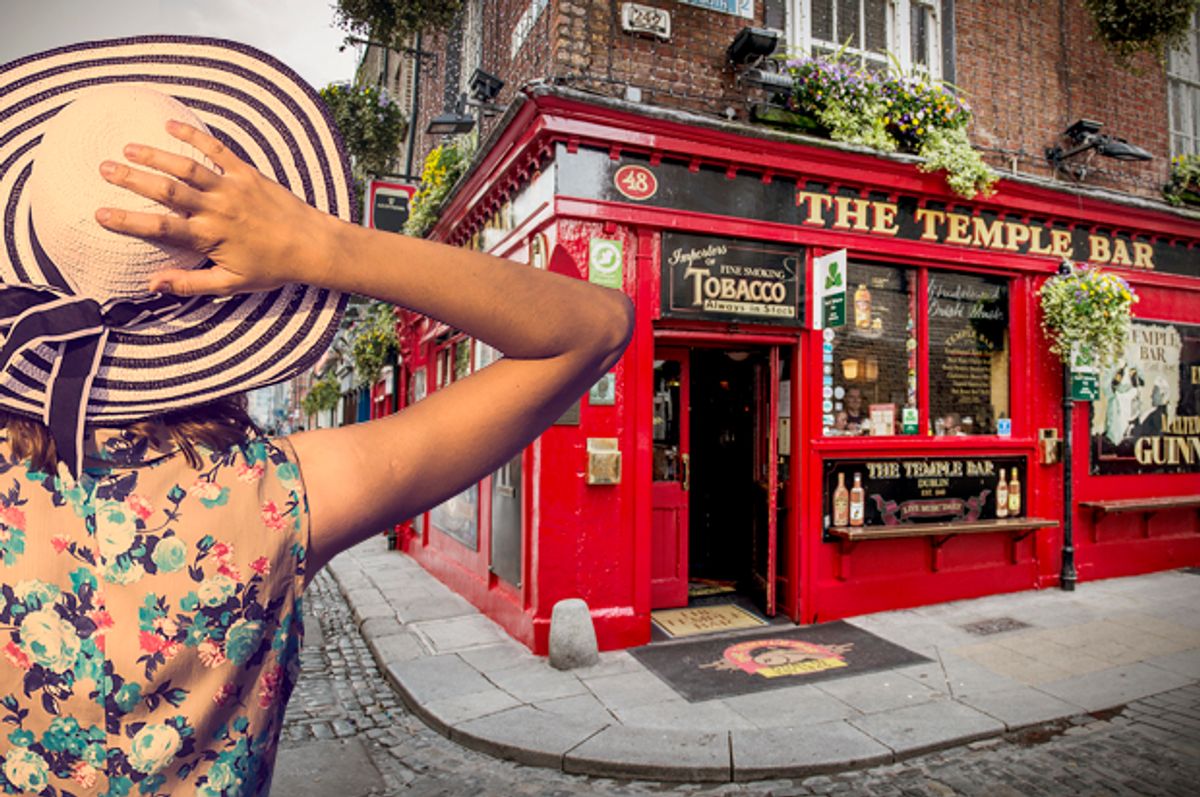 I was in a pub last night in Dingle, Ireland, where my husband and I have pitched up en route back to New York for the summer. You can’t just leave a city as other to me as Abu Dhabi and set foot in Trump America for the first time since he stole into office without stopping in the perfect place to get blind drunk. Anyhow, with a pint in hand, I had one of those staggering revelations that only the stupidly inebriated have, which was: Of all the terrible things Trump has done, the worst, for me personally, is he has ruined the art of exaggeration and the harmless white lie.

It seems every time he opens his mouth he mangles the time-honored tradition of taking a flat reality and giving it a tiny boost. How ridiculous was his Muslims dancing in the streets of Jersey after 9/11? His Mexico sending over all its rapists and killers? His inauguration claim about the numbers in attendance? They go on and on, too many to count, and each one more absurd than the next.

Everyone lies. To themselves. To others. Scientists of the brain have even figured out it is part of the biological imperative, a way for us to battle and control the onslaught of being conscious. In fact, it is what makes us human -- that and opposable thumbs.

I know any sort of lying is considered one of the deadly sins; at least, people behave as if it is. But to condemn all lying is about as productive as calling kids out for "playing with themselves." It isn’t evil if there’s an understanding of why you’re doing it, if it is to protect feelings and be kind to others as opposed to just being self-serving.

I don’t want anyone to feel bad that I never had any interest in children, or God for that matter. So now I’m the poor woman born without a uterus. As for God, I blame my misguided parents and their commie past, something, now that I am surrounded by God-knowing people, I am striving to overcome.

And I felt okay about those lies. Then came Trump. What a fucking buffoon! Who lies like that? No finesse. No art.

At this point, I slammed down my pint and, this being Ireland, everyone turned. It was obvious I had something to say. “You great citizens of the land of blarney! Are you going to let some pampered rich kid, some moron of the highest order, a ‘Cheeto Apocalypse’ as my friend Deb calls him, shit all over what is our birthright?” (I’m of Irish decent, if you hadn’t already guessed.)

“Get her another drink,” someone called, “She’s onto something big, need I say HUGE?”

I waited, my thoughts gathering, taking shape, while the barman pulled me another pint. The crowd was now hushed in anticipation.

“What if Donald Trump and his bald-faced lies not only kills America’s standing in the world?”

Truth be told, no one gave a shit about that except for one kid from Milwaukee who was backpacking through Europe.

“But,” I continued, “ what if he also becomes omnipresent? Hear me out. Just imagine for one second that you are, say, Saint Patrick. Good trick to claim you got rid of something that was never here in the first place, and it made people feel safe knowing the nonexistent snakes had been banished. But if Trump had been alive then, his brand of lying would have wormed his way in; you would have stumbled in the telling, your confidence undercut. You’d hear his high-pitched whiny voice. You’d hear his blatant boring narcissistic boasts: I’m the best, I’m the greatest, I’m the hugest.”

“He’s the biggest fecking prat, that’s what he is,” the man next to me said, his turn now to slam down his pint.

“Exactly,” I said. “Isn’t it our right to live by narratives of our own making, not for nefarious reasons, not to hurt people, but to lift up the ordinary, to make poetry, to make life a work of art? Now, my friends, there is a terrible threat that that fecking prat will infect all of us, he will get in our heads, our stories, our exaggerated beings and, I gotta tell you, to me? That feels like the end of the world.”

There was a general rumpus of agreement and the crowd at the bar broke up into small groups, the mood now a bit dour.

My husband and I left soon after. We walked home in silence; the only sound was the grunts the two of us made as we violently flung ourselves up against the hedgerow whenever a car hurtled past. Safely back in the sweet cottage we had rented, we lit a fire and, because of the time difference and work commitments, we each retreated into our computers.

As coincidence, or luck, would have it, just as I left the Middle East, Trump and his family arrived in Saudi Arabia for his first foreign trip since becoming president. Watching him disembark onto the tarmac, I had this terrible feeling. “Oh my god,” I thought, “he’s out there! He’s like a virus gone rogue.”

Right then, I wanted to open the window and cry out into the night, “Take heed all you storytellers, white liars, you artful exaggerators, you must fight, fight to protect yourselves.”

But when I saw him start to dance with that sword in his hand I feared it was too late. The future is set. There is no truth, and soon there will be no good lies either.