David Brooks wants you to have sympathy for Jared Kushner 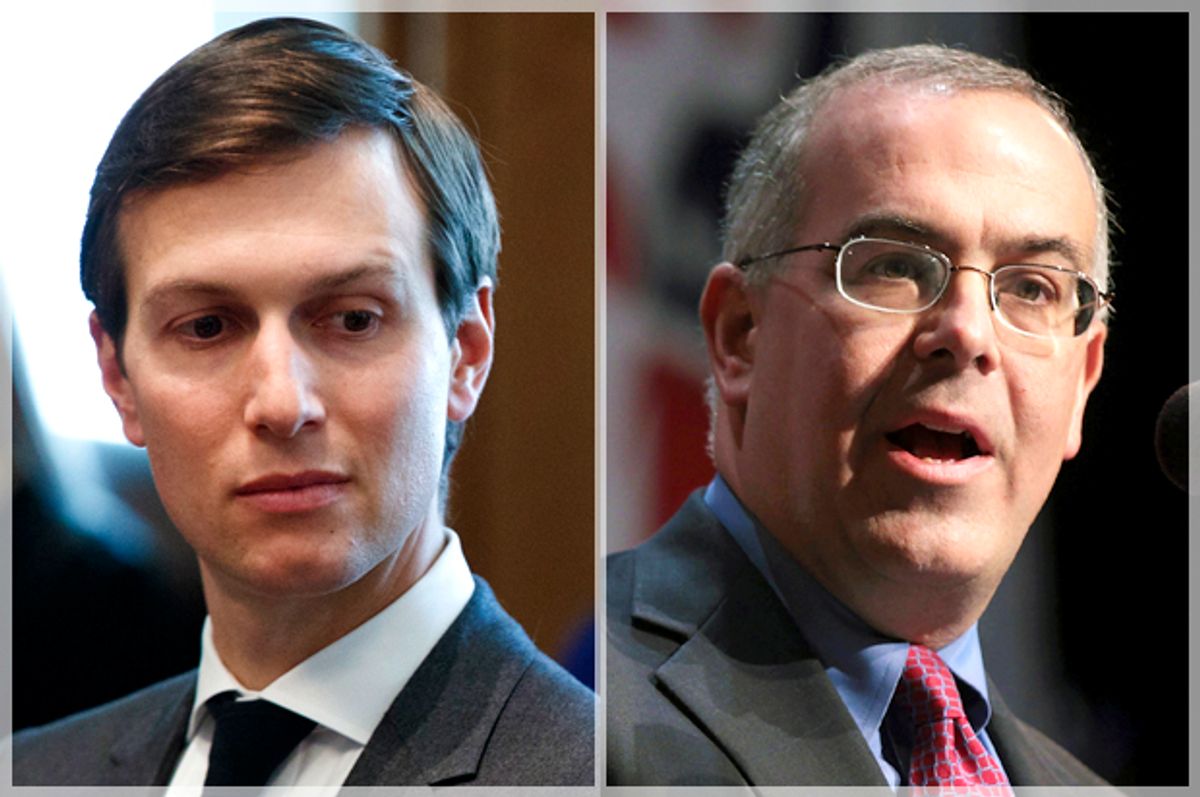 Jared Kushner, President Donald Trump's son-in-law and top adviser, is in charge of many things: "innovation," Middle East peace, soothing things over with Canada and Mexico after the president flies off the handle and creating back channels with Russia to discuss things outside the scope of oversight. And that last one may be getting Kushner in hot water.

While many analysts in Washington are alarmed over the recent revelations — a Foreign Policy contributor wondered whether it was "time to talk about treason" — New York Times columnist David Brooks is more apt to describe it as a youthful indiscretion of someone who has "been thrust into roles he's not ready for."

Brooks is writing the wrong story, though. The current scenario is not about Kushner's falling short of "working within legal frameworks and bureaucratic institutions" — certainly the nicest way possible to say "breaking the law." Brooks should be writing that Kushner is a failure because his entire career has been about failing.

And Brooks wrote that "Kushner seems to have been fiercely, almost selflessly, loyal to family." That would be the same family whose patriarch, Charles Kushner, hired prostitutes to have sex with his brother-in-law and film it in order to prevent him from testifying in a federal case about false tax returns and campaign finance reports. Charles Kushner pleaded guilty to 18 felony counts.

In other words, Jared Kushner is the son of a crook.

Why Brooks glossed over that, I'll never quote know. And why that nugget was buried far below Kushner's grandmother's Holocaust struggles is not certain.

But the fact is that Kushner — the son of a crook — is a failure. And Brooks doesn't want to admit it.

Kushner, described by employees at his high school as a "less than stellar student," was accepted to Harvard after his father — then not a felon — gave the school $2.5 million.

"Jared’s brother was very young while all this happened and has since gone on to a fantastically successful independent career," Brooks wrote. That would be true, but his one big purchase — a skyscraper he paid $1.2 billion for — was something he "vastly overpaid for," Brooks wrote, noting that it has "been a financial albatross ever since, one reason Kushner has spent so much time looking for Chinese investors, and possibly Russian ones."

That doesn't seem "fantastically successful independent career." After all, here's a kid who inherited his family's fortune at 26, pretty much squandered it trying to go big, and then may have tried to develop back-channel relations with Russia in order to tap into the Russia-Trump money pipeline and save his daddy's company using his daddy-in-law's connections.

Where the story focuses on "clannishness" and "boneheaded blunders," maybe it should instead be on the guy who has a major lack of personal responsibility. That's a topic Brooks could tackle in his sleep.