“Do it harder”: The right-wing backlash behind the brutal lashing of gay men in Indonesia

Though homosexuality is legal in Indonesia, in the Northern province of Aceh gay men are publicly flogged 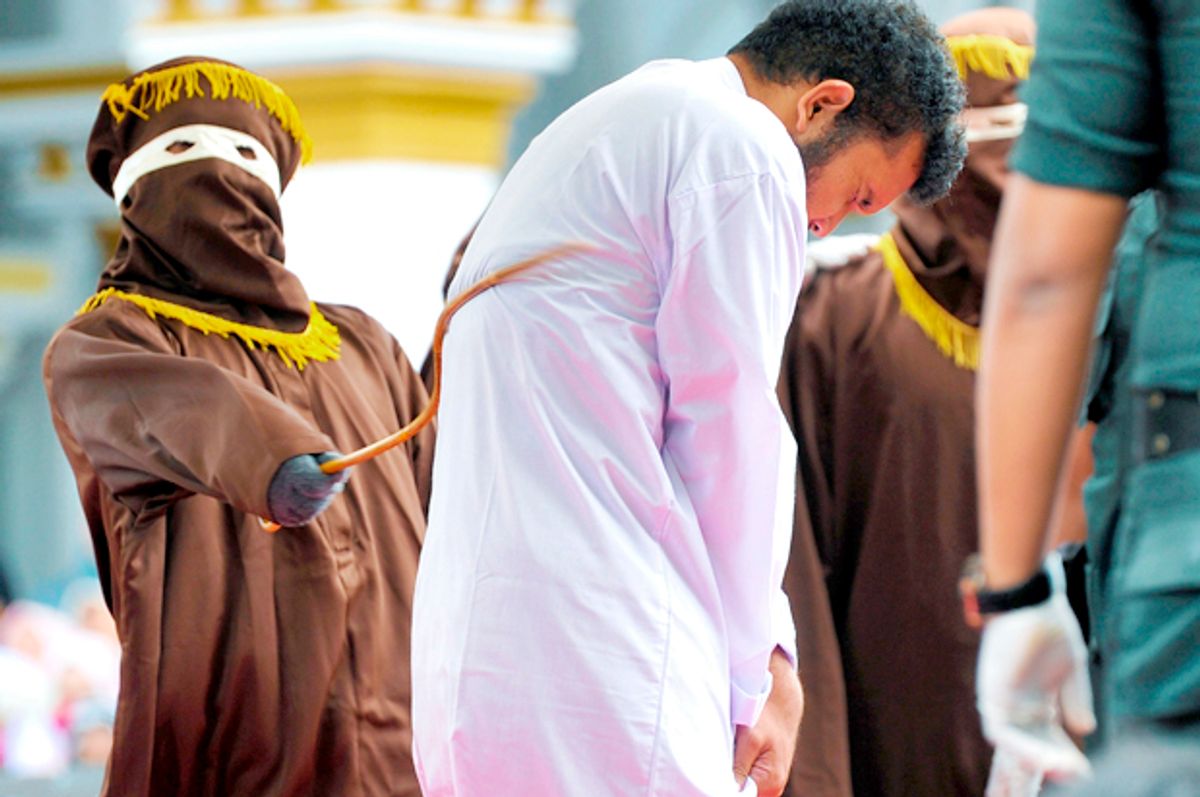 As two men were flogged in the Indonesian province of Aceh, the crowd chanted for more.

Around 1,000 people gathered at the Syuhada mosque in Banda Aceh, the regional capital located at the northern tip of the Sumatran peninsula. The event was a major one for the city. Families brought their daughters and sons, young children crowding close to the stage to get a front row seat. The accused, dressed in white, were caned 83 times. The men were originally sentenced to 85 lashes, but seeing as they had already spent two months in prison, authorities were lenient. The “executioners,” as they are known, removed a blow for each month served.

“Do it harder,” an onlooker screamed, even though the lashings were so severe that aides had to bring water to ensure the men didn’t pass out from the overwhelming pain. “Let this be a lesson to you,” another yelled.

This brutal punishment is retribution for one of Aceh’s most shameful crimes: being gay.

Aceh, a Muslim district of Indonesia governed under Sharia law, expanded its criminal code in 2015 to stipulate that men found guilty of homosexual activity be subject to 100 lashes. That law, as human rights advocates explain, has made vigilantes out of ordinary citizens. The two men publicly flogged on May 23 were discovered naked in bed together after neighbors — who suspected them of being gay — broke into their hotel room to videotape their encounter. The couple was subsequently beaten and dragged to a local police station.

Although Human Rights Watch estimates that authorities in Aceh caned 339 people convicted of morality crimes in 2016 — which include gambling, drinking alcohol, adultery, and wearing revealing clothing — gay men have been increasingly targeted by a country once known for a fairly moderate stance on human rights. After government leaders began demonizing and scapegoating the country’s LGBT population last year, right-wing backlash forced queer and trans people underground. Some have fled to more accepting areas, but most live in hiding, in fear that they could be the next to face the vicious lash of extremism.

It’s an ugly, miserable time to be LGBT in Indonesia, and it’s only getting worse.

Although homosexuality is legal in Indonesia, Aceh is a special case. The conservative district, which counts more than five million residents, has long lobbied for its independence from the rest of the archipelago. In 2006, the federal government struck a deal with Aceh to keep it from seceding. The tiny province would be ruled by sharia law, although any local guidelines that conflicted with national policies would be overruled. But because the Indonesian government doesn’t have laws on the books preventing discrimination LGBT people, anti-gay policies aren’t technically illegal.

Aceh’s new sharia ordinances, which went into effect in September 2015, had an immediate impact on the province’s LGBT population — or even anyone suspected of violating morality standards. Kyle Knight, a researcher for Human Rights Watch, said that two women were apprehended for hugging just hours after the laws went into effect.

“Police accused them of being a lesbian couple, detained them for four days, and shipped them off to religious education camps,” Knight said.

Knight claimed that these events were the start of an “unprecedented crackdown” on LGBT lives in the Muslim-majority nation, even outside the Aceh province. Months after Sharia law was imposed, Indonesia’s education minister, Muhammad Nasir, advocated that queer student groups be banned from college campuses. That January 2016 declaration triggered a wave of anti-gay attacks in just a matter of weeks. Defense Minister Ryamizard Ryacudu claimed the following month that LGBT rights is akin to “modern warfare.” The Indonesian Psychiatric Association responded to Ryacudu’s remarks by claiming transgender people are mentally ill.

The situation further deteriorated from there. Musni Umar, a well-known sociologist, likened homosexuality to “terrorism” and “Armageddon.” Zulkifli Hasan, who is currently the highest-ranking official in the national legislature, even called for same-sex activity to be banned. Most bizarrely, Tangerang mayor Arief Wismansyah claimed that instant noodles would turn the city’s children gay.

“These comments immediately started trickling down into people’s actual lives,” Knight said. “I met people in their 60s who had lived their entire lives in relative peace, and all of a sudden their family members and neighbors started harassing them in the streets. This delicate social fabric they had come to take for granted started crumbling before them.”

Prior to 2016, LGBT rights groups in Indonesia were able to operate openly, but many of these organizations could no longer publicize their events. Of the more than 120 advocacy groups, many shut down. Knight said that gay government officials often picked up and left, afraid that they would be discovered and outed. An Islamic school opened in 2008 to give transgender Muslims a safe space to worship closed last February following demonstrations by the Islamic Jihad Front, an extremist group that has also targeted Christian minorities.

President Joko Widodo has repeatedly failed to condemn the anti-LGBT vitriol, sending an extremely mixed message. Although Widodo declared last October that “there should be no discrimination against anyone,” the president’s spokesperson has also said that there’s “no room” for queer and trans people in Indonesia.

Although a 2013 poll from the Pew Research Center found that 93 percent of Indonesians believe that homosexuality is immoral, advocates claim that the country has  historically had a very different relationship with its LGBT population than neighboring countries like Malaysia and Singapore. In these nations, gay men are routinely targeted and jailed for engaging in consensual sexual activity, but some trans Indonesians have long lived openly in their communities without reprisal. Indonesia holds an annual “Miss Waria” pageant, the colloquial term for transgender women.

“There are LGBT civil society groups that had been gaining footholds in Asia and had been gaining increased visibility and normativity,” said Tarah Demant, the senior director of the identity and discrimination unit at Amnesty International. “This past year was a really sharp repudiation of that.”

Maria Sjödin, deputy executive director of OutRight Action International, said that the backlash largely resulted from the legalization of same-sex marriage in the United States. She claimed that the “social media attention . . . is part of what got people riled up.”

But another factor is the growing influence of hard-line groups like the Islamic Defenders Front (IDF) and Nahdlatul Ulama (NU), the latter of which claims over 40 million members. Nahdlatul Ulama, an organization that believes that LGBT people are “deviant,” “a form of perversion,” and “a desecration of human dignity,” called for an anti-gay propaganda law strikingly similar to Russia’s in February 2016. The conservative Muslim organization has since built strong ties with the Jokowi government. The president, who meets frequently with NU members, once called the group the “vanguard” of Indonesia.

“The government has to take positive steps to make sure that LGBT people have their rights,” Demant said. “That’s certainly not happening across Indonesia.”

Although many queer and transgender Acehnese have fled to more accepting areas of the country, finding a safe haven can be difficult when the rest of Indonesia is following Aceh’s lead. Refugees have nowhere to go. Even though homosexuality is not a crime in Jakarta, police arrested 141 men in a sauna well-known to be a gay hotspot in the nation’s capital. Detainees will be charged for allegedly violating “pornography laws.” Meanwhile, police in West Java, the most populous province in Indonesia, have announced that they will be launching a task force to investigate gay activity.

For those who cannot leave, it can be difficult to get them the resources or support they need. Indonesia’s 260 million population is spread out between more than 15,000 islands, many of which are difficult to access.

“There’s not going to be enough organizing to reach all of them,” Sjodin said. “It’s a pretty challenging situation to say the least.”

Demant, who said that caning is considered “torture” by the United Nations, believes that other world leaders should speak out against the anti-LGBT backlash in Indonesia, including the United States. President Trump failed to take a stand against the imprisonment and killing of gay men in Chechnya, where over 20 men have reportedly been murdered by government officials. (U.N. ambassador Nikki Haley did, however, speak out.) Demant said that Indonesia could be a chance for a president with a mixed record on LGBT rights to be a force for good.