Maybe violence against journalists is starting to become a trend

Someone shot out the windows of the Lexington Herald-Leader, days after a journalist was body slammed 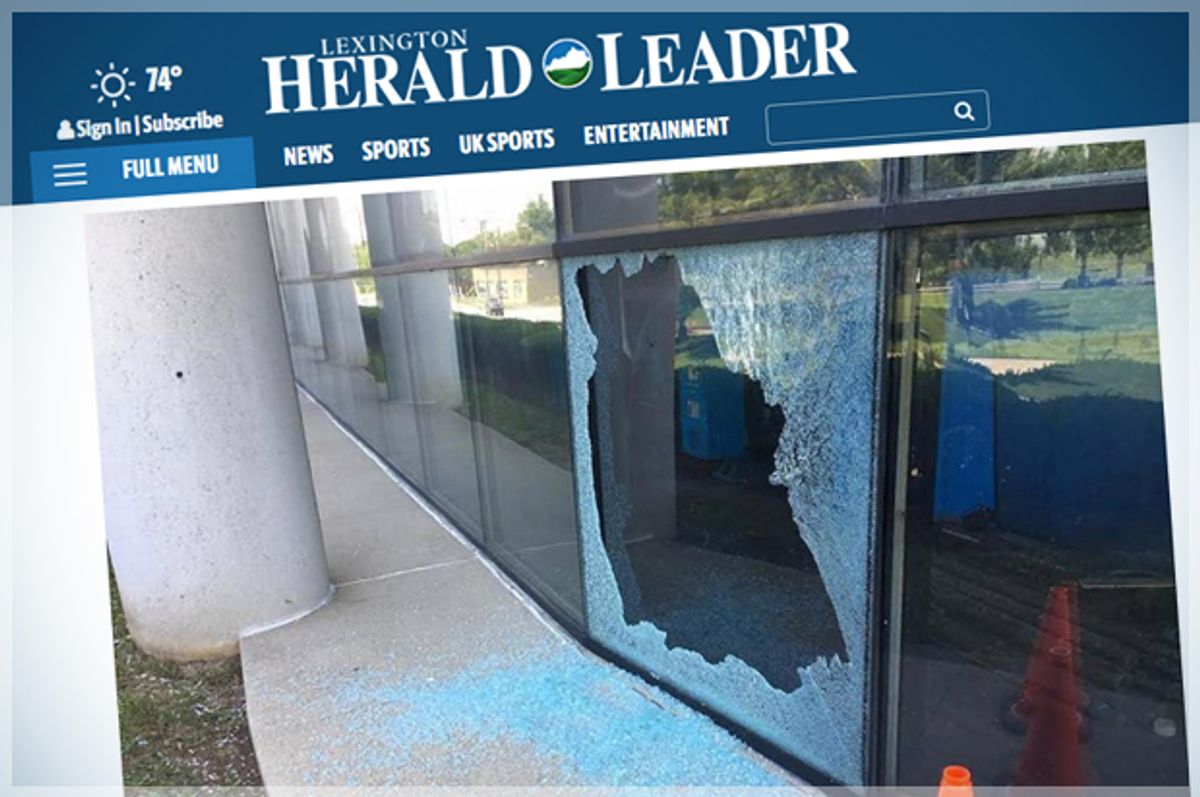 Who shot out the windows of the Lexington Herald-Leader newspaper on Monday? Authorities have yet to identify any suspects or motives, but the shattered windows at the Lexington, Kentucky, offices of the 147-year-old Pulitzer Prize-winning newspaper is a potent image amid what seems to be increasingly brazen attacks on the media in President Donald Trump’s America.

“It’s concerning,” Herald-Leader publisher Rufus M. Friday said. “We’re going to be vigilant,” he continued, but “we’re not going to be deterred by this senseless act of vandalism.”

According to security footage reviewed by police, three exterior windows of the newspaper's offices were shot out using a small caliber gun between 9:45 a.m. and 11 a.m. on Sunday. A small number of employees were in the building, but there were no injuries.

On Tuesday, local police arrested Layne Chadwell, 19, charged him with one count of first-degree wanton endangerment and one count of first-degree wanton endangerment of a police officer. Police say he fired a handgun at a gas station and nearly hit an employee. He was arrested later after a police officer witnessed him discharging a handgun from his car.

As of Tuesday, it was unclear if Chadwell was linked to the attack on the Herald-Leader’s offices.

While attacks on the U.S. media are nowhere near the alarming levels seen in places like Mexico and Ethiopia, insults, threats and harassment of U.S. journalists have increased since conservatives who oppose the mainstream media have become emboldened by Trump’s victory in the Nov. 8 presidential election.

The most glaring example was Grag Gianforte’s physical assault of Guardian reporter Ben Jacobs last week after Jacobs asked the candidate for his views on the controversial Republican health care bill. Though Gianforte admitted having attacked the journalist, which was confirmed by Fox News, voters elected Gianforte to the U.S. House of Representatives a day after the attack. Gianforte is facing a misdemeanor assault charge that can result in jail time.

Throughout the presidential campaign last year, Trump waged a verbal war against the media so brazen that reporters found themselves fearing for their safety at times during the campaign.

Trump has also suggested that libel laws should be changed to make it easier to prosecute journalists covering public figures, and earlier this year he asked former FBI Director James B. Comey to jail reporters who publish classified information, according to news reports.

“When Trump calls the media the ‘enemy of the American people,’ he provides fodder for dictators around the world to justify their own press abuses," Joel Simon, executive director of the Committee to Protect Journalists, and Alexandra Ellerbeck, senior Americas and U.S. research associate at the Committee to Protect Journalists, wrote in a Washington Post editorial published on Thursday.

This rhetoric might also be providing fodder for another group of people: gun-toting Americans.