Monopoly vs. the Nazis: How British intelligence used board games to thwart the Germans

In WW2, MI9 smuggled escape maps and supplies in care packages to troops in POW camps. Here's how 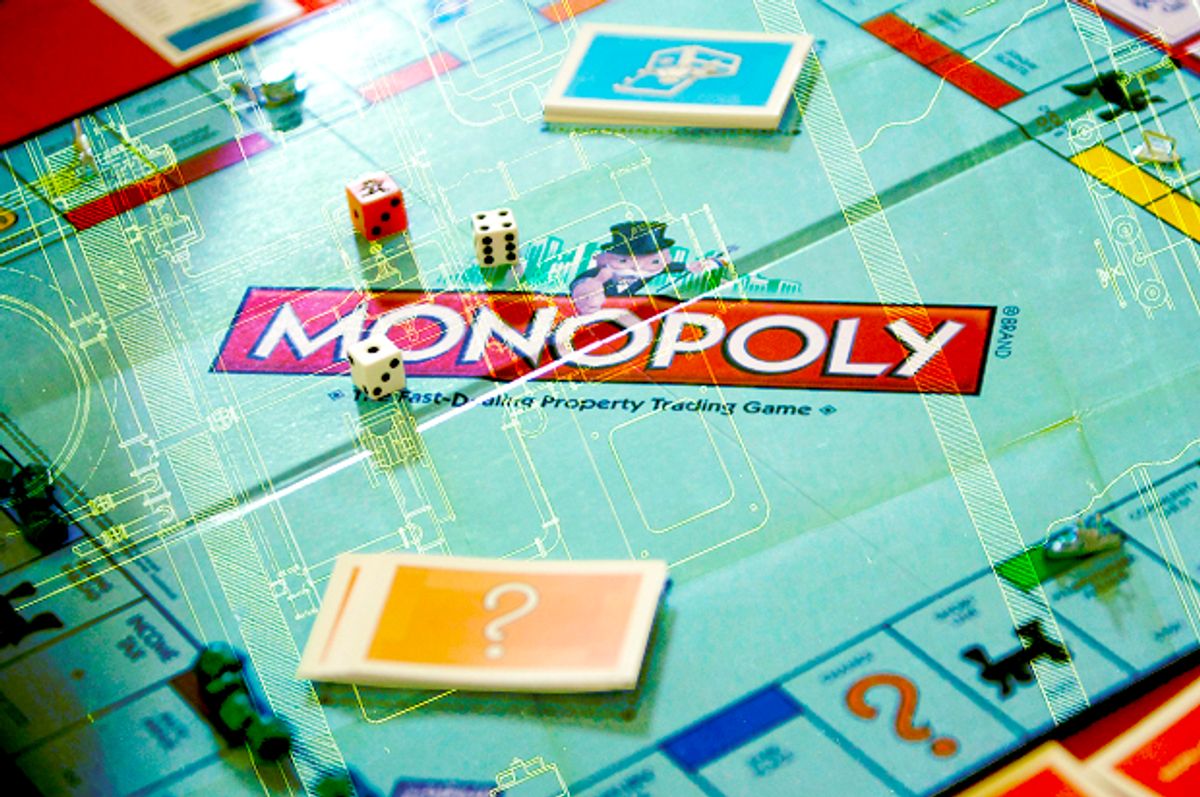 Excerpted from "It's All a Game: The History of Board Games from Monopoly to Settlers of Catan" by Tristan Donovan. Copyright © 2017 by the author and reprinted by permission of Thomas Dunne Books, an imprint of St. Martin’s Press, LLC

“I would like to have some visiting cards printed, please,” said the stocky man with the heavy eyebrows.

It was 1940 and the man making the request had arrived unexpectedly at the factory of the British printer and game publisher Waddingtons on 40 Wakefield Road, Leeds.

The company’s workers thought it was an unusual request. The man said he was a businessman but he didn’t want business cards. Instead he wanted visiting cards, the calling cards of high-society types who regarded the presence of contact details on their cards as common and rude. A visiting card would state a person’s name and, at the very most, name the gentlemen’s club they belonged to. But business was business and it wasn’t Waddingtons’ place to second-guess a customer’s needs, so they took the job. What name shall we put on the card? the employee taking the order asked. “E. D. Alston,” the man replied.

When the visiting cards were ready, Alston returned, paid what he owed, and left. It seemed like just another printing job.

A few days later Alston returned and, with an air of authority, asked to meet Norman Watson, the head of the company, in private. Once alone, Alston told Watson that he was about to discuss a matter of national security and so the Official Secrets Act applied. Discussing what I am about to tell you with others can result in fines and imprisonment, Alston informed the shocked company chairman.

Alston was no businessman. Officially he was a civil servant handling the procurement of textiles at the Ministry of Supply offices in central Leeds, but that was just a cover. In reality he was a British intelligence agent working on behalf of MI9, a new branch of the British secret service founded on December 23, 1939, as the nation prepared for the imminent Nazi invasion of Western Europe. Its mission was to help combat personnel evade capture and help those taken prisoner escape.

MI9 was not the typical gathering of spooks. It was more of an ideas laboratory that invented new gizmos and schemes to get the troops out of enemy clutches. At the center of it all was technical director Christopher Clayton Hutton, an eccentric former movie publicist who was MI9’s answer to James Bond’s gadget guru Q.

He and his team designed pocket radios, made bars of soap with tiny compasses hidden inside, and constructed bicycle pumps that doubled as torches. They stitched together air force uniforms that could be turned into civilian clothing with ease and created waterproof provision tins filled with boiled sweets, water purification tablets, and slabs of brown, sticky “liver toffee,” a combination of malt and cod liver oil that apparently tasted better than it sounds, which wouldn’t be difficult.

Another idea to emerge from the secret think-tank in Room 242 of London’s Metropole Hotel, which the British government had turned into offices in the run up to the war, was to smuggle silk escape maps into prisoner of war camps.

And that’s where Waddingtons came in. For as well as being the publisher of Monopoly in the UK, Waddingtons was pretty much the only printer in the country who knew how to print on silk. Before the war, Waddingtons would print silk programs for the royals who attended the annual Royal Variety Command Performance, an evening of comedy, music, magic, and theater held in the name of charity.

Yet even for Waddingtons, printing on silk was a challenge. First the rayon, the artificial silk the company used, had to be treated with barium tungstate in order to make it opaque and enable double-sided printing. The process had to be done just right. Use too little barium tungstate and the silk wouldn’t absorb the ink but use too much and the material would stick to the parts in the printing press.

After treatment the silk had to be mounted on the press. Again it had to be done carefully because even the slightest slackness in the material would cause the print to misalign. The ink also had to be specially mixed and, finally, the printed silk had to be oiled using special equipment to make it watertight.

Tricky as silk was to use, MI9 knew it was the perfect material for escape maps. Unlike paper, silk can be scrunched up and hidden in tiny spaces without incurring damage, making it easier to smuggle into prison camps and easier for servicemen to conceal. Silk doesn’t rustle either so escapees could use the maps without the risk of giving away their position. On top of that silk maps are hard to tear, do not disintegrate in water, and, thanks to the oiling, the ink does not run or smudge in the rain.

MI9, Alston explained to Watson, wanted Waddingtons to print the hundreds of thousands of silk maps of Europe and Asia it planned to issue to British Commonwealth troops during the war. They also wanted the company to make Monopoly sets that doubled as escape kits that they could then send to British servicemen in the prisoner of war camps.

The Monopoly plan was typical of Clayton Hutton’s maverick imagination. The cardboard base of the game board would have thin compartments cut into them so that a small compass, two files, and a silk map could be deposited inside. Then the paper with the playing area would be glued on top to conceal the equipment hidden in the board.

Specific property names on the board would be marked with a period so that officers inside the camps would know it contained escape equipment and MI9 would know which map it contained. A period on Mayfair, Monopoly’s UK equivalent of Boardwalk, for example, signaled the inclusion of a map of Norway, Sweden, and northern Germany. One on Free Parking meant the game concealed a map of northern France and its borders with Germany.

Monopoly’s bounty of paper money, meanwhile, would become a hiding place for Reichsmark bills and other Axis power currencies for prisoners to use as bribes or to aid their escape attempts.

Keen to support the war effort, Watson readily agreed to help and assigned three of the company’s most trusted employees to the task. MI9 offered to provide armed guards to keep prying eyes away but Watson declined. It would only raise suspicion and frighten employees, he explained.

To maintain secrecy, Waddingtons put nothing down in writing about its MI9 work and began referring to Alston as Mr. A in case anyone not in the know overheard anything.

In the years that followed, Waddingtons produced hundreds of doctored Monopoly sets. In each one they secreted metal instruments supplied by MI9 and their own silk reproductions of the maps provided by the intelligence agency. Every so often, Watson would travel by train from Leeds to London and deliver the games to the lost luggage office in King’s Cross railroad station. Later an MI9 agent would arrive at the office to reclaim the package.

Waddingtons was not the only game maker MI9 enlisted. Another recruit was John Jaques & Sons, the London company behind the Staunton chess set, which was tasked with producing chess sets and Snakes & Ladders games with hidden compartments for escape equipment.