Yes, Maine's important democratic reform is under attack, but the battle for ranked-choice voting goes on 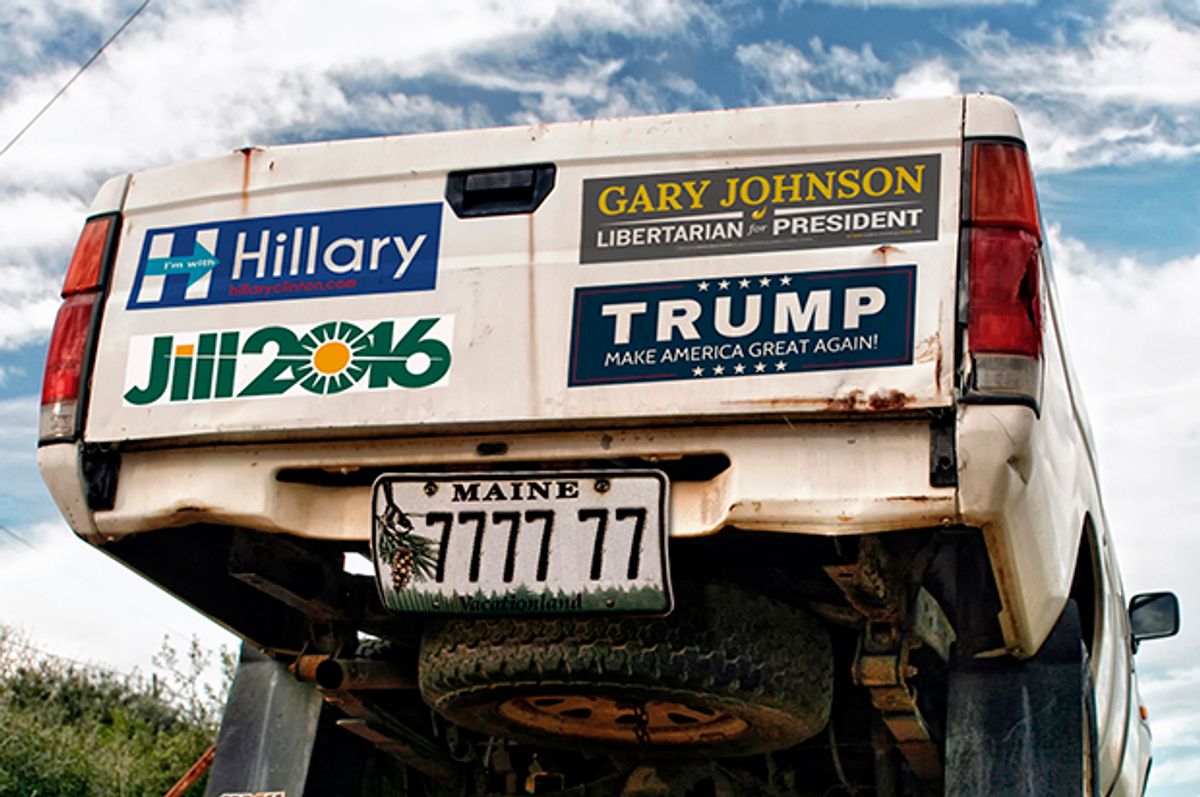 On the same day Donald Trump was elected president last November, further intensifying the state of political dysfunction in America, the voters of Maine took a giant step in the opposite direction. They approved a ballot initiative on ranked-choice voting, a method designed to ensure that whoever wins a given election truly has majority support. Previous legislative efforts in the Pine Tree State had repeatedly died, so voters themselves finally took the lead.

“Maine people have exercised their right to change the way we elect our leaders,” said the initiative’s campaign manager Kyle Bailey in an interview. The victorious ballot initiative "levels the playing field for candidates with the best ideas and gives more choice and more voice to voters, so you never have to vote for the lesser of two evils.”

That’s a particularly big deal in a state with a well-known independent streak, where governors and other officials elected with less than 50 percent of the vote are commonplace. (Maine now has a Republican governor, Trump-friendly conservative Paul LePage, and an independent U.S. senator, Angus King, who caucuses with Democrats.)

Mainers may feel this need more keenly, but ranked-choice voting could and should become a national issue. It matters because ranked-choice voting gives voters individually and collectively a much clearer electoral voice. The idea is simple, and so is the practice: People vote first for the candidate they really want, second for their second-place choice and so on. Voters need not set aside their favorite candidate in the name of pragmatism or forever vote defensively against what they fear rather than for what they want. Forget voting as a political strategist, in other words, and cast a ballot as a citizen.

With the radically different incentive structure created by ranked-choice voting, campaigns tend to become both more substantive and more civil. The idea has spread significantly among cities since San Francisco became the first major city to adopt it in 2002, with its first elections held two years later. Portland, Maine, adopted the method in 2010, with elections using it in 2011. Now Maine could become a similar watershed for states — or so it seemed in November.

Then on May 23, death-sentence headlines flashed across the country: "Ranked-choice voting violates Maine constitution," The Washington Post blared. "Ranked-Choice Voting System Violates Maine's Constitution, Court Says," The New York Times echoed. The reasoning behind a new decision made by a Maine court was a provision in the state constitution permitting the election of candidates with plurality support.

But reports of ranked-choice voting's demise in Maine have been greatly exaggerated. The ruling was only advisory and resulted from a February request by Maine's Senate. It was not the result of a lawsuit, which would be legally binding, and had no bearing on upcoming elections. It was really nothing more than guidance for the legislature to consider should it take further action.

“Ranked-choice voting is the law in the state of Maine,” Bailey said flatly. “It was approved by voters last November. It was certified after the election. Thirty days later, on Jan. 7, it became law. It's on the books. So whether the legislature does anything or not, we're going to have ranked-choice voting in 2018. There are no problems using ranked choice voting, as approved by the voters, for primary elections for state and federal offices, as well as for general elections for U.S. Senate and Congress.”

Furthermore, the League of Women Voters has promised if the state legislature decides to act  to block ranked-choice voting, the league will “support a constitutional amendment that is consistent with the will of Maine people,” as Jill Ward, president of the league's Maine chapter, said in a press release. “The parts of the law that are unaffected by the advisory opinion, including the application of Ranked Choice Voting to federal races, should be implemented in full for the 2018 election.”

As Bailey put it, “The ball is in the legislature's court, and the legislature can make it work. The question is, will they uphold the will of the people, and give the people what they expect and want in our elections? Or will they deny the people a better voting system?”

What’s really going on here, supporters of the new law say, is that entrenched politicians are trying to sabotage ranked-choice voting before it can take effect. So supporters are now organizing to press lawmakers to simply resolve apparent conflicts between the state constitution and the will of the voters.

The advisory court ruling was itself a highly unusual matter, since our legal tradition almost universally restricts courts to ruling on specific “cases or controversies.” Maine’s constitution contains a striking exception. According to Article VI's Section 3, “The Justices of the Supreme Judicial Court shall be obliged to give their opinion upon important questions of law, and upon solemn occasions, when required by the Governor, Senate or House of Representatives.” The court's ability to act in this manner (producing a document of legal advice) makes it more akin to the president’s Office of Legal Counsel than a normal judicial body.

What’s more, this particular judgment did not follow past precedent so far as “solemn occasion” judgments are concerned. “The court previously, through rulings, had said that the 'solemn occasion' option or pathway was not supposed to be used to get a preview of what the court might decide about the constitutionality of an existing law,” Ward told Salon.

“And whether the law is passed by the legislature, or by citizen’s initiative, it has a presumption of constitutionality.” Because of that, she continued, “We did not think this was an instance in which the solemn occasion was appropriate. It did not need . . .  interference by the court." The League of Women Voters has filed a brief making that argument, as well as defending the law’s constitutionality.

As the Portland Press-Herald reported in February, other Maine lawmakers argued that the law was already in effect and the state did not face a "solemn occasion" that required the court to intervene. “I don’t think we have serious doubt about our power or authority because no real legislative action is before us at this time,” state Sen. Shenna Bellows told the publication. “The legislative action was taken by the people in November.”

As Ward explained to Salon, the Maine League of Women Voters began seriously considering ranked-choice voting almost 10 years ago. In 2008 the league started a formal evaluation process known as a “concurrence study" and officially endorsed the idea in 2011. (The final study document is available along with and other state guides from California, Minnesota and Washington.)

During the league's extensive deliberative process, Ward said, the question of whether such a voting system would pass constitutional muster loomed large. In February 2014, the league convened a moot court proceeding to explore the issue. At the time, all three panelists said it was unconstitutional, while members of the public who attended were more evenly split.

“Then within it about a year of that, two of the three moot court judges actually walked back their statements,” Bailey said. “One said actually he thought it was constitutional.”

That would be attorney Jamie T. Kilbreth, who argued in a statement for the constitutionality of ranked-choice voting making four main points, described below. The fact that he changed his mind over time underscores a big reason why the rushed “solemn occasion” process appears ill-advised.

“If you have a problem with the law, if you believe it’s unconstitutional, you file a lawsuit and it works its way through the courts," Bailey said. "It has much more argument and debate and discussion, and contemplation than a quick advisory opinion can possibly produce." Instead, he continued, “Opponents of ranked choice voting in the legislature pushed for 'solemn occasion' in order to circumvent the regular legal process, in the hopes that the Supreme Court would give them a linchpin to try to ram a repeal bill through the legislature. And that's what you see happening right now, [an effort] to undermine the will of the voters.”

This brings us back to Kilbreth’s reconsideration of the constitutionality question. His four points can be summarized as follows:

First, statutes are presumed constitutional and "will be interpreted in any way possible to avoid finding them to be unconstitutional,” especially when enacted “by the ultimate legislative body, the people,” Kilbreth said. Second, the plurality standard in the Maine constitution was not “set in stone” but “was aimed at eliminating the perceived evil of an election being decided by the Legislature rather than by the people in cases where no candidate had received a majority.” Third, “there is no inconsistency between RCV and the constitutional provision," since a candidate who wins a majority has also, by definition, gotten a plurality of all votes cast. Finally, no constitutional judgment can be reached without a case or controversy: “The claim of unconstitutionality is nothing more than rank speculation.”

Both the substance of Kilbreth’s arguments and the fact that he came to them gradually over an extended period of time serve to highlight the rushed and superficial nature of the political opposition to ranked-choice voting in Maine. Ward said she hopes the state legislature will "take the advice of the court, since [it] asked for it, and move forward with a constitutional amendment to make sure that the current law comports with our constitution. We are, in the end about what's good for voters — and this is what the voters have asked for.”