In striking down a gay marriage ban, Taiwan's high court has made the country a leader in LGBT rights in Asia 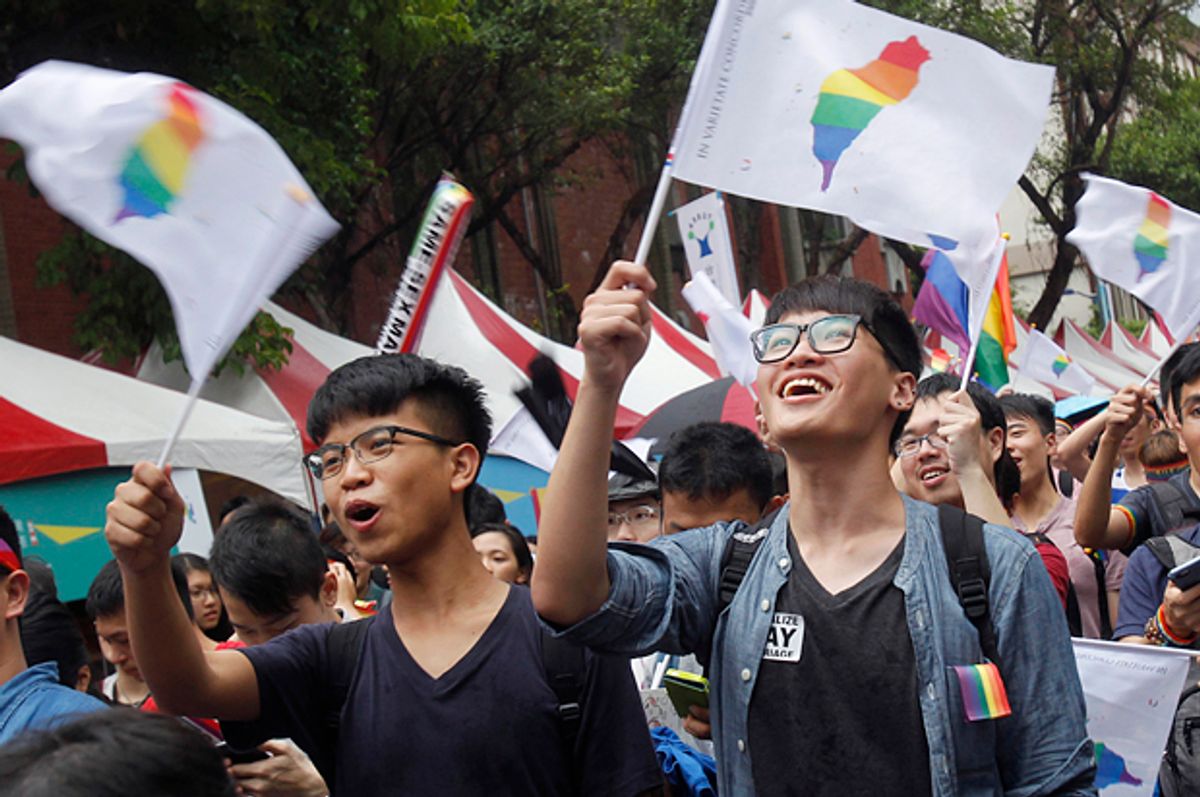 Taiwan could make history as the first Asian country to legalize marriage equality after its Constitutional Court struck down a ban on same-sex unions.

Prior to last week’s ruling, the country’s Civil Code limited the definition of marriage to one man and one woman. But Taiwan’s highest court found that law to be a “gross legislative flaw” which violated constitutional protections. The Constitutional Court stated in a May 24 press release that the law is “incompatible with the spirit and meaning of the freedom of marriage,” also referring to sexual orientation an “immutable characteristic that is resistant to change.”

Unlike the U.S. Supreme Court’s 2015 decision on Obergefell v. Hodges, this ruling will not automatically legalize marriage equality. Instead the issue will be passed to the Legislative Yuan, which has until 2019 to update the Civil Code and draft legislation that would permit same-sex couples to marry.

Even despite the work left to do, this ruling is a major victory for LGBT rights groups that have been pushing for an equal marriage law for decades. Chi Chia-wei, who was arrested in 1986 after coming out publicly, first applied for a marriage certificate 16 years ago.

“I’m leaping with joy like a bird,” Chi told the U.K. newspaper The Telegraph. “It’s been a long fight, and I’m in need of a good sleep.”

Kyle Knight, a LGBT researcher for Human Rights Watch, called Taiwan a “beacon of hope” for a continent where no other countries have comparable legal recognition in place for same-sex couples. “The ruling in Taiwan is an important step towards relationship recognition, and a milestone on the road to equality for lesbian, gay, bisexual and transgender people in Taiwan who continue to face stigma and discrimination,” he said in an email.

Although 22 countries have equal marriage laws on the books, none are in Asia. Vietnam lifted its ban on same-sex unions in 2015, but has not followed up with a legalization effort.

Other countries in the region are unlikely to follow Taiwan’s lead. Japan has taken small steps toward progress in recent years. A few wards in Tokyo permit same-sex unions, and earlier this year, two men in Osaka became the first same-sex couple to be allowed to legally foster a child. But the country, with a strongly conservative culture, remains split down the middle on marriage equality.

Support for gay marriage is even lower in South Korea, where a 2015 poll from Ipsos found that 55 percent of respondents were against legal recognition for same-sex couples. Opposition is even stronger in Indonesia, where 61 percent of those polled say they are against equality.

Jack Harrison-Quintana, the Director of Grindr for Equality, believes Taiwan could set an example.

“Before now, lawmakers in East and Southeast Asia had no Asian examples to look towards when wanting to make the right choice on LGBTQ policy,” he said in a statement. “Vietnam will review their family law soon and could make updates to recognize LGBT people. And Japanese advocates are expected to make a run at marriage equality leading up to the Tokyo Olympics. All of that will be more possible because of what Taiwanese activists have achieved.”

While LGBT activists help move the continent forward, many queer and transgender people are struggling. As a result of colonial laws, sodomy is still illegal in Singapore. Although China decriminalized homosexuality in 1997, a poll found that just five percent of LGBT people are open with their families about their identities.

The United Nations Development Programme claimed that members of this vulnerable population “still live in the shadows.”

“The majority of LGBTI people continue to face discrimination in many aspects of their lives, most importantly within the family, where the deepest forms of rejection and abuse reside,” the organization stated in a 2016 report published in partnership with the Beijing LGBT Center and  Peking University Sociology Department. “Access to health and social services remains difficult when one’s sexual orientation or gender diversity is known to, or even just suspected by, service providers.”

Taiwan, which is two-thirds Buddhist, is known for being socially progressive. Its yearly Pride festival is the largest in Asia, and LGBT issues are even taught in the classroom. A 2011 law allowed for the inclusion of queer history and culture in official school textbooks.

But even in liberal Taiwan, there has been considerable backlash to discussion of same-sex marriage. Although the country’s first female president, Tsai Ing-wen, made marriage equality a central issue in her 2016 campaign, a reported 30,000 people turned out to an anti-LGBT protest in Taipei last December. Right-wing religious groups infamously claimed that legalizing same-sex unions would permit people to “marry a Ferris wheel.”

Previous attempts to pass a same-sex marriage bill through the legislature have broken down, with lawmakers worried that they would be voted out of office by the country’s small but vocal conservative population for supporting it.

But opposition is not solely from fringe groups. Chiu Tai-san, the justice minister of Taiwan, once referred to same-sex marriage as a “newly invented phenomenon.” Calling it an affront to the “social norms and mechanisms formed by the people of our nation over the past thousand years,” Chiu suggested that the freedom to marry would shame the country’s ancestors.

“What are we going to write on the ancestral tablets if same-sex marriage is legalized?” Chiu asked.

Taiwan has two years to settle the debate over marriage equality in a country where a slight majority of the public favors same-sex unions. Sean Howell is optimistic. The CEO of Hornet, an app for gay men popular in Asia, he worked with local advocates to launched the WeAreOne campaign. People from over 130 countries, even those that have yet to pass their own marriage laws, participated in a global sign of support for Taiwan.

“This is proof that human rights are indeed universal, and democratic values can flourish in all cultural spheres,” Howell said in an email. “It’s victory for the rule of law and for equality.”