A suitor on "The Bachelorette" is revealed to be . . . possibly racist

Two episodes into the first season featuring a black Bachelorette, a contestant is outed as an alleged bigot 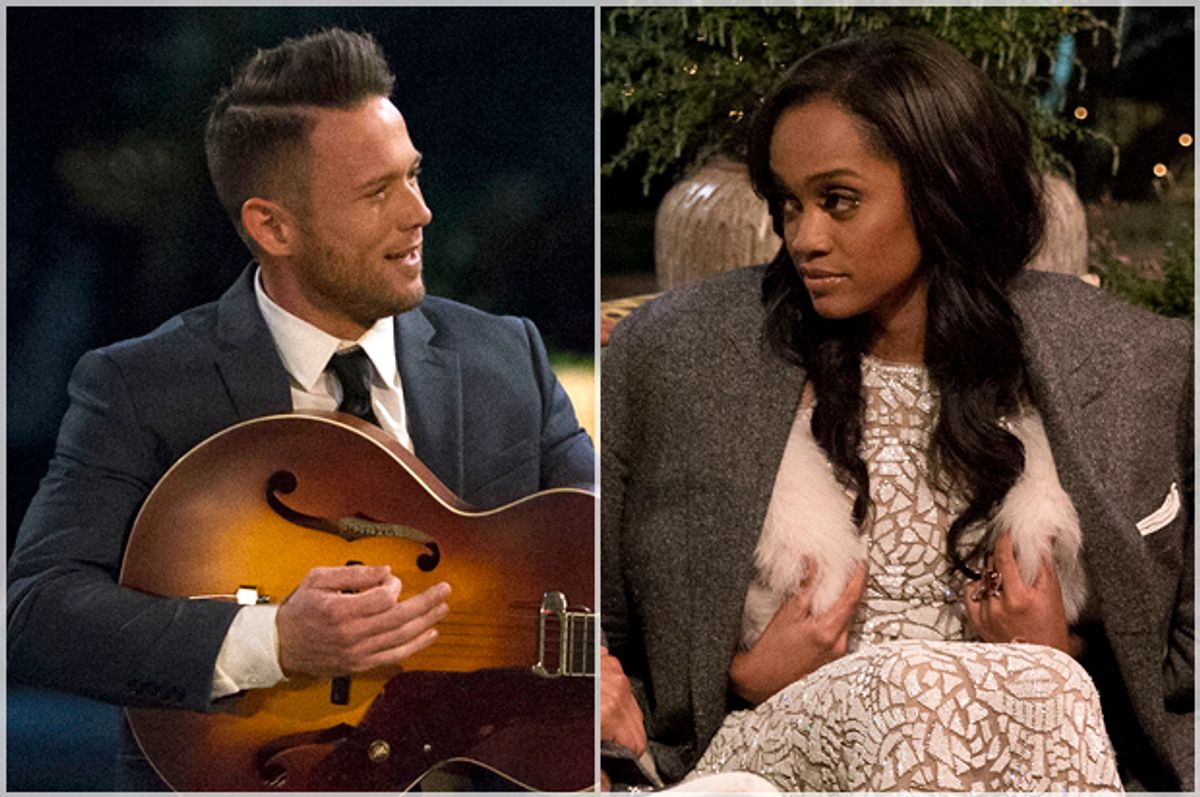 The entire concept of ABC “The Bachelorette” is weird, OK? Let’s get that out of the way up top. “The Bachelor,” in spite of its obnoxious gender dynamic, is easier to buy. “The Bachelorette” and "The Bachelor" audiences skew female, a demo that groks the fairy-tale proposition of the Love McMansion as a women’s dorm that requires evening dresses and uncomfortable footwear. Into this domain comes a handsome man whose affections they share, who takes them on dates and gives them roses and lets the group's members down steadily and easily. It really is a lot like the sorority quad on a college campus.

Whereas “The Bachelorette” asks us to pretend that a gaggle of dudes can be packed into a small space, plied with drinks and charged to win the affections of one woman and that this wouldn’t naturally degenerate into “Quest for Fire.” (“You not here for right reasons! Me here for love! Me respect journey!”)

Ah, but the Love McMansion is a fantasy destination, to which polished, preening males of the species flock for the right reasons. These include finding love and being protective of their prospective mate, a lovely woman they saw on TV, who was wronged by another of their kind.

In the midst of this process each of these would-be Lancelots support their fellow favored suitors, cheering one another on because it’s always bros before — whoops, we’re talking about “The Bachelorette,” where men would never refer to women using the word that also describes a garden tool. For that kind of language, turn to cable.

The very fact that “The Bachelorette” represents the height of unreality made me cringe and become curious at the thought of Rachel Lindsay descending into this set-designed cave overflowing with testosterone and silk ties. As the first African-American woman Bachelorette in the 33-season history of the combined “Bachelor” franchise, more eyes would be on her season than past cycles. Different ones, too. I’m not even a member of the “Bachelorette” nation, but I knew I’d be watching.

My interest doesn’t stem from any allegiance to Lindsay because she’s a black woman (although kudos to her for breaking the show's color barrier) or because, in a move that’s many years overdue, ABC has provided her with the most diverse range of suitors in the show’s history. Rather, I was waiting to see how long it would take for the season’s secret racist to emerge.

I’m not psychic, nor can I claim to have Sherlock Holmesian powers of deduction. What I am is a black woman who’s spent a lot of time in almost entirely white spaces — places filled with people who are proud to cite that they have black friends when they need cover for their ignorance and who may indeed have no idea that they are actually racist. These folks are everywhere. Of course one, if not more than one, was going to show up this season.

Amazingly it only took two episodes for him to come out. Hello, Lee Garrett!

Ladies, Garrett is a 30-year-old dude from Nashville, Tennessee, who according to his bio on Twitter is “pleasantly offensive.” According to ABC’s official webpage for the show, Lee admires his “Mamaw.” And that’s nice. A woman can tell a lot about a man by how he treats his mother and sisters.

We can also tell a lot about a prospective mate by his entertainment preferences. Garrett’s top all-time favorite movies, according to his “Bachelorette” page are — oh dear:  “Gone with the Wind," "Inglorious Basterds" and "Scarface.” At least one of those is bound to spark some fascinating conversations with, gee, a number of prospective African-American dates.

Millions of ladies on social media might agree that we can also deduce a tremendous amount about a man by the content of his Twitter account, and screenshots from an account alleged to belong to Garrett have been making the rounds since Tuesday.

Garrett’s account is set to private, but feast upon a few observational gems attributed to him, rendered in 140 characters or less: “When is the last time you actually saw a pretty feminist? There is a reason for this.”

Or this: "What's the difference between the NAACP and the KKK?  .  . . One has the sense of shame to cover their racist ass faces."

As of the second week of the show, Garrett is still in the competition for America’s Next Top Fiancé to Lindsay, a Dallas-based attorney and a daughter of an African-American U.S. district judge.

These episodes of “The Bachelorette” were produced long before Garrett's Twitter history was revealed, and that puts both the network and viewers in a curious position. ABC, Lindsay and Garrett have remained mum about the tweets, and according to a source who spoke to Variety, the network had no clue that they existed until reporters inquired. Which is strange since reality-show contestants go through a vetting process to prevent such things from happening, especially considering the network’s past kerfuffle with former “Bachelor” Juan Pablo Galavis’ homophobic statements.

It’s also completely plausible that ABC was blindsided, given that despite the Juan Pablo situation the network somehow allowed a contestant’s transphobic response to its questionnaire to remain posted on its site for a time this very season. This is still a series that took 15 years to tap an African-American woman to be a Bachelorette. It was bound to let a Lee Garrett sneak in.

And honestly, I would not be surprised if the producers were completely aware of Garrett’s full profile. (Yes, I’m being kind here.) Producers of a show as wholly fabricated as “The Bachelorette” will take advantage of any untapped versions of drama that it possibly can, and there was no way that race wasn’t going to be a factor this season. In some kind of contorted logic one could argue that doing so furthers the conversation about race, albeit in a very stupid direction.

Lindsay has spoken openly about the pressures of being the first black Bachelorette in a number of interviews. One of her white suitors, Dean, greeted her with the words, “I’m ready to go black, and I’m never going to go back!” which is a bold choice for a first impression. Also, ugh. (In fairness, Lindsay was entertained by the comment and, at least for now, seems to be smitten by the somewhat geeky guy. He loves his mom, too, by the way.)

But to return to our hypothetical caveman’s observation at the top of this story, there are always people on “The Bachelor” and “The Bachelorette” who show up not for the girl or the guy but for their careers. Garrett is a singer-songwriter. Being on "The Bachelorette" is sure to raise his profile in whatever scene he's trying to conquer.

He's not the only apparent fame hound on the show, either. Among the other contestants are “an aspiring drummer,” “a tickle-monster” (what?) and a human who identifies himself as “whaboom,” and appears to be using this platform to audition for some yet-to-be-announced VH1 unauthorized biography about Jim Carrey’s demented cousin.

The point being, Garrett may not care that Lindsay is black if ultimately the only color he has his eye on is green. That doesn't mean he's not racist.