The dark genius of "covfefe": With one stupid tweet, Donald Trump is winning again

Liberals, put down the "covfefe" and pay attention: Trump is playing the role of Mr. Burns, and we're all Homer 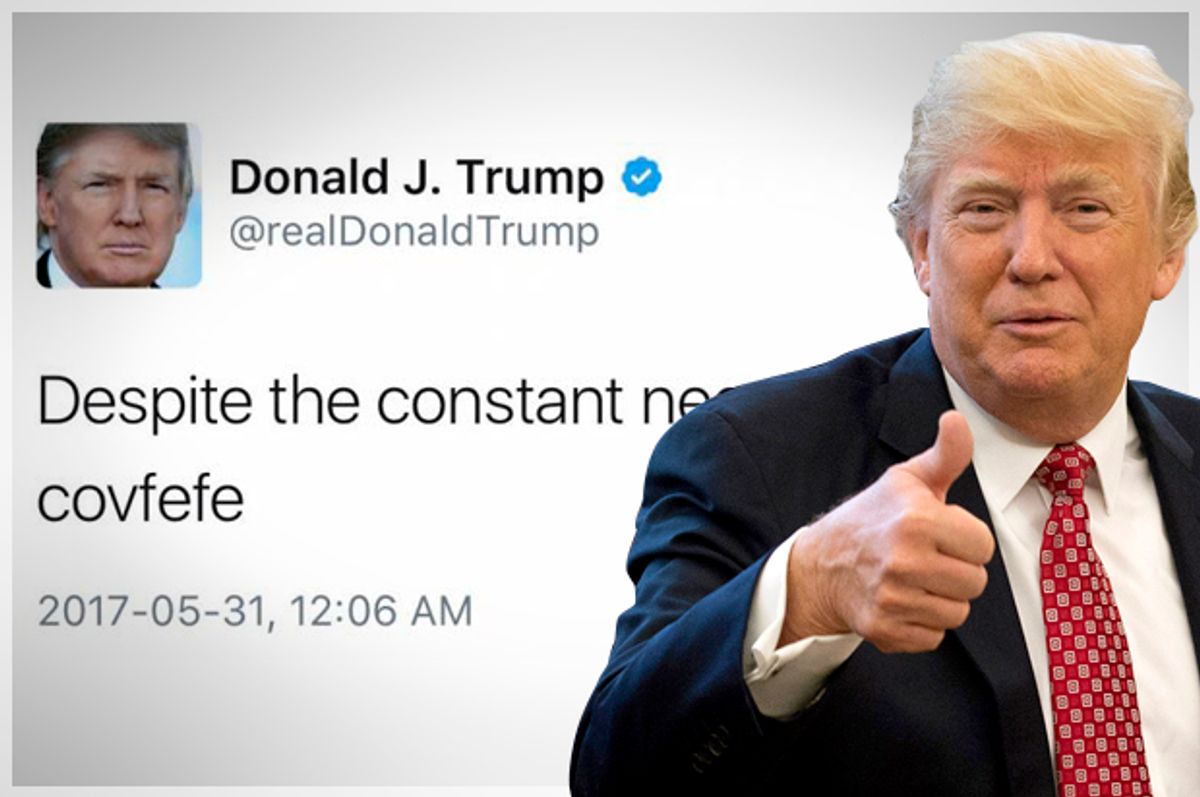 I have watched almost all 618 episodes of the animated TV series "The Simpsons." Along with "King of the Hill" and "The Boondocks," it adds up to an insightful and honest commentary on American culture and politics, through a seemingly unlikely medium. One of my favorite "Simpsons" episodes is called "Homer vs. Dignity," in which Homer, desperate for money, asks his boss, the megalomaniacal billionaire Montgomery Burns, for a raise.

Mr. Burns makes a counterproposal. Homer will become Mr. Burns' personal toy and "prank monkey," whom he will humiliate in various ways, including dressing him in a female panda suit and "mating" him with an aroused male panda of the species at the local zoo. As Mr. Burns mocks Homer the "prank monkey," he throws money at him.

After watching this episode dozens of times since it debuted in 2000, I have come to the conclusion that it is an indictment not just of Mr. Burns and the callous cruelty of America's plutocrats and Wall Street robber barons, but of Homer Simpson as well. Poor Homer, like too many other Americans, is a slave to consumerism and measures his self-worth by the amount of money in his pocket and his ability to buy things he does not really need. Homer is easily manipulated and he literally dances for the crumbs his boss throws at him.

Donald Trump is a cartoon president who has succeeded in making America a joke before the world. Unfortunately, Trump has dragged down many members of the American public with him. This includes not just the human deplorables who bathe in Trump's political effluence as though it were pristine water from the fountain at Lourdes, but also Trump's detractors, who are all too keen to jump on every apparent gaffe in order to enjoy a moment of liberal Schadenfreude as they signal their superiority over the mouth-breathing rubes of the "white working class" who voted for him.

The most recent episode in America as a cartoon series starring Mr. Trump the unpredictable billionaire occurred on Tuesday evening. In response to a story about his adviser and son-in-law Jared Kushner seeking a dubious and clandestine means of communicating with the Russian government, Trump wrote a notorious tweet that began "Despite the constant negative press covfefe" — and ended there as well.

"Covfefe" has been trending online ever since. It will be turned into a meme, become an object of fun on late-night television and likely make an appearance on "Saturday Night Live" in the near future. The chattering classes will try to assign some profound or hilarious meaning to "covfefe." It will be the subject of dozens if not hundreds of columns and essays. Somewhere, right now, a writer is trying to analyze the semiotics of "covfefe" and what it tells us about language formation and identity performance online.

Spoiler alert: The meaning of "covfefe" is not that deep. Trump was trying to type "coverage" and screwed it up.

In all, Covfefe-gate is a distraction from a horrible truth and a signal of the collective frustration that Trump's opponents have felt since his election in November. In the ways that matter Donald Trump is winning.

The Republican Party has embraced him in a type of political suicide pact as he advocates for its most extreme and cruel policies. Trump has filled a vacant U.S. Supreme Court seat with Neil Gorsuch, a right-wing extremist and ideologue whose influence on America will far outlast Trump's relatively short time in office. Trump and the Republicans have already sabotaged the Affordable Care Act and are now close to destroying it outright, a decision that will kill tens of thousands of Americans a year. They are also tearing apart the social safety net and punishing the elderly, the poor, the sick and most vulnerable in order to give the very richest Americans more money. Trump's administration is also eliminating civil rights protections for people of color, women, gays and lesbians, those with disabilities and other vulnerable and marginalized groups in America.

Trump's attorney general, Jeff Sessions, as well as Republicans more generally, are determined to keep African-Americans and others from voting. In addition, Sessions will not act to prevent police thuggery and other violence against black and brown Americans. This is a de facto endorsement of police brutality against people of color. Trump has undermined NATO and America's leadership in the world at the behest, and perhaps the direct command, of Vladimir Putin. Trump now appears certain to withdraw the United States from the Paris climate accords. This move can only bring humanity closer to our doom as a species.

Trump and members of his administration have shown a reckless disregard for democratic norms. They are embroiled in scandals. They abuse power and obstruct justice, operate the White House as a personal racket and a tool for lining their pockets with public money and have likely been manipulated by a foreign power. Yet Trump has not been impeached and won't be anytime soon. His voters still support him. The Republican Party and the right-wing echo chamber have successfully insulated their president from any consequences for his fiendish behavior. Most important, Trump and the Republican Party have normalized fascism and authoritarianism in America.

For Trump's opponents, this is all maddening and frustrating. They laugh to keep from crying while trying to make sense of the unimaginable and what must feel like a living nightmare from which they cannot awake. In all, their jabs and mocking of "covfefe" is not some type of Mikhail Bakhtin-like act of cultural resistance by the serfs against the expansive power of the king and the church. Rather it is desperation and impotent powerlessness.

Real resistance to Trump's regime will involve marching and mobilizing, consumer and labor strikes, doing the hard work of building alliances across the divides of class and race, renewing the country's civic culture, running for local and state office, using the courts and the law to push back against Republican anti-democratic gerrymander schemes, and expending blood, sweat and tears to stop Donald Trump and the Republican Party. Making fun of Trump's illiterate or clumsy statements can be a complement to substantive resistance. It is in no way a substitute for it.

Ultimately, liberals, progressives and others who endlessly enjoy mocking Donald Trump's errors in grammar and spelling — as well as his more general lack of intelligence and grace — still cannot accept that they were bested by a buffoon.

Dance monkeys, dance. In many ways, his detractors are Homer Simpson and Donald Trump is Mr. Burns. "Covfefe" may be nothing more than Trump throwing crumbs at his enemies for his own amusement.