Top CEOs make last-ditch appeal to Trump: Keep U.S. in the Paris climate agreement to save the economy

From Apple to Exxon, the world's leading corporate CEOs lobby the White House — after the Pope and Ivanka failed 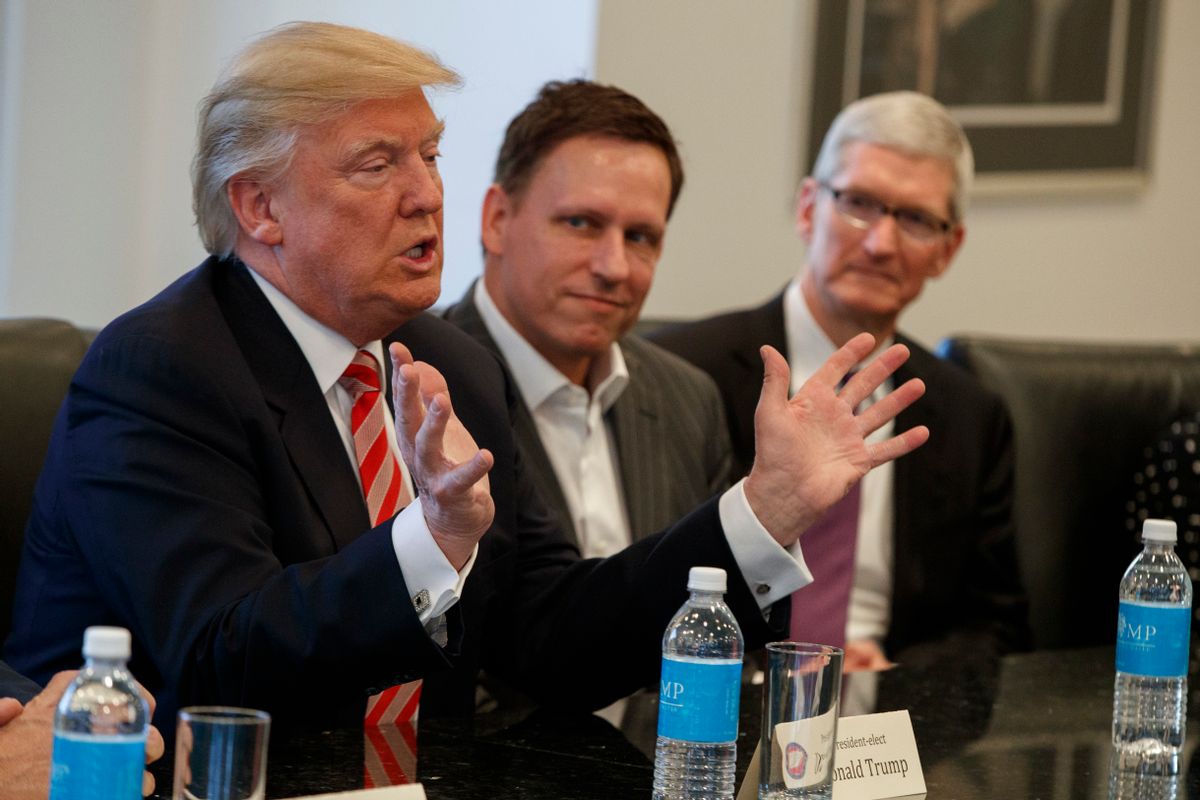 After the much-hyped moderating duo of Ivanka Trump and Jared Kushner evidently failed to persuade the president to abandon his campaign pledge of pulling the U.S. out of the landmark 2015 Paris Agreement on climate change, several top corporate executives have mounted last-minute pleas to President Trump.

Executives from the some of the world’s most influential corporations — including Exxon, Apple, Google, Facebook, Berkshire Hathaway, Microsoft, DuPont, Monsanto and Tesla — have mounted a last-ditch lobbying effort to sell their fellow CEO on a global pact over 200 European leaders and the Pope apparently failed to sell him on.

Trump tweeted late Wednesday that he will announce his decision about withdrawing from the Paris climate agreement at 3 p.m. on Thursday.

Axios’ Jonathan Swan, who first reported on Trump’s final decision, wrote that on the eve of Thursday’s Rose Garden announcement “[The West Wing buzzed] about the West Coast elites like Elon Musk and Tim Cook, who were making last-ditch pleas to Trump”:

Want to know how volatile many administration officials consider Trump? As the sun went down on Wednesday, Trump had told confidants, including EPA Administrator Scott Pruitt, that he was withdrawing from the Paris deal. A withdrawal speech had been drafted and redrafted. An announcement for the withdrawal had been planned for Thursday (today). A whole team of policy wonks inside the EPA had been told to work up mechanisms for withdrawal.

AND YET, numerous White House officials told me in confidence throughout the day that while they were as sure as could be that Trump would pull the trigger, they wouldn't believe it until they saw it.

Musk, Tesla’s CEO, threatened to quit his positions on several White House advisory councils if Trump decides to exit the deal. Musk serves on the president’s business advisory council — where, according to a review from GreenTech Media, nearly every single member is a strong proponent of climate action and every business represented is heavily invested in renewable energy production.

Over 1,000 companies have signed a letter urging Trump to continue "low-carbon policies to allow the U.S. to meet or exceed our promised national commitment and to increase our nation’s future ambition."

Newspapers in the Washington D.C. area ran a full-page ad on Thursday featuring a new letter signed by 25 major U.S. firms in favor of the climate agreement. On Wednesday, Salesforce CEO Marc Benioff tweeted an image of an earlier joint open letter from over 20 top companies based in the U.S. that argue the agreement is good for the economy.

"Continued U.S. participation in the agreement benefits U.S. businesses and the U.S. economy in many ways," the companies wrote.

“When it comes to policy, the goal should be to reduce emissions at the lowest cost to society," Exxon CEO Darren Woods said at the company's annual investor meeting in Dallas on Wednesday, according to Bloomberg. He even argued that oil demand will continue to grow in the coming decades — with the Paris agreement in place. The Financial Times reported last week that Woods sent a personal letter to the president telling him the U.S. must keep "a seat at the negotiating table to ensure a level playing field" and to negotiate “the most cost-effective greenhouse gas reduction options.” Exxon is the largest U.S. producer of gas. Of course, Exxon's last CEO, Rex Tillerson, also supported the Paris agreement.

ConocoPhillips, the world’s largest independent oil and gas producer, also reiterated its support for the climate agreement on Wednesday. “It gives the U.S. the ability to participate in future climate discussions to safeguard its economic and environmental best interests," spokesman Daren Beaudo told Bloomberg.

Despite the last-minute effort by an outside GOP group and Fortune 100 CEOs, only a handful of Republicans in Congress — such as Sens. Bob Corker, Susan Collins, and Lindsey Graham — have called on Trump to remain in the Paris agreement.

In the end, Trump's 2016 advice to college students may be most instructive about who the president plans to turn to on Paris. “Always be around unsuccessful people because everybody will respect you. Do you understand that?”

Doesn't seem like the pleas of successful CEOs, or even the Pope, will hold much sway on Trump's final decision.