Donald Trump's populist promises continue to evaporate: The BS Carrier deal is only one example

Remember how Trump vowed to save those jobs in Indiana? He didn't — and the rest of his populism is fake, too 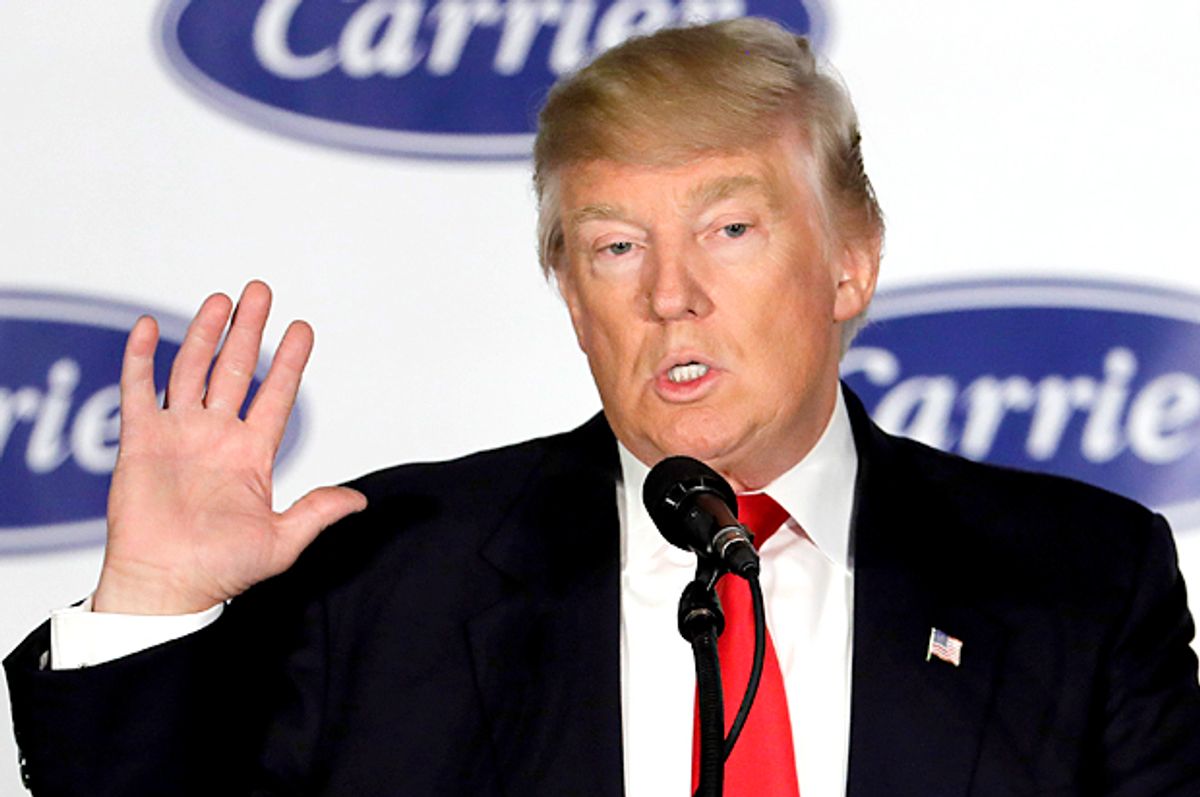 Nearly six months after President-elect Donald Trump traveled to the Carrier manufacturing plant in Indiana last December and claimed to have saved more than 1,000 jobs, the home appliances company announced last week that it would eliminate 632 jobs from the same plant this summer. Though this announcement does not come as a surprise — Trump’s original claim was almost immediately shown to be an inflated number that included jobs never scheduled to leave — it does provide closure to this episode, which began in the spring of 2016 when candidate Trump insisted at a campaign rally that there was a “100 percent chance” he would save the factory jobs if elected president. (“It’s not like we have an 80 percent chance of keeping them, or a 95 percent. One hundred percent,” he said at the time.)

Like most of Trump's supposedly populist campaign promises, however, this one proved to be empty. Carrier’s mass layoff brings an end to another of his publicity stunts. It is only fitting that the 600-plus manufacturing jobs will be outsourced to Mexico, where the minimum wage is $3.90 a day. Unfortunately, building a wall along the border — no matter how big — cannot impede the mobility of capital in the 21st century.

This Trumpian saga perfectly illustrates the hollow and disingenuous populism of President Trump, who as a candidate made countless promises that he never intended to keep — for the simple reason, one suspects, that he never truly expected to become president of the United States. Six months into his term, most of Trump’s grandiose campaign promises have come to nothing, like the many cure-all claims found on an old bottle of snake oil.

Of course, it’s not just that Trump’s promises to fight for “the forgotten men and women” of America are falling flat; it’s that the president’s actual policies are screwing working-class and middle-class people, while benefiting the country’s plutocrats. Indeed, shortly after Carrier’s announcement last week, the Trump administration released its 2018 budget, which proposes sweeping cuts to all areas of government, except for the departments of Defense, Homeland Security and Veterans Affairs.

In Trump’s plan, cuts would be particularly steep for agencies devoted to social welfare, the arts and scientific research. Medicaid alone would receive a $610 billion cut over the next decade, which may trouble the substantial number of Trump voters (about half, according to polling) who consider Medicaid to be important. Meanwhile, the Trump administration hopes to provide corporations and billionaires big tax breaks, thus redistributing wealth upward and further exacerbating today’s historic levels of inequality.

This supply-side disaster prompted the other major “populist” candidate of 2016, Sen. Bernie Sanders (who remains the most popular politician in America) last Tuesday to denounce Trump as the demagogue that he is:

When Donald Trump campaigned for president, he told the American people he would be a different type of Republican, that he would take on the political and economic establishment, that he would stand up for working people, that he understood the pain that families all across this country were experiencing. Well, sadly this budget exposes all of that verbiage for what it really was: just cheap and dishonest campaign rhetoric that was meant to get votes — nothing more than that.

This is a budget for the billionaire class, for Wall Street, for corporate CEOs and for the wealthiest people in this country.

While Sanders was essentially calling the president a fake populist, this isn’t necessarily the case. After all, populism isn’t so much an ideology as it is a political disposition — or, as journalist John Judis aptly puts it in his book “The Populist Explosion,” a “political logic — a way of thinking about politics” that pits the “people” against the “elite.” Populists on the right, of course, tend to differ greatly with left-wing populists on the exact meaning of terms like “the elite,” “the people,” “the establishment” and so on.

“Just as there is no common ideology that defines populism,” Judis explained, “there is no constituency that comprises ‘the people.’ It can be blue-collar workers, shopkeepers, or students burdened by debt; it can be the poor or the middle class. Equally, there is no common identification of ‘the establishment.’ . . . The exact referents of ‘the people’ and ‘the elite’ don’t define populism; what defines it is the conflictual relationship between the two — or in the case of rightwing populism the three.”

At heart, the essential difference between left-wing populism and right-wing populism is a sense of reality (along with the latter’s fundamentally exclusionary nature). Populists on the left, for example, have a much more realistic view of power relations in modern America, and for a progressive like Sanders “the elite” denotes those with real and tangible political and economic power. Sanders’ belief that the country’s economic elite (“the 1 percent”) control Washington is largely supported by the facts. Studies have shown that this dominance has consistently resulted in policies favoring the donor class.

By contrast, right-wing populists like Trump view modern society through a paranoid prism of cultural decline and often peddle conspiracy theories while targeting “cultural elites” without any real power — like freelance journalists (“enemies of the people”) or adjunct college professors who earn less than minimum wage (but read pretentious postmodern literature or critical theory). Right-wing populists also scapegoat immigrants and foreigners and frequently accuse the “elite” of favoring outsiders over natural-born citizens.

With all this in mind, it should hardly come as a surprise that the Trump administration has failed to carry out the populist promises made during the 2016 campaign. Like right-wing populism in general, Trump’s campaign was grounded in fantasy, and the president never had a clue as to how he would truly bring back manufacturing jobs (the majority of which have been replaced by automation, not illegal immigration or offshoring). So he generated a wave of publicity by traveling to a small manufacturing plant in Indiana, hoping to conceal the fact that he had no ideas or solutions. Yet even here, the dealmaker in chief could not follow through on his original “100 percent” promise.

The Trump presidency should serve to discredit right-wing populism as a movement altogether. But without a viable populist alternative on the left, Trump and his proponents could easily blame their endless failures on cultural elites and sinister conspiracy theories, rather than their own incompetence and dearth of ideas. Now is the time then for progressives to come forward to promote their own solutions (single-payer health insurance or “Medicare for all”), while employing the logic and rhetoric of populism to counter and expose President Trump.