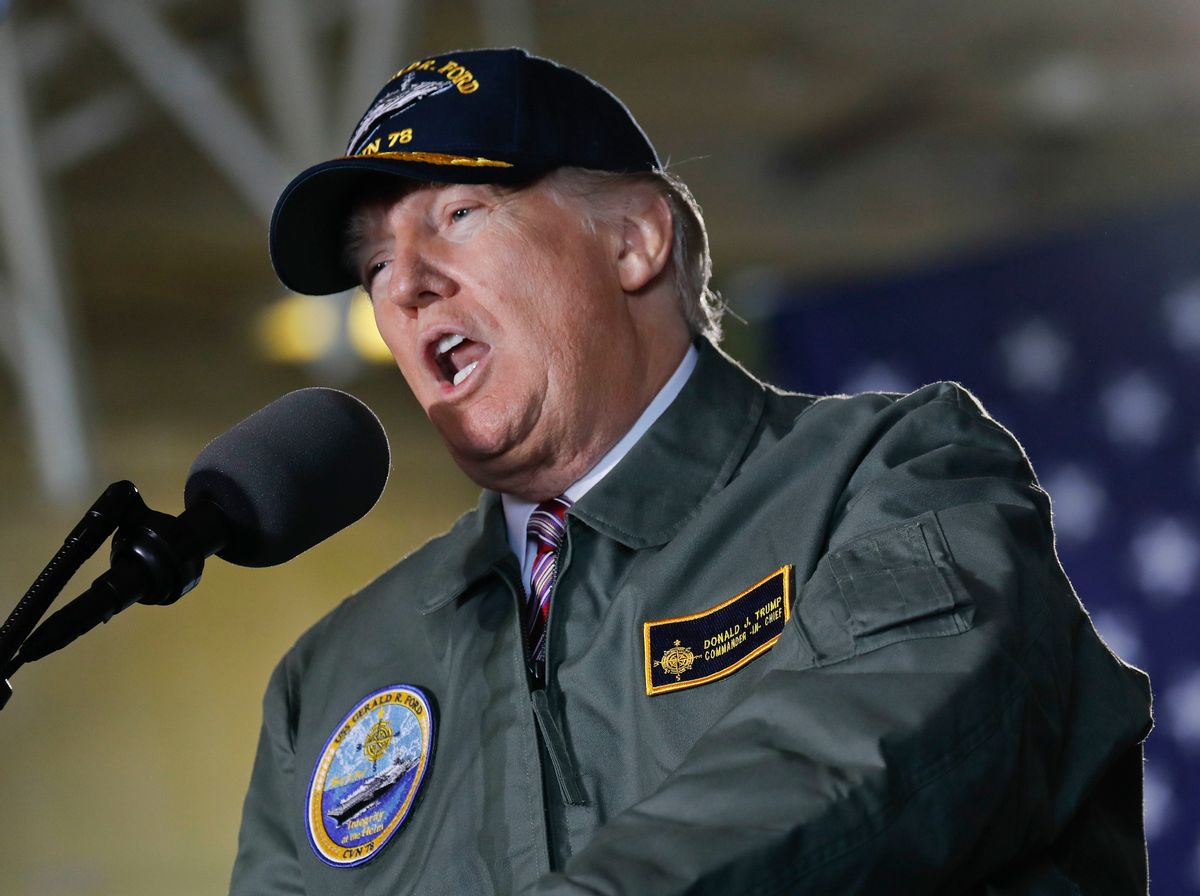 President Donald Trump speaks while aboard the nuclear aircraft carrier Gerald R. Ford, Thursday, March 2, 2017, at Newport News Shipbuilding in Newport, Va. Trump traveled to Virginia to meet with sailors and shipbuilders on aircraft carrier which is scheduled to be commissioned this year after cost overruns and delays. (AP Photo/Pablo Martinez Monsivais) (AP)
--

President Trump’s proposed budget for 2018 aims to pump an extra $589 million into building nuclear bombs. What will he get for that sum? Pretty much the same results that President Obama expected a year ago, when they appeared to cost much less.

The Trump administration has proposed to make room for the new nuclear weapons spending by cutting expenditures in other areas at the Department of Energy, including scientific research that looks at alternatives to fossil fuels. It also has proposed a 65-percent cut in the budget for a program that helps other countries keep the ingredients for a nuclear weapon out of terrorists’ hands.

“That is certainly a broad statement of priorities,” observed Matthew Bunn, a professor at Harvard University’s John F. Kennedy School of Government who has worked as an advisor to the government on nuclear security and terrorism.

Despite the new funds, mostly to be spent for modernization of four warheads, the timetables for the completion of these programs wouldn’t be accelerated, and none of the additional money would be spent on new initiatives surpassing Obama’s aggressive nuclear modernization plans.

“In this budget, they’re not doing any new nuclear weapon projects, they’re just continuing the Obama administration’s modernization plan,” said Hans Kristensen, an analyst at the Federation of American Scientists who closely follows nuclear weapons programs. “It’s not clear to me that this budget increase is going to amount to more and quicker.”

It’s not surprising that the expense of holding the status quo went up, according to Kristensen. In fact, he expects the costs of Obama’s modernization campaign, estimated by independent groups to total around $1 trillion over the next three decades, will continue to climb.

“There will almost certainly be a greater expense. No doubt about it. Unless some miracle has happened, this is always the trend with these massive programs,” he said. “They will not come in on time or on budget. That’s a fact. To portray [it] otherwise is just a little silly.”

The NNSA has long understated the costs of modernizing America’s nuclear arsenal, according to a report last month by the Government Accountability Office. Its auditors flagged what they called a “misalignment” between NNSA’s budget requests to the president and the agency’s internal estimates of what modernizing the arsenal will cost.

They said NNSA’s internal estimates for the years 2018 to 2021 are “below the funding levels NNSA has identified as needed for those efforts.” This lowballing will haunt the NNSA in the future, the GAO said, as it keeps deferring inadequately-funded modernization work to future years, pushing an additional bump-up in costs out to 2022 through 2026.

The NNSA long resisted rigorous cost estimating, and rarely set aside reserves to correct unforeseen technical problems, but under its present administrator Frank Klotz — a former head of the Air Force’s Global Strike Command — it has started producing low- and high-range estimates for what many of its weapon updates would cost. Alas, even the low-end estimates for five nuclear weapons modernization programs, the GAO said, are higher than the estimates contained in the NNSA’s budget plan for 2017 to 2025.

The GAO says for instance that NNSA’s internal models estimate a higher cost for the W-76-1 LEP program, which refurbishes the warheads on submarine launched ballistic missiles, than NNSA has budgeted for this program. The gap is more than $143 million over the years 2017 to 2020. The cost of building a modernized B-61 bomb, to be carried mostly by planes in Europe, will be $200 million to $2.6 billion more than the $7.4 billion budgeted from 2016 through 2025, the GAO said.

The shortfall was foretold. In Dec. 2015, according to the GAO report, Energy Secretary Ernest Moniz warned the director of the White House Office of Management and Budget that the NNSA would need $5.2 billion above OMB-approved budget levels from 2018 to 2021 to keep its weapons modernization program viable and sustainable.  He also said that NNSA would need $1.4 billion more over five years than OMB had approved for infrastructure construction, and $550 more than was budgeted for a high-performance computer initiative.

Mostly following this playbook, Trump’s budget seeks an additional $524 million to modernize aging buildings at the NNSA’s eight major sites, plus $111 million for an exascale super-computing effort. It also would curtail construction spending for the controversial Mixed Oxide Fuel Fabrication Plant at the Savannah River Nuclear Site in South Carolina, as the Obama administration had proposed. The plant was begun as a way to convert 34 metric tons of war-grade plutonium into fuel for nuclear power plants, but has since become a problem-plagued symbol of DOE and contractor mismanagement, with heavy cost overruns.

But in several other ways, the Trump budget proposal would reverse course from the Obama years. It would, for example, eliminate an initiative — hailed by then-Secretary of State John Kerry — to accelerate the disassembly of older nuclear warheads that have been retired from the stockpile. “The intention here is that [the Trump administration] didn’t want to have extra resources going into dismantlement that could go into beefing up” the weapons modernization program, Kristensen said.

The proposed cut in spending to reduce the nuclear terrorism threat appears to contradict one of the priorities spelled out by Trump before he became president. “The biggest problem we have is nuclear -- nuclear proliferation and having some maniac, having some madman go out and get a nuclear weapon,” Trump said in a Dec. 2015 debate between Republican presidential candidates. “That's in my opinion, that is the single biggest problem that our country faces right now."

Yet his proposed budget would cut $84 million from the international nuclear security program, bringing it from its present level of $130 million to $46 million. “Is the risk of nuclear terrorism over? I would say no,” Harvard’s Bunn said in a phone interview. “So this is not the time to be slashing funding for this work.” His colleague Nickolas Roth, a research associate specializing in nonproliferation issues at Harvard’s Managing the Atom program, called the proposed cuts to nonproliferation programs “very, very concerning” because it takes money away from “the primary mechanism the U.S. has” to help countries guard weapon-useable nuclear materials from theft.

“As budgets for NNSA weapons programs get bigger and bigger, it will put more and more pressure on other programs like nonproliferation,” Roth said. “I worry what that will do to them in the long run.”

NNSA spokesman Greg Wolf said in an emailed response to questions however that the budget cut for this program “does not indicate a reduction in work scope” but instead the fact that the department has unspent funds for this purpose left over from previous budgets. “All scheduled activities continue as planned,” Wolf said.

He did not provide details, but the NNSA’s work to reduce the threat of nuclear materials thefts in Russia has been sharply curtailed by that country, and so it’s possible that some of the unspent funds — now being carried over to fiscal year 2018 in NNSA planning — came from the truncated remediation effort there.

Bunn said he was well aware that the Russia-related work has mostly ended, but argued that important work remains to be done elsewhere. “What has to happen now in my view, rather than cutting these efforts, is to strengthen and revitalize them,” he said. “How do you protect places where nuclear materials exist? How do you test systems against intelligent adversaries? All of these are really big problems.”

It’s worth noting, finally, that while the nonproliferation budget is shrinking, spending for image-making by the Department of Energy — which includes the NNSA — would grow. The pot of money for its public affairs office would nearly double to $6.2 million from its enacted 2016 level of $3.4 million. And the Chief Information Officer’s division responsible for spreading feel-good news about the Energy Department would get a 25 percent boost to $91 million.