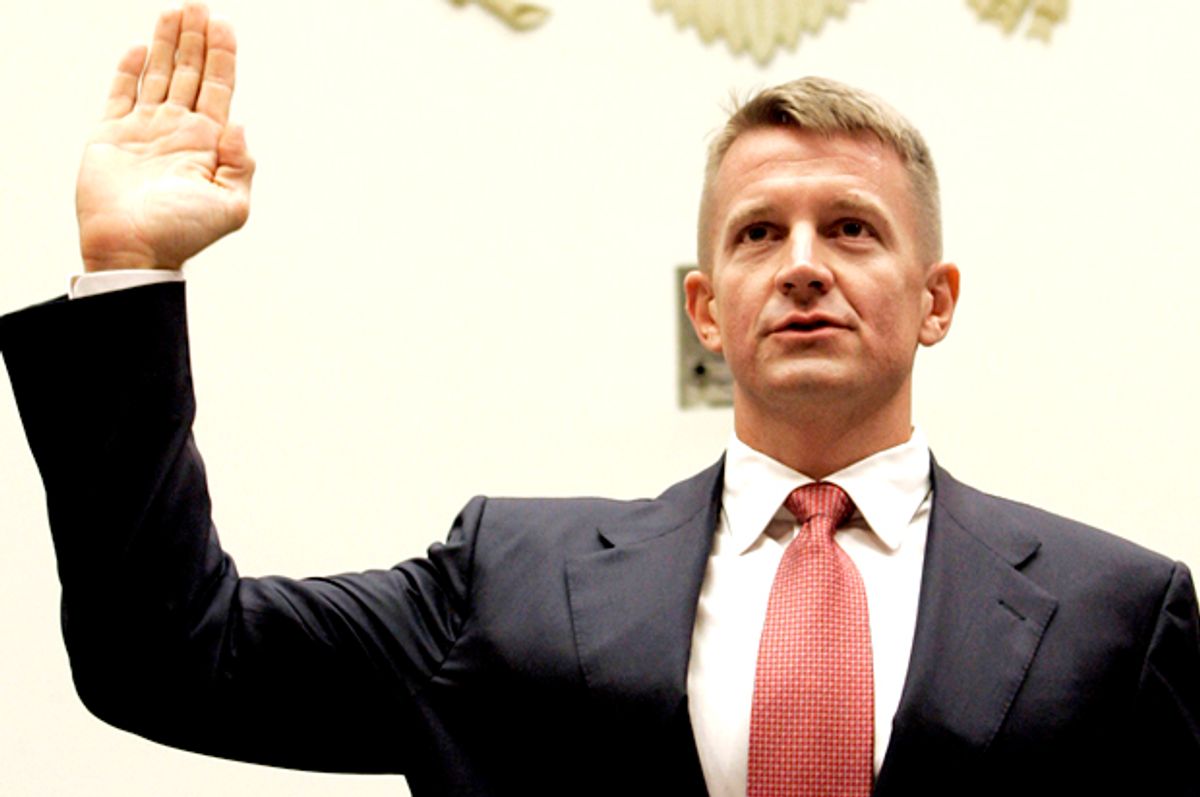 Lost in the cascade of stories of potential White House criminality and collusion with foreign governments is the Erik Prince affair. It is reported that Prince, the brother of controversial  Education Secretary Betsy Devos who established his power in Washington with his mercenary army Blackwater during the Iraq war, met with Russian intermediaries in an obscure Indian Ocean archipelago to establish back-channel communication with Moscow, possibly in coordination with the efforts of Jared Kushner, who last week was reported to have sought a White House back channel to the Kremlin.

Bloomberg reports that during the presidential transition late last year “Prince was very much a presence, providing advice to Trump’s inner circle, including his top national security adviser, Michael T. Flynn.” While President-elect Trump, in reality show style, paraded administration applicants through the gilded front doors of of Trump Tower for the gauntlet of cameras, Prince “entered Trump Tower through the back,” reports Bloomberg.

Prince met at least several times with the Trump team, according to the multiply sourced reporting, including once on a train from New York to Washington, where Prince met with Peter Thiel associate Kevin Harrington, who would later join the National Security Council and be tasked with “strategic planning.” Prince is said to have advised Harrington, Flynn and others on the Trump transition team on the “restructuring of security agencies” and “a thorough rethink of costly defense programs.”

The account sounds innocuous enough as reported, but Prince’s recent appearance on Fox News’ “Tucker Carlson Tonight” sheds considerable light on what the series of furtive discussions likely entailed. The appearance might have been an effort to generate public support for what Prince advocated in private. The man who reinvented mercenary warfare described to Carlson a vision for a corporate military occupation apparatus that makes his infamous Blackwater look modest, despite its capturing of $1 billion in contracts during the Iraq war and occupation. Prince proposed nothing less than the revival of the British East India Company model of for-profit military occupation, wherein an armed corporation effectively governed most of India for the extraction of resources.

Prince explained to Carlson how the almost 16-year-old war and occupation of Afghanistan is premised on a faulty model. “We’ve fought for the last 15 years with the 1st Infantry Division model,” he says. “Now we should fight with an East India Company model, and do it much cheaper.”

“So you replace a military occupation with the ‘American South Asia Company’ or something like that?” asks Carlson.

“Something like that, sure,” Prince replies. “If you look back in history, the way the English operated India for 250 years, they had an army that was largely run by companies — and no English soldiers. So cheap, very low cost.”

It was also “very low cost” to the English because the British East India Company funded itself by extracting wealth from the territories it occupied.

“It was not the British government that seized India at the end of the 18th century,” writes the author of "The Anarchy: How a Corporation Replaced the Mughal Empire,"William Dalrymple, “but a dangerously unregulated private company headquartered in one small office, five windows wide, in London, and managed in India by an unstable sociopath.”

Prince knows this. The British East India Company was not simply a mercenary army like his Blackwater but an armed corporation that colonized like a state power. It was not merely a government contractor like Blackwater but an autonomous military and administrative entity sharing the worst aspects of both the corporation and the imperial state. So, Prince’s first innovation is to do away with civilian-military control administered by the Department of Defense and overseen by civilian, elected leadership, as is currently in place, and replace that apparatus with an armed corporation.

The second innovation is to denationalize the armed force projecting the corporation’s power. Americans are expensive. Blackwater personnel regularly received six-figure salaries for work in Iraq. Prince envisions a sweatshop-ization of the mercenary force, relying on the cheap labor available in the ravaged domestic labor market of war-torn Afghanistan. Loyalty is not cheap, of course, but Prince is imagining a project of colossal capitalization, likely far bigger than his Blackwater endeavor. The per-day base pay for Blackwater personnel in Iraq was somewhere in the neighborhood of $600, nearly 50 percent higher than the annual per capita income for Afghans. An Afghan might make more in a very short time fighting for Prince’s corporation than his countrymen make in a year.

But that deluge of Blackwater money enabling such outsized salaries came from Pentagon and State Department contracts during the mercenary firm’s days in Iraq. Where would revenue come from for what Prince now proposes? Resource extraction, just as the East India Company operated on the subcontinent for British stockholders. This is the third innovation Prince offers.

“There’s a trillion dollars in value in the ground: mining, minerals, and another trillion in oil and gas,” Prince says of Afghanistan. This would provide the revenue stream to replace government contracts. Prince’s firm would be self-funded, self-reliant, and thus autonomous to a degree more similar to a nation-state than a military contractor like Blackwater serving under a defense department.

The corporate rulers, Prince suggests, would even reorganize objectives away from the original mission — i.e., destroy the safe harbor for al Qaeda and other terror groups — and toward the prerogatives of profit. Prince critiques U.S. strategic aims in Afghanistan to Carlson: “Even the whole approach of placing bases U.S. bases was all done to control land and territory but not the arteries that make money.”

Prince’s plan to fund occupations by pillage would otherwise be simply an insane notion howled from the wilderness of policy thought were it not for Prince’s proximity to the president and Trump’s repeated assertion that the U.S. should have taken Iraq’s oil to recoup costs. Indeed in his first speech in his first full day in office, speaking at the CIA headquarters, Trump revived his campaign-season idea of taking Iraqi oil, even telling the audience, “maybe you'll have another chance.”

But Prince’s innovations on the straight occupy-and-plunder model might excite Trump and his team far more, since it fully neoliberalizes war and occupation into a sleek corporate form, taking those vast Pentagon outlays off the federal budget and opening up those ventures to investment. It’s war that pays for itself! It’s likely an attractive prospect for a party whose central passions are to cut taxes and privatize government services.

But one needn’t be a graduate of the Wharton School to understand what happens when war and occupation are made into a fully capitalist enterprise. Capitalism operates with a simple directive: to increase and sustain profit, to expand. When capitalism doesn’t expand, ideally at a rate of at least 3 percent a year, it’s said to be sick, in recession. Corporations behave according to a genetic desire for permanence and expansion. In fact, the coercive competition of the capitalist market ensures that firms that don’t seek expansion eventually die. It’s not a choice; expansion is an existential imperative in capitalism.

The corporation must act like a cancer, always seeking new growth, conquering every cell and moving on to the next. The health of the capitalist economy depends on this propulsive hunger. U.S. military objectives, conversely, are finite. Victory is sought, at which point troops come home. American military failures of the post-war era have been when permanence and expansion complicate the imperative of victory (e.g., Vietnam, Afghanistan, Iraq).

But if anyone knows about relegating matters of state to the hunger for profit it’s President Trump, whose extant ties to his business interests already complicate the constitutionality of his dealings. In the same way that his intelligence memos are more interesting to the president when his name is included more often, it could well be that making matters of state into matters of profit speaks to the president in a way that workaday statecraft, even the command of an empire, cannot. Might it be that, for the real-estate-mogul-turned-president, making countries into properties makes sense? Might it be that Prince, certainly Trump’s intellectual superior, knows this?

Appearing on Jeremy Scahill’s Intercepted podcast, the Daily Beast’s Spencer Ackerman shared his dystopian worry about Prince’s potential influence on the president and Trump’s vulnerability to the sort of profit scenarios Prince is selling these days: “A few short weeks after this supposed back-channel conversation gets entered into between Kushner and [Russian ambassador Sergey] Kislyak, Erik Prince actually acts as a Trump back channel. How paranoid should we be, how paranoid should I be that someone with such extensive experience in running a paramilitary private company is kind of a go-to Trump guy? At my most paranoid, I'm asking, is this Trump's contingency plan?”

We’ve witnessed the tension of military and money since Eisenhower warned of the military-industrial complex, the introduction of capitalist profit into war-making and the predictable effect of an ever-expanding national security state at odds with the founders’ intentions. But Eisenhower’s critique of the arms industry only hinted at what a full subsumption of war by capital might become. A hypothetical American South Asia Company would have no more desire to end an occupation than Toyota would have to stop selling cars or Apple to stop selling electronics. It would, like any other corporation, seek sustenance and expansion. As Prince admitted to Carlson, the aims and objectives of war would immediately shift to "the arteries that make money.” Our problem, says Prince, is that we went to Afghanistan with the intention of combating terrorism, not seeking profit. Our problem, he suggests, is that we went to Afghanistan with the intention of leaving.