Showtime's new series forgets that every once in a while a show about comedians should be, you know, funny 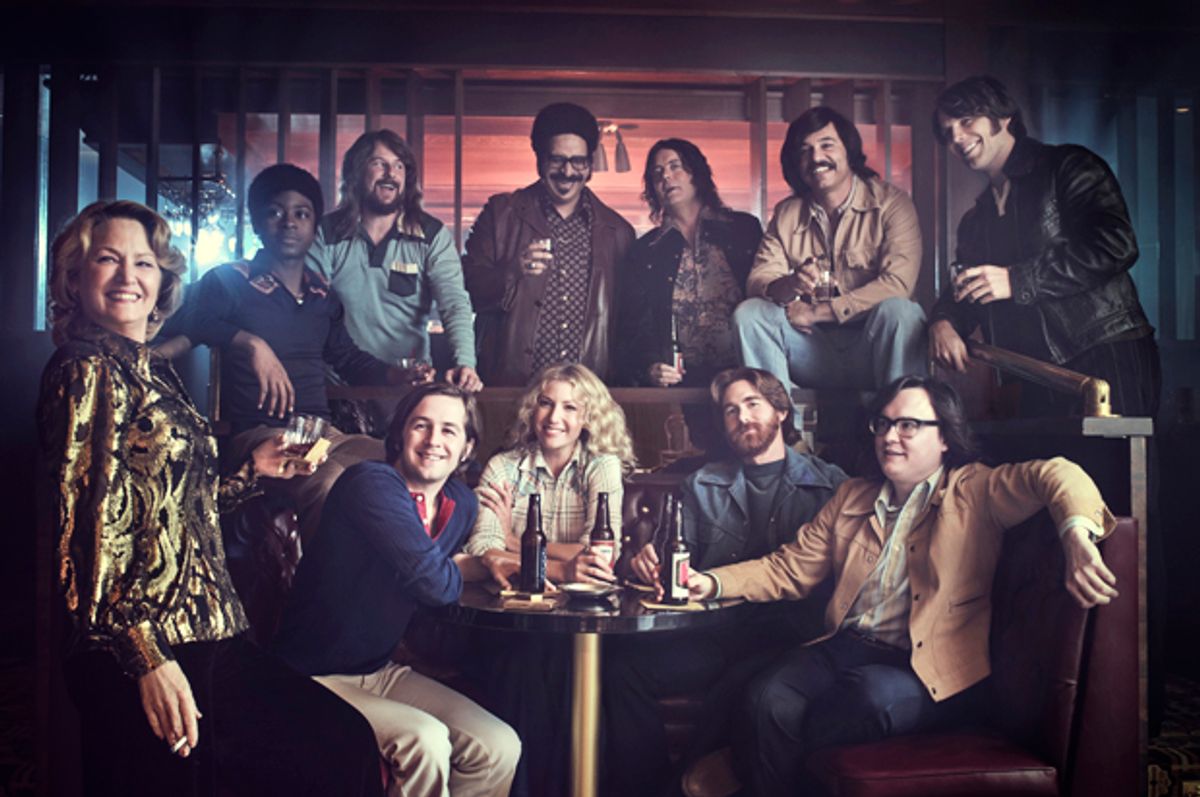 Too many great or even very good series are on television right now for a series like Showtime’s “I’m Dying Up Here,” a drama about stand-up comedians, to get away with a level of execution that’s best described as serviceable. Executive produced by Jim Carrey, "Dying" also happens to be a period piece about the hardscrabble 1970s stand-up comedy scene in Los Angeles. And this setting presents another symptom of the script's weakness: Rarely, if ever, does it coax forth laughter.

It's not that a show like this should be a nonstop giggle fest, understand. But shouldn’t a series about stand-up make a viewer laugh sometimes? Otherwise a person is left to wonder what makes the people onstage who are talking into a black-blanketed room compelling enough to hang a show on their exploits. Sadly “I’m Dying Up Here,” premiering on Sunday at 10 p.m., does not suitably answer that question. Snippets of characters delivering sets barely elicit a snort, and yet the audience at the club breaks into peals of laughter that is not earned. The disconnect is palpable.

“I’m Dying Up Here” arrives during a period of high interest in the world of stand-up comedy and the lives of the people who create it. The entertainment field is flush with television series depicting the trial and skill involved in uniting a room filled with strangers with laughter.

Some of these takes range from surreal and artistically extravagant presentations in shows like FX’s “Louie” to the friendly if bedraggled realism of Pete Holmes’ HBO half-hour show “Crashing.” Nowadays comedians have numerous paths to widespread notoriety via a variety of platforms — viral shorts, podcasts, downloadable products. A burgeoning streaming service Seeso exists solely to promote classic performances and newcomers.

Of course, the brass ring remains the starring role in a sitcom or solo hour=long specials produced by the likes of HBO, Netflix, Comedy Central and, yes, Showtime.

Theoretically “I’m Dying Up Here” could add to this by diving into the sweaty wildness of a bygone time in which the kingmakers were few — or, really, pretty much only Johnny Carson. For a new comic, “The Tonight Show” was the moon shot, the gateway to stardom. Making it onto Carson’s stage, killing a set, then earning an invite over to the hallowed guest couch was the comedian’s version of leveling up.

In “Dying,” clubs such as Goldie’s represent the minor leagues, scoured regularly by agents hunting for the next hot act. Goldie herself (Melissa Leo) maintains a stable of regular performers whom she carefully cultivates before offering them up to the major leagues, that is “The Tonight Show,” Burt Sugarman’s “Midnight Special” or other TV variety gigs.

But Goldie’s has a clear hierarchy, and its owner favors some over the others — mainly a crew of men that includes Ralph King (Erik Griffin), Bill Hobbs (Andrew Santino) and Edgar Martinez (Al Madrigal). Another Goldie’s regular, Cassie Feder (Ari Graynor), grinds away in The Cellar, the club’s lower level where green comics fight for their break and hone their sets into the vaunted tight 15 minutes. Goldie herself tightly monitors the ecosystem of the place.

Thus when a tragedy rocks the club's tight-knit community, another player has a chance  to rise, sprouting heated conflict where there is usually friendly, supportive rivalry. The incident also emboldens Cassie to step up from the house’s resident girlfriend and support figure to take aim at a slot in the main room.

“I’m Dying Up Here” teases the audience with the possibility of greatness when it explores the odd fraternity that exists within this group, particularly in relationship to Graynor’s Cassie, a woman who has earned the respect of her male cohorts and yet chafes at watching them vault over her. But Leo’s Goldie is a nightclub matron who wittingly or not follows the adage of loving her sons and raising her daughter.

When Cassie confronts Goldie about this, the nightclub matron explains that she lacks a unique point of view. “What are you?” Goldie growls in challenge. “You’re funny; I give you that. Phyllis Diller, I know what she is. Joan Rivers, I get. But you, no clue. You’re all over the map. No point of view.”

Goldie challenges Cassie to find a voice that women can relate to. And she does, by going dark and blue, starting by finding punchlines in her own sexual objectification. One could argue so does Amy Schumer. Cassie, however, is not even fit to be called the zygote that becomes Amy Schumer.

Without a doubt “I’m Dying Up Here” contains compelling characters whose colors deepen as episodes go on, something that should happen in any series worth its salt. But while its initial episodes focus on Cassie’s struggles and jokes as a comic, the other characters suffer in the bargain. As Cassie struggles to find a clear focus in her act, so does this series. Leo’s formidable performance provides each episode with a firm tentpole, and Graynor’s Cassie can be magnetic, especially in the scenes when the actor rises to meet Leo at her level.

Meanwhile, Santino’s Hobbs barely rises above a paint-by-the-numbers portrait of a tortured man struggling to shrug off his blue-collar past. At the same time Griffin, who previously co-starred in “Workaholics,” and Madrigal, a former “Daily Show” correspondent, receive just enough screen time to remind us that they’re in the series but not enough to take full advantage of their impressive comedic talents.

Clark Duke and Michael Angarano co-star as a couple of newbies blessed with too-perfect comedian names (Ron Shack and Eddie Zeidel) who roll into town and wriggle their way into the crew with pure pluck, and their hand-to-mouth struggle infuses each episode with desperately needed comic relief. You’ll wish that more was written for them in these opening episodes, as well as for a solid explanation of what role RJ Cyler’s character Adam Proteau plays in this series beyond providing a character to exploit and ostracize.

They’re all thrown together in this unbalanced aquarium of a storyline that almost synthesizes but falls short, and for some of the same reasons that “Roadies” failed to seduce viewers with its backstage pass to rock tours: The writers expend so much energy romancing the craft and philosophy of the entertainment that they’re illustrating that they forget to actually entertain us with that art form.

At the end of each episode, a viewer may be compelled to ask of this show, “What are you?” A curious person may stick around for a couple of weeks to figure out whether “I’m Dying Up Here” answers that question. For the rest of us, the answer is it’s just another middling TV effort that’ll end up walking the room.