Even if every allegation about Russian election meddling is true, McCain's comparison is grotesque hypocrisy 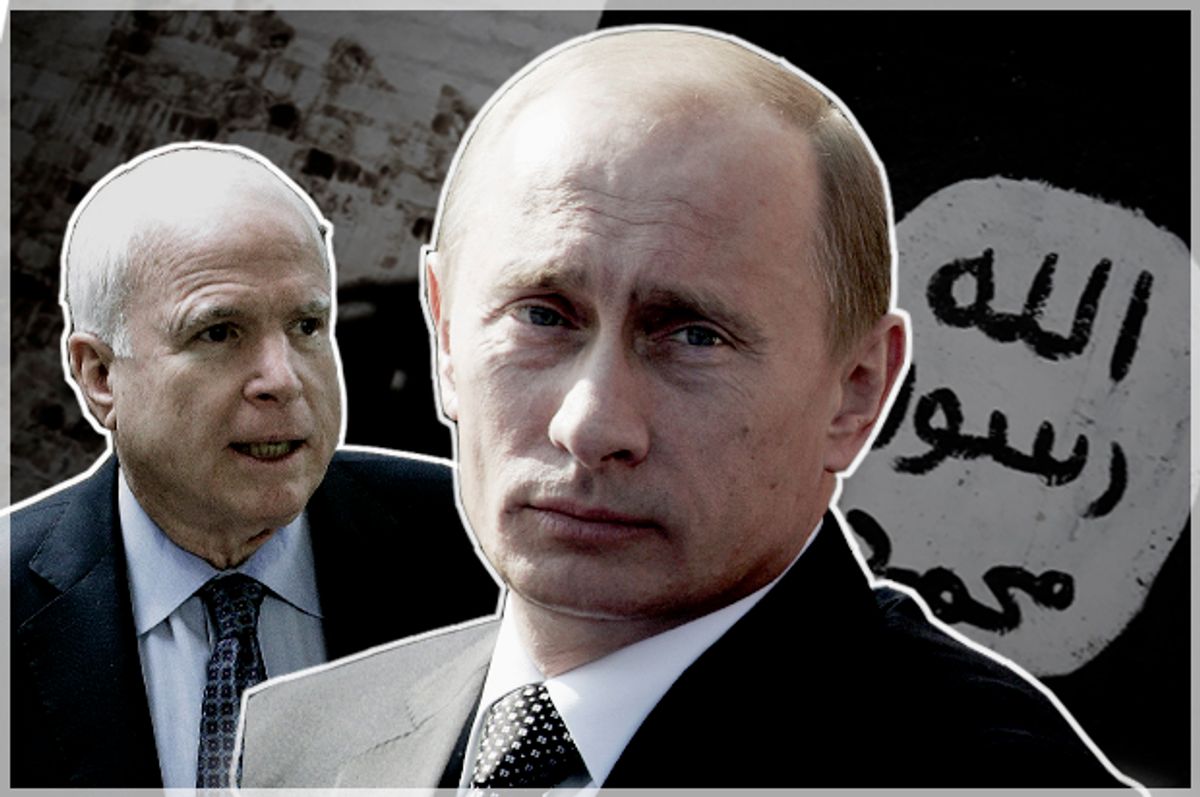 Back in March, Sen. John McCain accused his Senate colleague Rand Paul of “working for [Vladimir] Putin” because Paul didn’t support the admission of Montenegro into NATO. That presumably made him some class of Kremlin operative. At time time, Paul called McCain “unhinged” — which, given the charge, seemed like a pretty reasonable response.

Well, it seems the Arizona senator has come off the hinges again — but this time it’s worse.

Speaking on a trip to Canberra, McCain told the Australian Broadcasting Corporation that Russia, not ISIS, was currently the greatest threat to global security. Vladimir Putin, he said, is “the premier and most important threat, more so than ISIS.”

Just in case there’s any confusion, this is the same ISIS running rampant across the Middle East, beheading people, enslaving Christians and Yazidis, selling young girls as sex slaves, using women as human shields against bombs, burning and drowning people alive in cages — and training fighters to travel to Europe to carry out horrendous terror attacks.

I’m sorry, Senator, but whatever you think of the current government in Russia, it’s a gross and twisted rendering of reality to suggest that Putin is a greater threat than this barbaric group of violent lunatics.

The senator went on to say: “I think ISIS can do terrible things. But it's the Russians who tried to destroy the fundamental of democracy [sic] and that is to change the outcome of an American election.”

We’ll get to the irony of McCain pontificating on the ethics of foreign election-rigging later, but first let’s just get some perspective.

Even if every single allegation and rumor about Russian interference in last year's U.S. presidential election were true, to suggest that Russia is the single greatest threat to world security is still an exaggeration.

I don’t think there’s any doubt or debate over the fact that McCain is one of the biggest hawks in the Senate. He has yet to find a conflict or military intervention he didn’t want the U.S. to be actively involved in. But he really, really has a bee in his bonnet over Russia.

That’s dangerous because it blows the "Russia threat" way, way out of proportion. Whatever Putin's sins and crimes may be, Russia does not wish death and destruction on the United States or its people.

Now, there is a way McCain could have phrased this that would have made sense. If he had said Russia has the capacity to be a greater global threat than ISIS, he would have been correct. Russia possesses far greater military capabilities than ISIS. It is a nuclear power capable of untold destruction.

But, more importantly, Moscow has very little interest in using those capabilities to destroy Western civilization just for the lulz. Luckier still, the Russian government is no big fan of ISIS either, and is using its military resources to aid in destroying the group.

Yes, Russia is a geopolitical adversary to the U.S. There's no question about that. Oftentimes Moscow has foreign policy priorities that are incompatible with American goals. Both countries are major powers with significant influence and conflicting strategic interests in various regions. But here’s the good news: There is nothing unusual or particularly threatening about that, so long as everyone keeps a level head.

There is, however, this strange idea floating around, propagated with particular intensity by people like McCain, that Putin is simply intent on destroying democracy for kicks; that he just doesn’t like democracy and wants to mold the world to suit himself. This is an argument that does not stand up to reason — and it has nothing to do with Putin's personal opinions on democracy.

In actuality, Putin has shown very little interest in exporting any kind of political ideology to remake the world in his image. He doesn’t care about the American political system or how it works. He doesn’t care what Western democracies are doing domestically. In fact, he doesn’t really care whether a country adheres to democratic principles or not. That is immaterial to him.

Putin cares about Russia’s place on the world stage and works to gain diplomatic and military advantage for his own country. And while I hate to break it to people like Sen. McCain, that’s pretty standard behavior for the president of any influential country.

Whether Putin’s efforts in this regard have involved any collusion with Donald Trump remains to be seen. That, of course, would not be standard behavior and would be totally unacceptable — but personally, I’m still skeptical that whatever happened during the 2016 presidential campaign is a Watergate-level scandal.

But what annoyed me most about McCain’s comments wasn’t his skewed perceptions of Russia or ISIS, but the self-righteousness, the hypocrisy and the feigned outrage over the concept of election meddling. McCain is not alone in this hypocrisy. We’re seeing it across the board from Democrats and Republicans: How dare another power even attempt to mess with American Democracy! This is the most grievous of all sins! We must forcefully respond!

Around the world, most people are fully and painfully aware that there is perhaps no other country on earth so adept at interfering in the elections of foreign nations as the U.S. Furthermore, the kind of interference Washington has engaged in over the years has been far more extensive and destabilizing than, say, hacking emails and trying to embarrass the less-favored candidates. Sometimes, American interference is covert and unreported — other times, it’s right out there for all to see.

There are countless examples —  but for the sake of relevance, let’s look at Russia. It’s impossible to fully understand the strained relationship between Washington and Moscow today without understanding the extent to which the United States interfered in Russia’s own elections in the past.

American support for former Russian President Boris Yeltsin in the 1990s, especially during Bill Clinton’s administration, was unbridled. While today we see American politicians and journalists apparently deeply troubled by the notion of election meddling, back then they were less shy. In 1996, Time magazine ran a cover showing a cartoon Yeltsin holding up an American flag. The headline read: “Yanks to the rescue: The secret story of how American advisers helped Yeltsin win.”

Just try to imagine the reaction it would spark today if a Russian magazine ran a cover with a cartoon Trump holding up a Russian flag, with a similar headline: “Russkies to the rescue!"

Of course it’s unthinkable, but that is the parallel.

The Yeltsin era, to put it mildly, is not remembered fondly by most Russians. Life expectancy was declining, the birth rate was falling and the economy collapsed under “shock therapy” as the oligarchs plundered the country’s resources. That chaos eventually produced Vladimir Putin, whom a huge number of Russians regard as the leader who brought Russia “up from its knees.”

But regardless of what one thinks of Putin, it’s hard to justify the accusation that he poses some kind of realistic existential threat to the United States or its democracy out of sheer evil intent. Putin may be a lot of things, but he’s not stupid — and provoking the wrath of the U.S. beyond the point of standard geopolitical bluster probably isn’t on his bucket list.

That being said, ISIS is not the greatest threat to world security either. Ironically, what would really pose the greatest threat to international security is a continued deterioration in relations between the United States and Russia, two nuclear powers with a history of animosity, to the point of no return. McCain and others who engage in this kind of exaggeration and threat inflation at such a charged time are not helping.