The genius of Elbow, the band Coldplay wishes it could be 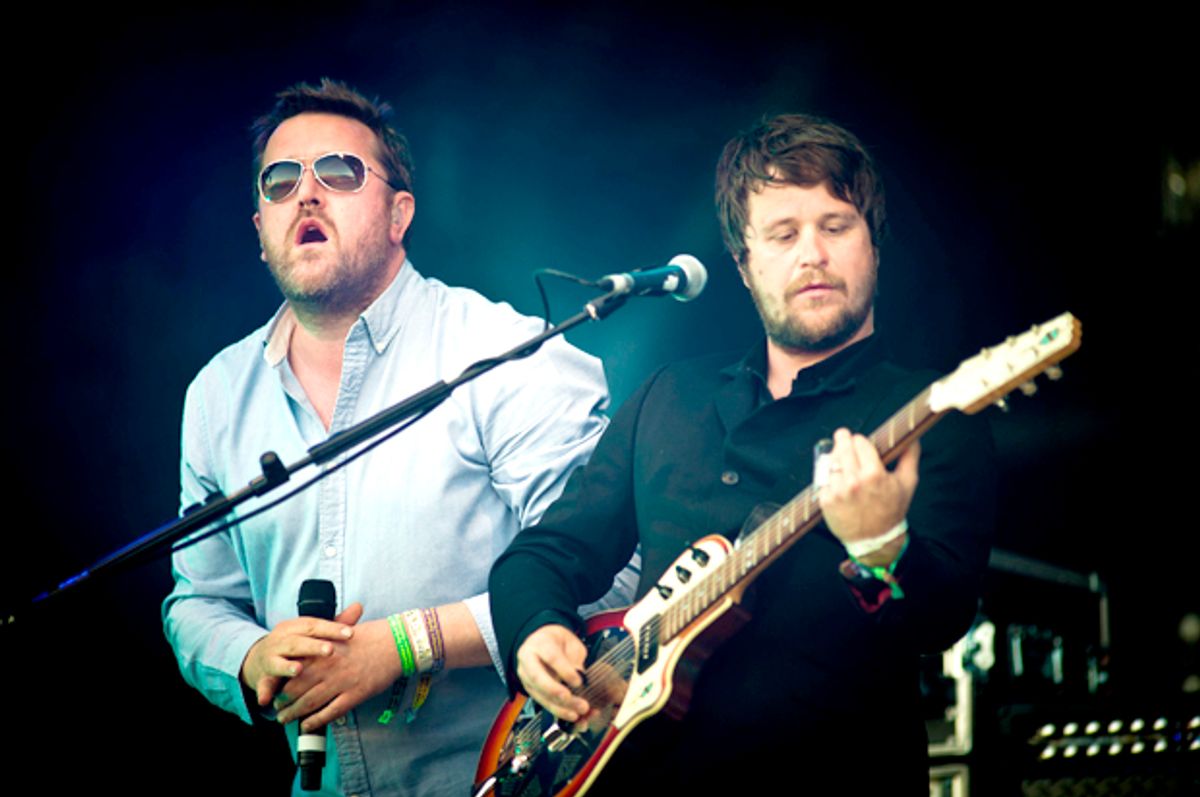 Considering that “All Disco,” the second single from British band Elbow’s seventh album, "Little Fictions," is about letting go of your obsession with music, it may seem somewhat unhealthy to admit that it’s a song I’ve become obsessed with this year. But that’s the effect that Elbow has on its fans. The group’s popularity and longevity has been built on subtle, soft, sing- and cry-along anthems, a magnetic attraction for music obsessives. Yet the genius of Elbow is that the band makes it sound effortless, as if a few lines of choice poetry set to random chords and off-kilter rhythms had been quietly tossed together in a morning-after-the-alcoholic-night-before fug of coffee and cigarettes — which, judging by singer and lyricist Guy Garvey’s interviews, is pretty much the exact artistic process.

Elbow took shape in Bury, just north of Manchester, in 1990, when guitarist Mark Potter met Garvey at college and invited him to join a band that also featured bassist Pete Turner and drummer Richard Jupp. Mark’s brother Craig later joined on keyboards (Craig Potter assumed the producer’s role for "Little Fictions"), and until last year, the five-piece line-up remained constant. That’s a degree of permanence rarely found in successful rock bands, yet you’d be hard pressed to recognize the playing members unless you were a truly hardcore fan; the group resolutely avoids including its photographs on album sleeves. Garvey, on the other hand, has become something of a household name in his homeland, where he somehow finds time to present a regular BBC radio show and curate music festivals; and he recently released and toured a solo album. He would seem an unlikely candidate for such a public role, but for the fact that he represents the very ideal of the unassuming middle-aged British everyman. Overweight and unshaven, cheerful and gregarious, a romantic poet and yet a firm realist, and resolutely down to earth — a deeply northern English set of qualities, and all of them apparent in his singing voice — he is that rare kind of pop star that looks more like a mate, the kind of bloke you feel you could have a pint with. (As, indeed, many fans have done.)

Given these attributes, and that so much of Elbow’s music has become part of the public domain, it almost makes sense that the group would, with “All Disco,” write a cautionary anthem about musical anthems. The title comes from a reply given by Frank Black (a.k.a. Black Francis of the Pixies) when Garvey asked the multifaceted Francis what genre he might next wade into. “Soul, punk, art rock,” he replied. “It’s all disco.” The meat of the song’s lyrics, however, came after Garvey was hit hard by the sudden death, which he presumed a suicide, of a young artist whose music he had played on his show. “I could hear how much of himself he put into his songs,” Garvey said earlier this year, noting that the death of the young talent “really affected me.”

By Elbow’s restrained standards, “All Disco” announces its intentions boldly. Over a slow, chiming simple guitar melody, itself atop a secondary arpeggio riff that serves subtly to remind of R.E.M.’s similarly themed “Everybody Hurts,” Garvey likewise urges his subject to stay in there. “Come to the river son,” he implores in the chorus. “Let your obsession go. What does it prove if you die for a tune, it’s really all disco, everything.” As the song builds around a rhythm section, strenuously avoiding the easy attractions of the power ballad, so increases in volume a three-woman choir, pulling us toward a middle eight in which Garvey word-plays “I can hear your tempo slowing, pull the cord,” before a grandiose and ultimately satiating final chorus. That “All Disco” is addressed to a younger performer and not the Elbow audience is, perhaps, a comfort for those listeners (like me) who take good music seriously. But it’s still a reminder, for all of us, that music should not be life or death.

Garvey further tackles the big issues on “K2,” written both before and after the British public voted in 2016 to leave the European Union. The “dickhead (who)’s done a runner” is almost certainly departed British Prime Minister David Cameron, one of the few politicians in recent times to have kept a major campaign promise (that is, to hold said referendum), and one either brave or cowardly enough, depending on one's perspective, to quit when the public did not respond according to his expectations. There follows the none-too-veiled observation of Britain as “a land with an island status, makes us think that everyone hates us, maybe darling they do.” Seemingly despairing of the future, Garvey openly pines for a life in the Andes, wearing “a sweater made of Atacama llama wool.” But escapism is not a viable solution. Ultimately, Garvey believes in a “love” that “opens the fist just enough for a hand, to slip into the hand,” a sly visual image of the human capacity for kindness. He renders this poetic service over a typically unassuming, slightly syncopated foundation that changes course only when it modulates into a chorus that barely qualifies as one. For a song of such minimal musical drama, it’s astoundingly effective.

The singer’s resolute optimism is most profound on the "Little Fictions" opener and obvious single “Magnificent (She Says).” It was written a few days into his honeymoon on the beach in Sardinia (he is married to actor Rachael Stirling), when he returned from a visit to an Internet café laden with the depressing headlines that were par for the 2016 course, but also with some music assembled by his band-mates in his absence: a syncopated drum rhythm, a choppy guitar riff, a melodious bass, a few keyboard chords . . . the basic building blocks of Elbow’s music. For lyrical inspiration, Garvey looked back to the beach, and the joyous innocence of a child playing upon it, “throwing both her arms around the world, a world that doesn’t even know, how much it needs this little girl.” These words provide the bridge to a chorus on which strings swoop in to emphasize the title, going on to dominate an instrumental section. “Magnificent” is something of a schmaltzy love song, yes, but dedicated to the children we create, not the partners we create them with.

Garvey’s profound faith in humanity may well have been tested by the recent events in the group’s headquarters of Manchester, where a suicide bomber determined that little girls, the very picture of innocence lauded on “Magnificent,” were people that the world did not need. But one suspects, based on the title track of "Little Fictions," that Garvey will remain unbowed. Over an ominous drum rhythm and equally foreboding bass line, Potter’s guitar interrupting with quiet ferocity, he weaves an especially eloquent lyric about the battles between his parents, how they affected him as a child, and yet how those parents (unlike Garvey in his own first marriage) made it through the difficulties. “Let’s get old,” he has them concluding. Elbow’s musical secret largely lies in the space they leave in their songs, and “Little Fictions” near enough brings itself down to nothing for its supposed “chorus”: sparse grand piano chords accompanied by minimal percussion, intimating a fade-out after five and a half minutes before crashing back in with a squealing guitar loop over now cascading drums, and the more familiar sound of Garvey reaching for a euphoric coda with the words “Life is the original miracle/ love is the original miracle.” At over eight minutes, “Little Fictions” is officially Elbow’s longest song; that it never drags is credit to the group’s collective sense of restraint.

Elbow’s rise to prominence was almost imperceptible, until their fourth, 2008 album "The Seldom Seen Kid" produced a couple of major UK hits, most emphatically “One Day Like This,” which the group has declared off limits for licensing deals, given its adoption by so many fans as a wedding song. Unlike other groups from its peer group who found themselves thrust into the limelight, Elbow neither wholeheartedly embraced it, as per Coldplay, nor did they reject it, as per Radiohead. Rather, they rolled with the newfound popularity, playing the closing ceremony of the 2010 London Olympics, penning further weepies (“My Sad Captains” from 2012’s "The Takeoff and Landing of Everything" has become a funeral favorite) and pulling back somewhat on "Little Fictions": although much of the new album deals with Garvey’s newfound romantic infatuation, only a couple of songs state as much directly. Even the departure of Jupp, on the eve of the recording sessions, was taken in stride; the remaining members breathed relief that internal tensions had been relieved, bade their band mate good luck with his new career as a drum tutor, recruited Alex Reeves, who had played on Garvey’s solo album, and resumed business. "Little Fictions" promptly followed its predecessor straight to the top of the UK charts; a tour of America this fall was recently upgraded to include some larger venues.

In its ability to remain commercial but cool, popular but not populist, Elbow fills a very necessary position in the musical marketplace: if not necessarily the group that Coldplay wishes it could be (though I like to believe as much), then the act that Coldplay’s fans should be obsessing over instead.