Who wears the Wonderpants? Feminists, Amazons and the fate of the world 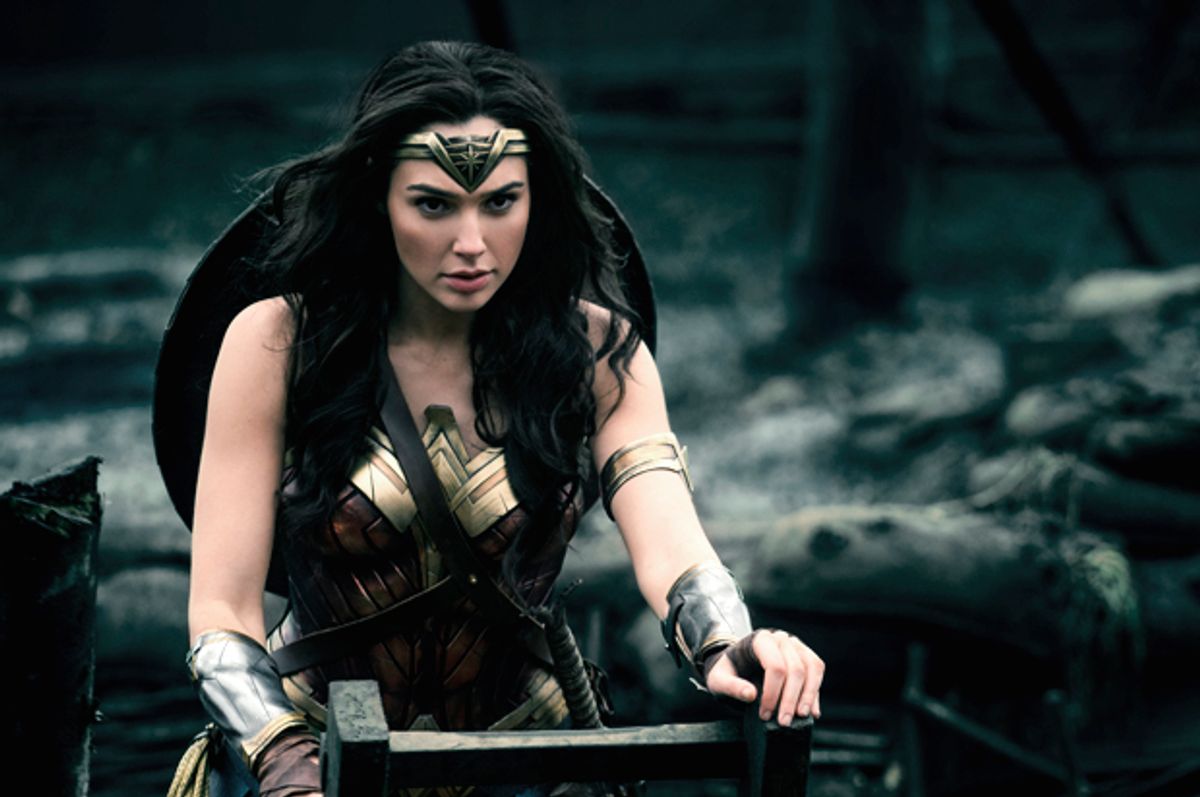 Pop culture traces the mythic question of what makes a civilized beast. Teetering on this fulcrum of meat and mind is the goddess figure, who must hold her precarious position, bring home the bacon and look damn good while doing it. She is both a sacred box and a primal symbol: the virgin mother who never betrays you or the sexy mother who will tie you up and compel you to be good. In the case of Gal Gadot, the stunning Israeli actress who plays Wonder Woman in DC’s titular blockbuster, this might not be such a bad thing.

If there was one aspect that both the early hero comics and the pulp fiction writers and illustrators had in common, it was a shared understanding of the commodity of the primal image and how the relationship between female sexuality and human behavior could be exploited. The industrial revolution enabled mass production, which enabled mass printing, which enabled mass media. Essentially, a series of interchangeable tropes and the writers who produced them eventually led to the pulps and the studio system. The pulps — a funny mix of literary fiction and junk — rose up as another popular form of mass-produced entertainment. The trope of bound women in peril became a formula to help sell magazines, as did the practice of creating the cover before the story. Thus the selling of the story became more important than the telling of the story. And nothing sold more copies than a girl in underpants and chains.

While the pulps tapped into a fantasy that wasn’t bound by cultural restrictions — think of Margaret Brundage and her naughty BDSM covers for "Weird Tales" or Bob Howard’s “Conan the Barbarian” — comics provided a pantheon of immigrant stories for kids during a time of war: Superman, leaving the old world behind for the new. Batman, the brooding orphan. Or Wonder Woman, the fetishized, supermodel psychologist in a headband and bustier. These archetypes are as timeless and primal as that scene in “Alien” when the alien bursts out of Kane’s chest in counterpoint to the real-life nation obsessing about abortion and women’s lib. Ridley Scott would never recreate this moment.

William Moulton Marston, the creator of Wonder Woman, was the only person to come up with a female superhero who stood the test of time. One of the co-creators of the polygraph test, and a PhD in psychology, Marston lived in Rye, New York, with his wife Elizabeth Holloway Marston and mistress Olive Byrne. He fathered children with both, a fact that all three kept hidden. In addition to being his former graduate student, Byrne was also the niece of birth control activist Margaret Sanger. On top of polyamory, the thrupple practiced an idealized feminism wherein the woman was reimagined as a purer, more fully realized counterpart to her male brethren. Add a little light bondage to the mix, and you got yourself a Saturday night. (For more on this read Jill Lepore’s book “The Secret History of Wonder Woman.”)

If Superheroes have origin stories, it follows that origin stories must have their origin stories too. From this den of polyamory and kinda-sorta female power hatched our leggy heroine, an ageless figure who ports a lasso of truth — the polygraph — and her bracelets, objects that are more defensive than offensive. Additionally, she is a combo of pagan virgin wisdom goddess and pin-up girl. A product of sexless birth, she leaves the all-female perfection of Paradise Island, AKA Themyscira, for the hell-pit of despair that is life among men. Though every civilization requires violence, Wonder Woman seems most likely to want to talk it out rather than fight it out.

The Amazons of legend, such as Wonder Woman’s mother Hippolyta, whose girdle Theseus famously stole, and Hippolyta’s sister Antiope, were warrior-enemies of the Greeks — the platonic form of civilization. An ironic aspect of the Amazon mythos is their reverse-rape narrative wherein their “perfect society” entails their stealing off to ravage men and then abandoning the male offspring in neighboring towns or castrating them. This is likely apocryphal, as is the one-breasted (a-mazos) moniker that was given to them by later Greek historians. IRL, the Amazons were Scythian warriors who practiced archery and rode horses.

Basically, Marston took elements of the Amazon legend and conflated those elements with a Sapphic love vibe and then dropped some good ol’ fashioned superheroism and psychology into the mix. As in Steve Trevor’s plane drops right out of a hole in the sky. In 1942, it may not have been certain how the war was going to go, but the enemy was clear. The only antidote to end German putrefaction: a gentle touch, light bondage and a swift kick in the rear from androgyne Barbie.

Then, the war ended. No more gas masks. What’s a girl to do? Post-“Jaws,” Hollywood went in the direction of  action movies. It wasn’t until the 1970s and the rise of the ERA that Wonder Woman found herself in front of an actual camera. Look at it this way, after Watergate, truth telling was at an absolute premium. Thus, the iconic TV show that gave us Lynda Carter and her infamous red-white-and-blue bathing suit and lasso of truth. Instead of Nazis, Carter eventually teamed up with Kiss to fight roller skaters and disco phantoms. Still, “Wonder Woman” remained a fantasy of feminism lite. Gloria Steinem put Wonder Woman’s cartoon doppelgänger on the cover of Ms. Magazine with the headline “Wonder Woman for President.”

Now that we find ourselves at another Nixonian era, it makes sense that Wonder Woman got a 93 percent ranking on Rotten Tomatoes. This time Israeli actress Gal Gadot plays our ageless, pagan heroine in a pair of action-ready sandals. The film is directed by Patty Jenkins (“Monster”) and has switched wars from WWII to WWI, perhaps to eliminate the problem of what to do with the concentration camp element.

Regardless, here the primal image, a scene that is so instinctive that you cannot stop thinking about it, has more to do with love than war — the movie has been marketed to women as a love story: the snowflakes Wonder Woman sees for the first time, an awkward sailboat ride at night, her goodness saving the people at the front. Yes, she’s hot and running around. Yes, she’s kicking ass and taking names and has both boobs. She might be made of pretty meat but it’s what’s inside that counts.