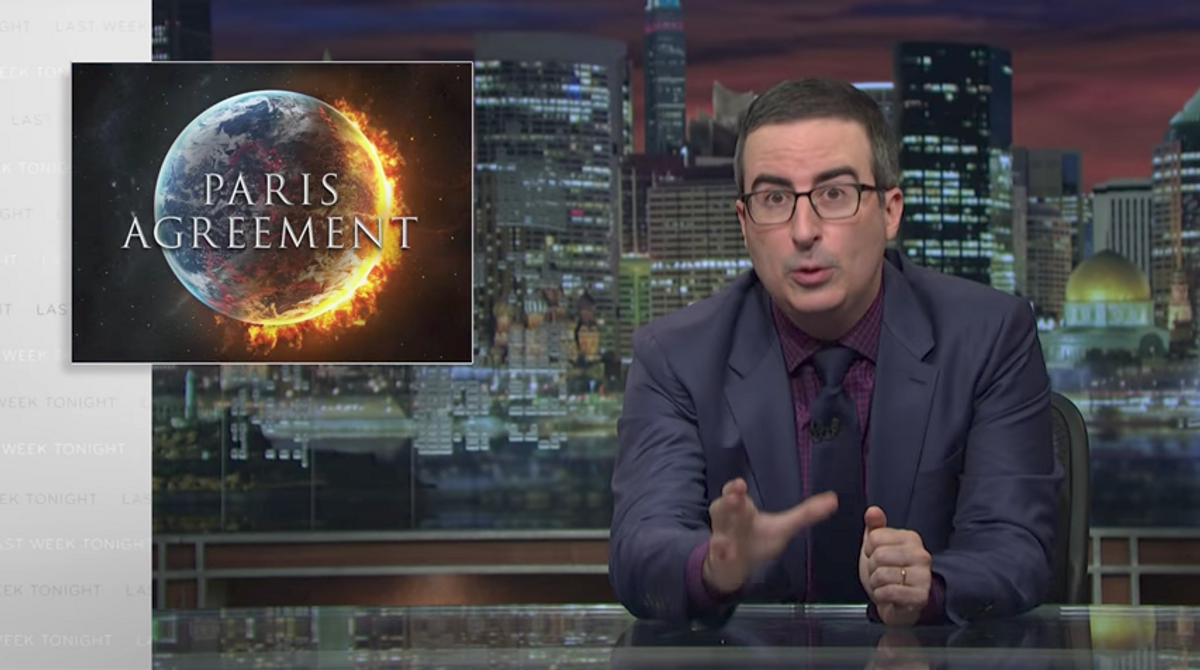 Late-night comedian John Oliver broke down President Trump's decision to withdraw from the Paris climate accord and realized it makes perfect sense because the title is so "off-brand" for the president that it might as well have been called the "Globalist cuck surrender" or a "light jog."

On Sunday's episode of "Last Week Tonight," Oliver made humor of the situation but expressed that Trump's decision was deeply concerning and that the "serious danger may actually be more imminent than you think" if proper action is not taken to prevent the planet from heating up two degrees Celsius.

One of Trump's reasons for backing out of the agreement was that he claimed the pact put the U.S. at an economic disadvantage, but Oliver pointed out that plenty of major companies were actually encouraging the president to stick to the global accord. Oliver called Trump's arguments "wildly misleading" and debunked the president's theory that the agreement doesn't allow the U.S. to shut down coal-fired power plants by pointing out that the agreement doesn't even "contain the world coal."

Oliver made clear that the agreement is not legally binding and that the U.S. is not required to commit massive sums of money and could instead just "easily refuse to pay the bill" something he said Trump "has a lifetime of practice doing." The only real penalty for not complying with the agreed upon terms is shame, which Oliver said the president is "completely immune to the very concept of that."

The late-night comedian made light of the fact that companies such as Walmart, Bank of America and Phillip Morris International "end up being the good guys." He then joked that it was as if he just said "Ebola, ISIS and that dentist who shot Cecil the lion are going to save the planet for us."

Oliver closes by noting that the debate around climate change has been riddled with failures over the years and that it's often difficult for people to relate to or fully understand. But he says that the silver lining in Trump's decision could be that people would begin to galvanize around the issue. "Apparently it was never quite enough for us to motivate ourselves out of love for this large, gassy orb. But maybe, just maybe we can now motivate ourselves to do something out of our loathing for this one," he closed, pointing to a picture of Trump.