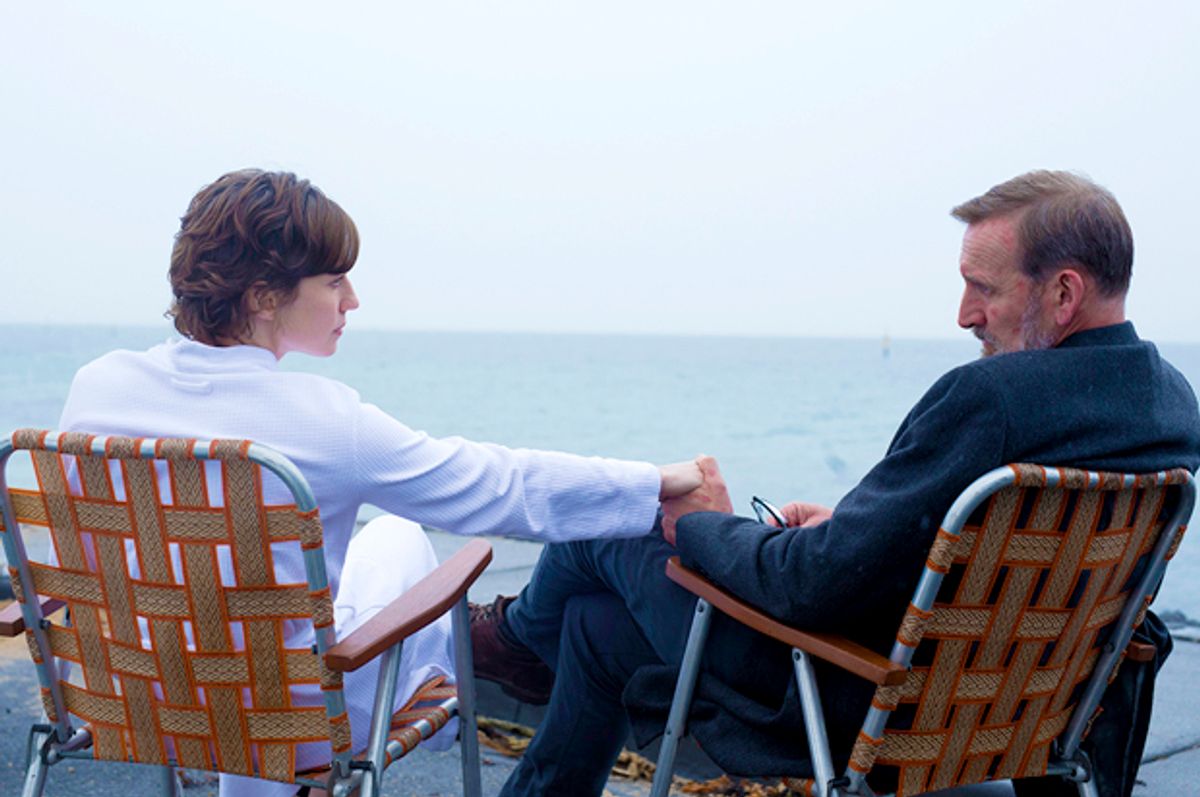 Carrie Coon and Christopher Eccleston in "The Leftovers" (HBO/Ben King)
--

Finding a superlative ending to any series is all but impossible. Damon Lindelof, co-creator of “The Leftovers,” is painfully familiar with that brutal truth, owing to the abuse he sustained concerning the way he closed his better-known creation “Lost.”

Closing “The Leftovers,” whose finale aired on Sunday night, may have posed a simpler challenge for Lindelof and his co-creator Tom Perrotta, who wrote the best-selling novel upon which the series is based. Tying up “Lost” tasked its writers to explain side universes and holes in time, oddities of physics, and theological and mythological archetypes — and that doesn’t even begin to cover the other things about the drama’s Island that the average person still doesn’t understand.

“The Leftovers,” on the other hand, is about the sting and glory of being human. Its principal characters — Nora Durst, Kevin Garvey and his ex-wife Laurie, Matt Jamison and the rest — have spent three seasons picking though the same kind of random emotional shrapnel that slices and burrows into just about every person’s flesh and spirit.

Like “Lost,” every season and many episodes of “The Leftovers” leave us with buckets of questions. But the inevitable explosions that take its characters by surprise along the way are completely understandable to anyone who loves, who laughs, who loses and grieves. Those things we get. What each individual does with those feelings is where the mystery emerges.

Lindelof and Perrotta’s drama has taken viewers to surreal places but never violated the story’s simple, central premise that we all do crazy things to mitigate the difficulty of living.

The second and third season of “The Leftovers” start in fantastic places that have everything and nothing to do with the action that follows: In the season 2 opener, a pregnant tribeswoman’s world falls apart: The earth shudders, crushing her people with an avalanche of boulders. Only a moment after she bears witness to death comes life; she gives birth by herself, and wanders alone with her newborn. She presses on even though she’s only recently been ripped in half. Then nature takes her, too; she sacrifices herself to protect her newborn. But this tale has a happier ending because another wandering woman is there to rescue the infant.

Life drops unforeseen charges into our laps sometimes, and who are we to deny that call?

This third and final season took a shorter stride back in history, to what appears to be village populated by Puritans, a number of whom are convinced that they knew when God was coming to take them. They divested themselves of their belongings and at the appointed date and time, stood on their roofs, waiting for God to reach down and take them, body and soul. He — She? It? — did not show up for their appointment. The group’s leader sets new appointments, every one of them broken by the god in which they trust. One by one members of the flock peel away, save for a devoted woman who allows everyone in her life to leave her. We see her hold fast to her faith, only to be rewarded with isolation.

Given these beginnings, ending the series in a place that makes us question when and where the action is taking place, and wonder how much of everything that came before was real, is an impish game for Lindelof and Perrotta to play on their loyal followers. But a gentle one, in the end — a miniature mystery that has an explanation.

The series finale, “The Book of Nora,” brings the season full circle to that earlier glimpse of an aged Nora (played by Carrie Coon) riding her bike in the Australia wilderness and handing over cages full of doves to a nun. It’s not a different world but yet another life in this existence. Nora runs. She always has. And following a knock-down, drag-out fight with her great love Kevin (Justin Theroux), she flees all the way to the other side of the world, after a few long stops in between.

But “The Book of Nora” also returns to the first season, when Nora is working for the Department of Sudden Departures and the agony of losing her husband and two children in a flash on Oct. 14, 2011, is still sticky and half formed. In the sixth episode of that season, “Guest,” Nora meets the author of a book about contending with “ambiguous loss” who admits that his work isn’t well-written but that it just presents a comforting idea. It’s called “What’s Next.” The period in the title is intentional, he explains, because he doesn’t have the answer to that question.

“No one knows,” he tells her. “But we can’t spend our lives waiting around for something that might never come.”

“Back,” she says, correcting him. “For something that might never come back.”

That exchange informs all about who Nora is and what she does for the entirety of the plot. She grows enraged at the man, calling the concept of “ambiguous loss,” in less than polite terms, inaccurate.

She’s right. There is nothing ambiguous about the kind of loss where a person blinks out of existence. The uncertainty lies in what the people they left behind do next.

This is the territory where “The Leftovers” builds its bizarre, beautiful groove. If the unwieldy dark first season is about rage and depression, the succeeding two uncover the magical oddity of grief.

Grieving is a singular process of course, a state that morphs, solidifies, liquefies and reforms over and over again. This is the first drama to capture, directly and metaphorically, what it’s like to grieve on a massive scale, in all its horror and humor and wonder and gloom.

That’s why episodes of “The Leftovers” can be dreamlike and occasionally silly like the finale’s so-called dance in the middle of a dusty Australian town that is shown, where funk melodies play in the air and strangers in fancy clothes curse lovingly at one another and transubstantiate their sins into carnival beads. This is where an aged Kevin, professing to no remember anything about his great affair with Nora, invites her following an unexpected visit to her small house.

Kevin explains that he’s just there vacationing in the outback and saw her on a bicycle — which, of course, makes no sense. Nora has gone to this small town to get lost again, at the end of everything.

In the first season she leaves Mapleton, confessing to Kevin that in starting over with him, she has been pretending that she hadn’t lost everything. He finds her again, nevertheless. In seasons 2 and 3 they try to move on with their lives, but she can't forget her children. She abandons real, solid reality for a chance to be with them again, alive — and that may not work.

“The Leftovers” does offer viewers who require tangible closure an explanation of what happened to the departed, but the how and why of it is never explained, and it doesn’t need to be. Neither expressly is the world into which Kevin disappears after he dies and comes back. Nor is it established that any song saved the planet — nearly everyone we love in this series is present as the series ends, and the ones who aren’t are gone for natural reasons.

Instead the greater significance of our story is coming to a firm realization about the truth and the point of living at all. And though so many of us watched “The Leftovers” together, even that is a destination to which each person arrives in a unique fashion.

We may meet others in that same place we are so sure exists — our personal Jardens, our Miracles, a community where we can be neighbors but never share the same skin. “We can’t just be going through all of this for nothing, man,” a character says in frustration much earlier this season. Lindelof and Perrotta respond to that by resolving the story of Kevin and Nora.

The answer to the questions posed by grief is connection to one another. If we have anyone in this world worth missing — not one requiring a machine and impossible science, but here — that’s a blessing. The regret of life’s missed opportunities weighs us down; they are strings of beads tangled around our necks. The fantasy of a better place keeps us going. The love of who we have and who holds us in their hearts tethers us here.