The host will talk to a series of guests who will, no doubt, call him out on his n-word use — but who benefits? 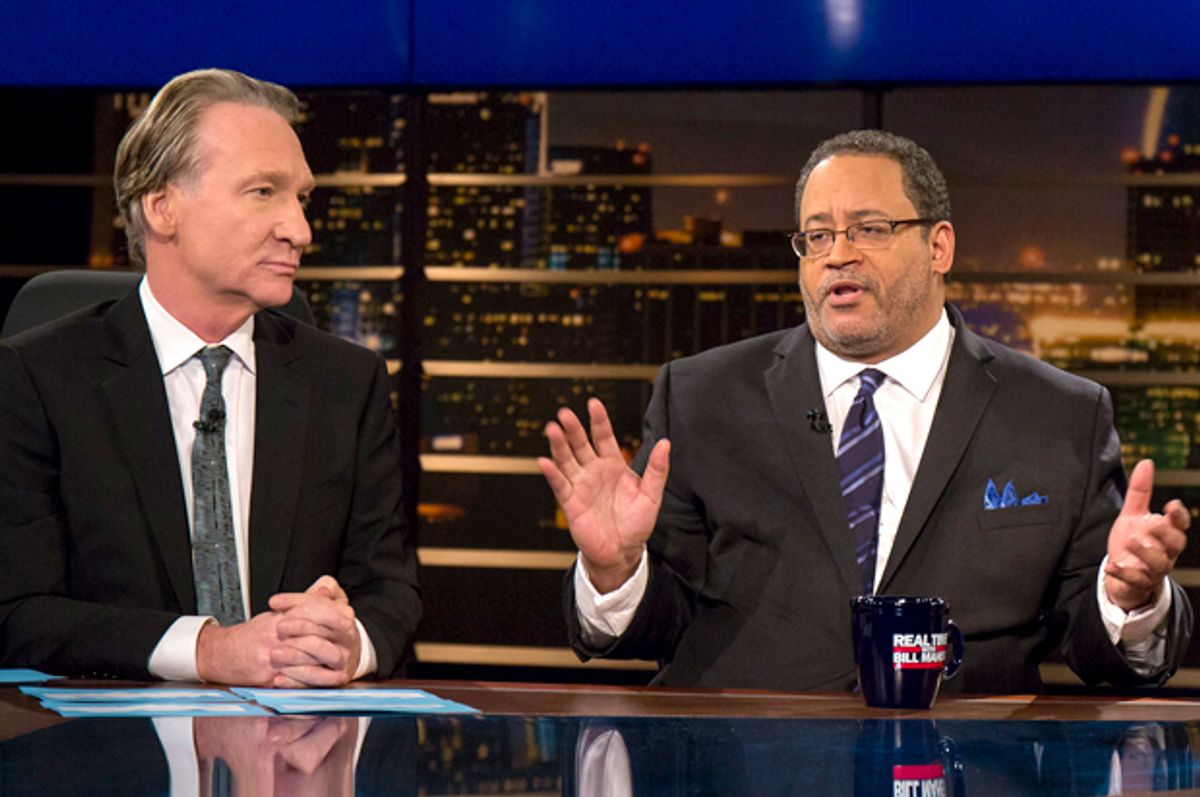 In the first edition of "Real Time with Bill Maher" since the host used the n-word to refer to himself during an interview with Rep. Ben Sasse, R-Neb., during Friday's show, the host will speak to three outspoken African-American guests: academic and progressive author Michael Eric Dyson, rapper and film star Ice Cube and liberal activist Symone Sanders.

The HBO press release announcing the guests — published at Deadline — confirms that CNN journalist David Gregory and former republican representative David Jolly will join the "Real Time" roundtable. The announcement comes a day after Sen. Al Franken, D-Minn., pulled out of the Friday broadcast citing Maher's "inappropriate and offensive" remark through a spokesperson.

According to Deadline, Maher's top-of-the-show interview will be Dyson, the Georgetown professor, prolific author and winner of numerous NAACP Image Awards.

It's easy to imagine that the subject matter of his first interview on Friday will focus on Maher's statements, the public reaction to them, his previous contrition and the profound meaning of the word he used. In many ways, Dyson would be the right person to host that talk, even if his previous statements on the matter show a propensity to forgive and champion Maher.

Ice Cube, for his part, has also expressed a desire to confront the issue in frank, direct terms with the host. As reported, a statement from the performer's representatives reads, "Ice Cube will still appear on Bill Maher this Friday as scheduled to talk about the release of ‘Death Certificate: 25th Anniversary’ edition, an album that was recorded in the wake of the Rodney King beating in 1991, which sadly, speaks to many of the same race issues that we as a society are still dealing with today.”

Symone Sanders, a democratic strategist, CNN commentator and former advocate for Bernie Sanders' 2016 presidential campaign struck a similar note. “I am still planning on doing the show Friday,” she told HuffPost. “I thought Maher’s comment, Ben Sasse’s reaction and the crowd’s applause were all equally distasteful, inappropriate and offensive. I am glad Maher too recognized as such and issued an apology.”

This is all well and good (and makes for solid television). Yet, the question must be asked: in showcasing people who are, to some extent or another, accepting of Maher's apology and willing to talk the matter out with him, is the host delivering a strong and necessary conversation on race and privilege or simply serving himself?

Certainly, the show will be on Maher's terms and — perhaps pleasingly for the famously smarmy, self-assured host — all about him. While the live format could allow his guests to throw him curveballs, he will remain in the driver's seat.

This lineup, and the fact that Maher looks willing to talk about this issue, could wind up creating an episode that's a great step forward, a true apologia combined with a real confrontation of the icky, nasty places most white liberals would rather not believe exist within themselves. Then again, it could wind up as a self-aggrandizing exercise in cynical rebranding, damage control paired with further polishing of Maher's already outsized self regard.

We will have to wait and see until Friday who benefits — public discourse or Bill Maher.