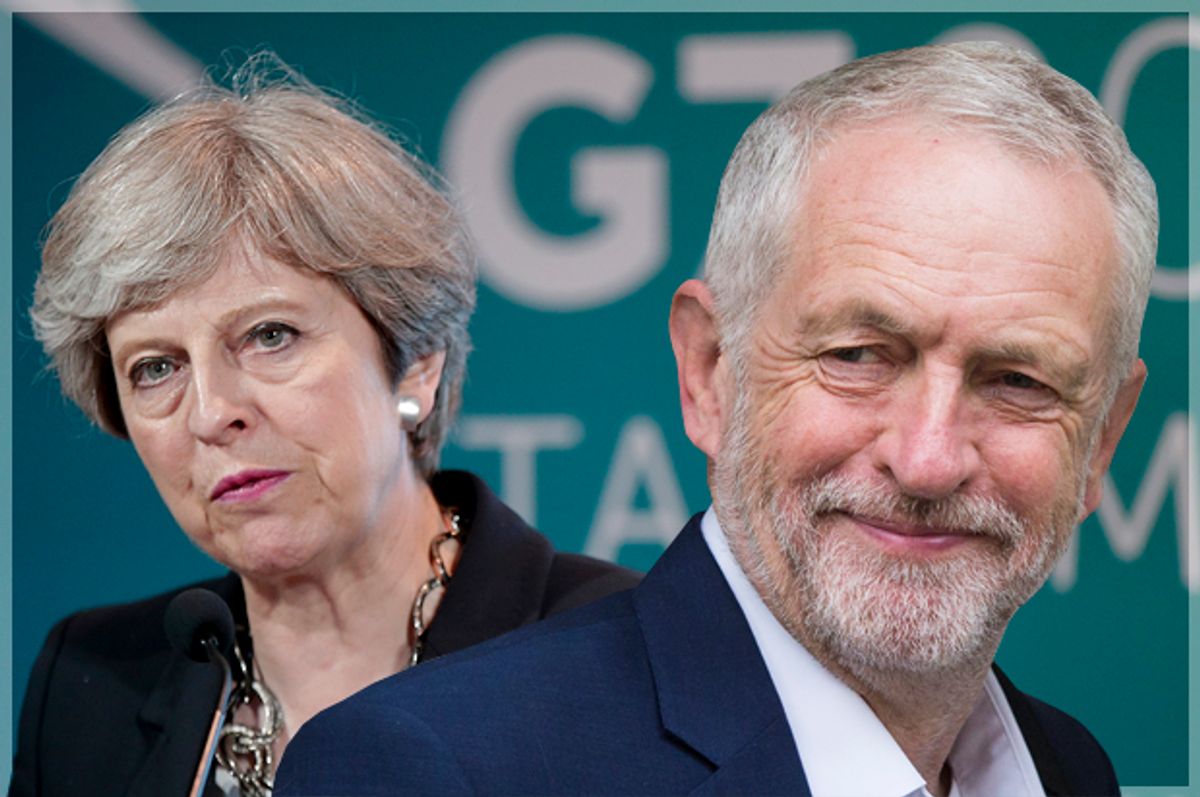 A funny thing is happening on the way to the June 8 snap election in the United Kingdom. Despite two vicious terror attacks apparently inspired by ISIS — the Manchester Arena bombing that killed at least 22 people, many of them children, and another on the iconic London Bridge that killed seven and left 22 critically injured — polls suggest that British voters aren’t fleeing in panic to the current Conservative Prime Minister, Theresa May. In fact, contrary to all expectations, they continue to swing toward May’s hard-left Labour Party opponent, Jeremy Corbyn, with the latest poll showing the two parties neck-and-neck.

May launched her campaign on on April 18. With polls showing her party anywhere from 15 to 20 points up on Corbyn and Labour at the time, and the favorability gap between her and Corbyn even wider, she hoped for a blowout victory that would boost the Tories' position in Parliament to a record level. But since then she and the Conservatives have been watching their support crumble as Corbyn's has grown. Now many British news organizations are talking about a Tory “collapse.”

It’s now being suggested, even in the right-leaning media, that when the votes are counted Thursday evening, Britain could face an unexpected and murky situation. There could conceivably be a "hung Parliament," where no party has enough members of parliament to form a majority government. If the Tory collapse continues through Thursday, Labour, which earlier appeared doomed, deemed could come out ahead in the popular vote as well as the parliamentary seat count. It's even possible -- although admittedly unlikely -- that Corbyn, once written off as a hapless relic of the past, could win outright and become Britain's most left-wing prime minister since at least Harold Wilson in the 1960s..

For that scenario to play out, young people aged 18 to 24, whom polls show favor Corbyn and Labour by huge margins, would have to do something they heretofore have never done: Go to the polls in massive numbers, instead of just telling pollsters who they like best and then ignoring the ballot box.

Traditionally, as in the U.S., it’s older folks who vote, not young people. But this year things could be different in the U.K. It wasn’t that long ago that British college campuses were erupting in protests because the Conservatives in parliament had pushed through punishing increases in college tuition. Meanwhile, youth unemployment is high and housing is expensive. There is a lot of frustration among the young in Britain, and Corbyn and a revitalized Labour Party, moving way to the left compared to the New Labour heyday of former Prime Minister Tony Blair, are offering policies that address all of it. They’re addressing the social and economic concerns of older voters too.

Corbyn, on the stump, has called for renationalizing Britain's shabby and costly privatized public transport system; vastly increased funding for the country’s once vaunted National Health System, which has been underfunded and picked apart like carrion over the years by Conservative and Labour governments alike; a major campaign to construct new public housing; tuition-free higher education; and improved pensions for the elderly.

What is really striking is that Corbyn, a lifelong anti-militarist, has stuck to his no-guns position even as terror has struck, blaming the attacks, at least in part, on the British government’s unquestioning support for U.S. war in the Middle East and North Africa, and its equally unquestioning provision of arms to authoritarian regimes in the Middle East like Kuwait, Saudi Arabia and Bahrain that, as he points out, are promoting conflict and terror across that region and particularly in Syria. Corbyn has also hit hard at May’s decision to cut funding for local police even as she’s been calling for giving police more powers to perform surveillance and make arrests.

“You can’t fight terrorism on the cheap,” Corbyn is saying, calling for the hiring of more bobbies on the street. He’s also calling for an end to Britain’s military interventions abroad, from Afghanistan to Libya and Syria, saying, in a speech made immediately after the Manchester bombing, that “the war on terror is simply not working.”

Apparently British voters, tired of enduring an endless string of terror attacks, and tired of years of costly spending on military adventures in support of an endless America "war on terror," are beginning to believe that Corbyn makes more sense than May and the Conservatives. Even attacks by May and the Tories on Corbyn’s long ago remarks about the Irish Republican Army (he said that both sides in the Northern Ireland conflict — the British army and the IRA -- were guilty of violence) haven’t dented his growing support.

It will be interesting to see how all this plays out. If Thursday’s election results in a hung parliament, we may have a while longer to watch. With few partners to turn to among the smaller parties, both the Tories nor Labour might be unable to cobble together a coalition government. (The Scottish Nationalist Party, for instance, may not be willing to help either of them.) That would mean the calling of a new election, and possibly more time for people to continue swinging towards Labour and Corbyn, who keeps defying his critics in the British media and in his own party.

Perhaps if Corbyn comes out on top in this election or the next, some American politicians may decide it’s time to stand against our almost two-decade-long and manifestly failing War on Terror, and to ramp down America's self-appointed role as Sole Superpower and Policeman of the World.