Guns are America's problem, not terror 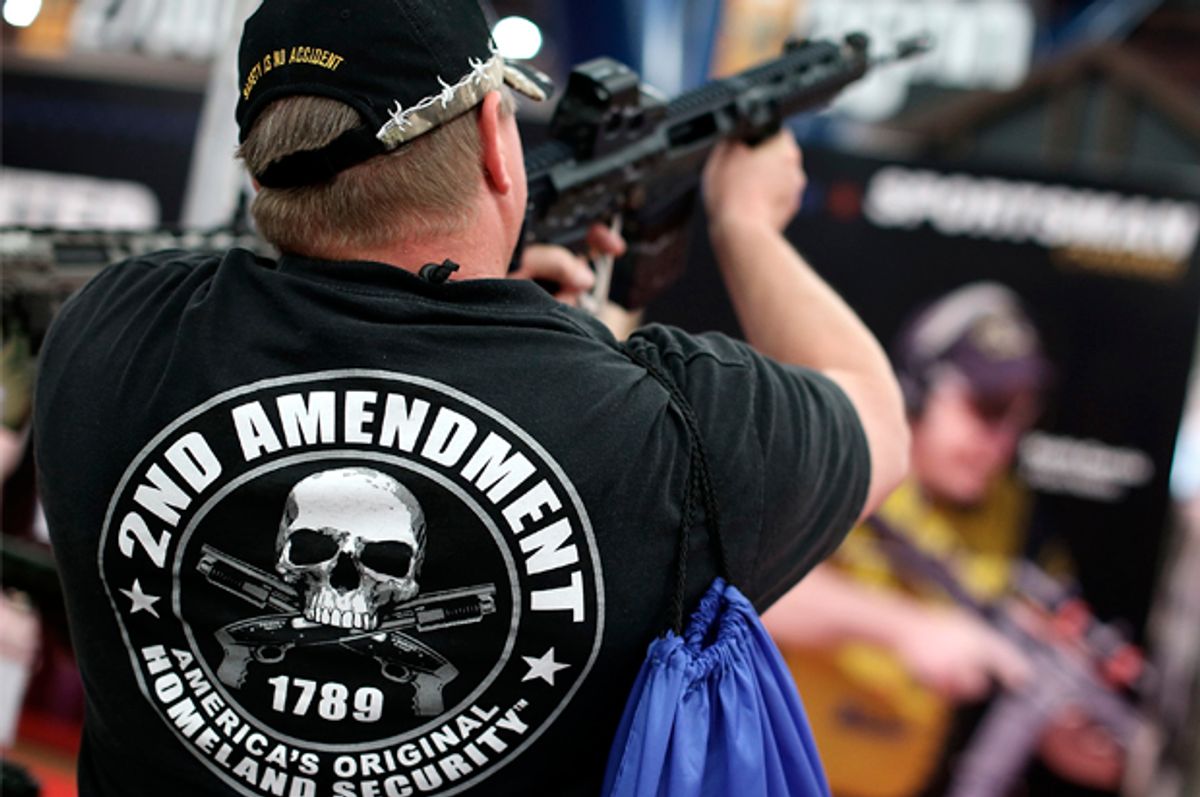 It’s never a good thing when you’re sent somewhere far away at great expense to cover a story that fails to materialize, which is exactly what happened when the Village Voice sent me to Israel in the fall of 1974 to cover the war with Syria over the Golan Heights that never happened. There I was, burning through my expense account at a beachfront hotel in Tel Aviv with no story. I knew exactly one person in Israel — John Broder, a cub reporter for the Associated Press, and I was hanging around the AP's Tel Aviv bureau one evening while Broder was on night duty when a call came in that there had been a terrorist attack in a tiny village near the border with Lebanon.

Broder and I jumped in his Volkswagen and drove up there. It turned out that a couple of Palestinian terrorists had killed a Druze man in his home. His name was Subi Mussa. He lived in a simple ranch-style house with his family near the border. Soldiers on the scene said the terrorists had come over from Lebanon wanting to kill Jews and happened upon a man who was Druze by accident. We interviewed his widow and brother and talked to the army guys who chased down the terrorists and killed them. Then we drove back to Tel Aviv and I wrote a story for the Village Voice about terrorism.

It wasn’t the story I was looking for, but terror had had Israel in its grip for months. In April three Palestinian terrorists had crossed the border into Israel from Lebanon and shot up a building in the small settlement of Kiryat Shmona, killing 18 and wounding 16. Nine of the dead were children. In May three more terrorists crossed into Israel and took 115 hostages in the Israeli village of Ma’alot. Twenty-two civilians were killed and 50 were wounded. In June three terrorists came ashore in a rubber boat in the coastal town of Nahariya and killed three civilians and one soldier. The killing I wrote about was followed quickly by another attack by terrorists coming ashore in Tel Aviv in an inflatable boat armed with AK-47s and explosives.

On a chilly December night Broder and I had plans to go to a movie at the Hen Cinema near his apartment, but the chicken his girlfriend had in the oven smelled so good, we decided to stay in and eat and go to the late show instead. At the theater a few minutes later, a terrorist stood up in the balcony and threw three grenades into the orchestra seats, killing two and injuring 58 other moviegoers before blowing himself up with a fourth grenade.

When the news hit the TV a few moments after the attack, we grabbed our press passes and ran up to the theater and watched as medics removed the dead and wounded on stretchers, pushed them into ambulances and sped away into the night. Seats in the theater were covered in blood and body parts. Yet another story on terrorism — this one a little too close for comfort for Broder and me. Similar one- and two-man attacks with guns and explosives happened weekly. Few, if any, of the attacks made the papers. In Beirut later that month bombs were going off nightly, part of a terror war being waged between Palestinian factions fighting for dominance in Lebanon. Few, if any, of the bombings made the papers.

The Israelis adjusted. They began searching everyone going into movie theaters. They increased patrols along the border with Lebanon and along the coast. Increasing numbers of armed soldiers were visible on the streets of Tel Aviv and Jerusalem and other towns and villages. In Lebanon terror bombings morphed into a military tactic. Only months remained before nightly terror attacks became a major war.

Back in the U.S., at least until 9/11, terrorism remained something you read about in the papers, if you read about it at all. We had two oceans and about a ton of hubris to defend us. But the rest of the world didn’t. The rest of the world suffered one terror attack after another. Terrorism is the way people who don’t have F-22s and tanks and aircraft carriers and nuclear weapons fight back against forces they believe are oppressing them. Terror attacks are cheap. Terror attacks are comparatively easy. Terror attacks, nowadays anyway, garner saturating media scrutiny irrespective of their sophistication, effectiveness or scale. Because of this, acts of terror here and elsewhere aren’t going away. The question is, What do you do about them?

Our president weighed in last weekend with tweets he sent out on Sunday morning not long after the attack in London: “We need to be smart, vigilant and tough! We need the courts to give us back our rights. We need the Travel Ban as an extra level of safety.” Then he tweeted this: “Do you notice we are not having a gun debate right now? That's because they used knives and a truck!”

The president’s off-the-cuff tweets weren’t just disingenuous and irresponsible. They were lies, both of them. You have a better chance of being struck by lightning than you do of being killed by a terrorist who is not from this country. Last summer a man by the name of Omar Mateen walked into the Pulse nightclub in Orlando, Florida, armed with a Sig Sauer MCX semiautomatic rifle and a Glock 17 semiautomatic pistol. He was an American, born in New Hyde Park, New York. Over the next few minutes, he shot and killed 49 people and wounded 58 others, took hostages and ended up being killed in a shoot-out with police three hours later. Can you imagine how many would have died in London last Saturday night if the three terrorists had been armed with semiautomatic rifles and pistols rather than a truck and three knives?

Arie Perliger, director of terrorism studies at the U.S. Military Academy, has pointed out that more and more terrorists in this country are using guns since the United States increased regulations on explosives and various chemicals and fertilizers that can be used to make explosives. According to Erin Miller, manager of the Global Terrorism Database, every terrorist attack in the U.S. in 2016 was carried out with firearms. Since 2002 85 percent of all terrorist attacks in this country have been carried out using guns.

San Bernardino, Charleston, Fort Hood, Orlando, Aurora — we all recognize these places where people died because someone decided to use a gun in an act of terrorism: 49 dead; 9 dead; 14 dead; 13 dead. Dozens wounded. To pretend otherwise by tweeting about trucks and knives as if they were the usual weapons of terror in this country is a lie. But it’s also a lie to act, as the president does, as if terrorism is the greatest threat this country faces. This was the motivation behind his famous “travel ban” against seven largely Muslim countries, behind his famous pledge during the campaign to “ban all Muslims” from entry into this country “until we can figure out what the hell is going on.”

This is what a huge problem Islamic terrorism is for us in the United States. According to the a study by the New America Foundation, since 2002 there have been 10 attacks by Islamist terrorists on American soil. A total of 13 individuals carried out those 10 attacks. Eight of them were born here, making them American citizens; five were born elsewhere but were in this country as legal residents. According to the study, during the same time there were 390 acts of domestic terror in this country. Dylan Roof''s killing nine people in a church in South Carolina was one. James Earl Holmes' shooting up a movie theater in Aurora, Colorado, killing 12 and wounding 70 was another.

And yet for all the guns, for all the attacks, an incredibly small number of people are being killed by Islamic terrorism here. According to a Cato Institute study, an average of six people a year have been killed by American-born Islamic terrorists over the last 15 years. Foreign-born terrorists have killed an average of one person a year in this country during the same time. According to the same study, an average of 21 people a year have been accidentally killed by very young children using their parents’ guns. Each year since 2002, about 12,000 people were killed by guns wielded by adults in this country.

This is how we regulate these deadly weapons of terror: In 25 states you don't need a license at all to carry a firearm openly. In seven states you can open carry firearms without a license except for in certain urban areas. In 15 states you can get a license to open carry a firearm. In every state in the union  it’s legal to own and keep loaded weapons in your house. You can use those firearms to defend yourself if threatened with bodily harm, and in an increasing number of states you can, in effect, shoot first and ask questions later when threatened.

People on the no-fly list of suspected terrorists can buy a gun anywhere and use them the same way any other person can.

In every state in the union you can walk into a gun show and buy a firearm without showing an ID or going through any federal registration process.

The National Rifle Association is currently busy trying to get a law passed by the Republican Congress and signed by the Republican president that would make open-carry laws virtually nationwide by allowing gun owners to open carry firearms across state lines without regulation, effectively turning the entire country into an open-carry state.

On the other hand, trucks and knives are heavily regulated in this country. You have to register trucks or any other wheeled automotive vehicles in every state in the union. In every state you are required to carry insurance on these vehicles. You need a driver's license in every state of the union to operate a truck. You need a special driver’s license to drive certain classifications of trucks. Most American municipalities have laws regulating the carrying of knives with blades of specified lengths and ban the carrying of knives like switchblades altogether. The weapons of terror used in London are heavily regulated in this country.

Which weapons of terror do we regulate? The wrong ones. How many of us are there? 325 million. How many Islamic terrorists have there been? Thirteen. Let’s stop lying about terrorism and engage in that debate about guns.