Games like "Papers, Please" and "Cart Life" are empathy exercises. Virtual experiences can have real-life impact 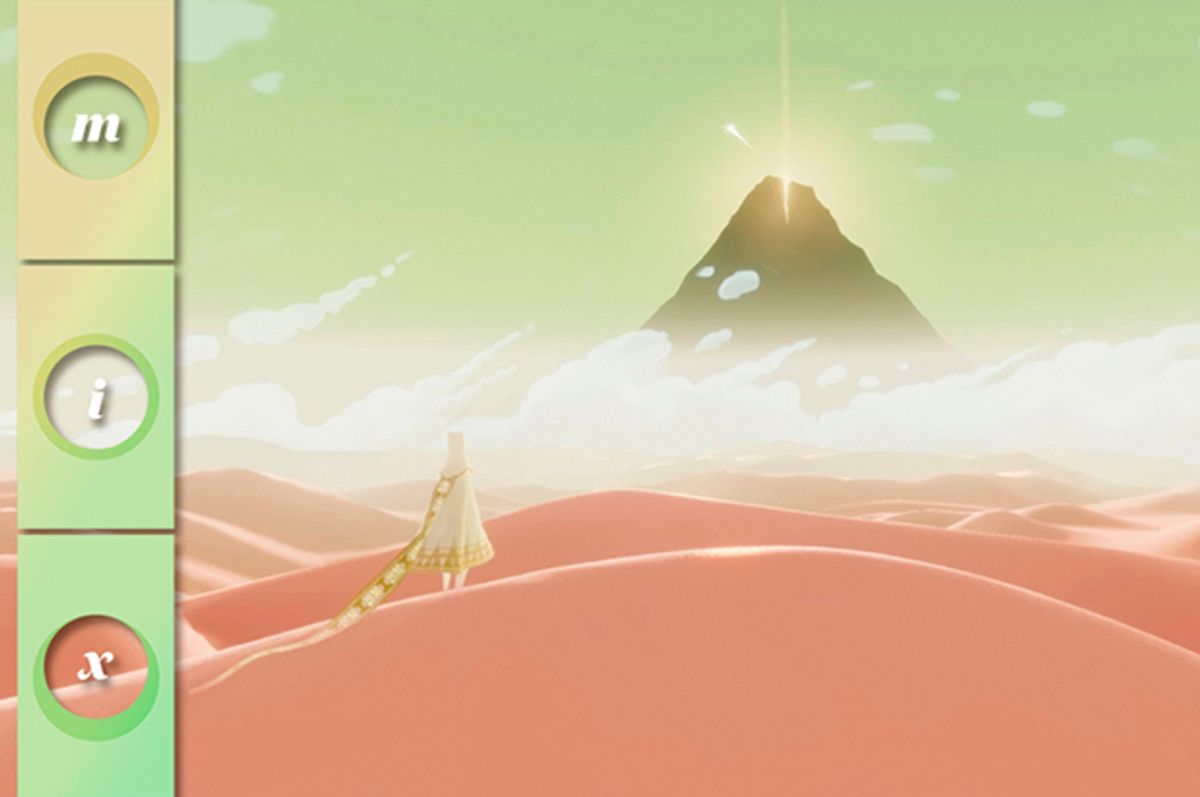 In 1991 before I was even born, my father purchased a Super Nintendo Entertainment System for my older sister. That system spawned plenty of long play sessions of "Super Mario Brothers" and "Donkey Kong Country." And while my sister regarded it more as a distraction than a marvel, I was entranced from the moment the 16-bit curtain rose. The honky-tonk title music of "Super Mario Bros. 3" still occasionally rings in my mind.

My performance while playing the secondary character Luigi was lackluster; my sister, as Mario, dominated the game. And I was jealous — frustrated that I couldn’t "beat" certain levels without her help, that I couldn’t learn the enemy patterns of a given level or figure out how to control the slightly floaty sprint of my character. But I was determined all the same. My sister’s interest in video games fell off, but I have continued to play ever since.

As I played more and more, I started noticing that different games made me feel different ways. A game as simple as "Tetris" made me feel the anticipation. I built and built my accumulation of blocks until I finally got that four-block “TETRIS.” (That's done by filling in four solid rows of blocks.) And then I started all over again. A complex game like "The Sims" could make me feel the overwhelming pressures of life. Something as simple as making time to go to the bathroom or to grab something to eat could become a burden with multiple characters.

But it wasn’t until one humid summer night that I truly started to be conscious of these game-induced emotional states. Fresh out of my first year in college, stoned and without a care in the world, I sat in my friend's basement and played That Game Company’s "Journey."

It's probably obvious, but "Journey" is not a game about the destination.

The player's character, a hooded figure, starts the game in the middle of a vast desert, moving sluggishly through the sand until eventually reaching the top of a sand dune. Naturally, I wanted to slide down the dune in a cinematic flourish. As my character took its first couple of steps, I started to feel momentum build.

You are cold. A strong piercing wind doesn't let up. It pushes against your body. It moves through you.

You hide behind a small stone pillar barely able to protect you from the wind. Your scarf is long, but the end of it is frozen, rendering you unable to jump or glide as you might usually be able to. All you can do is make one noise — a symbolic "blip" that you've used to communicate with a companion you've shared your journey with. Your companion is next to you, with a frozen scarf as well. You are both useless in this weather.

You two have created a bond. You've shown each other secret caves with "power-ups" (or enhancements) that grant you a longer scarf, which directly corresponds to your ability to glide longer distances.

You blip back and fourth to each other; it's your only form of communication.

You reach a castle-like structure. The wind rips through, creating a tunnel. Your companion and you take turns waiting for the wind to die down, giving you the chance to advance forward. You both turn a corner and pass through a large archway. Beyond is a large field of snow and nothing else, except for wind.

You realize there is no cover to protect you from the wind. Still both your companion and you push forward. You blip; he blips back. You continue this as the wind continues to rush against both of you.

Your blips become quieter. But you try to blip to indicate to your companion that neither of you is alone.

The wind continues to pick up almost impossibly so.

Your blips become even quieter. Still you try to blip in quick succession to grab the attention of your companion. He is starting to become hard to see.

The wind forcibly prevents you from moving further. You can still see your companion.

You cannot blip anymore. You do not have the energy.

Your companion has disappeared. That high moment on that summer night made me realize that games are more than just something to distract me, more than mindless entertainment or violence simulators. Through an intense feeling of companionship and camaraderie I was emotionally affected — devastated, even — at what I just experienced.

Video games are an art form. They make a player feel. "Journey" helped me understand how and why games could make me feel just as much books, movies and TV do.

You receive a letter in the mail. It reads as follows:

Congratulations. The October labor lottery is complete. Your name was pulled. For immediate placement, report to the Ministry of Admission at Grestin Border Checkpoint. An apartment will be provided for you and your family in East Grestin. Expect a Class-8 dwelling. You show up to work at the Grestin Border Checkpoint, nervous and unsure of the rules. You read the Ministry of Admission’s official bulletin. It welcomes you to your new position at the border checkpoint. You’re instructed to stamp passports and entry visas — and deny all foreigners. As always, the motto is “Glory to Arstotzka.” You set aside your bulletin and prepare.

You call for the first civilian. The winding line moves forward, slightly. The PA system echoes throughout the checkpoint. An elderly woman, frail and homely, approaches your window. She hands you an Arstotzka passport and she sighs with relief. “Finally, I can return home,” she says.

You examine it carefully, making sure all the dates and requirements are in order. You stamp the passport “Approved” and hand it back to her. As always, you exclaim, “Glory to Arstotzka,” and let her through.

This is “Papers, Please,” a game by Lucas Pope. It might sound boring to play an immigration officer controlling the influx of immigrants and citizens, but it’s terrifyingly relevant in our world today. The player deals with with spies, hidden smugglers and government strongmen who will try to squash the criminal activities in his country.

As the game progresses, it quickly escalates the player's responsibility. Every day brings new entry requirements like work visas, permits and fingerprint checks. There are wanted criminals and counterfeit documents to watch out for. The stress level increases, and the pressure to perform affects a player's success. In a game, a player learns to “do the best.” Whether that involves collecting all the coins, getting the best score or just surviving, a player has clear goals.

With "Papers, Please," the player, as an agent, is given an allowance based on how many people are processed through his or her checkpoint. The agent is fined for mistakes. At the end of the day, the balance is expected to pay for heat, food and rent for the agent's family. Failure to provide these necessities results can result in suffering and eventual death for the agent's family. Once the agent's family dies, the game is over. The player has lost.

Quickly the game becomes a series of moral choices: Should I provide for my family or should I let this innocent old woman through despite her lack of proper paperwork?

These emotions force a player to identify with the immigrant and the bureaucrat. The player has the choice to work “against the game” or to take the path of least resistance. It’s all a balancing act.

Yager Development’s "Spec Ops: The Line" follows a typical action-movie character through the deserts of Dubai during the worst sandstorms in history. The U.S. military attempts to aid with an evacuation by sending a battalion into the desolate city. It fails miserably.

You play Capt. Martin Walker, leader of a covert group ordered to confirm the presence of survivors in the city.

Your mission quickly develops into a arduous firefight throughout the city as you try to stop the original deployed battalion from rounding up civilians. Mindlessly you shoot “the bad guys” to try to save the prisoners.

The game reminds you constantly that you, as Capt. Walker, are not in control:

“We have no choice.”

“You think I want to be killing people?”

“There’s nothing we could have done.”

There is no agency.

You’ve made attempts to eliminate the enemy and save civilians. When presented with an insurmountable task — infiltrating a heavily guarded base, say — a chemical agent called white phosphorus is conveniently within reach.

“Burn 'em,” you say as you fire the first chemical mortar.

You can hear the mechanical click of the mortar's targeting system as you aim at anything that moves. Enemy fire whizzes over your head as you continue to fire mortar after mortar.

“Burn 'em,” you say again. You can see yourself — Capt. Walker — reflected in the screen of the targeting system, dirty and bloody. You don’t know if it's your blood or that of your enemies.

“Burn 'em,” you say yet again. You can hear the screams of agony coming from the enemy.

“No one’s moving, it’s over,” your partner claims.

Silence rings. You walk toward the burning camp; there are bodies everywhere. A chemical ash floods the air.

“There’s nothing we can do,” you say to your squad.

As you walk toward the back of the camp, you’re confronted by a mortally burned soldier begging, “Why? We were helping.”

You look around, beginning to realize what you've done. A group of grotesquely burned civilians are huddled behind a wall  — 20, maybe 30, all dead. As you step over bodies, your squad asks where they came from. You stare at a burned mother holding her child, still and lifeless. “We need to keep moving,” you state lifelessly.

You have no choice. You have no agency. Yet you still continue on. The game forces you to do what you don’t want to.

Your character starts to become mentally unhinged. The hoorah-U.S.-of-fucking-A attitude is gone, replaced by anger, confusion and anguish.

Games like this make their players feel intense emotions, just like any other art form does. There is a lot of evidence describing how movies, books and TV can promote empathy. And while nothing can compare to real-life experiences, passive media experiences can be enhanced by one quality: agency. By being able to actively control and participate in the outcome, a player can form a deeper connection to the experience.

As we continue to learn more and more about the effects of video games psychologically, we can use these insights to positively influence our culture. Studies show that violent video games do not have a significant impact on aggressive behavior, and yet the idea persists that video games with violent content cause real-life violence, with scant attention paid to how many video games tackle issues that are important and relevant.

Take "Depression Quest," an interactive text experience that simulates a life of dealing with depression. Or "Freshman Year," a game where you play being a high school girl and experience unwanted sexual harassment. "Papo & Yo" tackles the issues of parental abuse metaphorically by depicting the player's parent as a giant monster. "Cart Life" is a game that showcases the struggling working-class experience by putting the players in the shoes of a poor street vendor who has a family to look after.

The experiences may be virtual, but the emotions they spark — and the understanding of other people's lived experiences through them — are real.