A wild ride on Comey Island: Russia tried to hijack democracy and Donald Trump didn't even pretend to care

Did Trump obstruct justice? Maybe — but he cared more about Michael Flynn and the "pee tape" than democracy 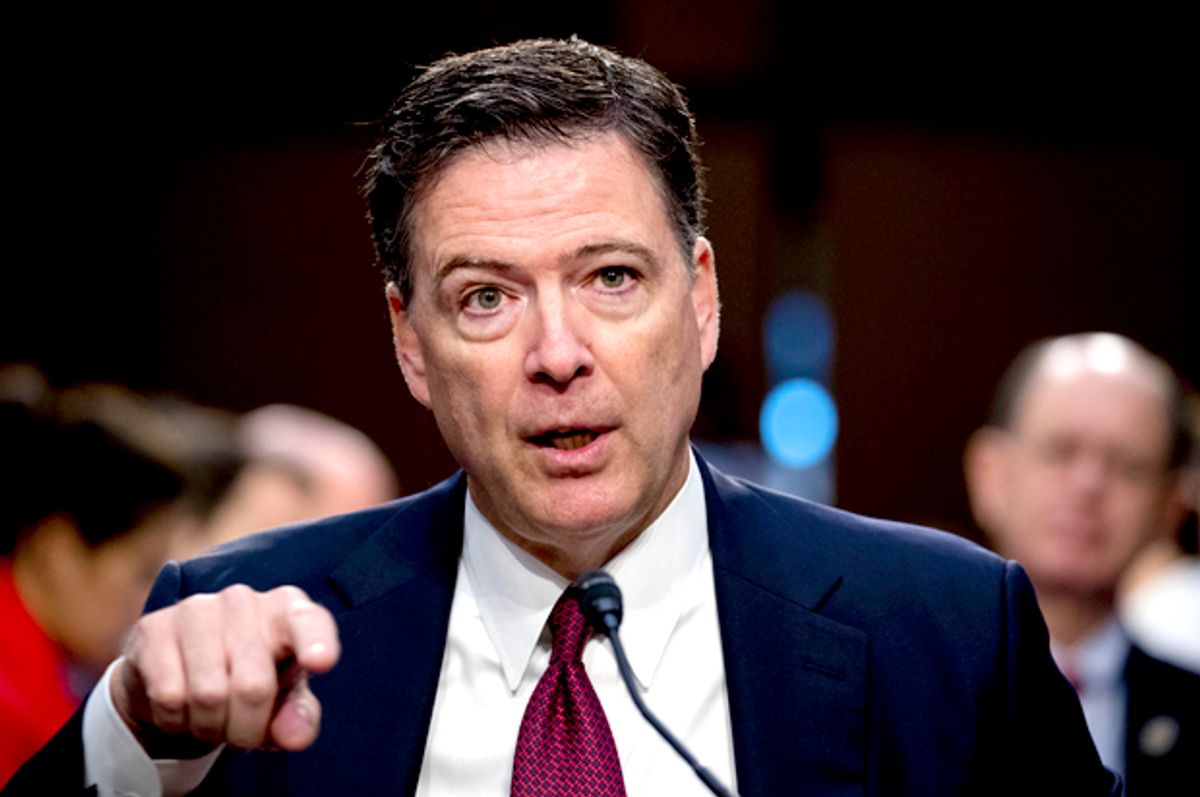 Before James Comey testified before the Senate Intelligence Committee on Thursday morning, some of the more cautious pundits warned members of the public to moderate their expectations. There was little reason to think the former FBI director would reveal any bombshells that had not already been reported over the months of news reporting on the investigation of Russian meddling in the election and the possible culpability of members of Donald Trump’s presidential campaign team.

Those pundits turned out to be mostly correct. There was no dramatic moment of “What did the president know and when did he know it.” There was no “At long last, have you no sense of decency?” (In the case of President Trump, we have long had the answer to that question.)

What power there was to Thursday’s testimony came from hearing all the stories that have dribbled out over the months laid out in one place, in the setting of a Senate hearing room. This came from Comey, who has been mostly silent since his surprise firing just over four weeks ago, taking the opportunity to defend himself and denounce some of the president’s statements about his firing as “lies.” It also came from the longtime law enforcement professional's surprisingly candid admissions that perhaps he had not been strong enough at the time of his encounters with Trump to push back against requests he knew to be outside the bounds of the traditional relationship between the White House and the FBI.

It seems to me there are two big takeaways from Thursday’s hearing that should concern Congress and the general public.

The first was Comey’s statement, in no uncertain terms, that Russian agents meddled in last fall’s election through a campaign of computer hacking and spreading disinformation and he believes they will do so again. There are still plenty of skeptics, Republicans among them, who keep dismissing such allegations as xenophobic nonsense. Or they deride them as immaterial because there is no evidence that the Russians managed to hack voting machines and change vote totals.

There is no reason for Comey to make so forceful a statement at this point unless he truly believes it. He just issued a full-throated warning to the country that the sanctity of our elections is under attack. We need to take it seriously, and take steps to protect against future Russian efforts.

The other big takeaway is that President Donald Trump does not care about any of this.

Comey testified that on Jan. 6 he briefed then President-elect Trump on some of the more “salacious” details of the Christopher Steele dossier. That was the infamous report compiled by a former British intelligence agent about alleged Russian meddling in the election; it also included compromising material regarding Trump supposedly accumulated by the Russians. Trump seems to have had a very strong reaction to only one part of it — the unsubstantiated story about a blackmail tape depicting Trump, um, interacting with Russian prostitutes during past visits to Russia.

The existence of that tape so upset Trump that he called Comey at least one more time to complain about it. Also at the infamous Jan. 27 dinner where Trump allegedly asked the FBI director to swear his personal loyalty, the president suggested he might have Comey investigate the pee-gate story in order to prove it wasn't true.

Think about that: The president’s intelligence chiefs brought him evidence about a foreign power essentially attacking the United States, and his main concern was pushing back on a story that he once paid Russian prostitutes to pee on one another. He said nothing about the election itself or a vow to protect the public from future attacks. All he cared about was one gross story and, for some as-yet-unexplained reason, the future of Michael Flynn, his short-lived national security adviser.

Republicans have been trying to explain away Trump’s actions as being those of a neophyte who, in the words of House Speaker Paul Ryan, is “new at this” —  a man who does not know how Washington works and, it is implied, shouldn’t be held responsible for his actions.

Garbage! We do not grade the president on a curve. The crises of the world do not wait for Donald Trump to get up to speed. The Oval Office, the seat of the most powerful politician in the world, is functionally empty right now because it is occupied by a self-absorbed narcissist. That should be a crisis of concern to everyone, regardless of political party.