“Beatriz at Dinner” brings politics to the table, with no manners and ample humor 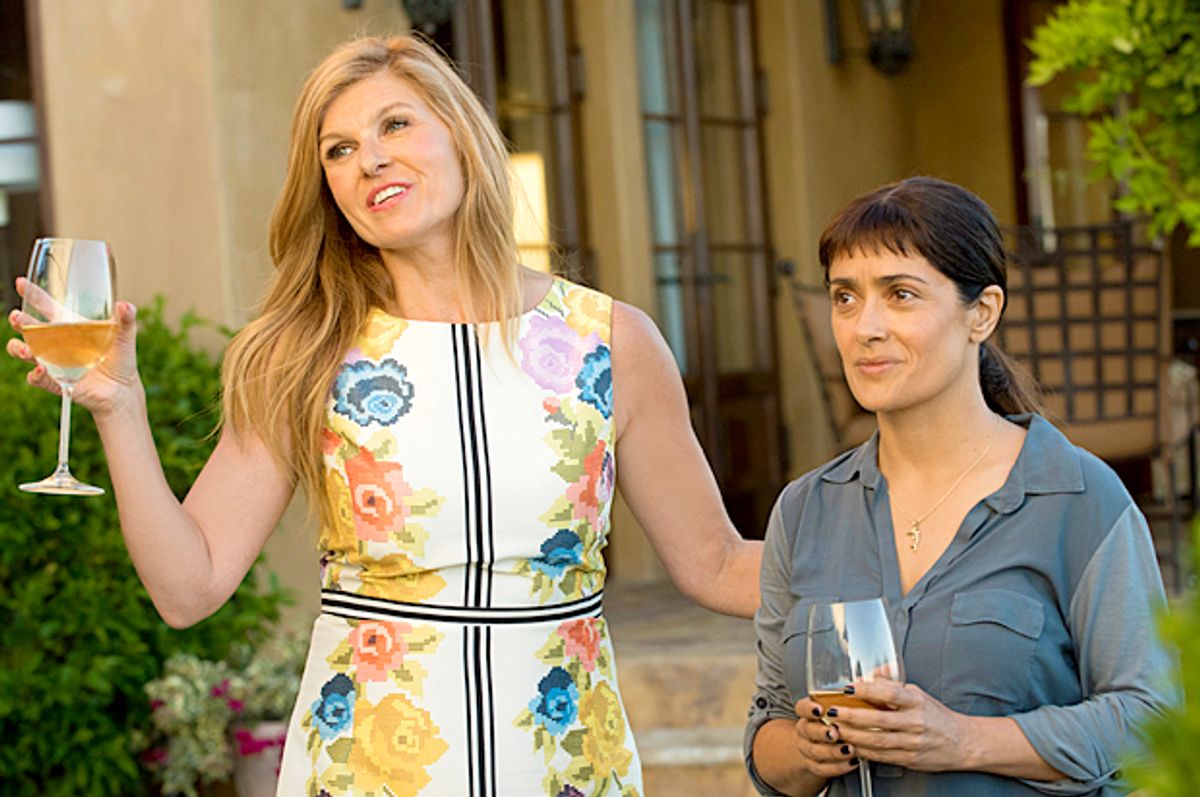 Claude Monet could not paint a more idyllic scene than the one that opens “Beatriz at Dinner.” A flock of birds soars through the morning sky, dipping over a glinting lake that’s still but for a lone rower. The camera takes the rower’s vantage, putting the viewer at command of the small boat. The scene glides too slowly through a setting too picturesque for it to be real. A damp harp patters in the background, adding an air of ominous mystery. At any moment, it seems, a yogic voice might instruct you to breathe in and out and open your eyes. But instead, there is a bleating sound. And then another, louder bleat — and another and another.

Yes, the moment of Zen is interrupted by goats. The goats belong to Beatriz (Salma Hayek), a natural healer and masseuse who works at a holistic cancer center in the western part of Los Angeles. She keeps the goats in her bedroom, the first of many signs that she is nuts for nature and wildlife — and a little nuts in general, too. She also drives an old VW coupe with New Age bumper stickers on its tail, a bobbling Buddha on the dash and a dangling Mary hanging from the rearview mirror. She wears almost-even bangs and has perfect posture. She is, we assume, the person rowing the boat and our liberal conduit for the story to come.

Yet, it’s a bit of stretch to call the ensuing movie a story. It could be more accurately understood as a dramatic scenario: a dinner party where American opposites meet and duel: Beatriz, a small, brown Mexican-American progressive woman of great empathy, on one side of the table: the others all white Americans, with Doug Strutt (John Lithgow), a tall conservative man of great wealth and power, at the head. Thought holidays with your mildly racist uncle were uncomfortable? This dinner party will make you squirm like an eel on the grill. Thanks to social media, in 2017 it’s not uncommon for worlds as disparate as Beatriz’s and Doug’s to clash. (For proof, spend a day reading this website.)

But social media has also created bubbles that prevent such clashes from leaving the virtual realm. Mike White, the film’s writer, and Miguel Arteta, the film’s director, found a simple work-around: the malfunction of old technology. Beatriz winds up at the dinner party because her worn-out VW breaks down at her client Cathy’s (Connie Britton) enormous gated estate.

Cathy is the sort of well-meaning white person who is made the target of Jordan Peele’s outstanding comedy-thriller “Get Out” — a film hard not to compare this one to. When Beatriz asks how Cathy’s daughter is liking college, Cathy raves about the campus diversity. (Her daughter even has a Jewish roommate.) Though she’s prone to the occasional politically correct faux pas, Cathy is unceasingly friendly toward Beatriz. She listens intently when Beatriz tells her about her neighbor who killed one of her goats. And when Beatriz’s car breaks down in her driveway, she invites Beatriz to the dinner despite her husband’s protestations. You imagine Cathy voted for Obama. She’s the same sort of Stepford wife parodied in “Get Out,” but Arteta never cracks the facade to expose machine parts.

The reason for the dinner is a celebration of a new real estate deal — not a coincidence. Cathy and her husband Grant (David Warshofsky) host Doug and his wife (played by Amy Landecker), and another couple played by Jay Duplass and Chloë Sevigny. Beatriz moves through the party as the outsider. She is single. She is not dressed for the occasion. Arteta frames his shots to make the awkwardness palpable. When the guests arrive, everyone goes outside to make small talk. It’s as though there’s a fence between Beatriz and the other guests. She maintains a 10-foot distance, waiting for an introduction. Arteta at one point put Beatriz in the middle of the frame, with the camera shooting over her shoulder, and clustered the group of three men on one side and the group of three women on the other. Beatriz is a spare tire on a six-wheel truck.

When Beatriz is brought into the conversation, though, things only worsen. Doug assumes she’s the help and asks her to refill his drink. He then asks her where she’s from, where she’s really from and whether she’s here legally. The first mistake is understandable because of the way Beatrice hovers at the group’s fringe, but you’re conditioned to not give Doug the benefit of the doubt. How could he? you want to ask. (And then: How could he!?! and That [expletive]!) As an old, wealthy man, whose skin is the color of wood glue, Doug looks the part of a modern villain.

“Beatriz” is not a film interested in challenging stereotypes. Everyone, including Beatriz, is a type — though no one is a cartoon. Arteta used Beatriz and Doug as embodiments of America’s warring factions. The film is interested in what the two character types would do if they were in the room together and what viewers would want them to do.

Doug is not the only character who makes things uncomfortable. When Beatriz realizes that Doug is a killer of animals and a destroyer of the environment and a generally condescending and narcissistic man, she sternly interrogates him. When Doug passes around his phone so that the guests can see a picture of him in Africa with a rhino he shot, Beatriz angrily throws the phone at him. No matter how right she is, it’s unsettling to watch her disrupt a party that she’s not supposed to be at.

Arteta, it seems, is infatuated with discomfort. His last film was the family comedy “Alexander and the Terrible, Horrible, No Good, Very Bad Day,” which, as you might guess, involves a day when things go wrong, worsen, become worse again and then resolve themselves. He’s one of the late Jonathan Demme’s many mentees, and I’d venture a guess that “Rachel Getting Married” is one of his favorite Demme pictures. Beatriz plays a similar role in this film as Anne Hathaway’s character did in that one: She makes the audience blanch.

“Rachel Getting Married” notwithstanding, I detest these sorts of films — the subgenre of comedy that Richard Lewis might refer to as “The __ from Hell.” With all the emotions that the movies are capable of eliciting, why choose anxiety? What possesses a person to make a movie like “The Johnson Family Vacation” or “Vacation”? In “Beatriz at Dinner,” Beatriz tells Doug that destroying isn’t nearly as impressive as healing, and that’s generally how I feel about movies predicated on a series of terrible events. Any director can blow things up and steer cars off cliffs; building is more impressive.

But the discomfort that Arteta elicits serves a purpose and is buoyed by a few very funny moments. Arteta challenges the audience’s notion of appropriate behavior, civility and conviction. You want Beatriz to speak truth to power but not at the dinner table. Yet when else will she have the opportunity to do so? What would you do?

There was an opportunity for “Beatriz” to enter the surreal territory of “Get Out,” and Arteta flirted with going there, but he wisely backed away. The dinner is a surreal enough allegory on its face. Instead, Arteta opted for an ending that is poetic and up to interpretation, qualities that are all too rare.