Comey's testimony so far: Trump is incompetent, self-destructive and in really big trouble

Donald Trump still thinks he's a manipulative genius who can wriggle free of any possible scandal. Not this time 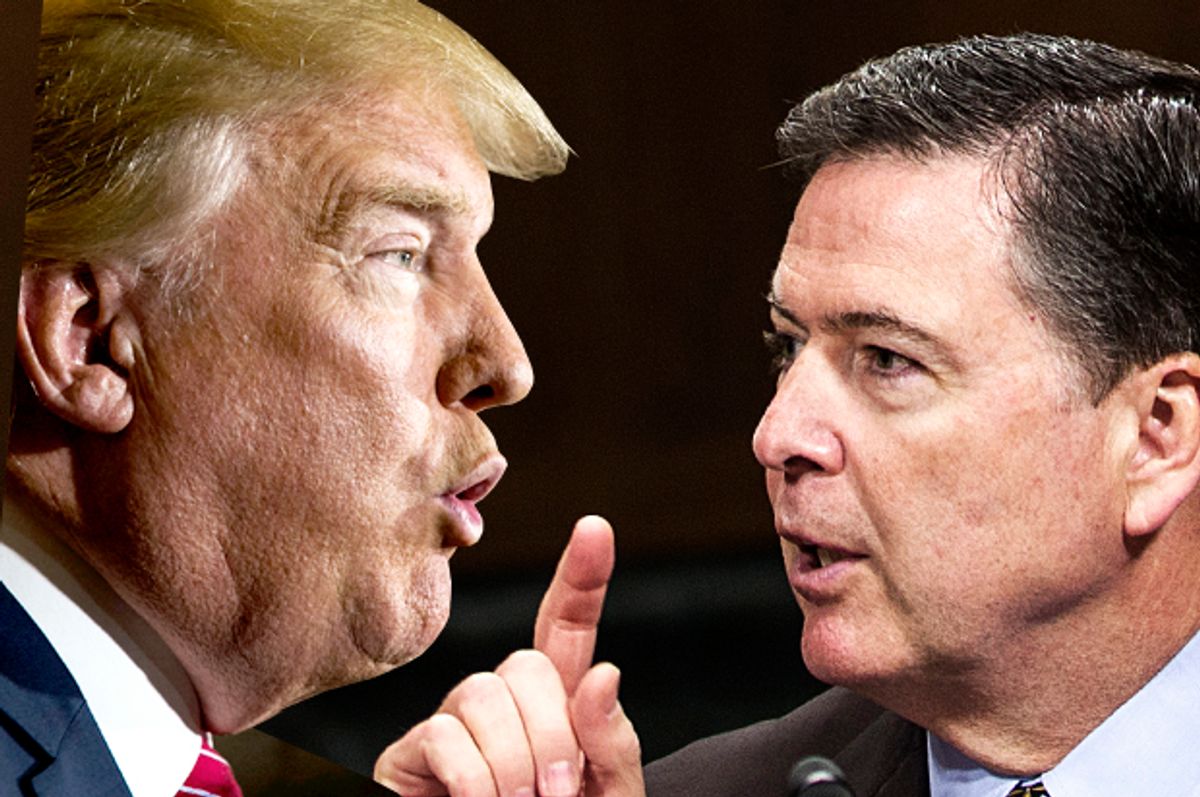 President Donald Trump is his own worst enemy. And with the release of James Comey’s testimony in advance of his appearance on Thursday before the Senate Intelligence Committee, we’ve learned among other things that Trump's talent for self-sabotage is unequaled. Yet Trump is also clinically delusional enough to believe he’s an all-powerful wizard when it comes to problem-solving and Mob-style intimidation, tactics that might’ve worked in the New York and New Jersey real estate and construction businesses but that work less well in the executive branch of the U.S. government.

Need more proof? Check his Twitter feed right now. Trump thinks he can defy best practices and still end up winning. After all, I’m sure he believes his berserker-in-chief tendencies helped him win the election in the first place and therefore they’ll help him navigate his rapidly disintegrating presidency. He’s so, so wrong.

Apparently the president thinks he can comment on — and implicate himself in — counterintelligence and obstruction-of-justice investigations with impunity, while awkwardly trying to strong-arm an FBI director. He thinks he can blab on Twitter about the true intent of his Muslim ban, not realizing (or not caring) that it will make his struggles with the federal courts even more problematic.

Trump thinks he can repeatedly attack Bill Clinton’s tarmac meeting with former Attorney General Loretta Lynch — ranting to his disciples about how the Clintons allegedly tried to muscle Lynch into dropping the email case against Hillary. He thinks he can get away with doing the same thing he repeatedly condemned: trying to muscle law enforcement for personal gain. Unlike what happened with the Lynch meeting, though, Trump apparently tried to do that with Comey on as many as nine occasions, not counting his interactions with other intelligence community officials. (Comey’s official statement includes the line: “I can recall nine one-on-one conversations with President Trump in four months — three in person and six on the phone.” In contrast, Comey wrote that over the course of three years he met with former President Barack Obama only twice, including once to say goodbye during the transition.)

If Trump hadn’t stupidly fired Comey last month, the former FBI director might not be testifying on Thursday about his nine different contacts with the president, the details of which point to obstruction of justice by Trump at the very least. If Comey hadn’t been fired, we might not know about any of those meetings. Weirdly, Trump gave us all a gift. He believed he could kill the Russia probe by ousting Comey and without thinking that he would then be free to testify about those meetings at the White House, further clarifying the extent of the president's obstruction. Meanwhile the Trump-Russia investigation moves forward anyway, now with acting FBI Director Andy McCabe and special counsel Robert Mueller at the helm.

Comey’s statement describes about four or five instances when Trump voluntarily and incriminatingly denied that he and his former national security adviser, Michael Flynn, had done anything wrong. But of course, whenever someone who’s linked to a federal investigation insists that he’s innocent, he tends to appear even more guilty. See also: “I am not a crook.” Again, he’s his own worst enemy. He can’t help himself. In his desperation to make the Russia story go away, Trump worsened his own circumstances by denying he did anything wrong — even though Comey never asked him that.

For the record, I'm inclined to believe the president mentioned “hookers” because he already had been briefed about the Christopher Steele dossier and its infamous revelations about a “pee tape” — and not necessarily because he was accidentally confessing to it. (Though anything’s possible.) Nevertheless, imagine if Obama had to meet privately with the FBI director to deny being in a urine-soaked hotel room with some Russian prostitutes.

Trump is choosing to test the fictitious theory that everyone in Shawshank is innocent — except that he has never offered the subsequent wink and a smile that usually accompanies the transparent denials in the movie. During the 2016 presidential campaign, PolitiFact documented at least 17 instances when Trump claimed he was innocent of various charges, despite the damning existence of video or on-the-record quotes proving otherwise. This is what he does. Like most bullies, Trump fetishizes the “who? me?” dodge. It’s all so obvious. Comey wasn’t quite detailed enough to include it, but it’d be fair to assume that Trump said, “believe me” at least once while struggling to wiggle out of this Kremlin-size quicksand pit. And as we all know, “believe me” in Trump language roughly translates to “what I’m telling you right now is total bullshit.”

Ultimately, President Trump is so self-destructive that, in theory, he could be found totally innocent of colluding with Russia to hijack the election and also completely innocent of money-laundering charges as well as other sinister ties to Russian oligarchs — yet he could still end up being impeached for obstructing justice. As was the case with Watergate, it's not the crime; it's the cover-up. If Trump is forced from office before 2021, it will largely be the consequence of his shocking incompetence, with numerous examples documented in Comey’s statement.

In other words, everything related to the Trump-Russia story could disappear today and Trump would still be on the hook for what he's done to cover it up. And he only has himself to blame — not the “fake news,” not the Democrats, the Obamas or the Clintons. This is all on him.

Fortunately, this isn’t the Serge Kovaleski story or the "Access Hollywood" story or the McCain-got-caught story or the Central Park Five story, or any of the countless horror stories whereby Trump manages to get away with deeds or crimes that would’ve doomed anyone else. Not this time. There’s no way he’s shoehorning his bloated bulk between the raindrops this time. The integrity of our elections and the very existence of our national sovereignty are at stake, and Donald Trump can’t be allowed to slip away.