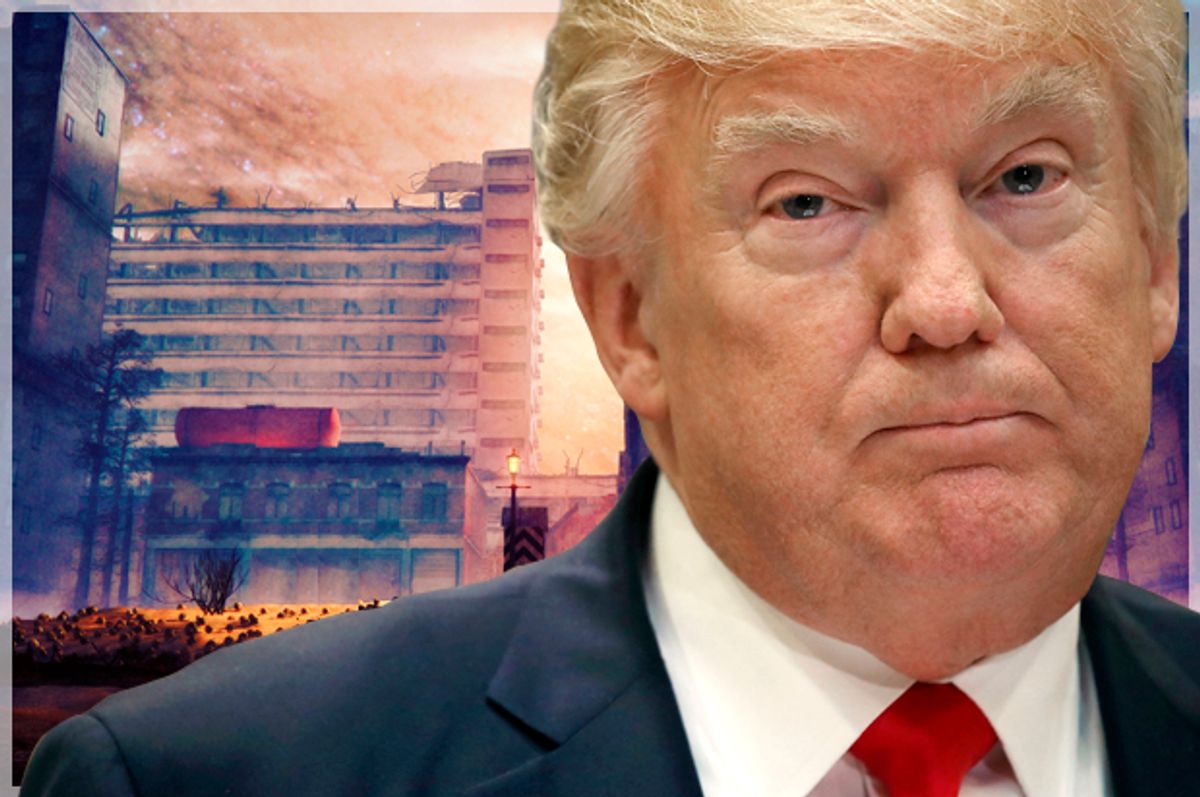 During his recent announcement about the United States’ withdrawal from the Paris climate agreement — which makes our nation the third in the world to not be part of the accord, along with Syria and Nicaragua — President Donald Trump repeatedly insisted that his decision had to do with simple fairness. It was the same kind of sentiment that he frequently conveyed during his presidential campaign: The rest of the world has been disrespecting, mistreating and, worst of all, laughing at us for years.

Like candidate Trump, President Trump seems to hear snickering voices in his head (presumably foreign, non-English voices) and believes they are laughing at him and his country. In Trump’s paranoid mind, every nation on the planet has taken advantage of America in one way or another, and the Paris agreement is just the latest example of this abuse. Ironically, the insecure man who constantly demands “respect” from the rest of the world is actually in the process of driving his country’s reputation into the ground, and the Paris exit is simply the latest embarrassment.

It is often said it is easier to destroy than to create, and over the past months Donald Trump has proven this maxim correct when it comes to governing. Trump’s presidency has been like a violent wrecking ball demolishing everything in sight. And nothing has been more grievously damaged by Trump than the United States’ credibility in the world. America’s global image has collapsed in record time, and with the president’s decision to pull out of the Paris agreement, the most powerful country in the world is well on its way to becoming an international pariah. As the former president of Ireland, Mary Robinson, declared, “The U.S. reneging on its commitment to the Paris Agreement renders it a rogue state on the international stage.”

As America's standing in the world crumbles, many people will no doubt recall how Republican politicians regularly claimed during the previous administration that the country was no longer respected under the leadership of President Barack Obama. As with most Republican positions, this was flat-out delusional, and polling revealed that the country’s global image steadily improved under Obama after having fallen to historic lows during George W. Bush's presidency.

One of the most vocal proponents of this fallacious line of attack was, of course, a conspiracy theorist named Donald Trump, who was convinced that everyone was laughing at his country because it had twice elected a Muslim foreigner as president. Today that unhinged man-child is making the world feel somewhat nostalgic for George W. Bush’s America. According to Pew Research Center, countries around the world have almost no confidence in Trump (compared to their high confidence in Obama), and the freshman president has turned the U.S. into a laughingstock that can no longer be trusted by its allies, as Germany's Chancellor Angela Merkel indicated last week.

Of course, President Trump continues to maintain that he is restoring the country’s status in the world after the U.S. has been mistreated (and laughed at!) for so many years. For example, he claimed in his exit speech that the Paris agreement gives other countries “an economic edge over the United States” and “handicaps the United States economy in order to win praise from the very foreign capitals and global activists that have long sought to gain wealth at our country’s expense.” Not only that, continued Trump, but the nations that are asking America to stay in the agreement (that is, the rest of the world) are “countries that have collectively cost America trillions of dollars through tough trade practices and in many cases lax contributions to our critical military alliance.” Like most of his speeches, this one was full of falsehoods and exaggerations, and the president cited industry-funded studies and misinterpreted other ones to make his harebrained case.

The great irony of Trump’s begrudging speech (and his parochial worldview in general) is that America has long been the world’s leading imperialist force. If any country qualifies as a bully that has treated other nations unfairly over the past half a century, it is the United States. This is evidenced by the many overseas coups that have been orchestrated by the U.S. government, often to serve the interests of American business, with the classic case involving the United Fruit Company and Guatemala. The majority of Americans have not benefited personally from U.S. foreign policy; it has been the multinational corporations and the “power elite,” as C. Wright Mills once called the country’s political and corporate establishments, that have benefited from such interventions.

Consider America’s economy, which Trump claims has been “losing” for decades because other countries have treated us horribly, stealing our jobs and then laughing at us to add insult to injury. This view is so facile and childish it seems unworthy of comment. But, alas, it is espoused by a very powerful man. It goes without saying that American workers have suffered over the past 40 years due to numerous factors, including globalization and corporate trade deals; that doesn’t mean the United States has been “losing” to other countries. In fact, American businesses have done exceedingly well over the past three decades, as have the top 1 percent of earners. Only working- and middle-class Americans have been “losing” in any real sense of the word — and not because foreign governments are so cunning and inconsiderate but because of our capitalist economy.

In addition to arguing that the Paris agreement is designed to hurt America’s economy, Trump bitterly complained that it was unfair to the U.S. as compared with the fate of less-developed countries like China and India. “China will be able to increase these emissions by a staggering number of years,” said the president, claiming that the Chinese will be allowed to build “hundreds of additional coal plants.” The president then declared that the agreement “doesn’t eliminate coal jobs; it just transfers those jobs out of America . . . and ships them to foreign countries.” This, in typical Trumpian fashion, is extremely misleading. China is actually in the process of canceling projects to build coal plants, and its coal consumption has declined since 2013, but such pesky facts are unwelcome in Trump’s reactionary, zero-sum worldview.

Once again, the irony here is that America has contributed more than any other country in the world to climate change and is responsible for nearly a third of the excess carbon that has built up in the atmosphere. “In cumulative terms, we certainly own this problem more than anybody else does,” said climate scholar David G. Victor to The New York Times. Furthermore, America’s per capita carbon emission is more than double that of China (and about eight times that of India). If one were truly interested in “fairness,” as Trump has claimed to be, then the U.S. would be doing much more than it agreed to in the Paris accords.

Withdrawing from the Paris agreement not only erodes America’s credibility and standing in the world, but is an important step toward dooming the planet — or more accurately dooming the human species. It is somewhat fitting that the United States, under the leadership of a vulgar and self-absorbed man who epitomizes the "ugly American," may end up ensuring the collapse of human civilization. During the election campaign, many speculated that the narcissistic Trump was running for president because he had realized in old age that he would quickly be forgotten after he died. Whether that was true, Trump will doubtless be remembered now — as the man who signaled the end of the American epoch and perhaps the human era as well.