“This is D.C.'s version of the Super Bowl”: In the nation’s capitol, James Comey’s televised congressional testimony is treated like a national holiday

D.C. ground to a halt this morning, as locals crowded bars to watch Comey's testimony like it was the "big game" 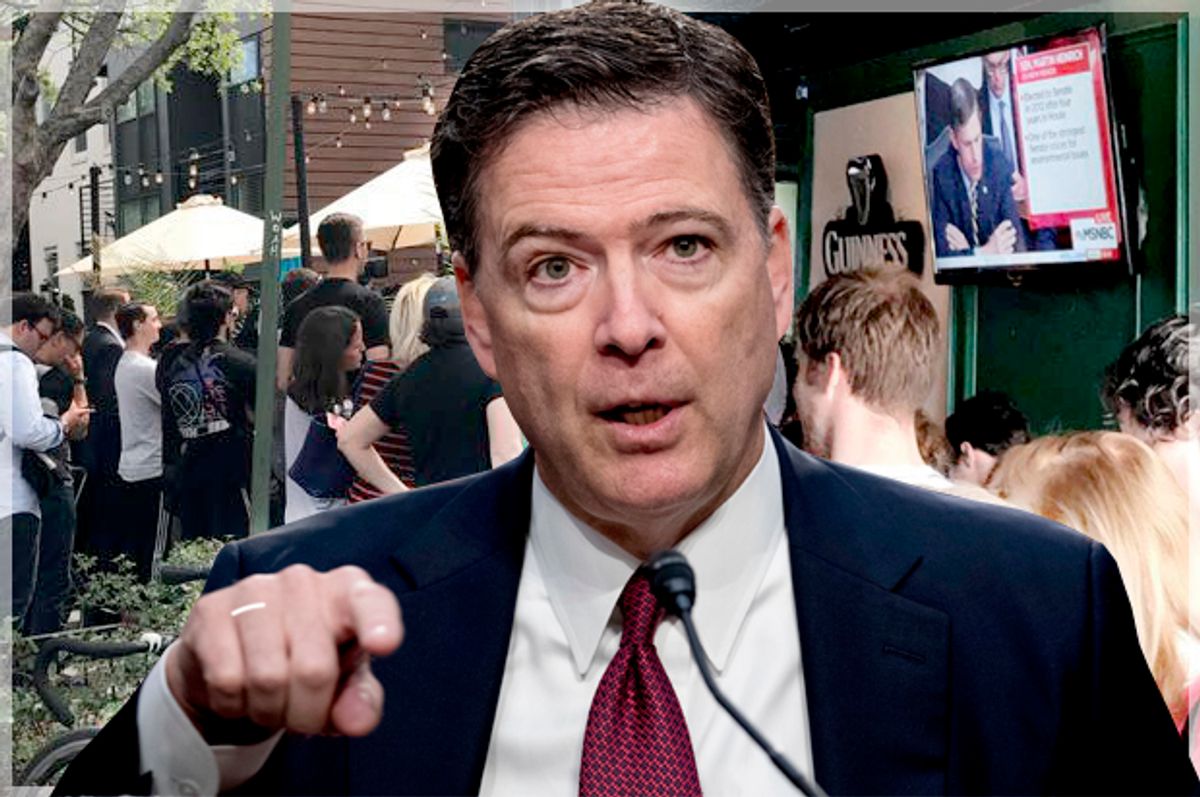 Despite what Donald Trump may say, Washington, D.C. is not a swamp -- literally or figuratively -- but it certainly is a weird place.

Not so in the nation’s capitol.

In Washington, D.C., national news is local news. At least that was the sentiment expressed by several attendees of one of D.C.'s many #ComeyDay watch parties I stopped by on Thursday.

Shaw's Tavern attracted a line of waiting customers nearly an hour before Comey was set to testify at 10 am. The staff designed a special "FBI breakfast" complete with Covfefe coffee — a drink with whipped cream, cinnamon, and vodka.

Duffy's getting in on the Comey watch party action pic.twitter.com/HvDT35YMHR

In a city where the phrase “Fuck Trump” is the most oft-sighted graffiti, residents are always eager to talk politics. But Thursday’s congressional hearing illustrated the overwhelmingly Democratic district's thirst for public commiseration, as what looks the be an ever growing scandal engulfs the Trump administration.

"This should have been a national holiday," said one Uber driver who parked to watch the testimony after dropping off customers at the tavern. More than 600 people RSVP'd on Facebook for the watch party at Shaw's: At Duffy’s, a line of five new mothers -- who were strangers before the day’s event -- gathered together, with their babies strapped to their chests, watching intently as the fired FBI director testified under oath that he feared the president was a liar. Under the morning sun, about 30 people gathered around one television at the Irish pub to take in the Senate grilling with Bloody Mary’s, White Russians, and pitchers of beer. Inside, people crammed into every corner of the bar to catch a glimpse of the TVs set to MSNBC. People wearing “Madam President” and “Nasty Woman” t-shirts came prepared with their own political messages.

The gathered crowds at every bar cheered as Comey offered witty jabs, and jeered every time the fired FBI director was pushed by hostile Republican senators. Each time Comey declared that the matter of Russian interference in the 2016 election is “not a Democrat or Republican thing. It is an American thing,” the crowds broke out into rowdy applause.

“Aw,” the crowd cooed when Comey said he was forced to cancel a date night with his wife in order to deal with Trump’s demands.

“Comey is a funny guy,” one guy at Duffy’s shouted to cheers.

“Because so many people in D.C. share the same political views, it is nice to be in a comfortable setting where you can perhaps engage with other people ... who have the same opinions as you,” Shawanda Green, who watched the Comey hearing at the less-crowded Bin 1301 on D.C.’s famed U Street, said. Fellow D.C. resident Chris added, “political views aside, it is tough times in America, so [I] want to be around other people.”

Most seemed to be searching for a sense of community.

“This is D.C.’s version of the Super Bowl,” a naval officer at Bin 1301 told me. A lifelong D.C. resident, she explained that “D.C. only has so many things to get really, really excited about.”

She said she wanted to watch Comey’s testimony in public because: “I thought it would be fun.”

“Having a deposed leader, the FBI director, who was fired for doing his job and then having him do public testimony for three hours followed by a private session with the Senate,” is exciting, she explained. “Honestly I would love to see the president impeached for obstruction of justice.”

While Comey's testimony grew into a public spectacle in the nation’s capitol on Thursday, it is apparent that the saga surrounding his firing and the Trump administration has gripped much of the rest of the nation.

Deborah and Don, visiting D.C. from Tucson, Arizona, told me that they expected similar interest in Comey’s testimony back at home. “This is probably happening all across the country -- even in Tucson,” Deborah said.

But, she added, “This is my first time in D.C., and driving in last night it hit home that in D.C., your local news is national news. It is pretty profound.”