Brightness fades: The new season of "Orange Is the New Black" turns grim 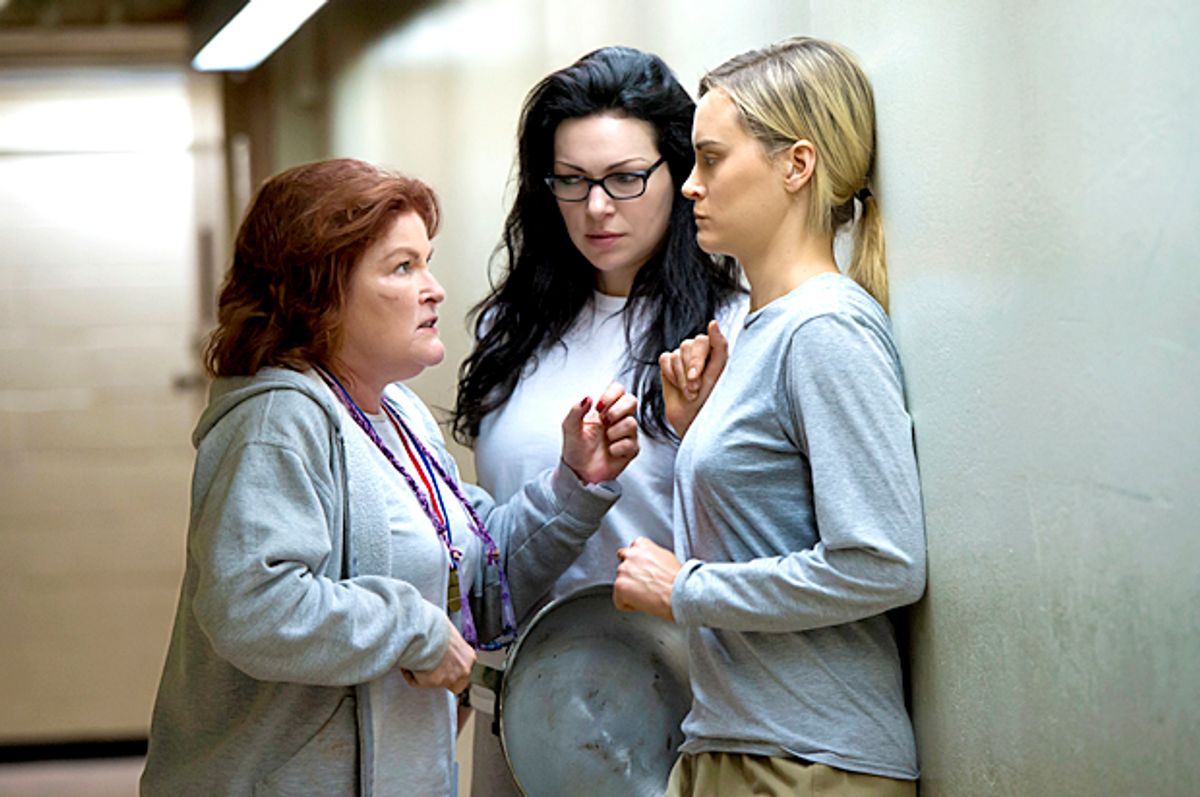 There is no conceivable way that a person could walk away from the fourth-season finale of “Orange Is the New Black” with the hope that the situation could possibly end well for the inmates of Litchfield Penitentiary.

If you don’t know or remember why that is the case, stop reading now, go back and watch those episodes. You may appreciate the reminder that the fourth season began in a sunnier place, directly following a mass breakout for a swim in a nearby lake. That sunnier feeling shortly darkened as Litchfield fell under private administration by a for-profit corporation known as MCC.

With its emphasis on efficiency and returns over humanity, MCC hires goons to beef up the guard ranks at Litchfield led by an abusive fascist who instituted stop and frisk policies, a practice they only apply to the black and brown women at the prison. Inmates — women ​that many viewers strongly relate to — sustain vicious physical abuse. One is accidentally killed. When the administration fails to grant the dignity of mentioning her name, the pressure cooker that is Litchfield’s social ecosystem explodes into a full-blown riot.

Season 5 was released on Friday on Netflix and picks up exactly where the fourth-season finale left off: The place has plummeted into chaos, with inmates running wild and turning the tables on the guards. Some prisoners view the riot as an opportunity to tell the world about the inhumane treatment they have been subjected to. Others take advantage of the anarchy to blow off steam, either by repaying torture in kind or engaging in vandalism.

Most of the inmates quickly forget the main reason the uprising began in the first place, breaking into vending machines or taking over the commissary. With the place in lockdown, nobody has true freedom — but at least the oppressed have the power or as much as convicts can claim. Their failure to find consensus on how to use it informs how this season unfolds, but it also speaks to how messy this season is in relationship to previous ones.

The events of season 5 take place over a matter of days — an incredibly short time frame compared to prior seasons, which journey through the lives of select characters over the course of several weeks. But all 13 episodes of the fifth season explore the riot from the bottom up and start to finish, necessitating the compressed span of time. This truncated stretch and the rampant strife do not favor the series’ storytelling style; there’s simply not enough time for subplots to meaningfully develop enough to add layers to the actions.

Recall that the ensemble of “Orange Is the New Black” swelled to 19 people last season, or at least 19 that Netflix saw fit to list. Minus the dearly departed Poussey (Samira Wiley), nearly all those actors are still there in addition to others on the fringes. The bedlam drowns most chances for finding out more about some of the newer folks who receive face time this season, the writers also expand the backstories of people we already knew in addition to taking a few memory trips through the lives of the lesser-known regulars, such as the early, enjoyable insight into Dale Soules’ Frieda.

The revelatory glimpse into Frieda’s past epitomizes creator Jenji Kohan’s practice of broadening of the show’s view into the lives of marginalized women. And as “Orange Is the New Black” has progressed, these women have grown more central to the plot than its original stars, Piper Chapman (Taylor Schilling) and Alex Vause (Laura Prepon), two upper-middle-class white girls thrust into the penitentiary puddle with scores of African-American, Asian and Latina women with whom they would rarely if ever interact in the outside world.

Piper and Alex’s storylines barely register in season 5; besides their economic status doesn’t even compare with that of celebrity inmate Judy King (Blair Brown), the “Orange” version of Martha Stewart. With the riot erupting in the dorms and halls, Piper and Alex have no pull whatsoever (Judy, on the other hand, is valuable currency). This gives other performances a chance to take center stage, although Danielle Brooks quickly becomes this season’s stand-out as Taystee, whose reasonable demeanor hardens with purpose as the Litchfield riot draws more attention from the outside.

Despite the current season’s unwieldy execution “Orange Is the New Black” remains one of summer's finer diversions due the variety of distinct and outsized personalities in its roster of characters, enlivened by distinctly emotive portrayals.

Kohan and her writers also treat Litchfield as a microcosm of what’s happening in the world at large, although last season’s parallels to the #BlackLivesMatter movement are plainer. Even so, one can easily see the metaphors lurking within the murk. The problems start when a guard brings a gun into the prison, an action informed by his refusal to see the women as fully human. The gun is power, and it passes through several sets of hands — ending up at one point in the possession of a character who is unhinged and immediately misuses her newfound dominion to serve her ego.

The shallowly written white nationalists in the prison are little more than trolls but they do the most damage by manipulating the media and obfuscating the riot’s noble message, one that the public is ignoring anyway. And when the high-minded among the population ask the women to put their demands to a vote, justice for their sister takes a back seat to creature comforts. And this season also slyly examines the worth of movements and labels, suggesting that while resistance can make us feel good, scores of people will continue to suffer before we know whether it’s working.

Netflix made a deal with Kohan to pick up “Orange Is the New Black” for three seasons last year, taking it through to season 7. But these new episodes mark a point of no return for Litchfield, underscored by the final scenes of the season. There's no need to be specific about it and spoil viewers, beyond saying that riots and sieges have consequences, and this season’s necessitate major shifts in the story and character dynamics.

Season 5, like the one before it, ends with a cliffhanger and an image that is as heartening as it is scary. For those who take its larger metaphor to heart, it’s also apt. When we find ourselves in a mess, we eventually have no choice but to throw in together and clean things up, regardless of who started it. Seeking some direction, the inmates in the scene turn to a person who has spent her life preparing for all eventualities. As the air shatters all around them, they ask her what to do. Her answer is perfect, both for the women on the screen and for viewers feeling similarly besieged in real life.

We keep our dignity.