GOP chairman of the Senate Judiciary Committee forced to explain government to Trump: That is "not how it works" 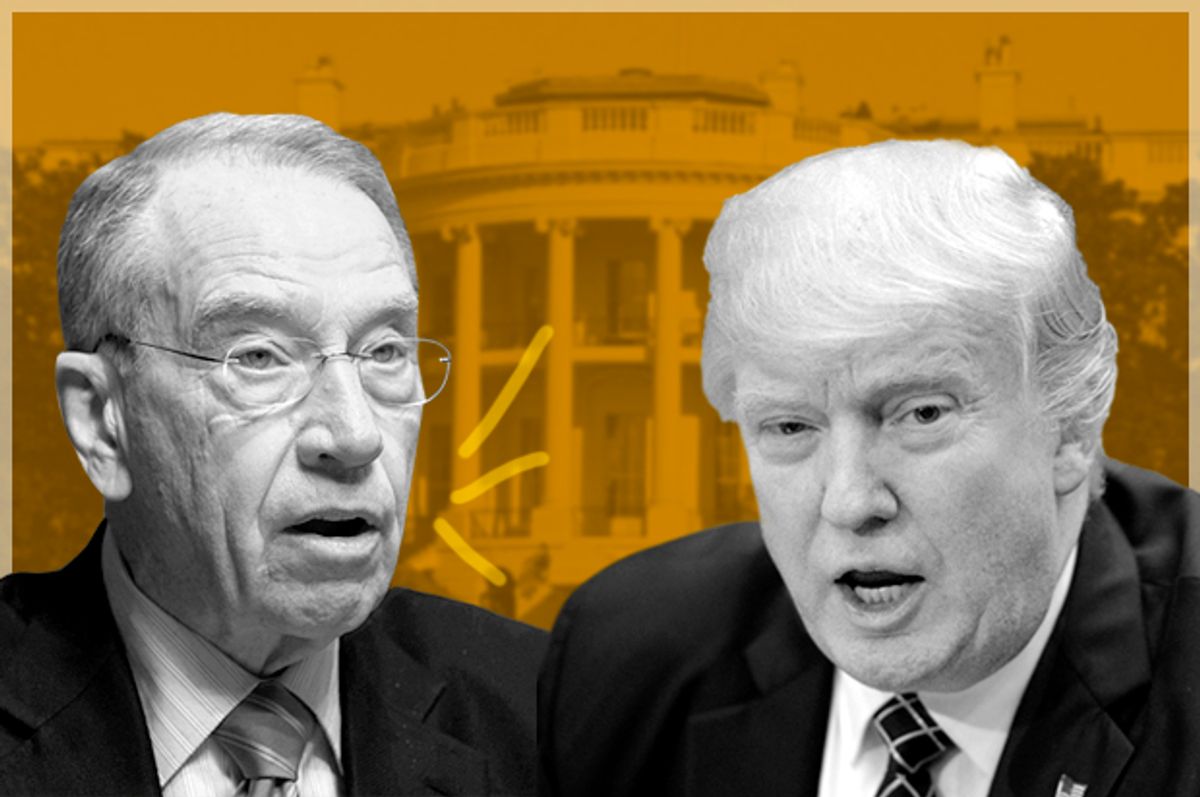 In a fight between Donald Trump and Senate Democrats' oversight authority, Republican Senate Judiciary Committee Chairman Chuck Grassley just took a powerful stand on the side of Democrats.

The veteran Iowa Republican is not happy with Trump's gag order on federal agencies, calling a new Department of Justice policy of shutting down oversight requests from Democrats “nonsense."

Last month, the Office of Legal Counsel issued a directive that said that "individual members of Congress, including ranking minority members, do not have the authority to conduct oversight in the absence of a specific delegation by a full house, committee or subcommittee." Acting Assistant Attorney General Curtis Gannon argued that in the May 1 opinion that "the executive branch's longstanding policy has been to engage in the established process for accommodating congressional requests for information only when those requests come from a committee, subcommittee or chairman authorized to conduct oversight."

But the White House’s determination that Trump can simply disregard Democratic lawmakers’ oversight inquiries is a bridge too far — even for Republicans.

“This is nonsense,” Grassley wrote to Trump this week.

The OLC directive "relegates requests from non-Chairmen to the position of 'non-oversight' inquiries—whatever that means," Grassley noted. "Reading the OLC opinion, it would seem oversight is only 'oversight' if it’s mandatory."

In the seven-page letter released on Friday, Grassley explained to Trump that that's "not how it works":

To so fundamentally misunderstand and misstate such a simple fact exposes its shocking lack of professionalism and objectivity. Indeed, OLC appears to have utterly failed to live up to its own standards

"You are being ill-served and ill-advised," Grassley warned Trump. "Shutting down oversight requests doesn’t drain the swamp, Mr. President. It floods the swamp.”

Of course, Grassley chairs the Senate Judiciary Committee and thus was unaffected by OLC’s opinion. The Republican simply defended his Democratic colleagues’ right to get information from the administration.

The top Democrat on the House Committee on Oversight and Government Reform, Maryland’s Elijah Cummings, recently asked the director of national intelligence, Dan Coats, for documents related to his conversations with Trump about the Russia investigation. But on Thursday, he released dozens of letters that he said have gone unanswered by the Trump administration.

"Every member of Congress is a constitutional officer,” Grassley reminded Trump in his own strongly worded letter. “All members need accurate information from the executive branch" to make decisions for their constituents.

Defending all elected members' role in conducting oversight of the executive branch, Grassley wrote that "members of Congress simply do not treat executive branch officials with such contempt and they do not deserve such treatment in return.”

Grassley ended the letter by urging Trump to comply with all oversight requests from members of Congress — including Democrats.

“Unlike virtually all executive branch officials, Members are elected to constitutional positions. Instead, the executive branch should work to cooperate in good faith with all congressional requests to the fullest extent possible."