Donald Trump's "I am not a crook" moment: Now it's the cover-up, not the crime

Yes, it's like Watergate: Trump's actions have made a murky scandal much worse. But it might not end the same way 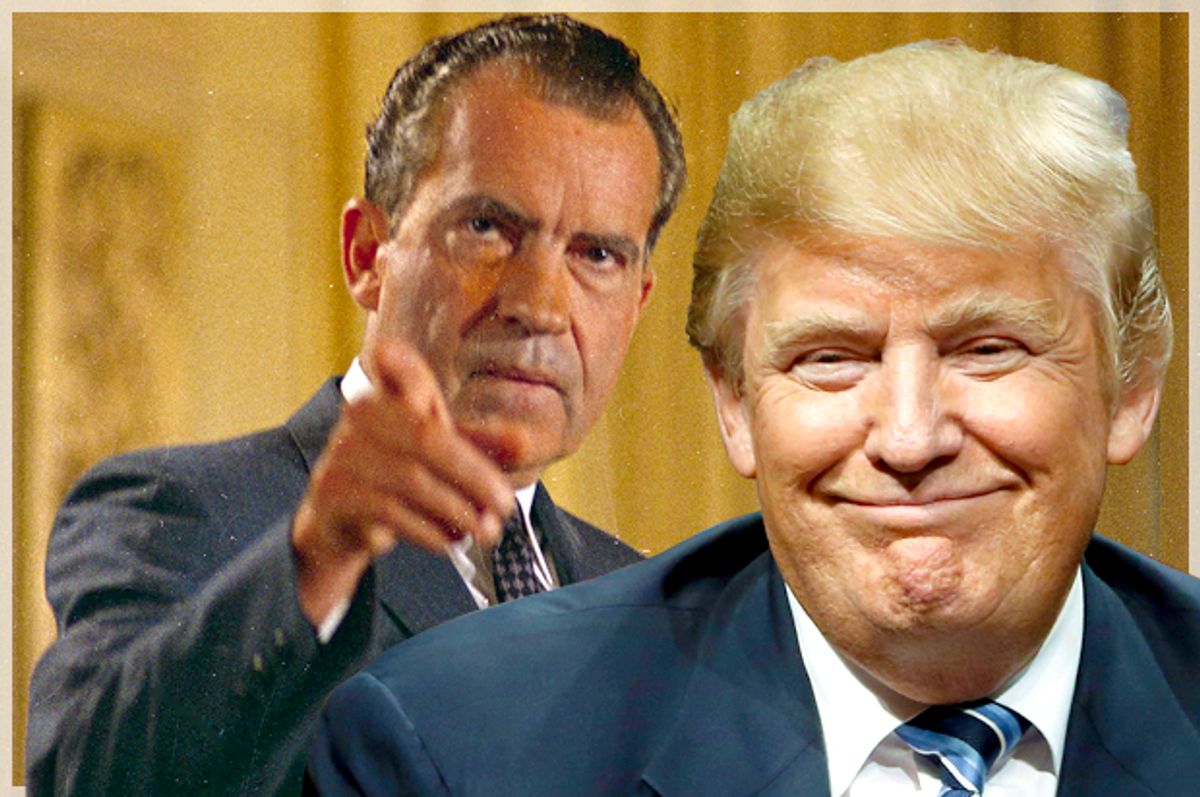 In the aftermath of President Richard Nixon’s Watergate scandal, the phrase “It’s not the crime; it’s the cover-up” entered the cultural mainstream, moving from being a political catchphrase to the sort of thing used in hackneyed televised cop shows.

But in a year when the current president is engulfed in a scandal featuring a person who is named Reality Winner, the shopworn phrase from the 1970s has returned with a vengeance.

The Trump-Russia story has long been compared to the Watergate scandal and reached a Nixonesque high point on Thursday as former FBI Director James Comey testified before the Senate Intelligence Committee. No law enforcement agency has thus far found any evidence indicating that President Donald Trump colluded with Russian officials in order to win the 2016 presidential election. At the same time, Trump appears to have taken several actions related to the investigation that were, at best, incredibly naïve and inappropriate. At worst, they may well represent obstruction of justice.

According to Comey, Trump considered the FBI’s counterintelligence investigation to be a “cloud” over his administration. But instead of forcing White House and former campaign officials to expedite their cooperation with the law enforcement agency, Trump instead chose to repeatedly apply pressure on Comey to speed things up on his end.

The president was particularly insistent about trying to help Michael Flynn, the onetime head of the Defense Intelligence Agency who was forced out for odd behavior during the administration of former President Barack Obama but later hired by Trump as national security adviser.

Comey testifed about a Feb. 14 meeting (documented by him in a memorandum written immediately afterward) between Trump and himself in the Oval Office that followed a routine counterterrorism briefing attended by Attorney General Jeff Sessions, senior adviser Jared Kushner and several other military and intelligence officials.

After collectively dismissing the others — and Kushner and Sessions explicitly as they lingered, perhaps knowing what was about to transpire — the president told Comey that he wanted to talk about Flynn. The latter had resigned from his position only the day before, after word got out that he had made false statements to Vice President Mike Pence about pre-inauguration conversations with Russian government officials.

"He is a good guy and has been through a lot,” Trump began during his private meeting with Comey, according to his testimony. He then asserted that Flynn had done nothing wrong in speaking to the Russians, only that he had failed to tell the truth about his conversations.

After alluding to other (unspecified) concerns about Flynn, the president then asked Comey if it was possible for him to end the separate criminal inquiry that the FBI had opened into Flynn’s conduct.

Although Trump's request was not explicitly phrased as a demand, Comey suggested on Thursday that he couldn’t help but interpret it as one.

“It rings in my ear as, well, 'Will no one rid me of this meddlesome priest,'” Comey said, referencing an apocryphal story about England’s King Henry II and his indirect order to murder Thomas Becket, a bishop who had opposed his rule.

Comey declined to back off on Flynn or any other aspect of the Russia investigation and was subsequently fired by the president on May 9. Immediately thereafter, the White House concocted an elaborate and obviously false series of explanations about why the FBI head had been sacked, citing a memorandum written by Deputy Attorney General Rod Rosenstein that had little or nothing to do with Trump’s decision.

According to Comey, the president’s Feb. 14 request was the most explicit of multiple attempts made by Trump to manage the Russia inquiry.

In his Thursday hearing testimony, Comey also said from the very beginning of Trump’s tenure, he felt it necessary to document his interactions with the president, unlike his sentiments while dealing with Obama and former President George W. Bush.

“I knew there might come a day when I would need a record of what had happened, not just to defend myself, but to defend the FBI and our integrity as an institution and the independence of our investigative function,” Comey said after Sen. Mark Warner, D-Va., asked him why the former FBI director decided to keep detailed records of his conversations with Trump.

“I can definitively say the president is not a liar,” Sanders said. “It’s frankly insulting that the question would be asked.”

She was smart to deliver those words off camera, given how similar they are to Nixon’s famous phrase “People have got to know whether or not their president is a crook. Well, I'm not a crook.”

That superficial similarity is far from the only parallel that Thursday’s affair has in common with the Watergate scandal, however. Both events appear to resulted from misplaced loyalty of a president for subordinates allegedly involved with criminal acts on his behalf.

As John Dean, the former law enforcement official who became a witness against Nixon (another parallel perhaps?), wrote in his book “The Nixon Defense: What He Knew and When He Knew It,” there is no evidence that the president told his campaign skunkworks staffers to burglarize the Democratic National Committee's office. They went ahead and did it anyway, undoubtedly with assurances from presidential adviser John Ehrlichman.

While the Watergate burglary was part of a much larger cloak-and-dagger operation of the Nixon re-election campaign — including an order to bomb the Brookings Institution (which was never carried out or reported on until decades later) — it’s quite possible Nixon could have quarantined the scandal away from the White House had he simply cut off the thieves and their immediate paymaster, former intelligence operative Howard Hunt.

Instead, the famously peevish president decided to come to the aid of his underlings. In the process, he took down his entire administration as the lies and cover-up tactics expanded into orders to use the CIA to throw the FBI off its investigation into the break-in. What began as a “third-rate burglary” ended up being a constitutional crisis.

Similarly, if Donald Trump had been willing to cut off Flynn and any others who had been accused of trying to grift off American and Russian taxpayers, he might never have arrived at the point of asking Comey to rescue Flynn, and thereby face potential charges of obstruction. If the original counterintelligence investigation had been about trying to figure out what the Russians had done in their efforts to influence the American president election, the resulting scandal is now largely about the president's response. Trump, like Nixon, couldn’t resist meddling in it — and can’t keep his mouth shut.

The result may be that an investigation of an incident that Trump once dismissed as the work of a random, unskilled hacker (“somebody sitting on their bed that weighs 400 pounds”) could end up destroying Trump's presidency, especially after he volunteered in a press interview that he had fired Comey explicitly for his failure to bring the Russia probe to an end.

Of course, one major difference from the Watergate scandal is that Trump's party controls both houses of Congress, at least for now. As long as the president stays close to the congressional Republicans' conservative policy agenda and remains to be useful to them, the Russian influence scandal and resulting cover-up may not end with Trump's removal from office.

There's another way that the current imbroglio differs from the Watergate scandal as well. Right after Nixon made his famous “I am not a crook” proclamation, he became the first president to release his private income tax returns, beginning a tradition that Donald Trump has famously refused to follow.