10 years ago: "The Sopranos" goes dark

From the Salon Archives: Recap of the powerful, maddening ending to HBO's groundbreaking mobster show 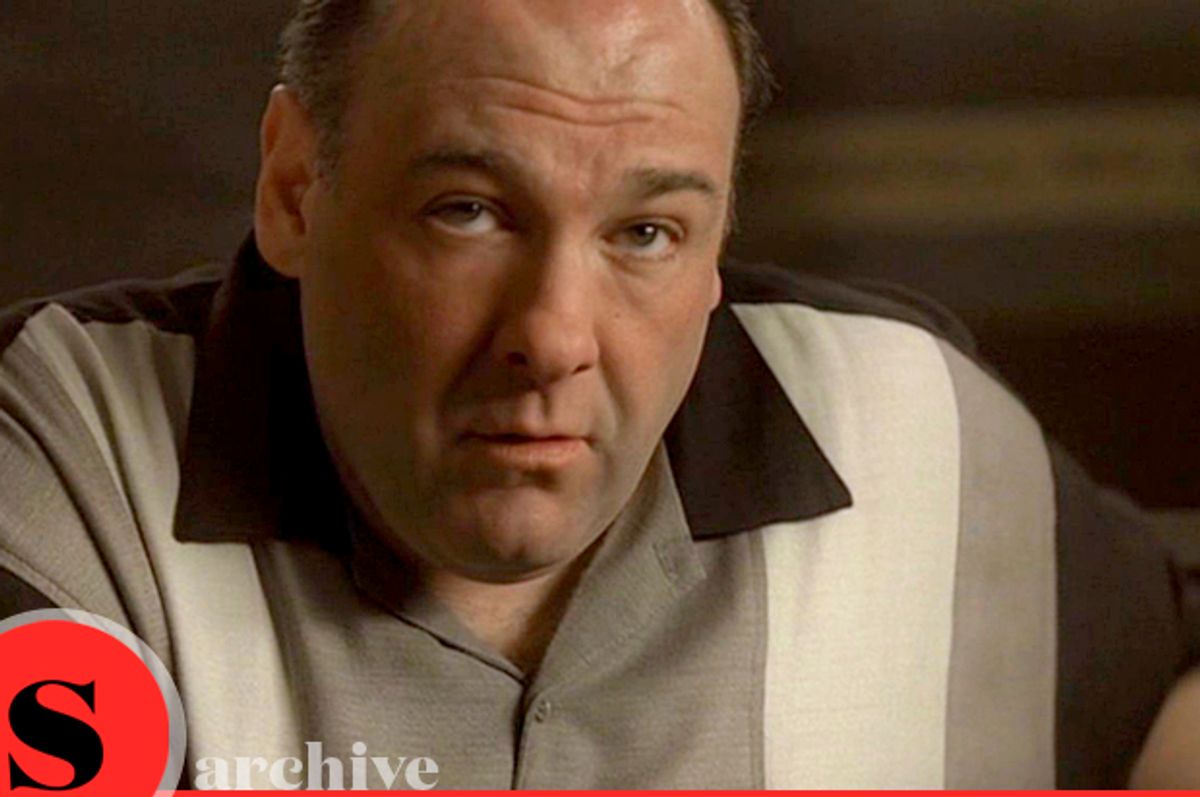 James Gandolfini as Tony Soprano in "The Sopranos" (HBO)
--

This Salon story was originally published on June 11, 2007.

For his final trick, "Sopranos" writer/creator David Chase made Tony Soprano disappear without fanfare. In what may go down as the most heart-stopping final scene of a drama series in the history of television, Tony walked into a restaurant, sat down at a booth, ate a few onion rings, and ... that was it. Roll credits.

As the screen went black in the middle of a line from the song "Don't Stop Believin'" by Journey, it was hard not to wonder, Is Chase brilliant for so thoroughly subverting our expectations, or ... is he just an asshole?

Reading the predictions leading up to this final episode, it was easy enough to see why Chase might want to mess with our heads. There were the expected ones: Tony would get killed, go to prison, go into witness protection and rat out the New York family. But then there were the theories that tied together every loose end from every episode into one big tangled mess: The Russian mobster from Pine Barrens was going to return, finally, seeking revenge! A.J. was going to kill his own father! Adriana secretly survived and was going to come out of hiding! Dr. Melfi's shrink and colleague, Elliott Kupferberg, would be revealed as the secret boss of Phil Leotardo! Everyone would die in a massive terrorist explosion!

If we got sick of hearing about other people's speculations on how "The Sopranos" would end in just one week, imagine how Chase has been feeling for the past three or four years. Creating a cultural phenomenon this huge is an experience that can change a sensitive soul, after all, and make him act out against his fans. Look at J.D. Salinger. His books were obscenely popular, but no one understood! They were all jackasses, as far as he was concerned. Was Sunday night's finale Chase's way of telling us all to fuck right off?

If so, it was fitting that the big F.U. should come from the mouth of the show's least respectable character, self-pitying, idiot-savant A.J., who explodes in an angry outburst after Bobby's funeral. Disgusted with the idle Oscar-related small talk at his table, he rages, "You people are fucked. You're living in a fucking dream!" Then he snipes that Americans distract themselves from their country's atrocious acts by "watching these jack-off fantasies on TV."

Later, after A.J. has been coaxed out of following his convictions into the military and to Afghanistan, and led into temptation by his parents with a new BMW and the promise of a cushy job working on -- what else? -- some crappy film cobbled together by a bunch of halfwits, he sits on the couch with his high school girlfriend, snickering at viral videos of rappin' Karl Rove and Bush dancing. There we are, America! Sending each other YouTube videos, chuckling at "The Daily Show," instead of rioting in the streets. Crisis of conscience narrowly averted!

Even so, Tony may not have eaten lead, but he didn't exactly get off easy in his final days on-screen. Chase turned up the flame on his boiling pot until we were all sweating, showing us how nasty Tony could be, making us hate ourselves for ever caring about him, and demonstrating how miserable things could get for Tony if his luck didn't hold. In these last few hours, Chase crafted each episode into a dense, claustrophobic, melancholy work of art, each one more solemn and heartbreaking than the last.

But on Sunday night, he returned to the show's original twisted tragicomic roots: A.J. watches in awe and disbelief as his car goes up in flames because he parked too close to a patch of dry leaves; Phil Leotardo is shot, his head then crushed under the wheel of his own car (Grandbabies waving bye-bye from the back seat! Bystanders vomiting!), in a scene so rich and silly it felt like "The Sopranos" parodying itself; Tony and Carmela speak to A.J.'s shrink and Tony slips easily into a discussion of how incredibly cruel his mother was to him. We can see the next few decades flash before Carmela's eyes: This is Tony's never-ending sob story, and it doesn't matter who's listening.

As we've been reminded all season, Tony is all about Tony, no matter whom he pretends to be protecting. He's not necessarily a complete sociopath. He's just your average self-interested, smug American. What was Steve Perry singing in that final scene?

Working hard to get my fill,
Everybody wants a thrill
Payin' anything to roll the dice,
Just one more time
Some will win, some will lose
Some were born to sing the blues
Oh, the movie never ends
It goes on and on and on and on

(Chase really does have the last laugh, here, making us pick apart lyrics to a Journey song, for Christsakes.)

The comedy didn't begin and end with Tony, though. One of the best lines of the night came from darling daughter Meadow, explaining to Tony why she decided to give up on med school in order to pursue a career in law instead:

Meadow: You know what really turned me? Seeing the way Italians are treated. It's like Mom says. And if we can have our rights trampled like that, imagine what it's like for recent arrivals.

Meadow: If I hadn't seen you dragged away all those times by the FBI, then I'd probably be a boring suburban doctor.

Of course we know that Tony wishes Meadow were a boring suburban doctor, but the look of suppressed disbelief on his face goes beyond that. It's almost like he wants to say, "Med, let's get real, here. I am a criminal."

He says nothing, but it's official: Meadow's denial is as complete as her mother's -- and her fate matches her mother's fate as well.

And speaking of matching fates, Detective Harris is made out to look like Tony's long lost twin, working long hours, yelling at his wife, then sleeping with a co-worker, presumably the agent in Brooklyn who told him where Leotardo was hiding. When Harris hears that Leotardo has been shot, he cheers. The home team pulls off another win! There is no moral high ground here -- not among FBI agents, or among therapists. Everyone is out for themselves.

Of course, some of these are scenes we've seen before: Tony sits next to an unconscious Sil in the hospital, silently, just as he's done with so many of his guys. Paulie is reluctant to take a top job because he's superstitious, since the others who've filled that post have died before him. But Tony wants him to do it, so he agrees, a grim look darkening his face after he's surrendered to Tony's wishes. It's not just Tony who's trapped in this life for good.

And then, we see where it all leads: Tony finally takes a trip to see Uncle Junior, who doesn't even recognize him. When Tony reminds June that he once ran the North Jersey mob with Tony's father, the old man replies apathetically, "That's nice." As Tony strides away, like he can't get out fast enough, we recognize that look on his face: It's all a big nothing. June may as well have told him, "This thing of ours, it doesn't amount to shit in the end, so you'd better enjoy yourself while you can."

Afterward, as Carmela and A.J. settle into the booth with him, we can see that Tony once again feels his luck is changing. In response to A.J.'s premature complaints about his new job, Tony tries to joke around to keep from busting his jaw.

Tony: It's an entry-level job. Now buck up!

A.J.: Focus on the good times.

A.J.: Isn't that what you said one time? Try to remember the times that were good?

Even as Tony agrees, once again, that each day is a gift, this last scene may have been a gag gift sent special delivery to the loyal "Sopranos" audience. Chase played us like a grand piano, dragging out every suspenseful trick and visual reference in the book. Of course we thought Tony and his family were going to die in a hail of gunfire. There was the surly-looking guy, glancing at Tony, slipping into the bathroom, sure to emerge seconds later with a gun, "Godfather"-style. There was the blasting music, the close-up on Meadow's clutch as she tried in vain to parallel park her stupid car, over and over again, and then almost got run over crossing the street. This was it! Something big was going to happen!

But does Chase really want to go out like that, subverting a few decades of mob clichés? When "The Sopranos" has always transcended its genre with smart, lovely moments that went to the heart of suburban American angst, was it really fair to end in a flurry of inside jokes and a great big head fake?

Instead of taking Tony down out of karmic retribution, Chase got his karmic revenge on us for caring too much about this "jack-off fantasy on TV" in the first place.

And yet ... is it possible that we're witnessing Tony's last moment alive? What did Bobby say to him on the boat, in the first episode of this last run? "You probably don't even hear it when it happens, right?" Maybe the abrupt ending is Tony getting shot, without even realizing it?

That's probably wishful thinking, like hoping that there really is a Santa Claus simply because it would make the holidays much more interesting. We've never seen things from Tony's perspective, so why would we start now? And wouldn't we at least know who killed him?

No. Tony's story simply ended abruptly. Since we didn't have a chance to say it before, we'll say it now: Goodbye, Tony. Looks like you won't go to prison (not yet, anyway), and you won't rat, and you won't finally get your comeuppance, dying in a bloody heap. You'll be immortalized eating onion rings, chuckling, focusing on the good times.

Just like the rest of us. Going to hell in a red leather booth, with Journey playing in the background.