Demagoguery vs. democracy: How "us vs. them" can lead to state-led violence 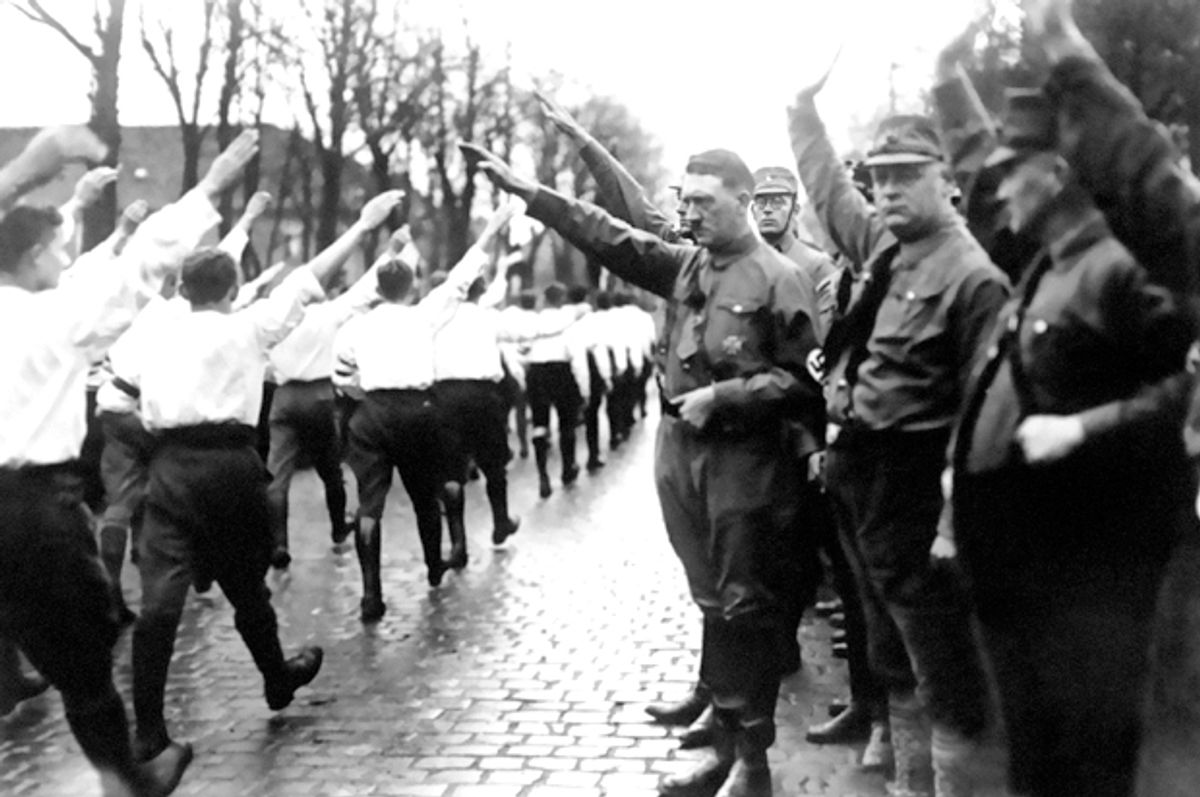 An adapted excerpt from "Demagoguery and Democracy" by Patricia Roberts-Miller. Reprinted with permission of The Experiment. Available wherever books are sold.

Demagoguery is about identity. It says that complicated policy issues can be reduced to a binary of us (good) versus them (bad). It says that good people recognize there is a bad situation, and bad people don’t; therefore, to determine what policy agenda is the best, it says we should think entirely in terms of who is like us and who isn’t. In American politics, it becomes Republican versus Democrat or “conservative” versus “liberal.” That polarized and factionalized way of approaching public discourse virtually guarantees demagogues, on all sorts of issues, and in all sorts of directions. Demagoguery is a serious problem, as it undermines the ability of a community to come to reasonable policy decisions and tends to promote or justify violence, but it’s rarely the consequence of an individual who magically transports a culture into a different world. Demagoguery isn’t about what politicians do; it’s about how we, as citizens, argue, reason, and vote. Therefore, reducing how much our culture relies on demagoguery is our problem, and up to us to solve.

That’s a complicated—and uncomfortable—argument, and it’s one that needs to start with an argument about what public discourse in a democracy should be, how we should (and shouldn’t) define demagoguery, how demagoguery works, what a culture of demagoguery looks like, and what we can do about it.

Demagoguery depoliticizes politics, in that it says we don’t have to argue policies, and can just rouse ourselves to new levels of commitment to us and purify our community or nation of them. It says that we are in such a desperate situation that we can no longer afford them the same treatment we want for us. But demagoguery rarely starts by calling for the literal extermination of the out-group.

Demagoguery isn’t a disease or infection; it’s more like algae in a pond. Algae can be benign—in small amounts, even helpful. But if the conditions of the pond are such that the algae begins to crowd out other kinds of pond life and ecological processes, then it creates an environment in which nothing but algae can thrive, and so more algae leads to yet more. That’s what demagoguery can do, create an environment of more and more demagoguery. Then, for people competing for media markets, consumers, voters, and so on, demagoguery is likely to be the more effective rhetorical strategy, and more rhetors will choose it. And rhetors have to out-demagogue each other to get attention, buyers, voters.

Weimar Germany (the world in which the Nazis rose) had a lot of problems—intermittently high inflation, high unemployment, a highly factionalized media (much of which promoted racist conspiracy theories), and a government hamstrung by political parties that, making a virtue of fanatical commitment to purity, demonized the normal politics of compromise, deliberation, and argumentation. Those were serious problems, and none of them were going to go away on their own. It’s generally argued that World War I was a consequence of nationalism, militarism, and wishful thinking. There were, therefore, multiple causes of Germany’s woes—but Hitler never talked about those causes. Instead of trying to reduce factionalism, nationalism, militarism, and wishful thinking, or come up with economic solutions, Hitler argued that all of Germany’s problems, especially its having lost the war, but including its current economic ones, could be traced to two real problems: a weakness of will and the presence of alien bodies. Germany needed, he said, more fanatical factionalism, nationalism, militarism, and wishful thinking, which it could achieve by purifying itself of them.

He wasn’t the only one to blame Germany’s problems on them, although there was some disagreement as to who they were. For the Bolsheviks it was capitalists and liberals; for fascists it was Bolsheviks (who were mysteriously interchangeable with Jews) and liberals; for many Christians the problem was the Jews; for others it was union leaders; and the Sinti and Roma were commonly characterized as degraded and criminal. There wasn’t much agreement in Weimar political discourse, but there was nearly perfect agreement that the problem was the presence of a bad sort of person. The “ill” part of the policy argument was truncated to them. Hitler may be the most famous example of a German rhetor who engaged in this kind of demagoguery, but he didn’t invent it.

This kind of rhetoric is the first step on what the sociologist Michael Mann has identified as a journey that can end in genocide, classicide, or politicide—that is, mass murder on the basis of race, class, or ideology. I envision this journey more as a ladder, because each step to a higher rung raises the risk of harm (not just to democracy but physical harm, too). But it’s important to remember that communities that reach that final rung rarely start out with an explicitly exterminationist political agenda. Instead, they start out with a world in which “the ill” is reduced to the presence of some infecting group, and this reduction doesn’t happen as the consequence of one rhetorical magician waving a word-wand. It happens because a lot of people are making that kind of argument. Hitler couldn’t have come to power, let alone tame the Reichstag, hogtie the dissenting press, and hamstring the judiciary, if Weimar Germany hadn’t been a culture of demagoguery.

The lowest rung on the ladder is simply a lot of “us versus them” rhetoric, and multiple groups might be engaged in it with each other. After all, in Weimar Germany, Nazis weren’t the only anti-Semitic, Aryanist nationalist group. Soviet-supported communist groups (not all communist groups were Soviet-supported) similarly said it was an absolutely stark choice between them and everyone else, and they famously refused to compromise with “liberal” or “moderate” groups. During segregation in the United States, numerous states had laws grounded in what “whites” versus “coloreds” could do, not just Southern states. In the 1960s, while the radical rightwing group the John Birch Society called everyone to its left “communist,” the radical left-wing group the Weathermen called everyone to its right “fascist.” Right now, the GOP is engulfed in an argument about who is or is not a RINO (Republican in Name Only), and the Dems seem poised to engage in exactly the kind of purity war that has never served them well.

If everyone agrees that demagoguery is bad, and if there is good evidence that it pushes communities in a direction that can end in genocide, why does anyone engage in it? Why do we climb that ladder?

Good disagreements are the bedrock of communities. Good disagreements happen when people with different kinds of expertise and points of view talk and listen to one another, and when we try, honestly and pragmatically, to determine the best course of action for our whole community. Our differences make our decisions stronger. Democracy presumes that we can behave as one community, caring together for our common life, and disagreeing productively and honestly with one another. Demagoguery rejects that pragmatic acceptance and even valuing of disagreement in favor of a world of certainty, purity, and silencing of dissent.

Demagoguery is about saying we are never wrong; they are. If we made a mistake, they are to blame; we are always in touch with what is true and right. There is no such thing as a complicated problem; there are just people trying to complicate things. Even listening to them is a kind of betrayal. All we need to do is what we all know to be the right thing. And it’s very, very pleasurable. It tells us we’re good, and they’re bad, that we were right all along, and that we don’t need to think about things carefully or admit we’re uncertain. It provides clarity.

Democracy is about disagreement, uncertainty, complexity, and making mistakes. It’s about having to listen to arguments you think are obviously completely wrong; it’s about being angry with other people, and their being angry with you. Democracy is about having to listen, and compromise, and it’s about being wrong (and admitting it). It’s about guessing—because the world is complicated—the best course of action, and trying to look at things from various perspectives, and letting people with those various perspectives participate in the conversation.

Democracy is hard; demagoguery is easy.

Patricia Roberts-Miller, PhD, is professor emeritus of rhetoric and writing, and the former director of the University Writing Center at University of Texas at Austin. She has been teaching the subject of demagoguery since 2002, and is the author of "Demagoguery and Democracy," "Speaking of Race," "Voices in the Wilderness," "Deliberate Conflict," "Fanatical Schemes" and "Rhetoric and Demagoguery." She lives in Texas.