Is Trump a criminal? Maybe — but Comey's testimony leaves no doubt about the president's character

Former FBI director makes clear what he thinks of Trump's personal character. Will Republicans even notice? 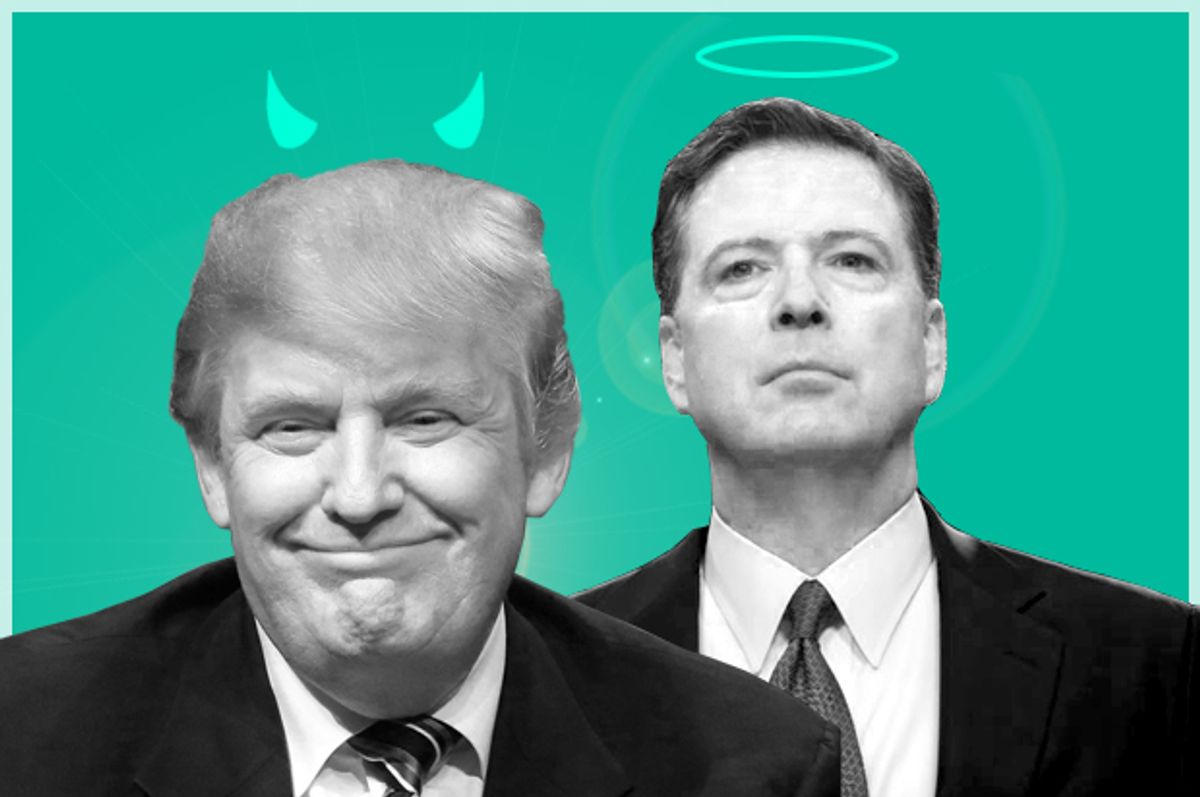 Whether or not former FBI Director James Comey’s testimony in front of the Senate Intelligence Committee on Thursday provided enough evidence for an obstruction of justice case against President Donald Trump (according to a former Justice Department official who helped prosecute the Watergate scandal, it did), there should no longer be any doubt among reasonable adults about the president’s unscrupulous character.

During Comey’s testimony, the former FBI head painted a clear picture of Trump as a remarkably dishonest man without an ethical bone in his body. He called out the president for his repeated falsehoods and said that the Trump administration chose to “defame” him in claiming that the FBI “was in disarray” and that the “workforce had lost confidence in its leader,” which Comey called “lies, plain and simple.” The former director also maintained that he was fired “in some way to change … the way the Russia investigation was being conducted.”

Perhaps the most telling revelation, apropos of Trump’s character, came in Comey’s written testimony, where he explained that he had felt “compelled” to document and keep written records of all his conversations with the new president after their very first meeting. That had not been his practice with President Barack Obama, with whom he only had two one-on-one conversations in four years. By contrast, Comey had six phone conversations and three meetings with Trump in just four months, and the president regularly displayed a lack of ethics that left Comey “concerned that he might lie about the nature of our meeting[s].”

After this stunning disclosure, Comey recounted a dinner meeting he had with the president in January during which Trump asked him whether he wanted to remain as FBI director. “My instincts told me that the one-on-one setting, and the pretense that this was our first discussion about my position, meant the dinner was, at least in part, an effort to have me ask for my job and create some sort of patronage relationship,” recalled Comey. “That concerned me greatly, given the FBI's traditionally independent status in the executive branch.”

In the same meeting, the president twice demanded “loyalty” from Comey, as if the FBI director was expected to serve Trump’s own interests before the law if he wanted to keep his job. This theme popped up again in a phone conversation in April, when Trump asked the FBI director what he had done to “get out” that he was not under investigation. “I have been very loyal to you, very loyal; we had that thing you know,” remarked the president, according to Comey’s written statement. Comey testified that he was unsure what “that thing” meant, but one could venture a guess that in Trump’s mind the two had established in January that the FBI director would be a loyal sycophant if he wanted to remain in his position.

On the most important topic of the day — whether Trump broke the law by asking Comey to “let go” of the investigation into former national security advisor Michael Flynn — the former FBI director offered no opinion, but did say that he had interpreted the president as instructing him to shut down the investigation. That, by definition, is obstruction of justice.

Regardless of whether it leads to an impeachment case or criminal proceedings, Comey’s testimony on Thursday confirmed what has long been known about the 45th president: He is an unprincipled liar who conducts himself like the head of a crime family rather than an elected government leader. This is not surprising, considering Trump’s history of shady business dealings, dubious connections to organized crime and instances of outright fraud (e.g., the infamous “Trump University,” which preyed on low-income and elderly people). Trump was also a close friend and disciple of the notoriously corrupt criminal lawyer Roy Cohn, who served as Sen. Joseph McCarthy’s chief counsel during his anti-communist witch hunt in the 1950s, and who was disbarred in 1986 for “unethical,” “unprofessional” and “particularly reprehensible” conduct.

More than 30 years later, President Trump is now facing a backlash for his own unethical, unprofessional and reprehensible conduct, but it is still uncertain whether the president will face any real repercussions. If we have learned anything over the past few months, it is that Republican politicians are more concerned with protecting their own than protecting democracy or the rule of law. The GOP became the party of Trump in 2016, and its blind, unwavering devotion to the president makes it doubtful whether Trump will ever be held accountable for his nefarious behavior.

James Comey may have declined to kiss the president’s ring, but there are still plenty of Republicans in Congress who are willing to kiss that and much more. Last year, Trump quipped during a campaign rally that he could “stand in the middle of Fifth Avenue and shoot somebody” and he still “wouldn't lose any voters.” Today it seems entirely possible that the president could stand in the middle of the Senate floor and shoot somebody, and still receive unwavering loyalty from Republican politicians and Fox News pundits, who would no doubt mock Democrats for being “hysterical.”

If Donald Trump ever had a moral compass, it stopped working a long time ago. But the New York billionaire is no longer running his own private business. He is now the president of the United States, and he is trying to run the government as if he were the head of the Corleone crime family. Comey’s testimony leaves no doubt about what kind of man Trump is; unfortunately, there is still a great deal of doubt about what kind of men and women make up the Republican majority in Congress.