One carry-on bag and one personal item

Whoever said, "It's the journey, not the destination," probably wasn't traveling with a lap child 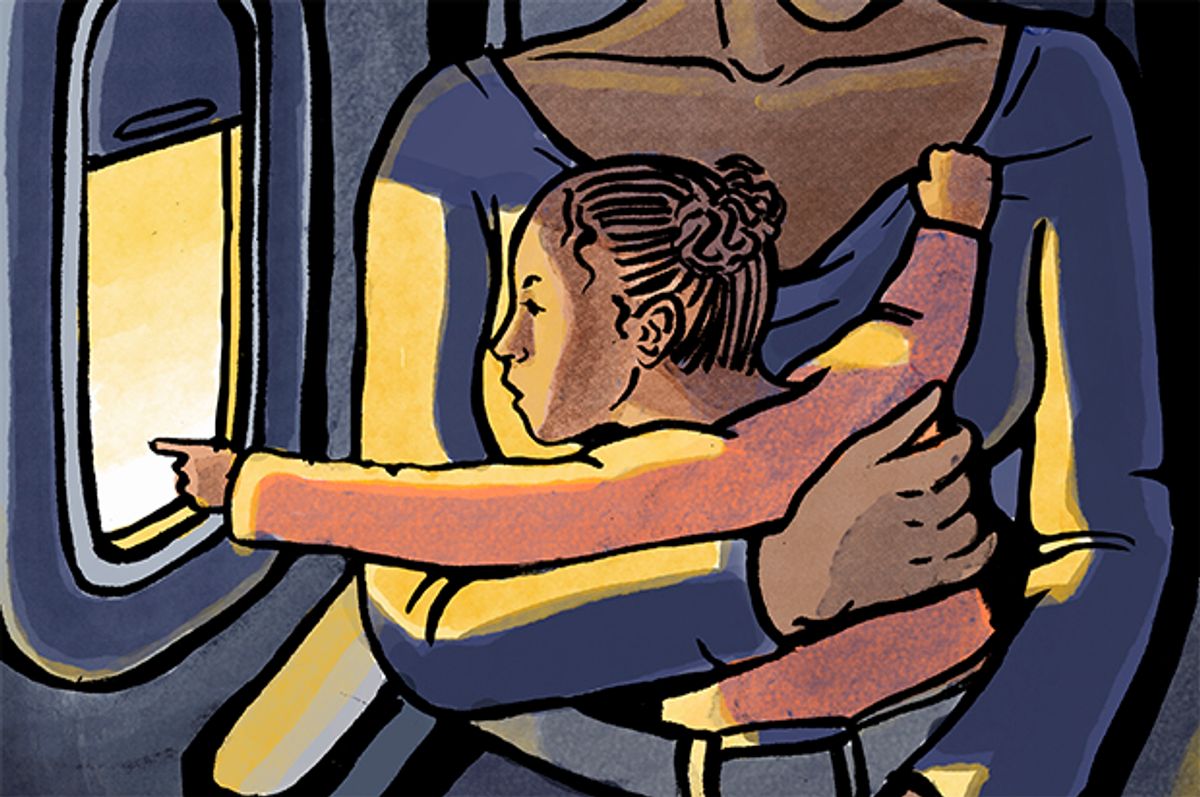 I carried her for 40 weeks, and that was hard and then less hard and then quite hard again. But packing was easy in those days. I couldn't lift a heavy suitcase. I was already bearing the heaviest thing I'll ever bear.

On the road, we were a team. The belly made airport security simple: slip the slip-on shoes off, never a belt to worry about. At the gate, considerate agents made sure the belly and I had aisle seats for expedient lavatory access. On the plane, the belly found solicitous flight attendants. They asked about my pressure stockings, brought me water. My belly and I flew nearly every other week, from week two to week thirty-eight and, traveling with the belly, I traveled with ease.

Then I became a mother, and I had to carry everything for everyone.

When Elizabeth Stone said, "Making the decision to have a child is to decide forever to have your heart go walking outside your body," did she see herself rushing behind that heart, slower now for hauling an overstuffed backpack, a full diaper bag, plenty of snacks?

My backpack held a laptop so I could Skype with my husband, who needed to see his baby was safe. It held a breast pump and a book in case she, but not I, slept through the night.

I stowed the backpack in the overhead compartment, out of reach. "Women and children first," they say, but they should say, "Children first. Then women." I stowed the leg-room-devouring diaper bag directly in front of me.

Once, in the airport bathroom at SFO, I bumped into a friend who was just beginning a cross-country trip with her ten-month-old daughter. My friend's eyes were rimmed with the red that comes before tears that can't be cried because there is too much to be done in too little time. First there had been a disastrous spill. Then, after my friend stripped the baby on the airport changing table and set the new clothes at her daughter's feet, there had been a urine fountain. Now, the baby was covered only in a blanket.

Because sometimes even the cruel world is cooperative, I had a spare outfit perfectly suited for a ten-month-old girl. From our diaper bag, I also produced a plastic bag. I'd add my friend's baby's soiled items to my own as soon as we got home. Once I became a mother, I viewed laundry less as a burden and more like putting the milk back in the fridge, like brushing to delay tooth decay, like any other task I mindlessly complete every day. My friend dressed her baby just in time to sprint onto their plane. Whoever said, "Luck happens when preparation meets opportunity," might have been a mother.

Traveling with a baby, I embraced extremity. In the diaper bag I packed 24 hours worth of diapers. Once we were stranded in Cedar Rapids overnight. Whoever said, "It's the journey, not the destination," probably wasn't traveling with a lap child. It wasn't until we were a block from our Oakland, CA, driveway, nearly 15 hours after our originally scheduled arrival, that my daughter soiled the last of our stockpile.

The theory that "less is more" does not apply when traveling with a small person. I packed two, sometimes three, pacifiers. Pacifiers go missing at the bottom of diaper bags. They get thrown on airplane floors, dragged across airport benches. My daughter dropped one in the gutter of a jet way, that slimy track whose most benign purpose is to catch run-off germs from the soles of strangers' shoes. After that, I packed pacifier tethers to attach binkies to her body. I packed containers to store the pacifiers and their tethers in the diaper bag.

I packed three blankets in the diaper bag, one big fuzzy one and two thin ones because, unless I remembered which side touched my baby and which side touched the world, I would pull a blanket out of rotation until it could be washed. I packed a lightweight changing pad in the diaper bag because more than one flight attendant spoke of babies developing rashes after unprotected sessions on lavatory changing tables.

When Tim O'Brien wrote, "What they carried varied by mission," he wasn't yet a parent, but something in him must have understood. Before the baby, packing too much meant packing for a beach vacation and throwing in five little dresses so I could choose the perfect one the night my friends and some guy I hoped could be more than a friend went to town. Traveling with the baby, I carried these memories with me, but they couldn't take much room. I had to carry other people's memories as well: The harrassed memories of suit-wearing commuters whose brows expressed concern over the potential capacity of my child's lungs; the dreams of would-be grandmothers, their looks laden with longing; the disgusted gazes of teenagers, coated with a touch of nostalgia. I bore the panicked look of parents, the kind of look I didn't want to give to anyone. I contained everything and tried to look calm. If I didn't look calm, if I didn't stay calm, the baby would fret.

A fretful child is a heavy burden.

Before the baby, I thought the song "Don't Worry, Be Happy" was hooey, but as a traveling mother, I understood the core necessity of the philosophy. I packed whatever would help stave off worry. In the diaper bag, I packed clean bibs in one Ziploc, dirty in another. I packed hoards of resealable plastic bags.

Plastic bags, though not toys themselves, were great for storing plush toys and chew toys and rattles in the newborn to nine-month-old phase; crayons, paper, and toy cars later on. I chose not to pack an iPad, but I didn't judge parents who did. I packed soft books and alphabet flashcards, a mini etch-a-sketch, puzzles, and even more books. When I ordered water, I'd ask for a lid and a straw. I'd drink the water quickly, then let the baby play with the cup and the lid and the straw. When she tired of that, I'd pull out a Ziploc filled with crayons and let the baby fill the plastic cup with crayons, dump everything onto the tray table, then fill the cup with crayons again. When she bored of that, out came Ziplocs of Cheerios and the baby played with Cheerios. Out came Ziplocs filled with Goldfish crackers. Resealable plastic bags were great for storing crackers, for storing bottles, for storing full sippy cups, great for storing baby food and Pirate Booty, for storing hope, for storing distraction. Sometimes I worried about the environmental impact of all those bags, but after one disastrous Ziploc-free trip, I embraced plastic's utility. When Seneca said, "If we desire to judge justly, we must persuade ourselves that none of us is without sin," he moderated a tension between my old self, who held staunch opinions about the catastrophic outcomes of the overuse of plastic, and the mother who loved plastic bags because she hated chaos, filth and tears.

Because airlines rarely carry whole milk, even after she stopped nursing I filled resealable plastic "My Mommy's Milk" bags with cow's milk and packed them in the lunch-box-sized cooler I crammed into the diaper bag. I kept a bottle (protected in Ziploc) in the seat back pocket, so the milk could come to room temperature and I wouldn't run the risk of having a wailing child with a cramped stomach in my lap.

When she was nursing, I nursed her through takeoff and landing. Little ears are susceptible to changes in air pressure, and keeping her sucking was insurance against pain. I never started feedings until the airplane's wheels were off the ground. Start during taxi and we might sit on the tarmac all day, my milk dried up and the baby's ears unprotected. As she got older, I'd ask her to yawn, and she would yawn. Or I'd have her drink from the bottle I'd carried.

There was less to carry when she nursed. For privacy, I covered the baby, and sometimes myself, with one of the blankets I'd packed. We became the only two people in world. In addition to shielding the businessman next to me from the idea of my breasts, the tent kept my daughter from being distracted. This was particularly important when, like a thirteen-year-old girl, my thirteen-month-old daughter was looking for something more interesting to do than hang out with her mom. At this stage, it was sometimes easier to feed the kid rice cakes during takeoff and landing. I packed Ziplocs filled with rice cakes.

I packed blueberries and strawberries, cheese sticks, and graham crackers. I bit off morsels of the apples I'd packed and let her eat these small bites. I packed grapes and green beans. A friend sent us a banana guard from London by way of Toronto and I started packing bananas inside this worldly plastic case. I thought I would be the kind of mother who only fed her daughter homemade baby food, but I packed store-bought baby food after I once packed homemade baby food and it spoiled.

I learned to lift my baby's needs above my own.

I packed cheese sandwiches for myself. Then I gave her most of the bread and the cheese. I turned down airplane peanuts because I didn't know if she was allergic. I turned down pretzels because I'd heard she might choke.

Camille T. Dungy is an award-winning poet and editor and professor of creative writing at Colorado State University. She lives with her husband and child in Fort Collins, Colorado.