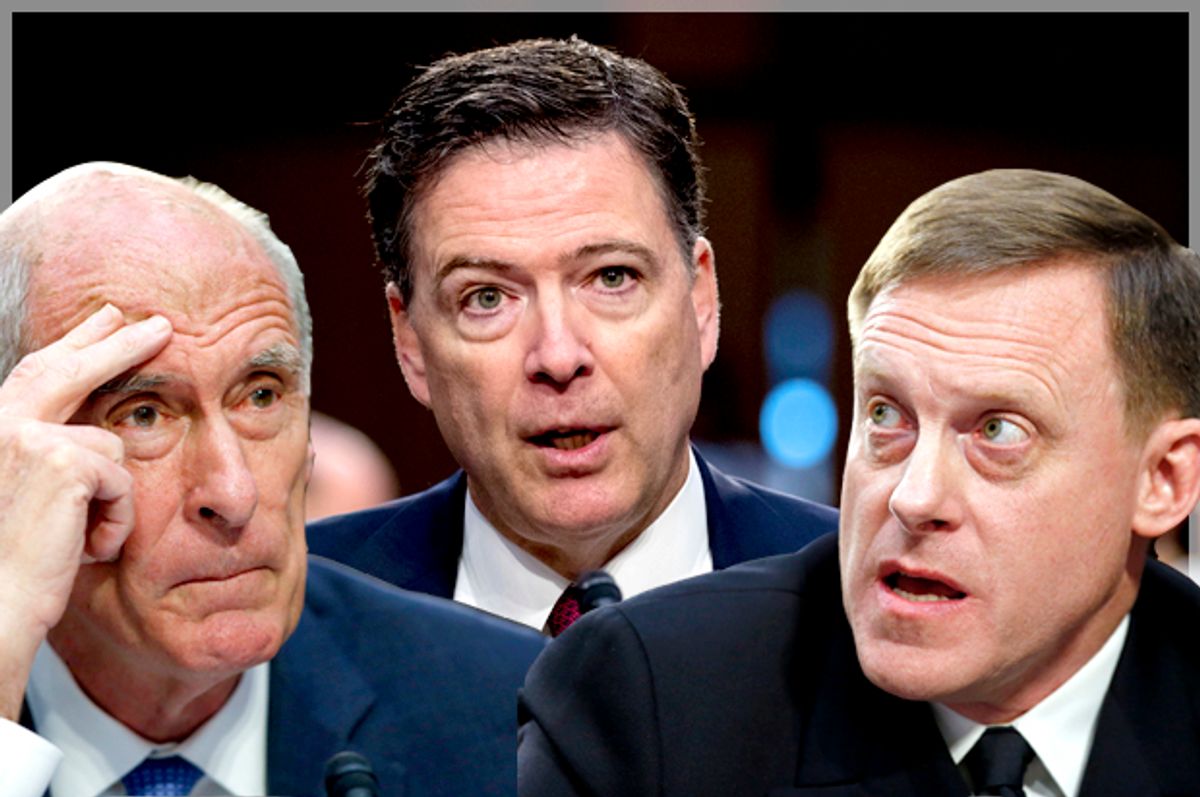 Senator Joe Manchin of West Virginia summed up his week on the Senate Intelligence Committee, listening while four powerful men testified about Donald Trump by furrowing his brow and intoning gravely, “Troubling. This is very troubling.”

What was it that Manchin found so “troubling,” you might ask? Well, on Thursday, their star witness, James Comey, the former Director of the FBI, called the president of the United States a liar. Wow. That is troubling, Senator, learning that a man who lies as often as he breathes is a liar. Thank you, James Comey. Thank you, Senators. Nobody knew. Finally we’ve got that cleared up.

That was quite literally the big news out of two days of strutting egos and bad hair. Trump is a liar. Oh, I almost forgot. Donald Trump is a liar, and now that we’ve heard this important news flash, we’re going back to raising money and begging for votes and leave the whole damn thing on the shoulders of Special Counsel Robert Mueller. That's what Comey was saying on Thursday every time he answered with "I can't talk about that in open session."

That’s what Dan Coats, the Director of National Intelligence, and Admiral Mike Rogers, the Director of the National Security Agency, were saying every time they refused to answer questions put to them repeatedly in the Intelligence Committee hearing on Wednesday. They were asked over and over again whether they had been asked or told by the president to intervene with the FBI investigation of the Trump campaign's Russia connections or the investigation of Michael Flynn. Over and over again, they either said they couldn’t answer the question in an open hearing or they thought it was "inappropriate" to discuss their private conversations with President Trump. When asked directly if the White House had claimed executive privilege and that was the basis for their failure to answer questions, both men said that there had been no such claim. Coats even admitted that he had no legal rationale for refusing to answer.

Coats, Rogers and Comey — all three of these very powerful men refused to answer every single question of any consequence put to them. Over and over again they said they couldn’t speak about this or that in “open session.” Over and over again they claimed that the only questions anyone with a functioning nervous system wanted to know the answer to were so sensitive that we couldn’t hear them. And oh, by the way, the Special Counsel is handling that now, and they all just love Big Bob Mueller. He’s constantly standing by like a Republican shock-absorber, ready to smooth out the potholes and fallen boulders left on the road by the hacks who run things in Washington.

One of two things is true. Either Coats, Rogers and Comey are in on the cover-up with Trump and because of this are concealing the truth, or what they have to say is so explosive that merely knowing that information scares them to death. When asked whether they were aware of evidence of collusion between Trump campaign officials and representatives of the Russian government, all three said they couldn’t answer that question in an open hearing. When asked whether Trump had told them to influence the FBI investigation and help him to get it ended, Coats and Rogers demurred. When asked whether Trump was trying to get him to end the FBI investigation of Russian hacking when he said, “I hope you can see your way clear to letting this go, to letting Flynn go,” Comey demurred.

All three men are well aware that this act by the president — trying to interfere with an ongoing FBI investigation — was the charge in Article 1 of the Bill of Impeachment against Richard Nixon. Asking them that question was like asking them to put their hand on the burner of a gas stove turned up high. That's what they were doing when all three of them said it was up to Mueller now. They were demurring.

These guys are good at demurring, especially Comey. Did you listen to his testimony? That's what Comey did, over and over again. He demurred. Did you catch his pathetic whine that he wished he had been "stronger" when Trump held him up against the wall in the Green Room and slapped him in the face with the well-done steak of “loyalty”? Trump basically demands that the chief law enforcement officer of the land will bow down to him, and Comey just sits there and doesn't move and doesn't change the expression on his face . . . and he BRAGS ABOUT IT?

Comey was the luckiest citizen in the United States for about three months. Alone among all 325 million of us, he had chance after chance to stand up to Trump and tell him no, I'm not going to do that. No, I'm not going to stop the investigation. No, I'm not going to pledge my loyalty to you. Loyalty, sir, is something that if you have to demand it, you sure haven't earned it. Comey could have called Trump's bluff about five times, and what did he do? He didn't change the expression on his face.

I read an article comparing the position Comey found himself in with Trump to how a woman feels when she's being sexually harassed by her boss. The writer recounted Comey just sitting there and not moving even a muscle on his face, basically hoping that this would stop, to how it often goes when a powerful boss is sexually harassing a female employee. Trump might be an asshole boss, but Comey wasn't trapped in an office with him with no way to fight back. Comey is six feet eight inches tall. He could have stood up at any time and looked Trump in the eye and said fuck you and walked out of the room. Sure, it would have gotten him fired. But he got fired anyway, without ever standing up to the asshole boss and calling his bluff. Comey may have sat still and not moved his facial muscles, but he was supine in the face of illegality, ignorance and impudence. Each and every time Comey spoke to Trump, he failed in his duty to protect and defend the Constitution of the United States. If that's the way he was running the FBI, he deserved to be fired, and we're better off without him.

As for the senators on the Intelligence Committee, they sat there on Wednesday and Thursday and put on their best Serious Faces, and they read from lists of completely innocuous questions, and they thanked Coats and Rogers and Comey for their noble service to their country, they thanked the men for coming before them and agreeing to testify; hell, they thanked Comey for everything but being six feet eight and agreeing to sit down so he wouldn't tower over their quivering gutless asses. Then they proceeded to extract not one scintilla of testimony that might be said to have been consequential.

Comey and Coats and Rogers whined and threw the whole mess in the lap of poor Robert Mueller, and the senators thanked them for throwing it all in Mueller's lap because now they could go back to their voters and beat their chests about the big hearings the senators had held without actually accomplishing a single identifiable thing.

Poor Robert Mueller. He woke up on Monday and went to work and by week’s end the entire country had been loaded on his shoulders, because over there in some drab hearings room in some drab Senate office building, a whole bunch of chickenshit assholes playing the role of "senator" and "former FBI Director" and “Director of National Security” and “Director of the NSA” had run for the exits and called out over their shoulders, "Ask Bob Mueller. It's in his court now."

Well, if Comey, Coats and Rogers are so afraid they want Mueller to answer for them, then what could the answers be? Here’s what they didn’t tell us. Here’s why Mueller just hired a former Watergate prosecutor. Here’s what all of them know but won’t tell us: Trump is dirty. He's guilty of something so bad he fired the director of the FBI trying to keep it covered up. He's running scared. Trump obviously figured that actually obstructing justice by trying to influence a criminal investigation by the FBI was preferable to having that investigation discover what he is covering up. That prospect scares him to death. There is only one question remaining to be answered, really. What information could be so damaging to Trump that it's worse than obstruction of justice, a federal crime and an impeachable offense?

There are only two things Trump really cares about: money and sex, probably in that order. Think back to the Access Hollywood tape. It revealed one thing above all others, that Trump was delighted in an almost adolescent way with the power his fame had given him over women. He could kiss them at will. He could even grab their pussies. He talks about money in the same way. He’s not just a billionaire. He’s worth 10 billion dollars! And he earned all of his money because he’s not just a good deal maker, he’s the greatest deal maker in the world! He may not have written “The Art of the Deal,” but he read it! Most recently, we learned from Forbes Magazine what Trump said when he discovered that his son's foundation had been using Trump National Golf Course in Westchester County for charity events without being paid for it. Trump  told his son, the Trump Organization gets paid. Money comes first. His money comes first. It's really all he's ever had, all he's ever lived for, the only way he's ever measured himself. How much money he has. Getting paid.

There's something out there having to do with Russians and money and Russians and sex. Money laundering? Illegal loans? Offshore payments on which he hasn't paid tax? Hot and cold running hookers? Peepee parties? Whatever it is, Trump is afraid of it coming out not only because it will cost him the presidency, it will cost him his identity, his manhood. It will cost him who he is.