“States of Undress”: Fashionable models and the fashion of models for social change 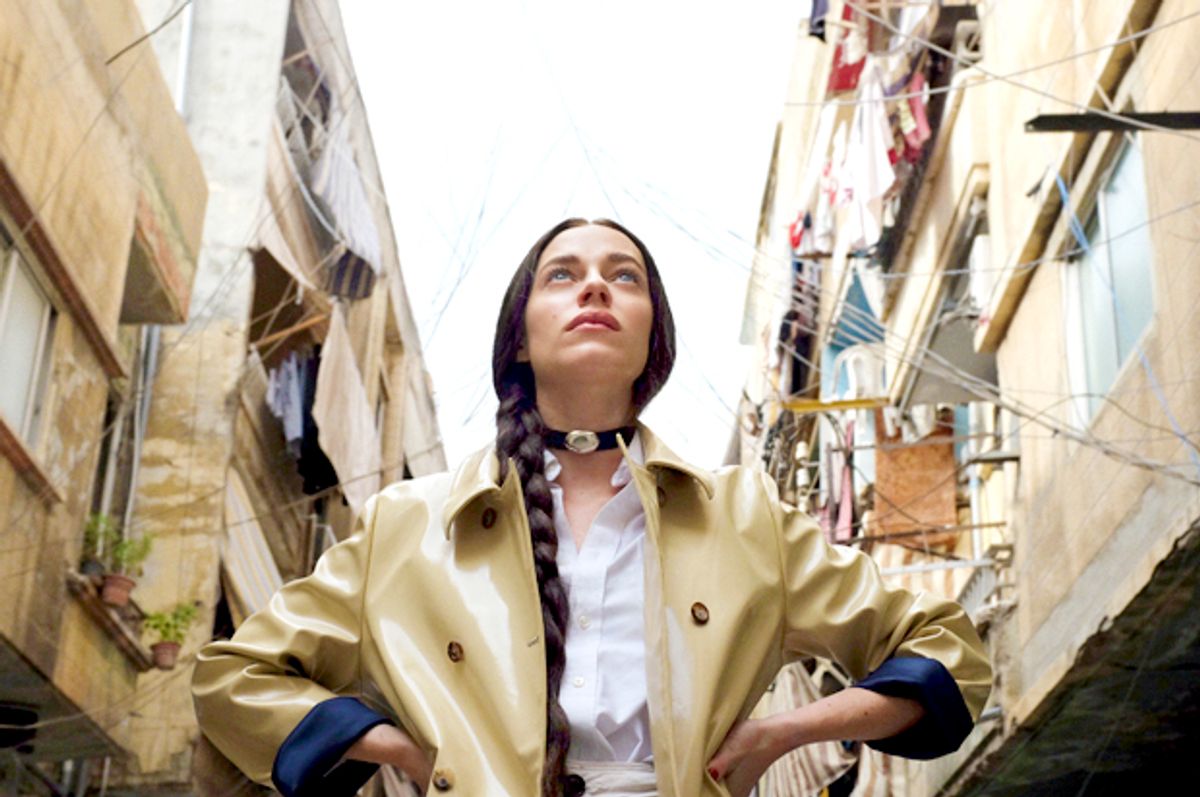 With her long, ropy, signature braid and high-waisted pants, Hailey Gates may well be the millennial answer to early-career Oriana Fallaci, or perhaps fashion’s answer to Anthony Bourdain. Seemingly comfortable in any patois, the polymath model/writer/actor (“Twin Peaks”) travels to such far-flung locales as Liberia, Mexico, France, Romania and even Independence, Ohio, to document "fashion shows and under-reported cultural phenomena," for her Viceland docuseries, “States of Undress,” now in its second season. What emerges in toto isn’t so much that Liberia or Independence is the next Paris or Milan, as much as how these unexpected local fashion shows provide a portal through which to explore greater issues of gender, cultural identity, class and race.

Viceland launched as a 24-hour, millennial-focused cable channel in February 2016, headed by creative director Spike Jonze (“Her”). While the rest of the world seems aware of the fact that cable is on the verge of becoming extinct, Viceland decided  to go for broke and establish itself as the “world’s preeminent youth media company and content creation studio.” Scanning through their menu of offerings — one of their programs is “Balls Deep,” another is “Bong Appétit!”— the selections seem like standard if irreverent Guys-Doing-Stuff fare, at least until you get to “Jungletown,” a docuseries about building a sustainable town in the Panamanian Jungle, or Ellen Page’s Emmy-nominated “Gaycation,” and Gates’s “States of Undress,” both of which are perhaps an attempt to lure in more thoughtful female viewers with socially conscious travel shows hosted by . . . wait for it . . . self-aware young women!

Watching “States of Undress,” you almost forget about the fashion element, and embark on an engaging Lonely Planet guide to life’s stark realities. Though Gates remains utterly fashionable and lovely at all times — no one has ever made puffy sleeves look quite so effortlessly unfussy and chic — there is, above all, a drive to depict topics of historical and political relevance, such as the Second Amendment in the U.S., commercially sexually exploited teens in Liberia, and Cholo culture in Mexico, where Gates and the leader of the Cholos both sport the same Nike Cortez. A shot of the Face of Miu Miu riding on the back of a Cholo’s bike suggests a kind of easy solidarity, the leitmotif of the series — the idea that Gates is as down with the community of Neza City as she is with the punks or the Emos or the high-fashion crowd. Throughout, she is with it and wise as she discusses street style, as well as the challenges and benefits of belonging to any one of these particular subgroups. The fact that she fits in everywhere makes sense: Gates is likable and funny. But what is she saying about fashion? Is it the great equalizer or the unattainable dream?

“I ate better in Liberia than I did in Ohio,” Gates tells a group of people at the New York press screening of “Packing Heat in Heels,” the season 2 premiere episode. The crowd chortles knowingly. As someone who went to college in Northeast Ohio and has spent a lot of time in Africa, I find this hard to believe, but maybe Gates doesn’t like cheese or the breadsticks at the Olive Garden. “Everyone on the crew was on the anti-gun spectrum of things but we didn’t set out to solve the gun debate,” she adds. “The gun may be an item that frightens you, but the only way to figure out why it does is to talk to people that wear it or carry it.”

Meanwhile, to the people at the screening, Independence, Ohio might as well be a foreign country. The episode boasts a population of Glock-totin’ grannies and double-X-chromosome NRA enthusiasts who while away their every free moment at gun ranges or gun club meetings or the gun stores that pepper the bleak, snow-covered landscape like the ubiquitous fast-food restaurants. Suddenly, a gun is both a totem object and a fashion accessory that demands a special cute purse. Depending on your stance on the second amendment, this is either a nod to equality — why shouldn’t women have their own gun accessories? — or unnerving. That is, until you watch the Liberia episode and witness the child soldiers with their assault rifles. At the screening, however, an audience member asked why the women of Independence carried guns yet appeared hesitant to call themselves feminists.

“It’s a really interesting word,” Gates admitted, shrugging. “Every time I asked someone if they were a feminist, I felt like they recoiled in fear.” Again, the audience laughed knowingly, as if to say, we are all proud feminists who would never, ever be caught dead in an Olive Garden.

Still, one question continues to surface: Does imposing the elitist construct of a fashion show on cities with unresolved urban blight or nations with zero social services do more than expose extreme nana-nana-boo-boo class imbalance? Is fashion frivolous or is it a political act? And where did Gates get those overalls?

“The ruse is to come into things from left field and talk about what’s going on though the side door,” Gates tells me. “I don’t do the news. Fashion is unique. It’s a leveler, not a divider. High fashion has become representative of stability in unstable places; that allows you to have a voice in the world stage.”

This seems to be true especially in Liberia, and especially in the aftermath of Charles Taylor, found guilty of crimes against humanity, and Ebola, which killed more than 4,000 people. The episode “Clothing and Corruption in Liberia” pits the footage of child soldiers and Ebola cleanup with fabric finding, hair braiding and fashion-show prep in a city with highly unreliable utilities. Gates sits on the ground in a blighted area, asking a very pretty commercially sexually exploited teen what she wants to be and the girl replies, “a model.” The futility of this moment is palpable. You almost want Gates to stay in it and address it further, though that isn’t the point of the show either.

The clothing — in Liberia Jones is fitted for an authentic African ensemble — exemplifies the struggle and hope of the country, as well as its attempt to modernize. This is where “States of Undress” is at its most interesting, multifaceted and folkloric. Standing in her new outfit, Gates asks, “How’s my white-girl level of offensive?” (She has just interviewed a female tailor about her tragic journey being ostracized following an Ebola outbreak.) Archel Bernard, the Americo-Liberian designer of the dress and founder of The Bombchel Factory, replies, “It’s super awesome. It’s zero to Rachel Dolezal. Just kidding.”

Next, the hijab/burkini episode in France makes Trump’s America seem liberal and tolerant, so that’s nice, especially if you spend your days freaking out about 45 on social media. Ever the grand nationalists, the French passed a law banning the wearing of the hijab or niqab or any other overt religious symbols in schools, ostensibly to protect students from Islamist proselytizing (Barack Obama publicly denounced this law in 2009). In this episode, there is no fashion show, because, really, but Gates accompanies two girls to their school and stands outside with them by a mirror, placed there for the express purpose of veil removal. Meanwhile, the principal stands by waiting as the two girls begin to unwrap their heads.

The mirror is as warped as this practice, which seems both ridiculous and medieval, until you remember the French, the Vichy and their anti-Semitism and xenophobia in general. Again, we see an item, a veil, imbued with mistrust and pathos. Next, a bathing costume inspires rancor and a fight on the beach. You almost forget that Gates is in a burkini too. That hers is a one-off. There’s something about the way Gates slips in and out of costumes and identities that’s either deliberately telling or facile. She’s too smart for the latter, yet what is meant by the former? We are left to ponder this resonance.

“There’s so much build-up around this controversial garment,” Gates says. “We have a unique format to tell this story through an item of clothing. The episode is a warning to us that it can go this far. Our far right is always associated with Christianity. But in this case some of the kids are militant about atheism. There’s a divide. Everything is complicated.”

Part of this complexity is the French Muslims who actually approve of this law and want their daughters to be Muslim Frenchwomen -- but they are left out of the episode. Then again, it’s challenging to say what exactly comprises the voice of authenticity in this or any country. Even Gates, originally a Francophile, admits to changing her tune after this hijab-ban knowledge bomb.

After I deliver a soliloquy about France and the Jews, Gates replies, “We have to recalibrate ourselves. I’m always interested in going to places where our country is perpetuating certain stereotypes, like Iran, because of Trump’s anti-Iran rhetoric, or just ‘the boogey-man countries’ in general. As frivolous and strange as all the things we cover supposedly are, that’s hopefully the success of the work.”