One of comics' best writers is a former CIA agent 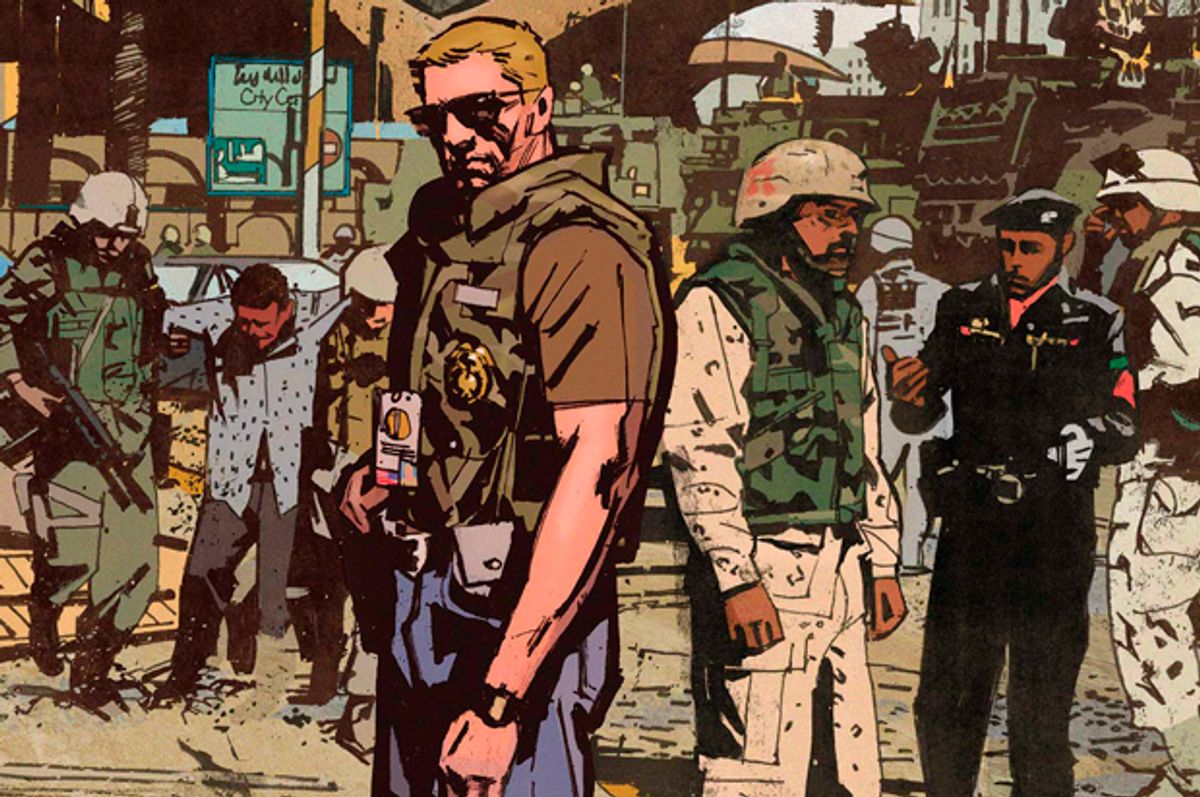 How do you become a comic book writer? Take a class? Schmooze at comic conventions? Start a web comic and hope it catches someone’s eye?

For Tom King, the path to comic stardom took an unusual detour. King was working toward a career in comics when the industry was in a mid-'90s tailspin, so he switched gears and ended up working in the Justice Department.

When 9/11 happened, King joined the CIA, where he became a counterintelligence officer. After spending seven years in the agency — and writing a novel about superheroes called “A Once Crowded Sky” — King landed a job co-writing “Grayson” for DC in 2014.

In the short time since, King has penned three legit 12-issue classics: “Omega Men” and “The Sheriff of Babylon” for DC and “The Vision” for Marvel. He’s in the midst of a best-selling run on “Batman” and has another 12-issue series coming out in August: “Mister Miracle” (one of Jack Kirby’s New Gods) with Sheriff co-creator and artist Mitch Gerads. No writer in comics has made a bigger impact in so short of time, thanks to well-crafted, unflinching, humane comics — which are often about best intentions gone wrong.

Most of King’s work has been for DC, who he has an exclusive contract with, but before signing that deal he pulled off one of the best Marvel series in recent memory: “The Vision.” This multi-colored synthezoid (a type of android) is a longtime supporting character and member of the Avengers who had never been featured in his own series.

King (with artist Gabriel Hernandez Walta and color artist Jordie Bellaire) stayed away from superhero stuff and made straight-up, Stepford-ish sci-fi, featuring the Vision’s bizarre attempt at making (literally) his own family in the D.C. suburbs: a synthezoid wife and two children. This artificial family’s real problems compound over time, much like the tragic plot of TV shows such as “The Shield” and “Breaking Bad.” The result is a horror story — and the worst advertisement for the suburbs, ever.

“Omega Men” (illustrated by Barnaby Bagenda) touches a little closer to King’s CIA experience, creating analogues for real-life terrorism in the 8-decade-old DC universe. The chief MacGuffin of the series is a substance with a classic comic book name: stellarium.

The theory is that if you pump your planet full of stellarium, the core will stabilize and never explode, like poor Krypton. The only problem is stellarium extraction leaves other planets uninhabitable. Using this concept, King constructs a brutal war story with no white knights. The closest thing to heroes are the terrorists — the Omega Men — who fight the Citadel, the government that extracts and sells stellarium, casualties be damned. “Omega Men” is a devastating story that flips real-life situations on their head, much like the best episodes of “Battlestar Galactica.”

The third of King’s trio of modern classics is based directly on his CIA experience: “The Sheriff of Babylon” is a crime story set in Iraq during the time King was there, from February to July 2004.

In an interview with the Hollywood Reporter, King said, “The book is built out of my experience, my impressions and my memories of that time." He continued, "One of the main memories I have is that, by the time I got there — about a year after the invasion — it wasn't about politics anymore. The people there weren't too concerned about the politics, they were just trying to do something right and every time they tried to do exactly that, it fell apart in their hands. Their best intentions led to the worst results. That's what we're trying to get at.”

This is the dominant theme in across King's work. He's even called his Omega Men, Sheriff and Vision his “trilogy of best intentions.”

“The Sheriff of Babylon” is a murder mystery that features plenty of non-mysterious murders, too. But there are also moments of light and humor, not to mention tremendous insight.

At one point, Chris (an American contractor training Iraqi police) and Fatima (wife of Nassir, a former police officer for Saddam) get drunk together and talk about 9/11 in brutally honest ways. Chris mentions he had interrogated one of the 9/11 bombers a few years before, not knowing who he would turn out to be. Fatima admits she may have celebrated a teeny bit when America was attacked, because American sanctions against Saddam had prevented her from getting batteries and other supplies. This conversation is one of most real and heartfelt takes on 9/11 in any medium. Chris and Fatima share a wish about all they’ve seen and gone through: “It should mean something.”

King and Gerads — who have also collaborated on some issues of King’s Batman run — have quickly become one of the most simpatico creative teams in comics, right up there with Ed Brubaker and Sean Phillips, Garth Ennis and John McCrea and Grant Morrison and Frank Quitely. It’s no accident that the best issues of King’s Batman run have come when paired with Gerads. A recent issue features an unlikely team-up with Man-Thing, who is investigating the murder of his father, which has huge resonance for Batman. A two-parter illustrated by Gerads was the best Catwoman story in years, bringing a maturity (emotionally and sexually) to the Batman-Catwoman relationship that’s too often missing.

King and Gerads are now working on “Mister Miracle,” about the an escape artist and demigod who was part of Jack Kirby’s sci-fi mythology the Fourth World, which he launched at DC after leaving Marvel in 1970.

King recently told Paste about his appreciation for this mind-blowing epic: “If you actually read the New Gods tetralogy, this epic without an ending, it’s like dipping your head into madness . . . He [Kirby] touched the id of America and let it flow through his fingers. There are a thousand ideas on one page and they don’t add up and then they do add up and they come apart and they come back together." He continues, "Half of them are an easy metaphor to see and then the metaphor falls apart. It’s just utter insanity.”

It’ll be intriguing to see what King, whose scripts are meaty yet disciplined, will do with the wildest ideas of the King of Comics. They both have the distinction of serving their country overseas, while King is fortunate to work in a far more creator-friendly comics industry, which he makes the most of.

Whether writing about space terrorists, real-life terrorists, suburban androids, or that famous guy in the Bat costume, King always manages to make his comics mean something. Smart money says we’ll be reading his trilogy of best intentions for decades to come.