Enough with your "Twin Peaks" theories already, you're ruining it

Yes, it's fun to theorize about "Twin Peaks: The Return," but it's undermining the whole point of the series 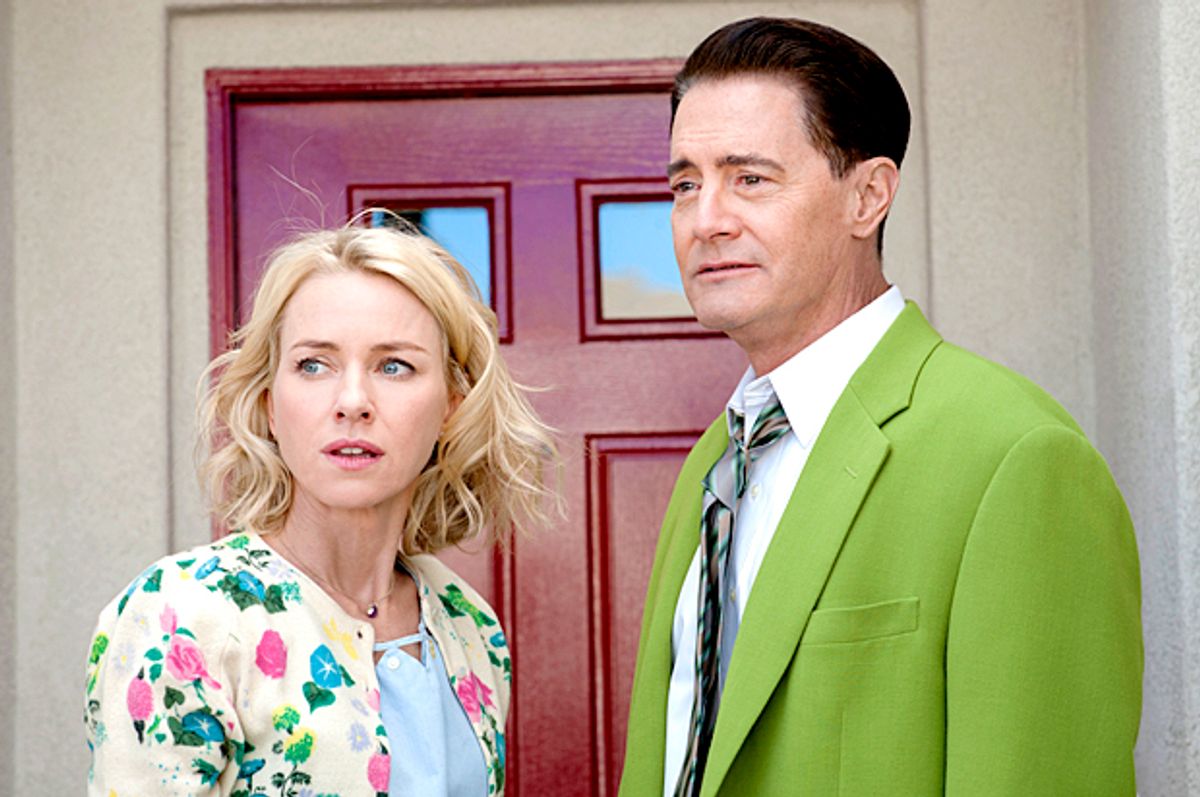 Of all the lame-o, quarter-baked “theories” surrounding Showtime’s revival of “Twin Peaks,” by far the most eye-roll-inducing is the idea that at some level the show is about the act of watching television itself.

Take the case of the show’s mysterious glass box, kept in a mostly-empty industrial room, watched by cameras and an affectless young man (Ben Rosenfield). About this, one canny re-capper wrote, “The ostentatious presence of the cameras in this desolate room, and the young couple’s (initially) patient, vacant stares at them are obviously a remark upon the creation and the consumption of television and film.” Yes, “obviously.” Another, more recent theory, suggests that the central mystery and “dramatic engine” of the new “Twin Peaks” is the whereabouts of the old, nostalgic, quasi-ironic, coffee-n-pie quality of the original series.

Many things have happened since viewers were last lured into the weird world of David Lynch and Mark Frost’s “Twin Peaks.” There was 9/11 and the tectonic shifts in notions of “everyday” American existence about which David Lynch seems particularly suited to comment. The return of Russ Tamblyn’s Dr. Jacoby in the most recent episode, recast as a survivalist conspiracy vlogger peddling gold-tinted “shit shovels,” for excavating oneself from the muck and mire of modern life, stands as the most obvious comment on this new American mood.

There was also the ascent of the much-ballyhooed “Golden Age of Television” and the accompanying rise of television writing and criticism (and in particular, the granular episode-by-episode recaps that have become, for many viewers, part of the ritual of television viewing itself.) Indeed, watching and reading about TV has become a ceremony so cliched and solipsistic that now it’s an obvious, taken-for-granted truism that the subject of watching (and reading about) television is television itself.

“Twin Peaks: The Return” destabilizes something of this ouroborosian practice. An epic, 18-hour TV series conceived of as a single “event” (to use the promotional cant of TV’s Golden Age), seemingly cleaved into hour-long episodic chunks more by necessity than convention, the series is defiantly un-recappable. Five episodes (or “parts”) in, “The Return” does a fine job subverting—or, more likely, just plain ignoring—the staid conventions of appointment viewing prestige TV.

Lynch, for his part, exhibits little use for that go-to trope of so much modern television: the cliffhanger. Instead of baiting the audience to return week after week to see what’s become of their favorite character, the new “Peaks” episodes tend to close either on live performances of bands playing the Bang Bang Bar, or on lingering, melancholic images, such as the shot of Agent Cooper (Kyle MacLachlan) shifting his weight near a statue of an American lawman that capped off “Part 5.”

While wary about levying any broad, general appraisals about “The Return” this early on, it feels fair to say that this is very unlike television. As with the original ABC run of “Twin Peaks,” it contorts and expands our expectations of the medium. (This makes the new series spiritually akin to its network TV predecessor, while also remaining totally unlike it, too.)

This hasn’t stopped the internet from attempting to flatten it, to make it seem like just another TV show, attacking it (and “unpacking” it) with the same set of dulled critical tools. In articles, podcasts, YouTube videos, Reddit threads and lengthy interviews with the show’s creators, people seem hell-bent on subjecting “Peaks” to the gauntlet of contemporary TV criticism.

The most curious among these tactics have been extensive interviews with David Lynch. In print and on camera, Lynch rarely offers any actionable intel on the series. A by-the-numbers Q&A with David Lynch usually looks a little like this:

Interviewer: "Can you give as a clue how [plotline X] might develop?"
Lynch: "No."

This isn’t to say that Lynch is being deliberately cagey or obtuse. Rather, such obfuscations are the essence of his artistry. He is driven by instinct and intuition, drawn in by images more than characters or stories or even ideas. In this sense he is very much reflected in “Twin Peaks’” Zen Boy Scout detective, FBI Special Agent Dale Cooper. Both are driven by feelings and hunches that border on the extrasensory; both have ideas and inklings galvanized by the wacky, backward-talking wisdom of dreams. And as with Cooper, Lynch’s instincts lead him into dark, anguished places — the tortured corridors of the human psyche, the barely secret seedy underbelly of American life, the places where dream-logic curdles and twists into the uncanny and nightmarish.

Lynch isn’t being coy or withholding when he talks about “Twin Peaks” in oblique abstractions. What’s more likely is that he cannot describe what he’s doing because it exceeds description, because it’s all about ephemeral, fluttery stuff like instinct and feeling and gut-level discomforts. It’s like when you try to describe a dream, only to find the imagery and sensations, which seemed indelible upon waking, drifting away, back into the ether.

Lynch is often called a “surrealist” in that soft sense that borders on total meaninglessness (i.e., he makes weird, wacky images!), but the term fits in the stricter sense: His work explores the interplay of dream and reality, of consciousness and unconsciousness.

Making sense of “Twin Peaks” using the same critical arsenal we’ve become accustomed to (episode recaps, conspiratorial YouTube videos, even the standard press junkets) risks spoiling the power of this. It’s an attempt to enforce the regime of consciousness, of ordering and analyzing and sense-making, onto a work of art that belongs to another category entirely. It just doesn’t work.

Case in point, in an effort (some might say strained desperation) to make sense of the new “Twin Peaks,” some have fallen backwards into recursion, believing the series to be about TV itself, or even “Twin Peaks” itself.

One of the enduring elements of Lynch’s work is that everything does fit, in Lynch’s own strange, singular way. As much as terms like “weird” or “impenetrable” or “random” dog his work, there’s always a kind of coherence that emerges. “Mulholland Dr.” may be a definitive “puzzle box” movie (it even includes its own puzzle box), but it hangs together intelligibly as the story of an aspiring actress (Naomi Waitts) ground through the unfeeling machinations of Hollywood star-making.

Likewise, “Eraserhead” apprehends a spiked anxiety around paternity, and “Lost Highway” twists feelings of guilt, bitterness and seething jealousy into a jazzy horror-fantasy of self-denial and mistaken identity. Interpreting such works using conventional critical methods of close-reading and clue-following makes about as much sense as using a ruler to measure the radiance of a flickering light bulb.

Like much of David Lynch’s best work, “Twin Peaks: The Return” can feel totally inscrutable (and, yes, very “random”). But it should be remembered that such inscrutability is a feature of the work, and not a bug. Sure it can seem puzzling. But arguably the point of the show is to be puzzled — to instill the unnerving, exciting sense of puzzlement itself.

As MacLachlan’s Agent Cooper puts it to police liaison Harry S. Truman back in the series’ original ABC run, as they inspect a cave full of mysterious petroglyphs that they hope can lead to them to who-even-knows-where, “Harry, I have no idea where this will lead us, but I have a definite feeling it will be a place both wonderful and strange.”