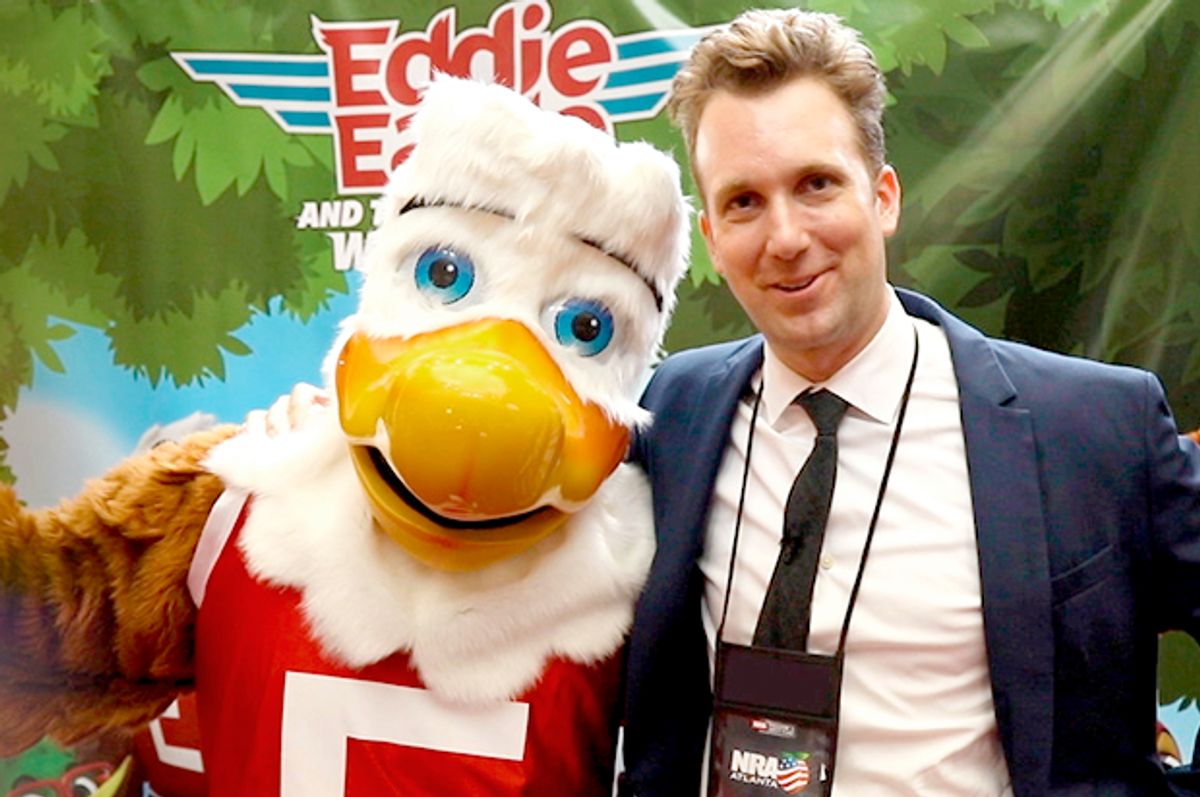 Spoiler alert: After covering all the key aspects of our nation’s fascination with firearms in “Jordan Klepper Solves Guns,” Jordan Klepper does not actually solve guns.

Look, if Americans couldn’t come together to solve guns after the mass shootings at Sandy Hook Elementary in Newtown, Connecticut, or the attack at Pulse nightclub in Orlando, Florida, a self-satisfied satirist probably isn’t going to do the job, regardless of his declared qualifications. “I’m enlightened, I’m progressive, and I feel like I was put on this earth to enact righteous change,” Klepper says at the top of the special. “AKA, I’m a 2017 comedian.”

Klepper further solidifies his credentials by listing the number of brown rice cookers he owns (4) and his tally of gay friends (12) and podcasts he hosts (5) prior to announcing his mission. As a member of the media elite against whom the National Rifle Association's president, Wayne LaPierre, has declared war, he says, he is taking it upon himself to fight back by changing the minds of millions upon millions of American gun owners, one at a time.

In his capacity as a correspondent for “The Daily Show with Trevor Noah” (and with Jon Stewart before that; he's been with the show since March 2014), Klepper has sculpted a know-it-all persona a few shades less extreme than Stephen Colbert’s parody of a conservative. Tall, pale, gawky and convinced of his superiority, he's a caricature of a smarmy liberal white man convinced that he’s blond, blue-eyed Jesus' gift to an ignorant world. Just listening Klepper archly utter the words, “I’m woke!” is enough to elicit a spit take. He's colossally funny, in doses.

“Jordan Klepper Solves Guns,” debuting Sunday at 10 p.m. on Comedy Central, is familiar territory for the comedian. He has previously taken on the subject in a two-part report aired in 2015, one that blithely picked apart the “good guy with a gun” myth that politicians and pundits circulate following mass tragedies involving firearms.

In that segment, he first he secures a concealed weapons permit by mail and then he endures a field test with the help of seasoned law enforcement professionals. Unsurprisingly, Klepper found that the typical gun owner is not at all prepared to respond to a crisis, even if he or she happens to be armed. That’s common sense, but watching Klepper tremble while taking one round after another humorously proves that point.

Klepper makes more discoveries about his relationship with guns in Sunday’s hour-long special, while spotlighting an important truth about guns and the majority of gun owners. He finds that regardless of where they stand on the political or philosophical spectrum, most desire a sensible approach to background checks and regulation. More than that, he reveals that many of these gun lovers disagree with the ways the National Rifle Association focuses its political influence.

During the hour, Klepper speaks with New Jersey Sen. Cory Booker, NRA lobbyist Richard Feldman, a group called the Georgia Security Force militia, a former special operations soldier with the Army, as well as a family member who represents the moderate (and typical) voice of gun ownership. To Klepper’s great credit, none of the subjects featured in the special come off as utterly insane. Even the militia group leader mostly just seems nervous in front of the camera. (Said militia group also includes a person of color among its members, something we don’t normally see on a television show.)

Klepper's special also proves that the standard fake-news field segment is most effective in 5- to 10-minute doses, tops. An hour won't “solve guns,” but it’s way too long to stick with the zany, smarty-pants style that "Daily Show" fans have grown accustomed to. The “Good Guy with a Gun” report ran during two separate “Daily Show” episodes and clocked in at just over 11 minutes in total. That was sufficient.

At the same time, a viewer may understand why Klepper feels strongly about the subject. His hometown of Kalamazoo, Michigan, was the site of a spree shooting in February 2016 when a 45-year-old Uber driver named Jason Dalton allegedly shot and killed six people and wounded two others. According to Klepper, the special was in the planning stages before the incident, but it definitely added another level of urgency to his project.

“Jordan Klepper Solves Guns” also serves as a testing ground for Klepper and the viewer. It was recently announced that Klepper will helm his own late-night series to be paired with “The Daily Show” this fall in the slot once occupied by “The Nightly Show with Larry Wilmore” and “The Colbert Report.”

A number of “Nightly Show” boosters are fuming at the knowledge that the gap left by the cancellation of Wilmore’s series, a show that found comedic ways of parsing race relations and social issues, will be filled by the only guy on “The Daily Show” squad who would make a stupendous mascot for Wonder Bread or the missionary position. It's true, Klepper physically resembles three of the five nightly hosts who came before him, not to mention nearly every other late-night host who isn't Samantha Bee. (And it also makes me wonder whether Franchesca Ramsey or Jessica Williams received an offer for their own hour-long specials, since both have projects in the works for the channel.)

Regardless of how someone feels about Klepper, Sunday’s special grants the soon-to-be host a chance to discover his strengths and areas of improvement as a headliner before being thrust into the day-to-day grind. That has value.

It also provides viewers with an idea of how much of Klepper’s benignant character is bearable. An hour feels like a bit much. A half hour of his own design should work just great. That much, we can piece together.