Untangling the Qatar kerfuffle: Sure, the tiny Gulf state is a lousy ally — but so is everyone else in the region

Why does everyone in the Arab world suddenly hate Qatar? Is it a uniquely repressive and terrible nation? Um, no 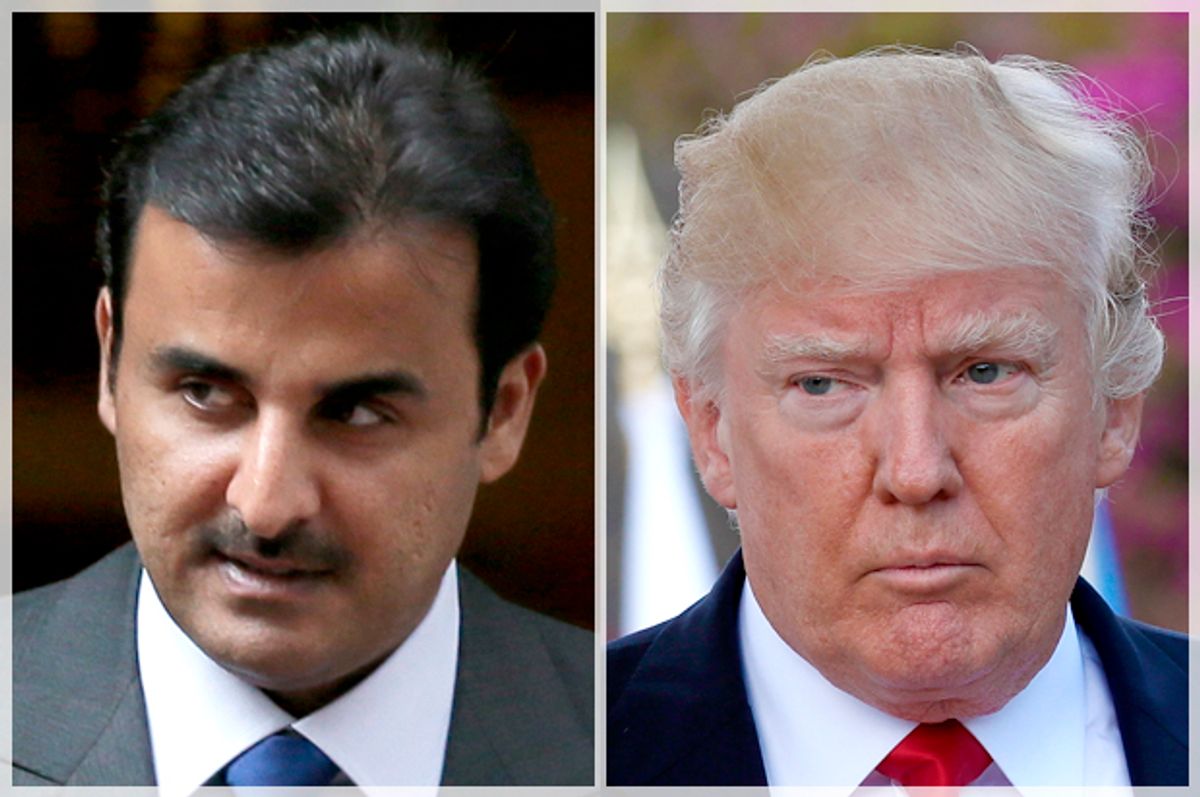 Egypt’s former foreign minister, Nabil Fahmy, who also served as his country’s ambassador to the United States from 1999 until 2008, once quipped that the U.S.-Egyptian relationship was like a “mature marriage.” This was during a particularly troublesome moment when the George W. Bush administration was squabbling with then-President Hosni Mubarak over political reform. The bickering between Washington and Cairo was hard not to notice at times, but there was no breakup.

Alliances are, like a lot of successful marriages, hard work. Even the best of them go through periods of tension. The “special relationship” between the U.S. and the United Kingdom has often seemed less than that, for instance. The French can be so infuriating that former President Bill Clinton reportedly dreaded dealing with his then-counterpart, Jacques Chirac. It sometimes seems that the prime directive of Canada’s foreign policy is to portray itself as the anti-America — righteous in the world, in contrast to the brutish gunslingers to their south. In 2016, 23 of the 28 NATO members were not spending the agreed-upon 2 percent of their national GDP on defense, free riding on the security that American taxpayers were providing.

All of that is irritating to American policymakers, but it is also true that the British have gone to war along with the United States when no one else would; the French are among the best, if not the best, counterterrorism partners Washington has; the Canadians may be self-righteous but they consistently align their foreign policy with the United States; and NATO is an indispensable force multiplier for the U.S. military.

The Middle East, however, is much different. There the United States boasts a group of allies that are a consistent source of frustration and trouble. On the one hand, it is true that Egypt, Saudi Arabia, Morocco, Jordan, the United Arab Emirates, Bahrain, Oman, Turkey, Israel and Qatar have made it easier and less expensive for the United States to pursue its interests in the Middle East. Washington’s ties with these countries include intelligence and security cooperation, logistical support for American forces, diplomatic coordination and military basing. That’s a lot of help, but it comes at the cost of wrangling countries that are neither knit together through shared values nor interests.

The latest trouble came last week, with a Saudi- and Emirati-led effort to isolate Qatar for a variety of transgressions relating to the Muslim Brotherhood, Hamas, Iran and the financing of terrorism. The move, which began when five Arab countries severed diplomatic relations with Doha, pits American allies against American allies. Turkey, for example, has vowed to support Qatar, defying the anti-Qatar coalition. In recent years the two countries have developed an ideological affinity that has in turn spurred military and commercial ties between Ankara and Doha. It is shaping up to be the kind of mess that can derail President Donald Trump’s vision of a united region working to defeat terrorist groups and roll back Iranian influence.

Such is the nature of the Middle East that while it is entirely true that the Qataris are difficult partners and pursue unsavory policies, that does not make them all that different from any of Washington’s other Middle Eastern allies. All of these countries have questionable records on human rights, and some have distinguished themselves as incubators of extremism. People who live in glass houses should not throw stones, except that’s exactly what happens in the Middle East.

Consider Washington’s most stalwart allies in the region. Saudi Arabia has been driven to sanction Qatar in part for the Qatari leadership’s support for the Muslim Brotherhood and its Palestinian spinoff, Hamas. That’s good news, but the Saudis have never been held to account for running telethons in 2002 to support the families of Hamas suicide bombers during the second intifada. One could, if one were so inclined, argue that these families were in need of help. But holding fundraisers as bits of Israelis were being picked off the carcasses of blown-out city buses was not only in very poor taste, it encouraged the spilling of more civilian blood.

That story is old news, though. There is a Saudi-Israeli alliance of sorts these days, in response to the shared threat of Iran. That may be so, but what of Saudi Arabia’s human rights record? Next to China and Iran, Saudi Arabia put more people to death in 2016 than any other country in the world. There are a lot of Saudi women entering the work force, but they still cannot travel without the permission of their husbands or fathers and not without a male escort.

Lest anyone forget, it bears repeating that Abdulaziz al-Omari, Wail al-Shehri, Waleed al-Shehri, Satam al-Suqami, Mohand al-Shehri, Hamza al-Ghamdi, Saeed al-Ghamdi, Ahmed al-Ghamdi, Hani Hanjour, Khalid al-Mihdhar, Majid Moqed, Nawaf al-Hazmi, Salem al-Hamzi, Ahmed al-Haznawi and Ahmad al-Nami — that is, 15 of the 9/11 hijackers -- were all Saudi nationals. For obvious reasons, the government of Saudi Arabia would prefer it if people forgot this fact. Few Americans have, and it was only the cynicism of the Trump administration (and that of its predecessors) that left it unmentioned during presidential visits to Riyadh.

Another important American ally in the region is Turkey — a NATO member and a candidate to join the European Union. Over the last six years, the Turks have enabled the growth of extremism in Syria, coordinating with the al-Qaida-affiliated Jabhat al-Nusra, which has since rebranded itself as Hay’at Tahrir al-Sham. One of its state-owned banks was involved in busting international sanctions on Iran, a country from which Turkey purchases 16 percent of its natural gas. Turkey is among the leading jailers of journalists in the world and since a failed coup 11 months ago the government in Ankara has undertaken a wide-ranging crackdown that cost more than 200,000 people their jobs or their freedom.

Recently, the ruling Justice and Development Party oversaw a flawed referendum that will give President Recep Tayyip Erdogan vast powers while simultaneously weakening checks and balances on the Turkish executive. When President Barack Obama went looking for allies in the fight against the self-declared Islamic State in 2014, the Turks demurred and forced the United States to negotiate for a year before allowing American and allied air crews to conduct operations against Abu Bakr al-Baghdadi’s forces from Incirlik airbase. At that same facility, the United States stores 90 nuclear weapons as a symbol of American commitment to Turkish security.

Then there is Israel, the country with which the United States has an “unbreakable bond.” There are important political, strategic and moral reasons for those ties. Israel’s record is no doubt less sordid than other American allies in the region, but that low bar hardly excuses bad Israeli behavior. Just last week, the world remembered how 50 years ago Israel defeated the combined arms of Egypt, Syria and Jordan in just six days. In those five decades, however, the Israeli government has encouraged the construction of Jewish towns and cities in land conquered in that conflict. The Israelis withdrew from the Gaza Strip (from which they take regular rocket fire) in 2005, though they maintain a sea, air and land security cordon around it. In the West Bank, there are anywhere from 300,000 to 400,000 settlers among 2.6 million Palestinians, who are stateless and often subject to the brutality of Israel's military and the settlers.

Israel’s leaders proclaim they want peace but have nevertheless conspired to undermine American policy, which supports the establishment of a Palestinian state living side by side with Israel, in peace. Obviously, the Israelis are not solely to blame for their stalemate with the Palestinians, who have copious amounts of blood on their hands. That said, ministers in the Israeli government are not shy about their support for the annexation of the West Bank.

Finally we come to Egypt, a recipient of about $80 billion in American military and economic assistance since the early 1980s, which has long been held out as a source of stability in the Middle East. But is it really? Until the United States killed most of them after the 9/11 attacks, the all-stars of transnational terrorism were mostly Egyptian. In some ways, al-Qaida’s origins are more Egyptian than Saudi, even when accounting for the leadership of Osama bin Laden and the nationality of 15 of the 9/11 hijackers. The group’s current leader is Ayman al-Zawahiri, an Egyptian physician from greater Cairo.

Since 2013, tens of thousands of Egyptians have been jailed for membership in the Muslim Brotherhood or for opposition to President Abdel Fattah al-Sisi, who first came to power in a coup d’état in July of that year. This has also been a particularly bloody moment in Egyptian history, starting in August 2013 with the killing of about 800 supporters of the deposed Muslim Brotherhood president, Mohammed Morsi. Like Turkey, Egypt is among the top jailers of journalists in the world. Regionally, the Egyptians have aligned themselves with the Russians in the conflict in Syria and support Gen. Khalifa Haftar in Libya, both positions that contravene U.S. policy.

Given this record, it is hard to make the case that the Qataris are uniquely problematic. In ways, they have been more helpful to the United States than others. The Al Udeid air base, outside Doha, is one of the largest U.S. bases in the world and the place from which U.S. Central Command ran the wars in Iraq and Afghanistan and currently runs the campaign against the Islamic State. The base became more important to U.S. war planners in 2003, when the Saudis demanded the withdrawal of American military personnel.

No doubt the Qataris have undeniably poor judgment when it comes to their support for the Muslim Brotherhood and especially Hamas, which runs against U.S. interests -- although with some deft diplomacy that relationship might have been used to help save Israeli and Palestinian lives. Al Jazeera is pretty terrible -- but then, so is Fox News. The Qataris regard Iran as a problem to be managed rather than rolled back. That is likely a misjudgment, given how emboldened Iranian leaders are in their effort to reinforce and extend their influence around the region. Still, a lack of judgment is hardly unique in the contemporary Middle East. It seems that Qatar’s real crime, then, is to resist the regional consensus forged by Saudi Arabia, the United Arab Emirates, Israel and the United States under Trump.