What Mr. Bean teaches us about the American museum patron

It's easy to put together a blockbuster Impressionist exhibit. It's much harder to get Americans to go beyond that 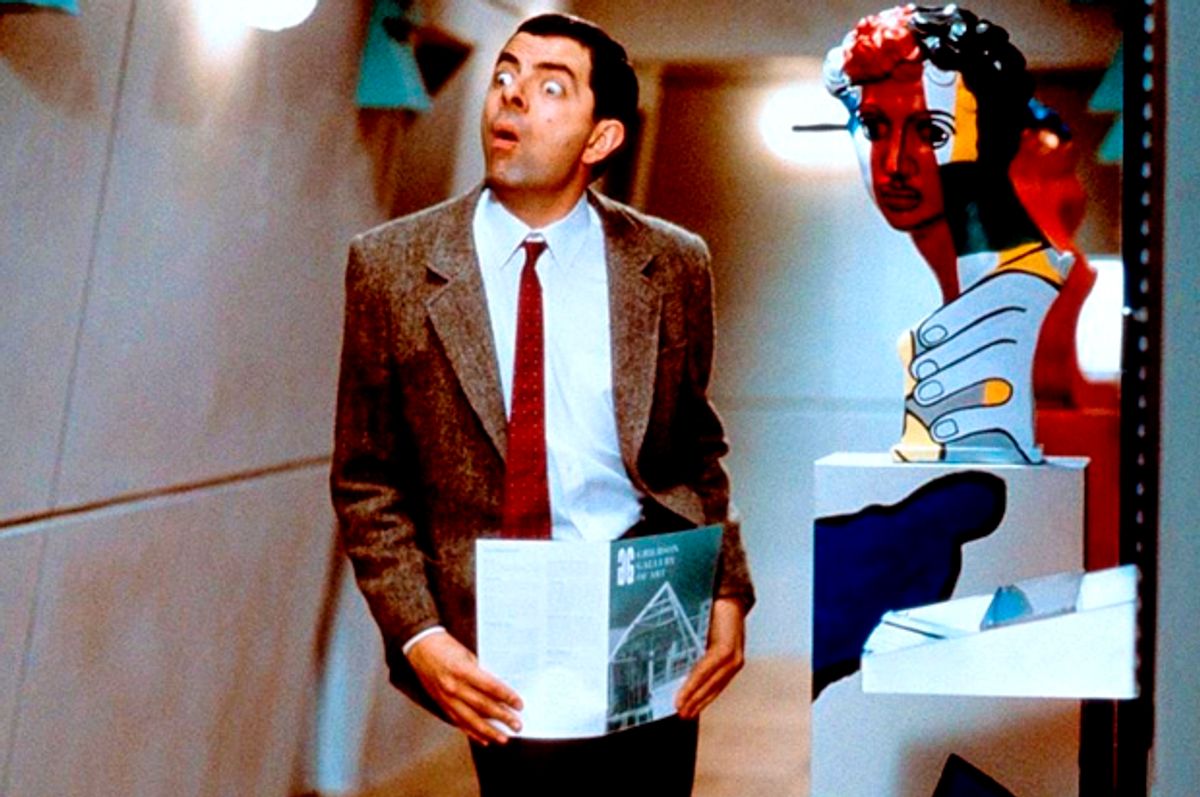 If the movie "Bean" has taught us anything (and what hasn’t it taught us really?), it’s that American museums and the museumgoing public will line up, go out of its way, to view something spectacular, whether there's much in the way of educational value. In that film, Rowan Atkinson’s bumbling museum guard is mistaken for a famous Whistler scholar and left alone with the wildly expensive, high-visibility artwork that is the focal point of a garish, nouveau riche museum: Whistler’s "Portrait of the Artist’s Mother." The results, involving inadvisable sneezing and subsequent amateur conservation attempts, are funny, but the movie is biting and right on the money — smarter than it looks.

We want spectacle. We want to see an artwork, even just one focal work, that has been hyped, that we’ve heard about, that dazzles. While a small, passionate percentage of museum visitors are there to learn and will plunge deeply and broadly into a collection, most aim for the “big guns.” They want to say that they saw Whistler’s mother or the Mona Lisa, maybe grab a quick selfie in front of it (if the museum guards are looking the other way and they remember to turn off the flash) and then head for the cafeteria.

To be fair, although I’m a professor of art history, I’m a bit like this, too. I’d rather travel on an art historical pilgrimage to Volterra, Italy, to see Rosso Fiorentino’s "Deposition" or an excursion beyond the center of Dijon, France, into the psychiatric hospital to admire Claus Sluter’s "Well of Moses" than spend hours in a museum seeing dozens of works that I may not remember. It requires a different, more leisurely mindset to wander without a primary target, to give yourself the breathing room to read all the wall copy and hand yourself over to the well-meaning curators.

Americans in particular — although I’ve noticed this with foreign audiences, too — tend to treat seeing art like attending Shakespeare plays. First off, let it be said that such a small percentage of the general public goes to museums or Shakespeare plays, that we must doff our hats to them for making the effort. But there are many theatergoers who see "Hamlet" in order to wait for the lines they already know and will recognize (“To be or not to be! Woo hoo!”). I know I’ve done that. And so it is with museums. Head to the Louvre to see that Leonardo. All those other paintings, not to mention the little pop-up exhibit of Tiepolo drawings or what have you, usually get short shrift. American museumgoers are not as interested in an enlightening, didactic exhibition with important, if not particularly visually striking or much-hyped objects, on display for which they really need to read all the wall copy, use the audio guide and perhaps even buy the thick catalog in order to get the most out of the carefully curated, years-in-the-making exhibition.

So what do you as a curator do when the material in your collection is more interesting than spectacular? To find out, I spoke to several prominent names in the field.

One of them is Brent Glass, until recently the director of the Smithsonian Museum of American History. I interviewed him at an American embassy event in Ljubljana, Slovenia, when he explained that it's curatorially easy to have a blockbuster of Impressionist paintings or to stick a Vermeer on the wall and draw the crowds. But curators must get creative with how they present, if what they present, in plastic terms, may not excite. At his Smithsonian Museum, Glass is particularly fond of the exhibit of a section of the Greensboro, North Carolina, Woolworth’s diner in which a sit-in was held on February 1, 1960, by black college students who bravely sat down in the “whites only” section. An entire slice of that diner, counter and stools and all, was transported and erected inside the museum, acting as the set piece, the real-life scenography, for one of the more dramatic moments in civil rights history.

I also spoke to Christian Cotz, the director of education and visitor engagement at Montpelier, the former home of President James Madison that has just launched a new exhibit titled "The Mere Distinction of Colour." Without a “big gun” object as a draw, visitors must be shepherded through a narrative, augmented by objects and by the feel of the place, in order to gain a sort of negative-space picture of the man who is virtually on display.

“At Montpelier, we celebrate American exceptionalism through Madison by talking about him as a champion of religious liberty, as the man who conceived our constitutional form of government, as a President who never abused executive power, and as an intellectual who believed that civilized discourse and deliberation amongst statesmen would create intentional and progressive change in society and government," Cotz said.

Using objects and text to create a character study and tell an important story, minus the flash, is more like the museum equivalent of literary fiction, as opposed to the “beach read” thrillers that appeal to the widest public. With that in mind, it’s a good tactic to pick a hot topic — one that can show triumph in the face of adversity.

“In 'The Mere Distinction of Colour,' our mission is to continue telling the story of human freedom by illuminating its struggle," Cotz explained. "The full and true promise of human freedom cannot be achieved until we talk openly about slavery and why it still matters, so we set out to showcase the reality and humanity of Madison’s slaves and their descendants.” His favorite object on display is a clay pipe with the word “liberty” inscribed upon it. It was found in an enslaved person's quarters.

Technology can add flash, too. On a recent visit to the Museo Civico in Sansepolcro, Italy, tourists crowded around a giant touchscreen that allowed them to zoom into a large altarpiece by Piero della Francesca, and also to see it using X-ray, ultraviolet or infrared light. This seemed to be more exciting than the actual altarpiece that hung on the wall opposite them. You don’t want someone to leave an exhibit with admiration for the mechanics of the presentation, while not recalling much of what was presented. That said, Cotz is employing some clever contemporizing elements to the Madison exhibit to ensure that folks don’t associate slavery with the distant past.

“Located on three surrounding flat-screens in a smokehouse, man-on-the-street interviewees describe their notions of slavery in short smartphone-style videos while imagery of slavery, from ancient Egypt to modern sex-trafficking, are juxtaposed with the speaker,” he said.

There’s a risk, however, that our touchscreen, video clip-mad contemporary society, with its ever-shrinking attention spans and preference for digital over analog, will gravitate away from the actual objects and toward their virtual equivalents, which would be a great shame. The one must complement the other, not override it.

Contemporary culture seeks spectacle, the fulfillment of anticipation, seeing something you’ll recognize “as seen on TV,” which is a part of our celebrity culture. This is the same sensation if we recognize a line in Shakespeare, spot a movie star (I said hello to Bill Murray this week, who happened to pop up in Ljubljana, while I was filming a TV program there; everyone has or wants a pop-up Bill Murray story) or see an iconic painting in a museum. Spectacle for spectacle’s sake, to check off a box on your must-see list, is OK if it brings folks to culture when they might not otherwise engage. But often the most important, useful, interesting exhibits are those that require a more advanced level of engagement. All those months that curators spent securing item loans, writing didactic wall copy and filling out carefully cited catalogs offer a great deal more than the flash of recognition at seeing a famous object.

Next time you’re at the Louvre, try a different approach. “I hear you’ve got the Mona Lisa. That’s cool. But what else have you got?”