Under a clinical-sounding label, the shame-and-ignorance approach of the Bush era makes a comeback under Trump 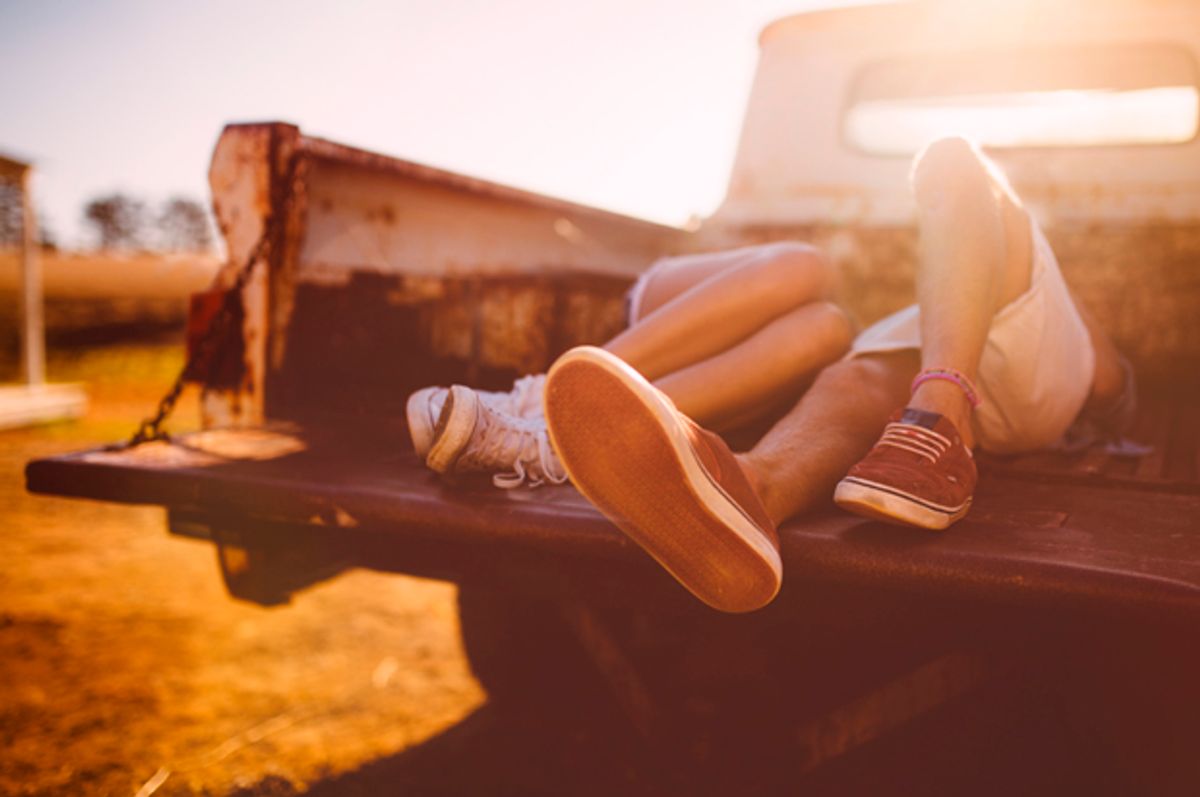 Thrice-married libertine Donald Trump got himself elected president by rallying the religious right vote behind him. The devil's bargain that Christian conservatives made with Trump is easy enough to understand: They ignore his history of sexual incontinence, including rumors of a literal "pee tape," and he gives them more power over the sex lives of private individuals, especially young people and women. In office, President Trump has done just that, launching a multitude of attacks on legal abortion and contraception access.

Now it seems as if a third front is opening in the Trumpian war on other people's sex lives: The return of abstinence-only education, which many Americans believe had died off after President George W. Bush left office. Well, abstinence-only ed is coming back, but this time around, its proponents hope that voters, especially parents, don't notice the return to the classroom of religious anti-sex propaganda.

The first sign that the Trump administration hoped to ease into the classroom more just-say-no-to-sex messages came in late May, when the White House proposed a budget that would slash nearly every government expenditure but would increase by $277 million spending on abstinence-until-marriage programs. Last week news surfaced that Valerie Huber, the head of a pro-abstinence organization called Ascend, will join the Department of Health and Human Services as chief of staff to the assistant secretary for adolescent health; the position will allow her to push for more support for abstinence-until-marriage programs in schools.

To be clear, abstinence-only ed was never completely dead. The Obama administration mounted many efforts to get rid of federal funding for abstinence-focused programs, and some were successful. But congressional Republicans managed to preserve at least some abstinence-centered funding, and since sex education curricula are mostly controlled by local school boards, abstinence programs have continued to flourish in many school districts. Religious conservatives have continued to push them onto schools under the noses of parents who might otherwise revolt at hearing that their kids are being subject to programs that shame the 95 percent of Americans who have premarital sex and that have repeatedly been linked to higher rates of teen pregnancy.

Part of what kept abstinence-only approaches alive is that the religious right has rebranded it as "sexual risk avoidance," as if it were a public health initiative instead of religion-tinged sexual shaming.

“Over the years they got very smart," explained Debra Hauser, the president of Advocates for Youth, in a phone conversation. "When we were like, ‘science over ideology,’ they turned around and produced their own journals and their own science."

She added, "When we said, ‘This is a just-say-no program that didn’t work for drugs under Nancy Reagan and isn’t gonna work here,’ they said, ‘No, this isn’t abstinence until marriage; it just stresses abstinence.’ They turned around and went to this language about 'sexual risk avoidance,' which completely obfuscates what they’re actually doing.”

With Huber's appointment, this rebranding and Republican control of all three branches of government, there's good reason to fear a renewed push for schools to terrorize kids about sex, rather than providing true sex education.

Mary Anne Mosack, who replaced Valerie Huber as the head of Ascend (formerly called the National Abstinence Education Association), took issue during a phone interview with the implication that "sexual risk avoidance" is the just-say-no style of education that critics like Hauser say it is.

“We teach that [marriage] is the best context for sexual activity," Mosack said, repeatedly insisting that this doesn't mean that her organization's approach is an abstinence-until-marriage program.

My conversation with Mosack, which lasted nearly a half hour, was maddeningly elliptical about what exactly the goals of the program are. I repeatedly pointed out that the average U.S. age of first marriage is 28 years old — a full 11 years after the average age for first having sexual intercourse — and asked if it's unrealistic, and quite possibly unhealthy, to expect young people to wait that long to have sex. Mosack sidestepped the question, trying to redirect the conversation away from younger adults to teenagers. She said Ascend's main goal was to "normalize . . .  sexual delay" for teenagers, adding, "We’re talking about middle school and high school."

But when I then asked her if the point of the programs was to have younger people wait until, say, college before engaging in sexual activity, she said that, no, Ascend believes that virginity until marriage is the "best outcome." And then around we went again.

Mosack's position, if I'm being generous, seemed to be that if you tell young people to wait 15 years, maybe you can hope they wait five years — or three. To me that sounds less like education and more like setting up kids for failure. It certainly didn't seem like a good way to frame human sexuality, which should ultimately be about pleasure and human connection, not described in terms that strongly resemble the Christian idea of sin. And it also doesn't seem like a good way to impart health information that young people will need when they do inevitably start having sex.

“Make no mistake, there is still an underlying theme of shame, fear and the use of traditional gender stereotypes and roles" in these rebranded programs, Hauser said.

Mosack disagreed with Hauser's position, insisting that the programs take a "holistic approach" to sex education.

I asked Mosack for some examples of curricula that her organization endorses, so I could see it for myself. At this point she got cagey. While her organization has certified hundreds of programs, she said, she wouldn't give me any names or contact information, instead she said would pass my number along so that representatives of those programs could contact me. (No one has.)

It didn't take much digging, however, to find a 2016 Ascend document that featured an extensive list of programs the organization had deemed successful "sexual risk avoidance" examples; many of the programs continue to use the "abstinence" language in their titles.

It just so happens that many of the Ascend-recommended programs were reviewed in 2016 by the Texas Freedom Network, which advocates for the separation of church and state and resists religion-tinged and anti-sex propaganda being pushed as "education" in schools.

Texas Freedom Network found that reframing abstinence-only programs as "sexual risk avoidance" led to a few minor improvements over the Bush-era programs. The amount of outright misinformation about contraception has declined and the programs have thankfully started to incorporate important information about consent. But the review still found that the programs demonize contraception. Much of the shaming and sexist messaging that gave abstinence-only education a bad name in the first place is still a major feature of the programs.

For instance, two Ascend-recommended programs — REAL Essentials and Choosing the Best — continue to teach that having sex makes a person dirty and incapable of falling in love.

"REAL Essentials explains that glue (i.e., sex) is a bonding agent that works best on a surface that is 'clean and dry' (i.e., virgins)," the Texas Freedom Network report read. "Choosing the Best includes a similar exercise using adhesive tape. The exercise involves placing tape on a student’s skin, then removing it to show what has transferred from the skin to the tape. What remains on the tape is supposed to represent the emotional baggage resulting from sex."

The idea of the exercise, of course, is to suggest that people who have sex become dirty and incapable of "sticking" to new partners.

The reviewers also found sexist stereotypes in Ascend-recommended programs like Scott and White Wellness and Sexual Health (formerly called Worth the Wait) and REAL Essentials. Their curricula framed men as sexual and women as romantic, treating marriage as a tense exchange whereby a woman provides access to her body in exchange for a man's pledge of love.

In reality, of course, people of all genders experience both sexual desire and romantic yearnings — and the two are not experienced in opposition, for most people.

That doesn't mean parents are powerless in this regard. In fact, Hauser argued, fighting for real sex education is a good avenue for people looking for opportunities to resist the Trump agenda.

“At the school-district level is where sex education is determined, both in policy and in practice," Hauser explained. That means that as few as five or six parents, can often be enough to convince a superintendent to reject federal pressure or funding to replace real sex education with abstinence-only, she said.

The kids themselves can be the resistance's best ally. They can be warned that schools may bring in activists from crisis pregnancy centers and other religious right organizations. Or students can cautioned to be on the lookout for anti-sex lectures that feature things like the tape stunt or similar ones involving chewing gum or cups of spit. The list of Ascend-approved curricula can serve as a cheat sheet for parents: If your kid comes home with abstinence-only books, it's time to call the school and raise hell.