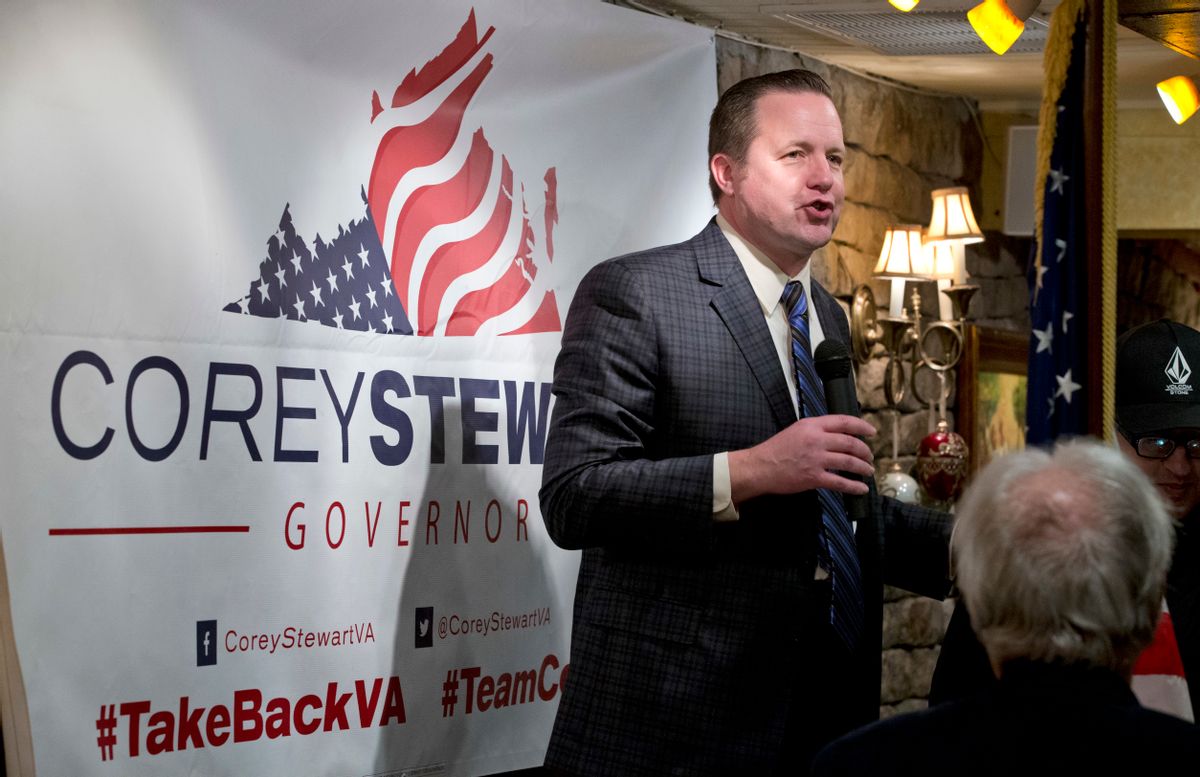 FILE - In this Monday, Jan. 23, 2017 file photo, Republican candidate for governor of Virginia, Corey Stewart, speaks at a campaign kickoff rally in a restaurant in Occoquan, Va. Stewart, a tough-talking former Donald Trump campaign chairman who says the president’s victory has freed candidates to "simply be yourself." (AP Photo/Steve Helber, File) (AP)
--

Virginia gubernatorial candidate Corey Stewart has pretty much been willing to embrace anything in his race against the more widely known Ed Gillespie.

After essentially building his Republican primary campaign around trying to preserve memorials to the Confederacy, Stewart has latched onto another controversy in an attempt to get votes. He's cut a campaign ad featuring the fake bloodied head of President Donald Trump that landed comedian Kathy Griffin in a load of trouble last week.

"Donald Trump is the president and unhinged liberals can't handle it," the 30-second spot begins.

"Who will stop them? Ed Gillespie won't," the female narrator intones as a photograph of Gillespie pops up on the screen amid various criticisms.

Stewart's campaign received some pushback from NBC12, a Washington, DC-area television station when his campaign submitted the ad to air.

"We can’t air the Stewart spot,” the station's sales manager emailed the campaign, according to the Washington Post. “We feel that the spot is not appropriate to air due to the image of President Trump’s bloodied face. Even if it’s blurred we don’t feel it’s appropriate to air. Do you have another spot?”

NBC12 relented to air the spot after it was informed that Stewart had personally approved the message.

Most public opinion surveys have shown Stewart far removed from the first-place spot on the GOP side but a new poll from an untested outfit calling itself Change Research has him ahead of Gillespie 42 to 41 percent, with the caveat that people who are undecided in the primary are leaning heavily toward voting for Gillespie.

In a last-minute bid to try and soften his hard-right image somewhat, Stewart denounced the many racist and white nationalist groups who have seized upon the Confederate memorial issue. Opponents of the memorials and Stewart's GOP rivals have called on him for weeks to do so but he refused until last Friday.

Voters are set to head to the poll in the Commonwealth on Tuesday.