Texas patriots rally to defend a statue of Sam Houston in Hermann Park. Problem? No one wants to tear it down 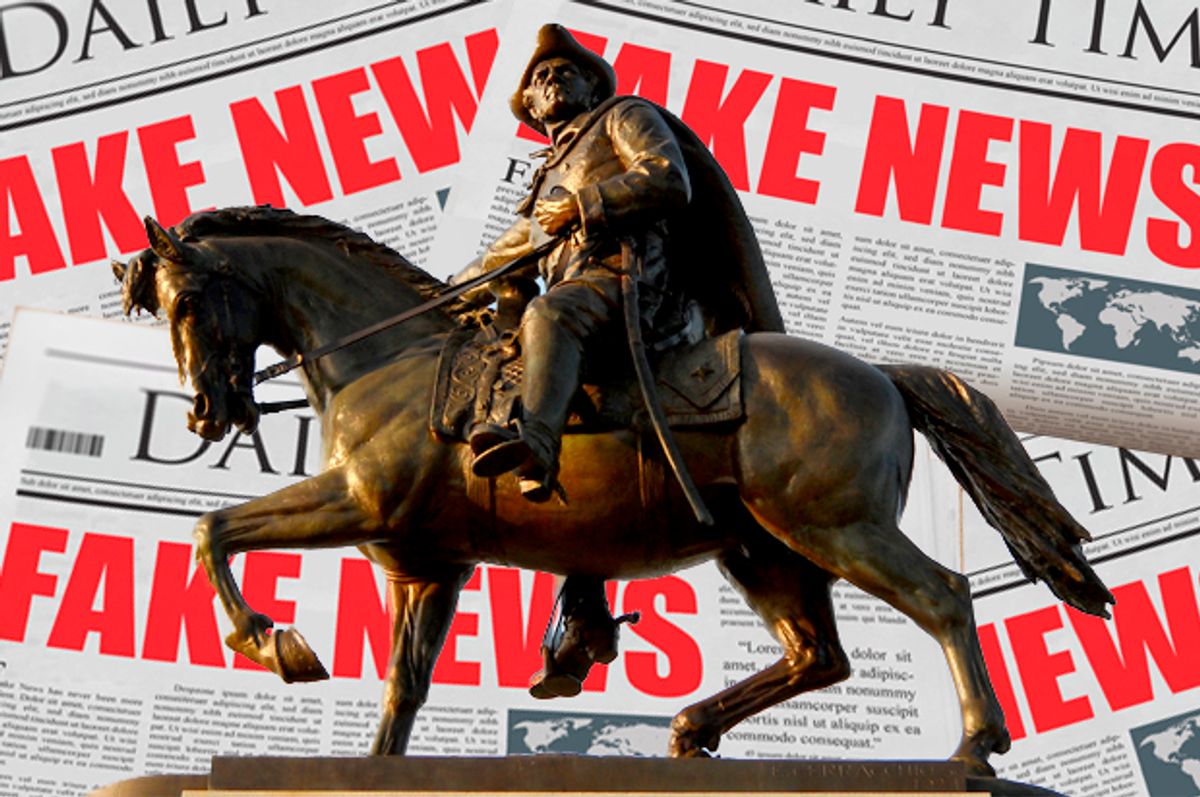 Things took a strange turn over the weekend in the battle over the future of various monuments to the treacherous, slave-owning Confederacy. Hundreds of people, many of them carrying Confederate flags, turned out to Hermann Park in Houston on Saturday to protest efforts to tear down the park's monument to Sam Houston, a former governor of Texas and a general in the Texas Revolution.

"Antifa has come out saying they will be bringing several large (communist) groups together to host a rally around the Museum District in Houston, Texas on June 10, 2017," read a post at the Facebook page for the right-wing This Is Texas group. "This list includes Black Panther Party, Antifa & more."

The problem? There were no efforts to tear down the statue of Houston. This was a hoax. It appears that an alt-right hoaxer pretended to be a leftist online to perpetuate a fake news story claiming that a group of left-leaning activists were going to arrive at the park to demand that the statue of Houston be torn down.

That it was a hoax should have been obvious from the event page at This Is Texas, which alleges that leftists were making threats like, "Texans better not show up or they will limp home bruised, broken, hurt, with their tail between their legs." There's absolutely no way a Texas-based leftist organization would share the This Is Texas assumption that the category "Texans" refers exclusively to white, conservative fans of Confederate monuments.

Watching a bunch of gun-toting wannabe tough guys skulk around Hermann Park, angry about nonexistent threats to a statue most of them have never really thought about before, presents a grand opportunity for liberal mockery. Beyond that, this entire story offers an excellent illustration of why exactly fake news is so appealing — and why right-wingers are willing to stand by blatantly false stories even when it gives their liberal opponents an opportunity to mock them for being stupid and gullible.

At the moment, it seems that the folks behind the pro-statute protest are unwilling to admit that they were taken in by a hoax. On the Facebook page for This Is Texas, right-wing activists are denying that it was a hoax and spreading rumors that antifa protesters were spotted in a bathroom. Many of the right-wing protesters are suggesting that "antifa" protesters were planning to arrive but then were scared off by the right-wingers with their guns and Confederate flags.

The level of defensiveness on display makes it clear that the right-wing protesters aren't particularly happy with being laughed at. So why bother going to the rally, amid a swirl of rumors that it's a hoax? And why on Earth would anyone continue defending it after the fact, knowing that doing so just means inviting such painful mockery?

The grim answer is that it's better than the alternative — right-wing protesters' having to admit that they just wanted to hold a white nationalist rally and were willing to seize any opportunity to do so, no matter how threadbare.

The pro-Sam Houston protesters openly linked their event to efforts across the country to protect monuments to the Confederacy, activities defended on the grounds of "history" and "heritage." (This Is Texas' event page claims, "Many of these communist punks are embolden [sic] after they lay claim to a win in New Orleans by bringing down the Confederate monuments.") But what the stalwart defenders of Texas' Confederate heritage don't seem to grasp is that Sam Houston flatly opposed Texas' joining the Confederacy and was ousted from the governor's office for his resistance.

Yet while Houston opposed the Confederacy, he was a slave owner and that fact was cited by the online hoaxer as the reason imaginary antifa protesters wanted to take down the statue.

None of this has anything to do with Sam Houston or his legacy, except maybe the part where he owned slaves. It was all clearly just a pretext for a bunch of backward-looking white nationalist types to hold a rally. Which kind of puts protesters in a pickle. To admit that the story about antifas attacking the statue was a hoax is to admit that they were just using the Houston statue as a pretext. Rather than admit that, they would prefer to flail around like fools, denying that this was a hoax or that it even matters whether the original story was true.

President Donald Trump may have made open racism slightly more acceptable than it used to be, but it would still be politically toxic to hold an event titled "Rally to Celebrate Slave Owners." So instead, it's a rally to defend from an attack — that's entirely a figment of the imagination — a statue representing something vague about heritage and history. Being laughed at for this folly is no fun for these people, but it may still be better than being universally viewed as a bunch of racists.