Donald Trump in Wonderland: Literally everything our president says and does reflects the opposite of reality 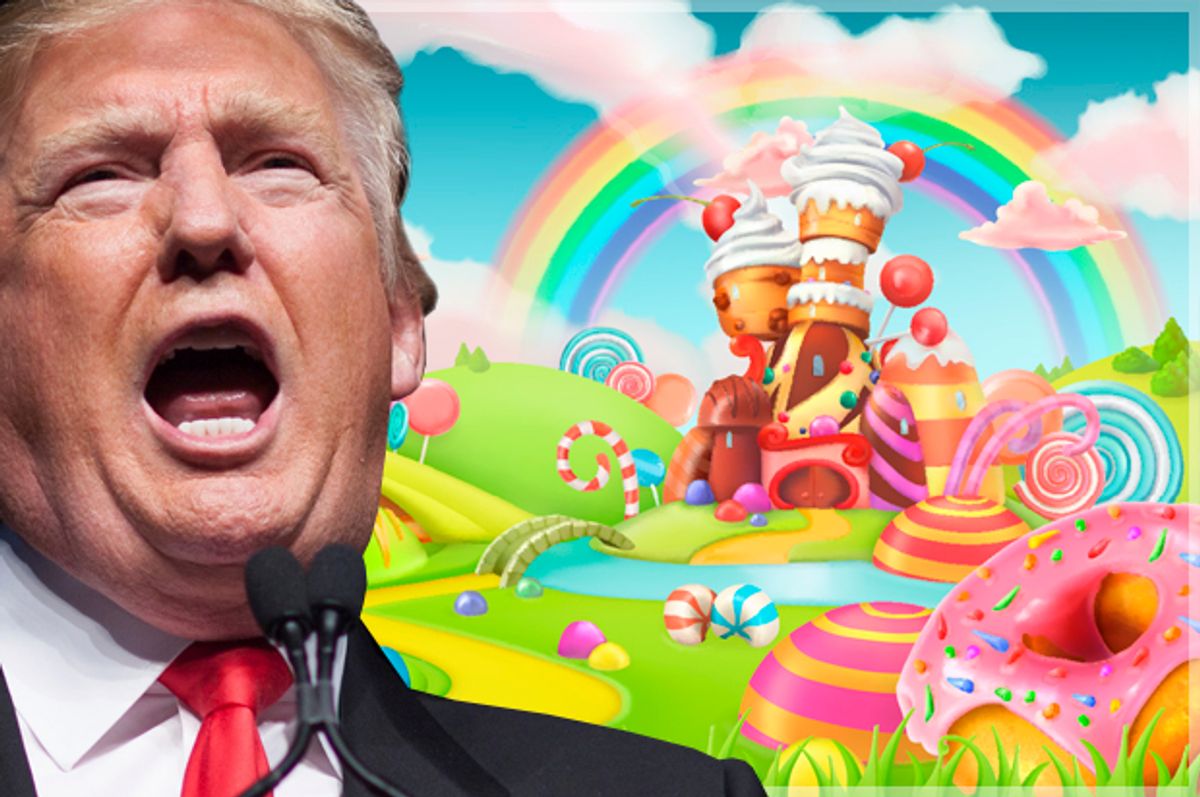 Early on Monday a colleague of mine messaged me with a link to a Politico article detailing how Russian intelligence has allegedly gathered “kompromat” on about 2,300 well-known American media personalities and politicians, apparently in conjunction with Vladimir Putin’s ongoing effort to subvert American democracy.

My political writer friend added, “This is scary. What do you think will happen?”

“Nothing,” I wrote back. “Not as long as Trump insists this is nothing more than a scam by the Democrats because Hillary lost.”

We can’t repeat this enough: The United States and our democratic institutions were attacked by a hostile foreign power, yet President Donald Trump refuses to do a damn thing about it. Not only is he still infuriatingly chummy with the Russians, gifting them (without reciprocation) classified intelligence inside the Oval Office and reopening housing compounds that serve as bases for Russian spies. He won’t even acknowledge as legitimate the very basic nut of the story, that Russia hacked the 2015-16 election cycle. Never mind the question of possible collusion for now. The Russians attacked us and there’s copious evidence to prove it.

Imagine if, in the wake of 9/11, the George W. Bush White House had refused to accept that the attack even occurred. The entire world would have thought Bush had lost his mind or that our entire nation was caught in the grip of mass delusion.

Either way, Trump is behaving as if a series of ongoing events that were palpably real weren't so at all. Those of us who have followed Trump’s ridiculousness since the 1980s know that he’s perpetually full of crap. For example, you may recall his yarn: “Trump Steaks are the world’s greatest steaks and I mean that in every sense of the word.” But as a presidential candidate, and subsequently as the country's chief executive, his world of make believe is unparalleled. Everything orbiting in Trump’s universe — a universe that includes his 62 million voters along with Fox News — is a fantasy.

Trump held a Cabinet meeting on Monday morning where he asked his department-level secretaries to offer allegedly unsolicited praise for him and to express effusive gratitude for the honor of serving Trump personally. The usually stoic CNBC reporter John Harwood described the meeting by saying, “Honestly this is like a scene from the Third World.” Indeed. Vice President Mike Pence said serving Trump was “the great honor of [his] life.” (Pence has three children, by the way, whose births must be way down on the list of honors.) Chief of staff Reince Priebus, who’s fighting for his job, said, "Thank you for the blessing you've given us." Yes, I’m sure it’s quite a blessing to be in charge of scooping the rhetorical feces from the cage of a clownish supervillain who needed four tries to correctly spell “hereby.”

The Cabinet’s gooey, over-the-top praise was cloying and artificial, but in Trump’s world of make believe the president and his disciples were sufficiently fluffed, injecting every word of the Cabinet’s Eddie Haskell-ish ass kissing into the news cycle. Insofar as perception is reality, we can assume it worked on the faithful. If all these serious people think Trump is the greatest president God ever created, then it must be true!

Likewise, Trump expects everyone to believe there might be tapes of his one-on-one meetings with former FBI Director James Comey. Knowing Trump and the mendacity of his online blurtings, it’s safe to say there aren’t any tapes even though (to coin a phrase), “Lordy, I hope there are tapes.” If the tapes exist, he’d release them. But releasing the tapes is irrelevant because as long as his base believes Comey is what Trump claimed — a crazy, cowardly grandstander who’s obviously lying about the meetings -- then pretending that such tapes might exist is enough for the voters who matter.

Contrary to Trump’s world of make believe, there weren’t 3 million illegal Hillary Clinton voters, nor did former President Barack Obama have Trump’s “wires tapped.” The tax reform bill Trump says is being negotiated doesn’t actually exist. The American Health Care Act (also known as “Trumpcare”) will not provide health insurance to more people and will ultimately leave tens of millions of people with no coverage, among other terrible things. His tweets about the “travel ban” won’t help his chances in court and only make matters worse for the future of his executive order.

Meanwhile, Trump praised his record on jobs so far: While 1.1 million new jobs have been created since Election Day, 1.3 million jobs were created during the previous seven months during former President Barack Obama's administration. (Trump has also forgotten about the supposedly "real" unemployment rate he mentioned so often during the campaign.) Trump insists the Democrats are feckless, rudderless failures who can’t get anything done yet they’re also effectively obstructing his entire agenda despite the fact that the GOP controls everything. And sorry, James Comey is telling the truth.

I could do this all day. Nothing Trump says is real or accurate — nothing. Even discussing his statements as if they’re mere off-the-shelf political lies serves to only normalize him when, in fact, what he’s doing is galactically destructive. The world has lost faith in America’s leadership or is losing it fast. Nearly 6 in 10 Americans believe Trump has gone bye-bye. Why? Because his fictitiousness is so completely obvious that we have no choice but to wonder whether he’s mentally fit to lead. (He’s not.) He seems to sincerely believe that his kooky outbursts and cartoonish threats sound legitimate when anyone with a brain knows he’s tilting at windmills — even some of his core supporters.

Congressional Republicans are excusing Trump’s loony behavior, for the moment, as the consequences of his being “new to the job,” arguing that his rookie stature is the source of his nonstop flailing. I’m all in favor of any excuses that underscore the president's massive incompetence, thanks. But the GOP seems to forget that Trump has acted like this for his entire career. He sculpts his own reality to compensate for his endless roster of inadequacies.

But before too long — and I hope this is true — the president and his supporters will be blindsided by reality. Sometime soon, Trump will be fully exposed for his part in the Trump-Russia attack whether as a willing participant or a conspirator after the fact, orchestrating the cover-up. No fairy tales from his Twitter feed will dig him out. The story has to end this way. Trump and all Trump’s men have to be held accountable, otherwise we might as well resign ourselves to believing our democracy is owned and operated by the Kremlin. We can’t allow Trump’s delusions to become American delusions. The bedtime story Trump is telling has to end and end the right way — or else.