Right-wing talk radio is still popular — but as a business model, it's melting down 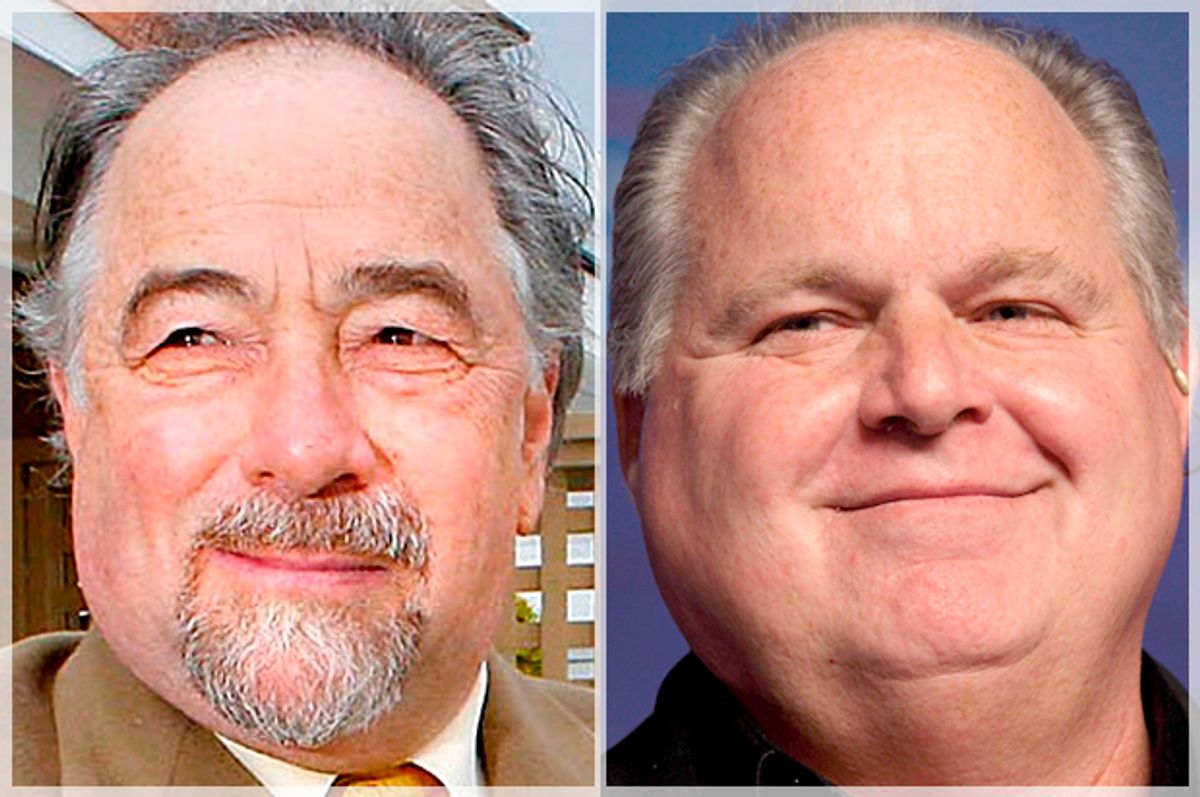 Cumulus Media, the owner of several hundred radio stations and the distributor of several big-name conservative talk shows, is facing financial difficulties as its larger industry is contracting. This is happening not long after Cumulus' rival iHeartMedia, formerly  known as Clear Channel and syndicator of both Rush Limbaugh's and Sean Hannity's radio shows, told the U.S. Securities and Exchange Commission it may be close to bankruptcy.

Both companies are carrying immense loads of debt. Since late February, Cumulus' stock has traded at less than $1 a share. As recently as 2012, its share price was close to $8. One of Cumulus' largest shareholders, hedge fund Renaissance Technologies, recently divested a significant portion of its stock in the company.

Renaissance Technologies is the investment vehicle of conservative mega-donor Robert Mercer, who is known as a supporter and patron of President Donald Trump as well as his senior adviser, Steve Bannon.

The hedge fund's pullout may have happened because Cumulus recently adopted a "poison pill" stock structure designed to dilute the value of the company's stock in the event that any single investor purchases 4.9 percent of the company on the public market. That strategy was likely intended to fend off bottom-feeding capital groups that specialize in purchasing companies and selling off their assets for a profit. Bain Capital, the former employer of the Republican Party's 2012 nominee, Mitt Romney, is a large stakeholder in iHeartMedia.

Cumulus owns several of the nation's largest radio stations, including KABC in Los Angeles and WABC in New York. That sizable asset portfolio, coupled with the company's low stock price, could well make it an attractive target to such predatory capitalists.

For the last several years Cumulus has been in a bitter competition with iHeartMedia, the nation's largest radio company. In April, iHeartMedia informed the SEC it might need to file for bankruptcy in the near future. The company also began laying off staff in some markets as some of its billions of dollars in bonds are beginning to mature.

iHeartMedia distributes the industry's top-rated programs, the Limbaugh and Hannity call-in shows, but both recently have taken a hit after Cumulus removed them from its stations, allegedly over controversial comments made by their hosts. Cumulus' Westwood One division, however, syndicates shows with Michael Savage, who is even more inflammatory than Limbaugh or Hannity. The company also distributes several sports shows as well as talk programs featuring liberal Stephanie Miller and conservative Mark Levin.

Radio as a whole has struggled in recent years as revenues have remained stagnant or declined as many advertisers have found that radio spots do not provide much more value than internet buys, which have traditionally been much less expensive.  The radio business has tried to follow suit with web-based streaming and other online platforms to better serve listeners and advertisers.

Radio as a medium remains popular, however. According to a 2016 Pew Research Center report, more than 90 percent of the Americans surveyed said they had listened to radio via an online or broadcast form in a given week.

Revenues for political talk radio have taken more of a hit compared to other formats such as music and sports as a number of major advertisers have also been fleeing the programs of political radio hosts under pressure from left-leaning activists who have been complaining to ad buyers when hosts make controversial remarks. As these companies have reduced or eliminated their sponsorships, many of the national conservative programs have taken money from activist groups to stanch the financial bleeding. According to the Wall Street Journal, advertising during political shows costs less than spots that air during non-political programs.

Conservative talk radio is in particular trouble because its audience is overwhelmingly older and the format is having difficulty trying to attract younger listeners who aren't as interested in angry, Christian conservatism.

"America is changing and conservative talk hosts believe they can stop it. They can’t. It is no longer the world of aging, white Baby Boomers, which I’m one," veteran radio personality Darryl Parks wrote last year shortly before Election Day.

"Our destiny is now in the hands of the Gen X’ers and Millennials. American society reflects their believes and desires. Conservative talk radio should be reflecting and speaking with the younger generations to survive, but have mistakenly chosen to double-down with an aging demographic providing no future for the format, that if done correctly would be viable."

According to industry website Radio Ink, Cumulus' Westwood One division's revenues were down 12.3 percent in the last quarter of 2016, despite an influx of political advertising. By contrast, revenues for Salem Radio Networks, which features less inflammatory conservative programming, saw a 12 percent increase quarter over quarter.

It's not clear who might emerge to attempt a hostile takeover of Cumulus but one possible bidder is the company's former chief executive Lew Dickey. He appears to be in the market for a media company and has managed to attract more than $200 million in investments for a new firm that is eager to make acquisitions.