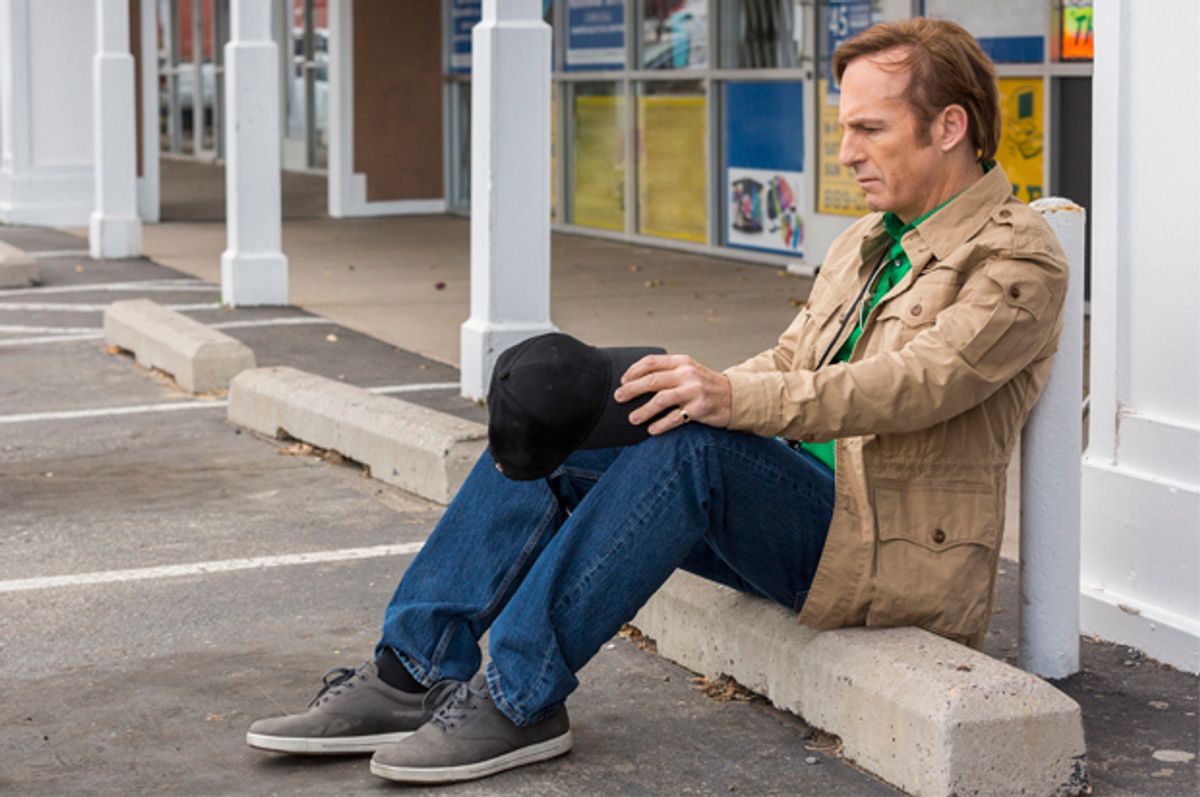 The biblical tale of Cain and Abel is a universally accepted and somewhat trite shorthand for describing sibling rivalry. But to understand the dynamic that can lead to a destructing hatred between brothers such as Chuck and Jimmy McGill of AMC’s “Better Call Saul,” it helps to read the actual story.

For the sake of those who may have forgotten the details or never read the tale in the first place, Cain “worked the soil” while Abel “kept flocks." This means that Cain engaged in hard, sweaty physical labor while Abel hung out with fluffy animals. When both brought offerings before God, the Almighty is said to have looked favorably upon Abel’s “fat portions from some of the firstborn of his flock.” Who can blame him? Meat rocks.

But God took a gander at Cain’s fruits and veggies platter and said, in so many words, “Thanks but, uh, hard pass.” Cain reacted to this by leading Abel out to a field and killing him, after which God marked him so that he could never be executed for his sins. Even in ancient times, living a long life in disgrace can be a worse fate than death.

“Better Call Saul” tells the story of Jimmy McGill (Bob Odenkirk) and his transformation into Walter White’s criminal attorney Saul Goodman, and knowing that Saul plays a central role in “Breaking Bad” removes any guessing games as to whether the character will die. In fact, in addition to recounting the story of his moral degeneration, series creators Vince Gilligan and Peter Gould grant viewers a glimpse at the years following the events of “Breaking Bad,” when the character is known as Gene.

But in this colorless future, Jimmy McGill doesn’t exist. We now know that is in large part due to his brother Chuck's having murdered his good name in a slow, cruel character assassination playing out over the course of the drama’s third season. Chuck (Michael McKean) is the McGill who earned his success the “right” way, understand. He went to law school, studied endlessly and worked hard to become one of the best lawyers in his business. For a time he is his "brother’s keeper" (another stock phrase originating in that Bible story), prying him out of a legal scrape and securing him employment in the mailroom at his firm.

Jimmy seeks to thank Chuck by secretly taking law school courses online and passing the bar. He has hoped his brother would be proud enough to hire him at Hamlin, Hamlin & McGill. Instead Chuck thwarts his every attempt to get a leg up in his profession.  Even when Jimmy, working independently, lands a class action that stood to net the firm millions — and even though Jimmy had cared for his brother through his delusional “electromagnetic hypersensitivity” — Chuck pushed him down. Chuck worked the soil, and never wants Jimmy to forget that.

In scrupulously dissecting the deterioration of Chuck and Jimmy’s relationship, the producers of “Better Call Saul” have molded a new kind of scripted hour — not a family drama but one whose themes are profoundly wedded to family issues and darkness. One could describe its predecessor and other "platinum age" dramas thusly, given that the central figures of “Mad Men,” “The Sopranos” and “Breaking Bad” were fathers and family men as well. But the lives of Don Draper, Tony Soprano and Walter White had with their wives and children existed separately from their business dealings, whether legal or criminal. Their decisions and personalities affected their families more than the other way around.

“Better Call Saul,” on the other hand, proves that Jimmy McGill, (along with every identity due to emerge in his future) is a creature twisted by his own blood — his brother Chuck specifically, but also his father and mother. Jimmy lacked respect for his father’s kindly nature, which made him an easy mark for lowlifes and con men. But instead of helping his father, Jimmy took advantage of his weak spots and honed his own grifting skills. Chuck watched this happen as they grew up together, resenting his mother’s unconditional affection for his younger brother. And when Chuck remained beside his mother’s deathbed, his steadfast dedication was rewarded when he heard his mother call for Jimmy with her dying breath

McKean spoke to the source of the rivalry between the McGill brothers in an interview with Salon’s Alli Joseph as this season began.  “I think this is a classic case of ‘Mom liked you best,'” he said. “Here’s the dichotomy: I made Mama proud; Jimmy made her laugh.”

Much of the current season follows the fallout from Chuck's making public a secret recording of Jimmy admitting to a felony related to a case, first to have his brother arrested and then to seek his permanent disbarment. Chuck patronizes Jimmy by explaining that this is for his own good.

What the elder McGill doesn’t predict is that Jimmy isn’t content to lie down and accept his older brother’s efforts to keep him in his place: In front of a board of his peers at a disciplinary hearing, Jimmy exposes Chuck’s psychological fragility. Jimmy’s license is merely suspended for 12 months. But the soon-to-be Saul’s payback doesn’t end there. Later Jimmy pays a visit to the insurance company that's related to his malpractice coverage and he surreptitiously drops hints regarding his brother’s emotional instability. This, in turn, gets back to the firm and leads Chuck’s partner Howard Hamlin (Patrick Fabian) to gently attempt to push him out.

Chuck and Jimmy’s caustic relationship is merely one aspect of “Better Call Saul” that makes it stand out from other dramas about good men gone bad; where desperation emboldens other antiheroes to exercise acts of calculated might, it makes a craven manipulator out of Jimmy. By this season’s penultimate episode, Monday night’s “Fall,” Jimmy has maneuvered innocent grannies into turning against one of their own to speed up a settlement that stands to net him seven figures. In a prior episode, "Slip," he fakes a slip-and-fall accident to settle the balance of prepaid commercial time at a station that he can no longer use — a ruse he recycles to blackmail his community service supervisor into allowing him to lie down on the job (and get a fellow lawbreaker released, netting him another payday).

These penny ante cheats are far from glorious, though; at the end of the day, Jimmy’s still a guy lying down in the dirt, surrounded by trash and fellow lawbreakers shuffling their way through community service.

By the end of “Fall,” Jimmy is done with Chuck, done with trying to play it straight and flat on his back. The only person he has left in his corner is his partner and friend Kim Wexler (Rhea Seehorn), who is just shy of killing herself to hold her career and their professional partnership together. The final moments of the episode depict how near she may be to calling it quits on Jimmy, too, for her sanity’s sake and to preserve her health.

Prior to the third season's debut, the major teaser that Gilligan, Gould and the stars of “Better Call Saul” dropped indicated that the audience would at long last get a first glimpse at Saul Goodman. The writers made good on that promise, but seeing the carnival barker personality realized as a cheeseball commercial pitchman turns out to be far less relevant to the story of the character’s moral decline than witnessing the circumstances of his original identity’s steady, anguishing dissolution.

As “Better Call Saul” looms ever more closely to irreversibly shutting the door on Jimmy McGill, it’s also doing a tremendous job in depicting the difference between merely having nothing to lose and having nobody to disappoint on top of that — a truth that dates back to the Old Testament.