For Shakespeare, the Trump-stabbing "Caesar" would be business as usual

One way or another, the playwright always found a way to criticize the monarchy and "speak of the death of kings" 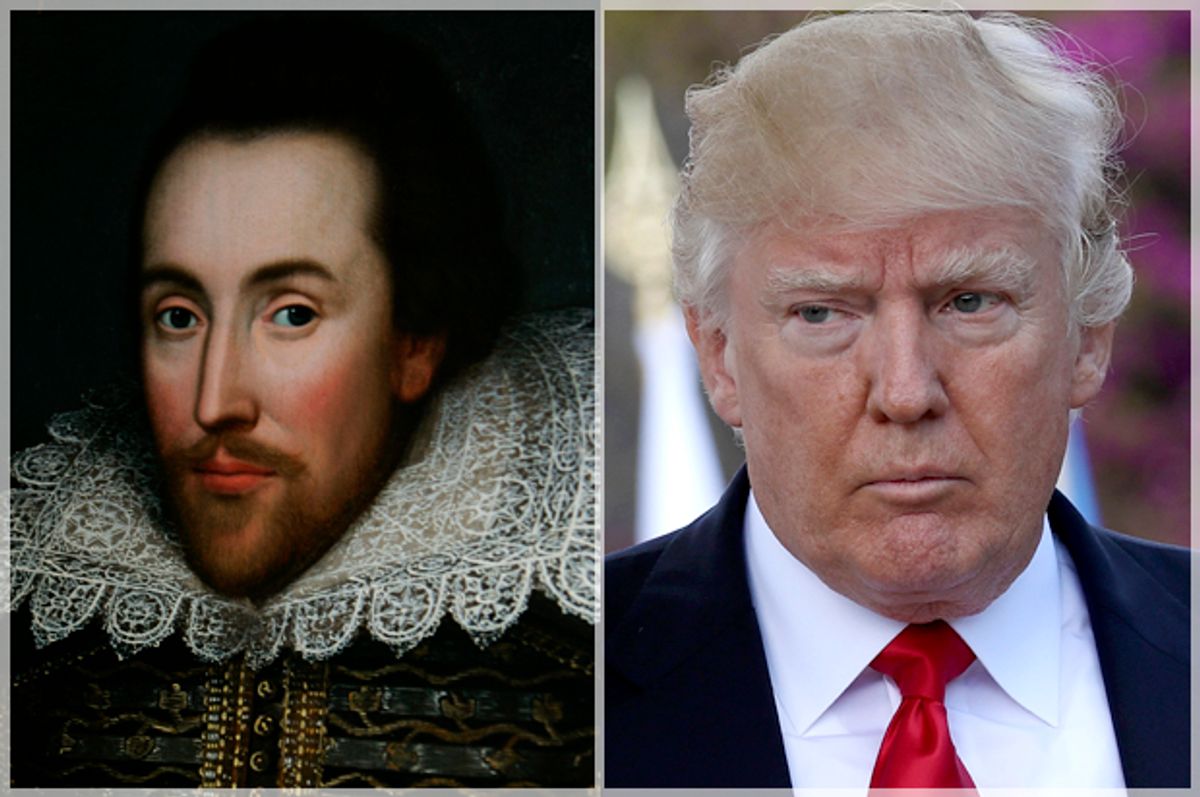 I waited in line for four hours (in the drizzling rain and pregnant, no less) to see the Public Theater’s recent production of “Julius Caesar”at Shakespeare in the Park.

At the time, I had not heard about the production’s modern take on Julius Caesar as Trump, but I did suspect that they would take some kind of contemporary approach, given the play’s themes of political upheaval, the role rhetoric and media play in public opinion, and (un)justified violence. It's a theme some people are already connecting to the recent shooting of a Republican congressman. Many have responded positively to the Trump-as-Julius-Caesar adaption. Others have found it inappropriate (Delta and Bank of America recently pulled their sponsorships over the controversy.)

Regardless of the sweep of responses, it is important to note that what the Public did — adapting a historical play to comment on a contemporary ruler — is nothing new. In fact, it was precisely what Shakespeare was in the business of doing.

During Shakespeare’s lifetime, Queen Elizabeth, her successor, King James, and various members of the nobility all sponsored theater troupes, who put on public and private performances. Those sponsorships were similar to what Delta, Bank of America and others offer today, though they also suggested a sort of reciprocity between the patron and the playwright. In England, the monarchs and nobles also held the licenses to play, without which actors could not perform, and they had significant control over the official censor, known as the “master of the revels."

Technically, it was illegal to portray a living monarch onstage at all, as rulers feared that the portrayals would not be flattering. To allow actors and playwrights to have such control over their public personas — personas that, believe it or not, were even more crafted and guarded than those of most rulers today — was simply too risky.

Consequently, all plays were vetted by the master of the revels. If a troupe performed an unlicensed or censored play, a hefty fine or jail time ensued. In just one example, a contemporary author of Shakespeare’s time was sent to the Tower for “fetch[ing] a storie 200 yere olde, and publish[ing] it this last yere, intendinge the application of it to this tyme.” (Only one of Shakespeare’s plays was not licensed, one about Sir Thomas More that was likely censored because of its too-true-to-life depiction of public riots.)

So something like the Public’s staging of “Julius Caesar” and its obvious application of its era would never have gotten past the censor back then and, if it had somehow been played unlicensed, extreme punishments would likely have ensued.

Censorship and the threat of punishment, however, didn't mean that playwrights of the Tudor period never commented on living monarchs onstage. As said above, this was actually Shakespeare’s business.

One of Shakespeare’s most common circumventions of these rules was to write and stage a history play (one that deals with a historical figure, usually a king) but to shape the storylines so that audiences and sometimes the monarchs themselves would recognize that the play is about them. (This was the Public’s very approach though it is much more heavy-handed than Shakespeare’s productions.)

“Richard II” serves as a particularly enticing example of political commentary, given that a handful of noblemen ordered it to be performed days before their failed political intervention (mistaken for a coup) over some of Elizabeth’s political decisions. The ringleader of the group, the earl of Essex, along with several others, were later caught, convicted of treason and brutally executed.

Even the publication history of “Richard II” bears the marks of an uneasy relationship with the queen. First performed sometime around 1595, the play includes what’s known as “the deposition scene,” in which Richard II gives up the throne to his upstart cousin, the soon-to-be Henry IV. (There are strong parallels between this deposition scene and what was attempted by the earl of Essex and his men).

This is just one of many examples of Shakespeare’s nods to Tudor politics. In “A Midsummer Night’s Dream,” the fairy queen Titania — referring to two nicknames for Elizabeth — falls in love with a donkey. “Hamlet” opens with men standing guard against an unseen enemy just months after much of England mustered in London to defend the city against a rumored but never seen Spanish armada. Even the rowdy crowds and decaying republicanism of “Julius Caesar” harken to contemporary riots and England’s teetering systems of rule.

Shakespeare didn’t stop his commentary at Elizabeth’s death, either. Although King James was his direct patron (Shakespeare wrote for his troupe, the King’s Men), the playwright referenced the monarch in “Macbeth” in subtle but marked ways.

There are two characters in the play that could be analogs for James. The first is Banquo, the upright and insightful companion to Macbeth who is later unjustly murdered. In Act 1, Scene 3, Banquo receives a prophecy from the play’s famed witches suggesting that his progeny will be heirs to Scotland’s throne. King James, a direct descendent of the historical Banquo, would seem to represent the fulfillment of that vision. Shakespeare even drives this point home by having Macbeth bring a mirror onstage when he mysteriously sees Banquo’s heirs. James’ reflection completes the royal line. In this way, Shakespeare flatters the king and affirms his divinely appointed rule on the throne.

But James also eerily resembles Macbeth. James was notoriously interested in witchcraft, publishing his own book on the matter, “Daemonologie,” and he took witches and prophecy at least as seriously as the play's title character.

More directly, Lady Macbeth tells Macbeth to “look like the innocent flower, but be the serpent under't,” a reference to James’ emblem of a serpent under a flower. If James is seen as Macbeth, the depiction is far less flattering, as a power-hungry, illegitimate tyrant leading his country into destruction.

So as corporations, politicians, and audiences wrestle with larger questions regarding the role of the theater and contemporary politics, let us remember that they — and we — wrestle just like those who have gone before us. The Public’s “Julius Caesar” is simply one more instance of theater’s always-contemporary and always-complex, real-life resonances.