Lessons of the "baseball shooting": Gun violence feeds on itself — and even now Republicans won't listen

Guns are largely marketed to right-wing male power fantasies, but this latest tragedy shows that no one is immune 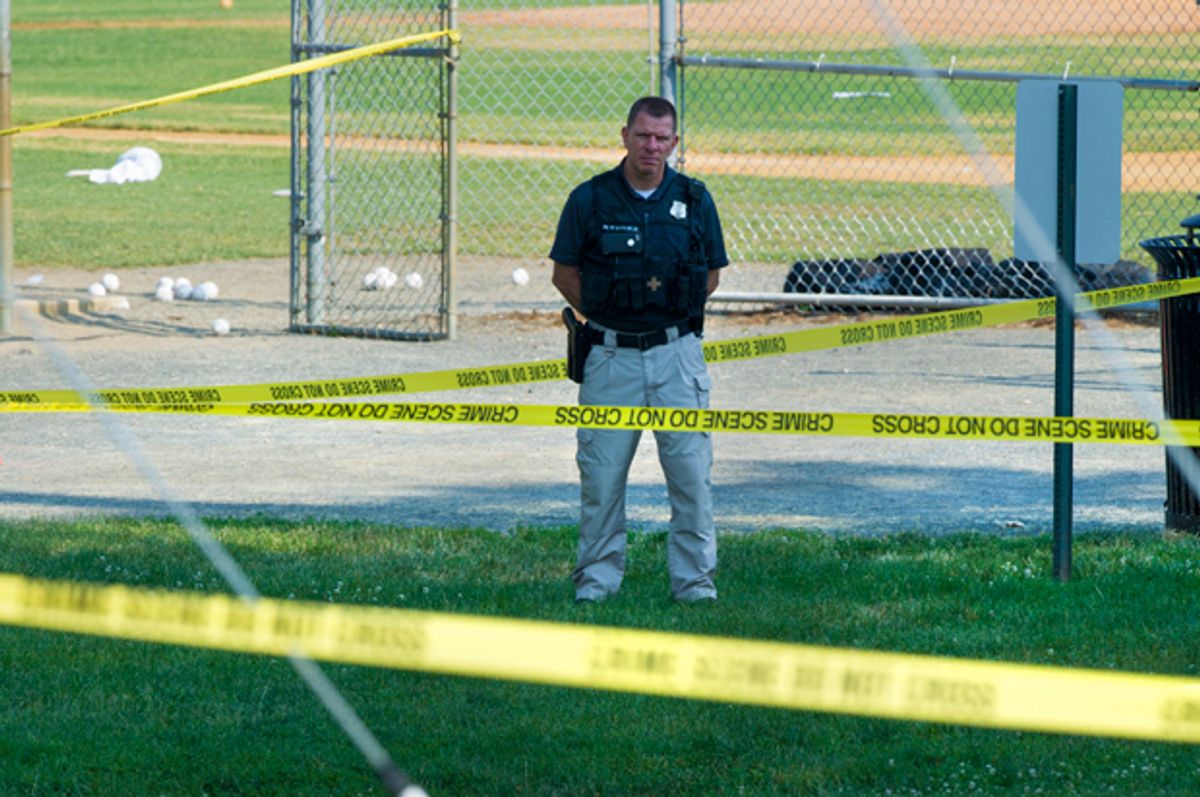 Wednesday's terrifying assault on a group of Republican congressmen at baseball practice demonstrated that no one is protected from the violence that plagues a country where gun industry profits and culture-war politics have turned guns into fetish objects and have made reasonable gun-safety policies nearly impossible to enact. No one is spared, not even those who have done so much to make it easy for any madman with a vendetta to get the weaponry he needs to rain the sort of havoc that was visited on a bucolic park in Alexandria, Virginia, in the early hours of Wednesday morning.

Early reports indicate that the suspect, who was apparently shot and killed by police, was a 66-year-old Belleville, Illinois, man named James T. Hodgkinson. His social-media presence was almost wholly devoted to loathing Donald Trump and exalting Sen. Bernie Sanders, and reports have suggested he worked as a volunteer for Sanders' 2016 presidential campaign.

The left-wing views of the alleged shooter might be surprising to some, but they shouldn't be. The gun industry and the National Rifle Association market guns with promises that owning guns will make a customer feel manly and powerful, and that fantasy has a power that can transcend political boundaries. And no one knows better than gun industry leaders how feelings of political frustration caused by seeing your preferred candidate lose an election can be channeled into a pitch to buy more guns.

Exactly a year ago today, in response to the shooting at Pulse nightclub in Orlando that left 49 people dead, I wrote a piece for Salon that touched on how the gun industry uses political grievances as a hook to convince people to buy more guns. Back then, of course, we had a Democratic president in office. During Barack Obama's administration, the gun industry was able to move huge numbers of weapons off the shelves by convincing paranoid, resentful white conservatives that the black president was coming to take their guns away.

This is not conjecture. Last year Smith & Wesson released a report celebrating the effect that having a Democrat in the White House — which in conservative voters provokes feelings of resentment and frustration — had on their gun sales. The following is a slide from the company's report. The election of President Donald Trump empowered conservative Americans. That, too, has had an impact on gun sales, dubbed by CNN Money the "Trump slump." With Trump in office and sticking it to the liberals, the main base of gun customers, angry reactionaries, has been less inclined to dump thousands of dollars of overcompensation money on deadly hardware.

Gun marketing, helped along by the political messaging of the NRA, , is targeted largely at conservatives. That said, the emotional buttons being pushed — the wish to feel powerful, the desire to prove one's masculinity, the appeal of violence as a political shortcut — cannot be contained by something as pedestrian as political partisanship. Through years of marketing and cultural messaging, the appeal of guns has been crafted into something totemic, even primal — desired by all manner of people who yearn for some kind of cleansing violence to solve their problems.

Around the time of Trump's inauguration, a debate emerged in leftist circles about the value of political violence, particularly after an anonymous person punched white supremacist Richard Spencer in the face on camera on Inauguration Day. While I strongly relate to the desire to lash out at people who would dismantle our democracy in the name of white nationalism, I've been persuaded by friends and allies, especially journalist Dave Neiwert of the Southern Poverty Law Center, that political violence is always a bad idea. Not only is it wrong but it tends to backfire, creating the pretext for the violent suppression of liberal or leftist ideas.

Already there are right-wing street gangs forming, eagerly looking for an excuse to lash out against anyone they perceive as being on the left. Already there's been a shooting of a left-leaning protester — who by all accounts was trying to restore peace — by right-wingers who seemed to be out for blood. Already two men have been killed, and a third was badly injured by an unhinged reactionary and white supremacist who claims he was acting in self-defense because the three men tried to interfere with his verbal assault on two women of color. There is every reason to believe that the baying alt-right wolves cannot wait to use this shooting as an excuse to escalate their efforts at using violence to quell liberal dissent.

And when it comes to the Republicans, sadly there is no reason to believe they will react to this dreadful crime by rethinking their resistance to saner gun control laws that could go a long way toward minimizing the amount of damage that people disposed to carrying out violence can do. Despite watching their friends and colleagues running away from a hail of gunfire, Republican politicians and pundits are sticking with the thoughts-and-prayers narrative and not even discussing taking steps to keep guns out of the hands of dangerous people.

The socialist writer Upton Sinclair had a saying he liked to trot out at public events: "It is difficult to get a man to understand something, when his salary depends upon his not understanding it."

That's why we cannot expect Republican politicians to learn from this event that it's a bad idea to make it so easy for random individuals to take life at will on a massive scale. It's not just the money from the gun lobby that blinds them, although that certainly doesn't help matters. It's that the cultural anxieties that both fuel gun mania and are fueled by it work to Republicans' benefit.

The NRA's stories about how scary black and brown men are about to bust down your door and kill your family are good for selling guns, but they were the also same narratives that helped propel Trump to the White House. If anything, the fact that a Bernie Sanders supporter apparently went nuts with a gun will increase the paranoia on the right, which in turn will only lead to greater attachment to guns.

Fears of emasculation, racist anxieties about crime, power fantasies about silencing dissent through threats of violence, and a widespread loathing for liberals and their insistence on rational evidence — all these things sell guns. They also get out votes for Republicans. The party cannot give up one without the other. And so we cannot expect that this spate of gun violence, even as close to home as it came for Republican elected lawmakers, will do anything to change their minds.